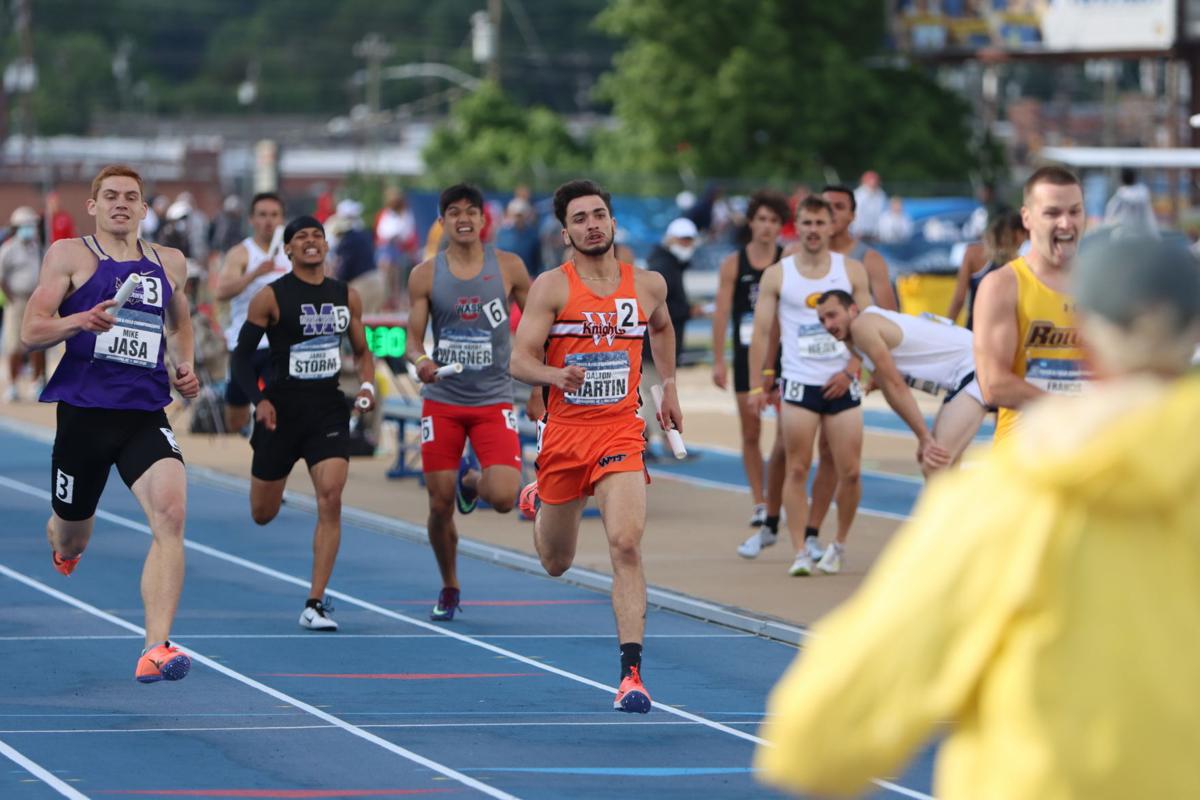 Wartburg's Dalton Martin, a United Township graduate, heads toward the finish line while running the final leg of the 1,600-meter relay that gave the Knights the NCAA Division III national team championship in Greensboro, N.C. on May 29. 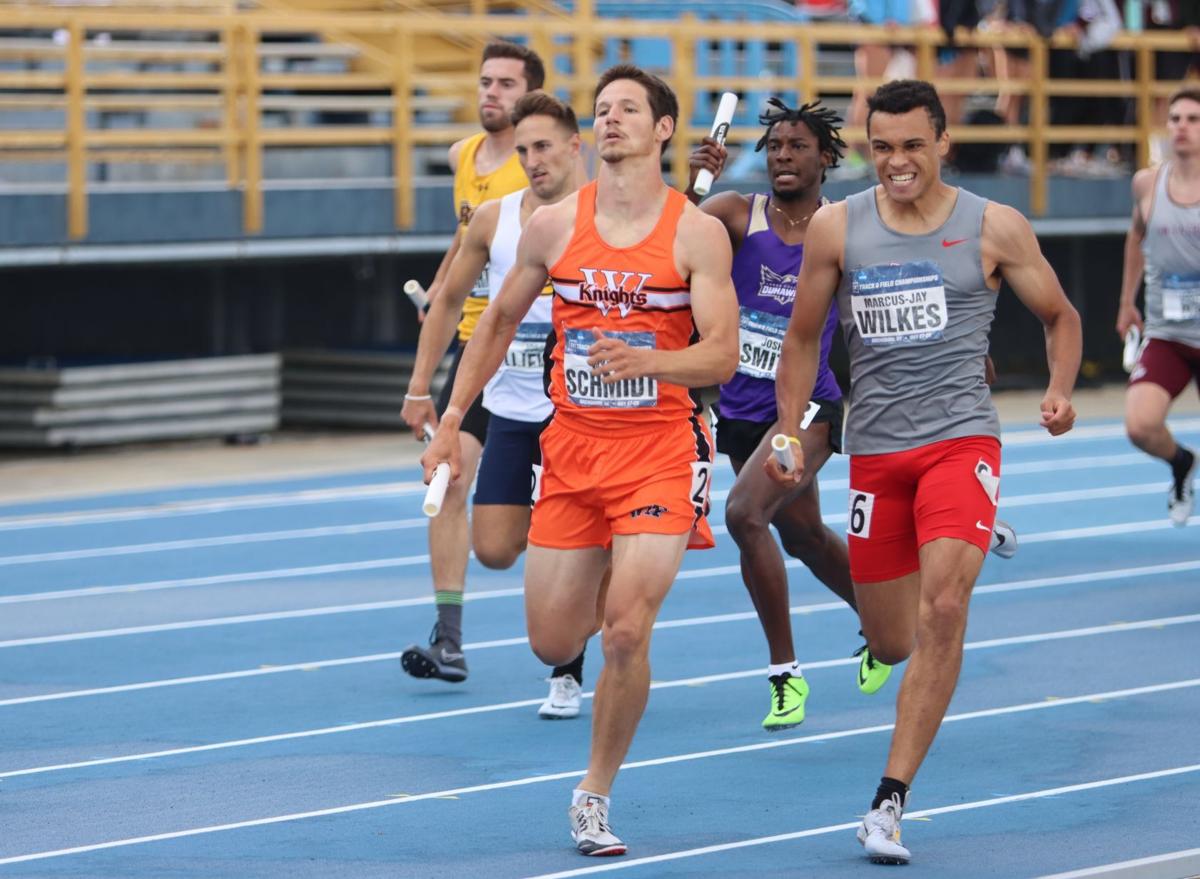 They knew what they had to do.

Entering the final race of the NCAA Division III men’s track & field season, the only thing that stood between Wartburg and its first national team championship in the sport was the need to finish ahead of Wisconsin-Eau Claire in the 1,600-meter relay.

The two teams entered the final event of the meet in Greensboro, N.C., tied for first place and a pair of Quad-City area athletes had an opportunity to make a title-winning difference with the baton in their hands.

Wyatt Schmidt, a former Northeast athlete from Preston, was running the second leg in a relay that was anchored by United Township graduate Dalton Martin.

“Our distance guys in the 5K did a great job of putting us right where we needed to be going into the 4x4,’’ Schmidt said. “As we were in the holding area getting ready for the race, everyone was like ‘We can do this. We can make this happen.’”

Martin said the Knights’ goal from the onset was to bring home a team championship.

While things didn’t necessarily play out the way the team envisioned throughout the course of the meet, everything came together to put Wartburg in a good spot as the final events unfolded.

“To be there in that moment knowing what we could accomplish, something we had worked toward all season, it was an incredible feeling,’’ Martin said. “We all knew what we had to get done and coach (Marcus) Newsom had prepared us to get it done.’’

Wisconsin-Eau Claire started with the fastest opening split, but the Knights’ Dallas Wright, a junior from Carlisle, Iowa, delivered a clean handoff to Schmidt who quickly gained ground with the second-fastest second split at 48.606 seconds.

It was an effort that pushed Wartburg in front of Wisconsin-Eau Claire as Schmidt prepared to hand off the baton to Derrick Smith, a freshman from New Orleans.

“There were some nerves,’’ Schmidt said. “In your head you’re thinking, ‘Don’t drop it, get the handoff down.’ All the little things. The handoff was better than in the prelims and when I had it, it was time to just go.’’

Schmidt said his first 200 meters weren’t his best, but he was able to surge over the next 150 and pull ahead of the Wisconsin-Eau Claire runner in the final 50 meters as he prepared to hand off to Smith.

In the third leg, Smith added a second to Wartburg’s edge over the team the Knights needed to beat.

His work positioned Martin to take the baton with a lead, battling eventual champion Rowan and American Rivers Conference rival Loras for the lead heading into the final 400 meters.

“Taking the handoff from Derrick, running the final leg, I knew going into it that the power to get it done was in my hand,’’ Martin said. “When you’re running the anchor leg, it’s up to you to finish the job.’’

It had been a tough race already and Martin didn’t expect that to change.

“That last 400, everybody was going at it as hard as they could. It was the final race of the season for everybody,’’ Martin said. “Derrick gave me a good handoff and I just went out as hard as I could.’’

Martin crossed the line with a split of 48.212 seconds and while Wisconsin-Eau Claire shaved more than a second off of Wartburg’s lead over the final 400, the Knights’ time of 3 minutes, 12.461 seconds was good enough for third place in the race.

Wisconsin-Eau Claire ended up in fifth in a national championship that was decided by a margin of .542 of a second in the 1,600 relay.

“To do something that had never been done at Wartburg by the men’s track program – win a national team championship – that was an incredible feeling,’’ Schmidt said. “Coach Newsom does a good job of telling us what we’re capable of, getting us to believe that we can do something special.’’

The results are reflected in a sizable number of records the Knights set in a unique season.

In the 1,600 relay alone, Wartburg recorded four of its top-10 times ever in the event over the course of the season.

Returning all four members of the relay next season, the Knights will work to climb the podium in the relay next spring but will do so as part of defending national championship team.

“Together, we did something special,’’ Schmidt said.

Hawkeyes latest commit is part of the family

Iowa's latest football commitment was 'born and raised a Hawkeye'

Fans attending Iowa home football, basketball, wrestling, baseball and softball games will be able to buy a beer or wine while watching the Hawkeyes.

Rebraca isn't Garza but there are similarities

While Iowa transfer big man Filip Rebraca is unlikely to be as productive as Luka Garza, there are some similarities between the two.

Iowa's Will Daniels of Geneseo and Northern Iowa's Darius King of Moline earn all-American honors at the NCAA Division I Track and Field Championships.

Prince: Illini's Williams is one of a kind

Isaiah Williams' decision to move to receiver for Illinois instead of transferring makes him unusual in today's college football world.

Iowa senior Will Daniels of Geneseo wants a record-setting Big Ten performance to be a springboard in NCAA decathlon competition.

Over the past two weeks, the University of Illinois men's basketball team has struck out landing a transfer 4-man. Tre Mitchell from UMass app…

Wartburg's Dalton Martin, a United Township graduate, heads toward the finish line while running the final leg of the 1,600-meter relay that gave the Knights the NCAA Division III national team championship in Greensboro, N.C. on May 29.