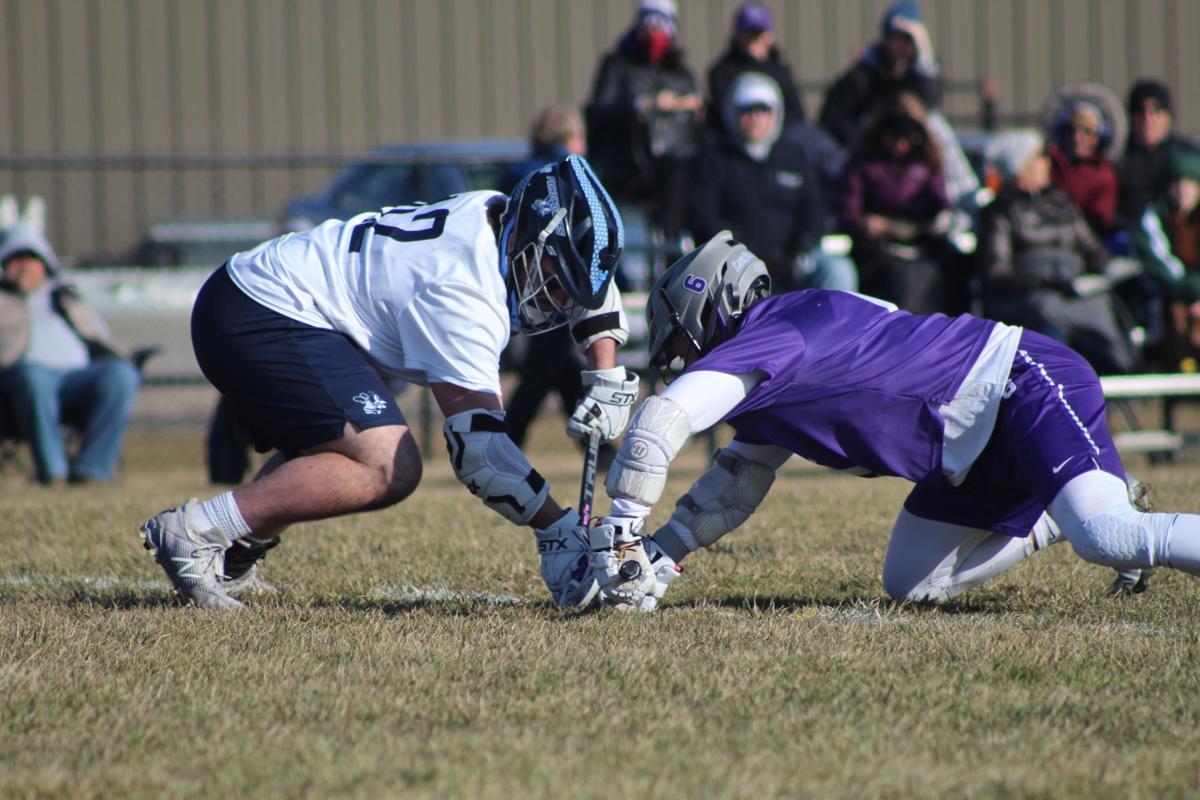 St. Ambrose midfielder Hunter Northway, left, a senior from Ankeny Centennial who ranks among the best in the NAIA in faceoffs, battles for the ball during a recent Fighting Bees men's lacrosse game. 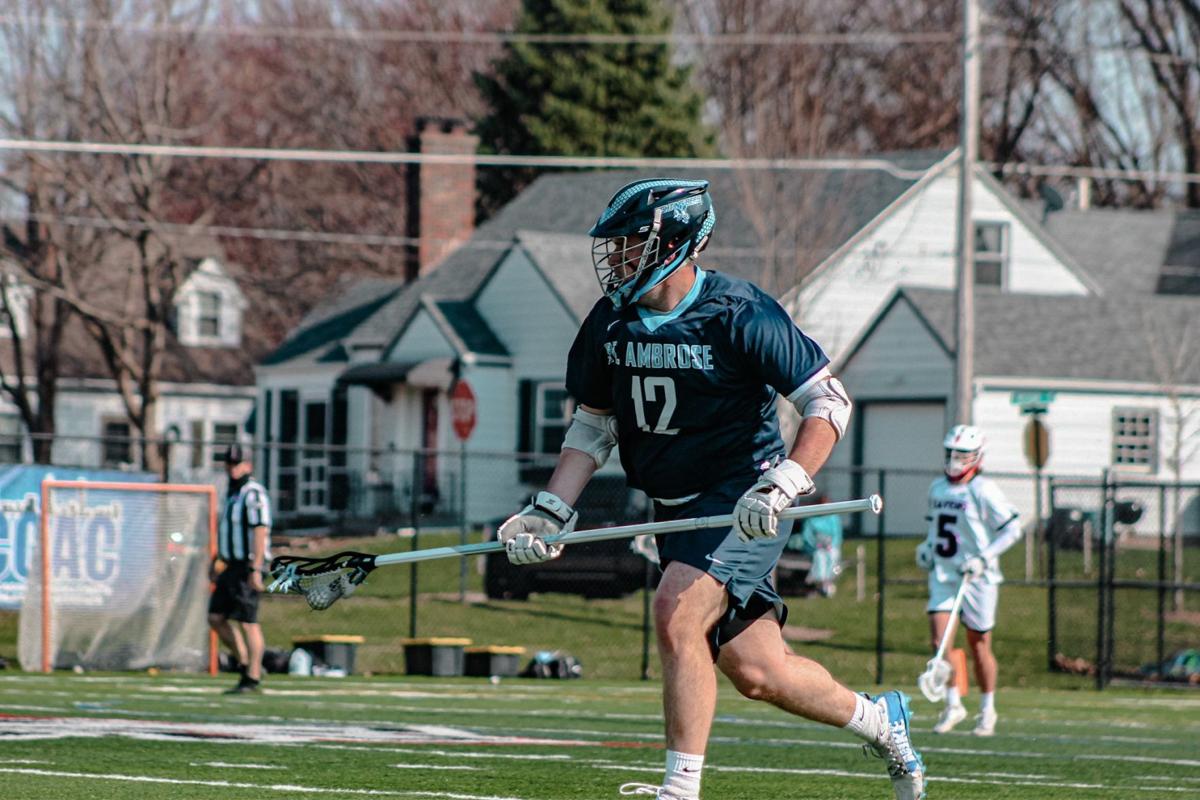 Gavin Flynn, a defender on the St. Ambrose men's lacrosse team from Chicago Brother Rice, is one of two fourth-year seniors who have helped the Fighting Bees reach the NAIA national tourney for the first time ever.

In their four seasons on the St. Ambrose men’s lacrosse team, Gavin Flynn and Hunter Northway have seen it all.

That makes the Fighting Bees’ first-ever appearance in the NAIA national tournament this week that much more meaningful for the only senior survivors from a recruiting class that initially numbered more than a dozen players.

“We’ve come a long way, a really long way," said Flynn, a defender and co-captain of a St. Ambrose team that ranks fifth nationally heading into a national quarterfinal match-up against fourth-ranked Keiser on Thursday in Savannah, Ga.

Northway, a midfielder and co-captain from Ankeny Centennial, and Flynn have played for three head coaches, including an interim coach for most of their sophomore season, while watching the players they entered the program with leave the team or leave the sport.

“When I was a freshman and sophomore, we were a team that had a tough time doing passing drills,’’ Northway said. “We won a few games, but most of them weren’t pretty.’’

These days, things are going pretty well for St. Ambrose.

The eighth-year program won its first-ever game against a ranked opponent a year ago, defeating Siena Heights 15-13, and followed that by beating another, getting past Madonna 8-5.

The Fighting Bees were 5-1 last year before the onset of the COVID-19 pandemic brought the season to an early end.

“The win at Siena Heights, I felt we were a little flat going into that game and we gave up some scores early but the young guys on our team — and we’re still a young team with some great young talent — kept it together and brought us back,’’ Flynn said.

“From that point on, things haven’t been the same. We believe now and it shows in how we prepare and how we compete.’’

St. Ambrose has continued to build on last season’s taste of success, constructing a 13-3 record including a runner-up finish and 8-1 mark against competition in the Kansas Collegiate Athletic Conference.

The Fighting Bees are 5-3 this season against teams that were either ranked or receiving votes in the NAIA national poll. St. Ambrose has been ranked as high as fourth during the second half of the season.

The progress has been a collaborative endeavor that has evolved over the past two seasons, including a buy-in from players as well as a coaching staff led by Rogers that includes two third-year assistants, Jon Paul and Alex Malinowski.

“There has been a cultural change and a change in dynamics and the way things are done,’’ Rogers said. “It has involved a lot of work on the part of everyone in the program and that has led to a change in chemistry.’’

Rogers, who spent five years as the coach of a new NCAA Division II women’s program at Montevallo in Alabama, found a lack of discipline and a lack of leadership in the Fighting Bees’ program he took over in May of 2019.

“Things had kind of been flying by the seat of their pants and the idea was to bring in an older coach to put some structure in place,’’ Rogers said. “The guys bought into what we were asking and result has been a change that has been reflected on the field. The players have earned this.’’

In Northway and Flynn, Rogers has examples of how players have grown and developed.

The only Iowa native on the Bees’ roster, Northway took up the sport during high school. He found it to be a perfect complement to his other primary sport, hockey.

“Initially, I took up lacrosse because it gave me something to do in the spring but I quickly found a lot to like about the game,’’ Northway said.

“I liked the physicality of it and the finesse that comes with the game. One minute, you’re making a silky smooth shot and the next, you’re running a shoulder through someone’s chest.’’

Rogers said Northway has developed into one of the better faceoff competitors in the NAIA because of the work he has put into his game.

“Hunter is constantly working on his faceoff skills and from where he started, with minimal experience in the game, he’s made tremendous strides,’’ Rogers said.

“… Gavin, his growth has been as a leader. He’s more vocal and his leadership is every bit as needed as the improvement we’ve seen on the field.’’

Flynn, a product of the program at Brother Rice High School in Chicago, has been playing the game since eighth grade and he joined the Fighting Bees hoping to be a part of what is taking place now.

“It felt like the program had a chance to grow and with the recruits that have come in the past few years, things keep getting better,’’ Flynn said.

Balance has been important for the Bees all season.

“We have so many athletes,’’ Flynn said. “We’re not the type of team where people can concentrate on stopping one or two guys. You shut one down, somebody else is waiting in the wings to step up’’

The task now becomes to take that next step as St. Ambrose prepares to face Keiser, a 6-2 team that competes as an independent, in a noon quarterfinal on Thursday.

“People say we don’t belong. We don’t have a rep, so we go there with a bit of a chip on our shoulders,’’ Northway said. “We feel like we have something to prove.’’

St. Ambrose midfielder Hunter Northway, left, a senior from Ankeny Centennial who ranks among the best in the NAIA in faceoffs, battles for the ball during a recent Fighting Bees men's lacrosse game.

Gavin Flynn, a defender on the St. Ambrose men's lacrosse team from Chicago Brother Rice, is one of two fourth-year seniors who have helped the Fighting Bees reach the NAIA national tourney for the first time ever.