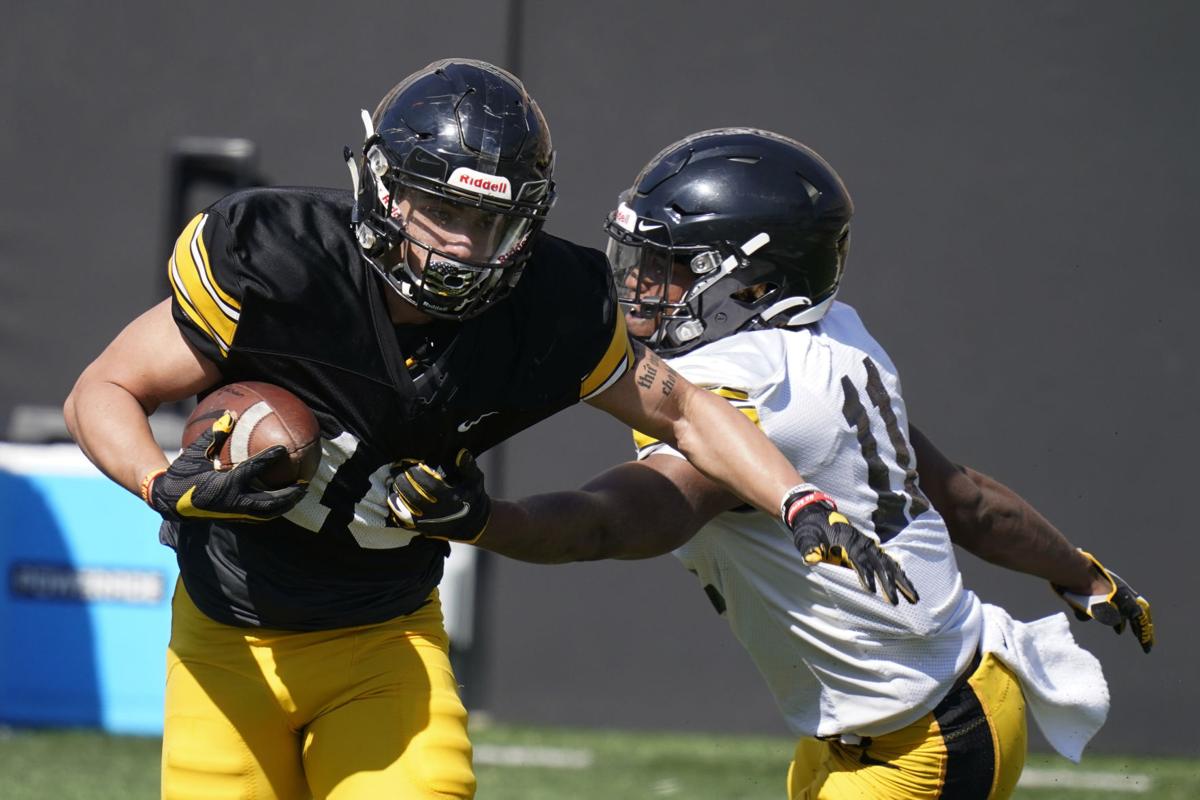 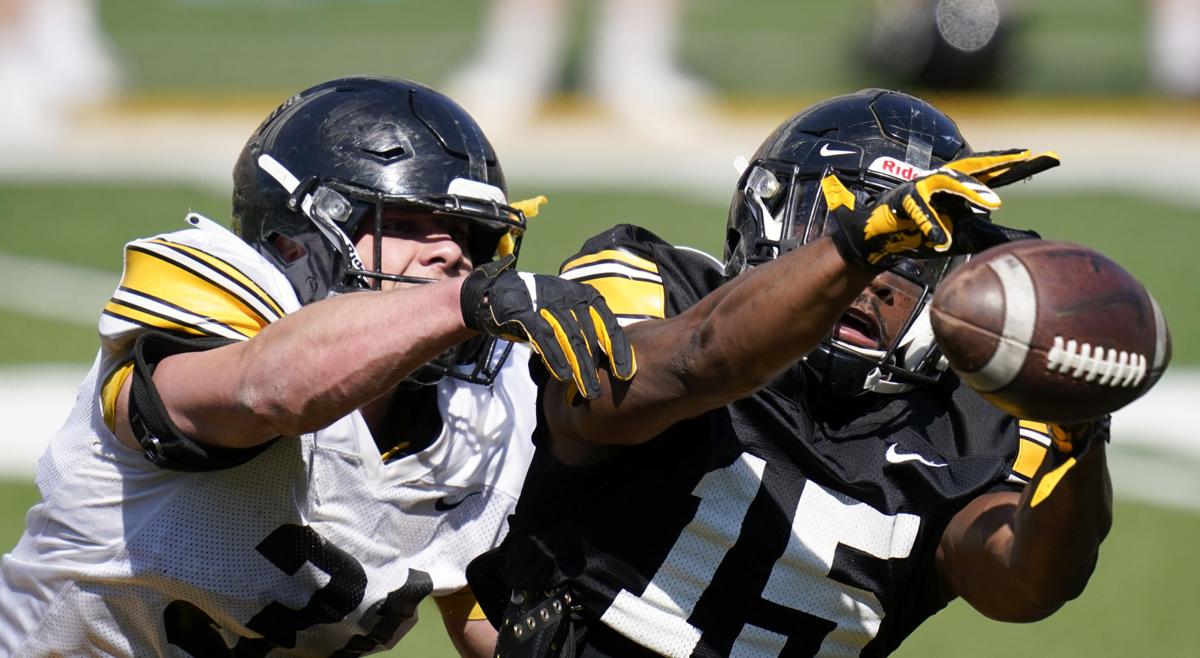 Iowa running back Tyler Goodson (15) catches a pass ahead of linebacker Jack Campbell (31) during practice Saturday in Iowa City. 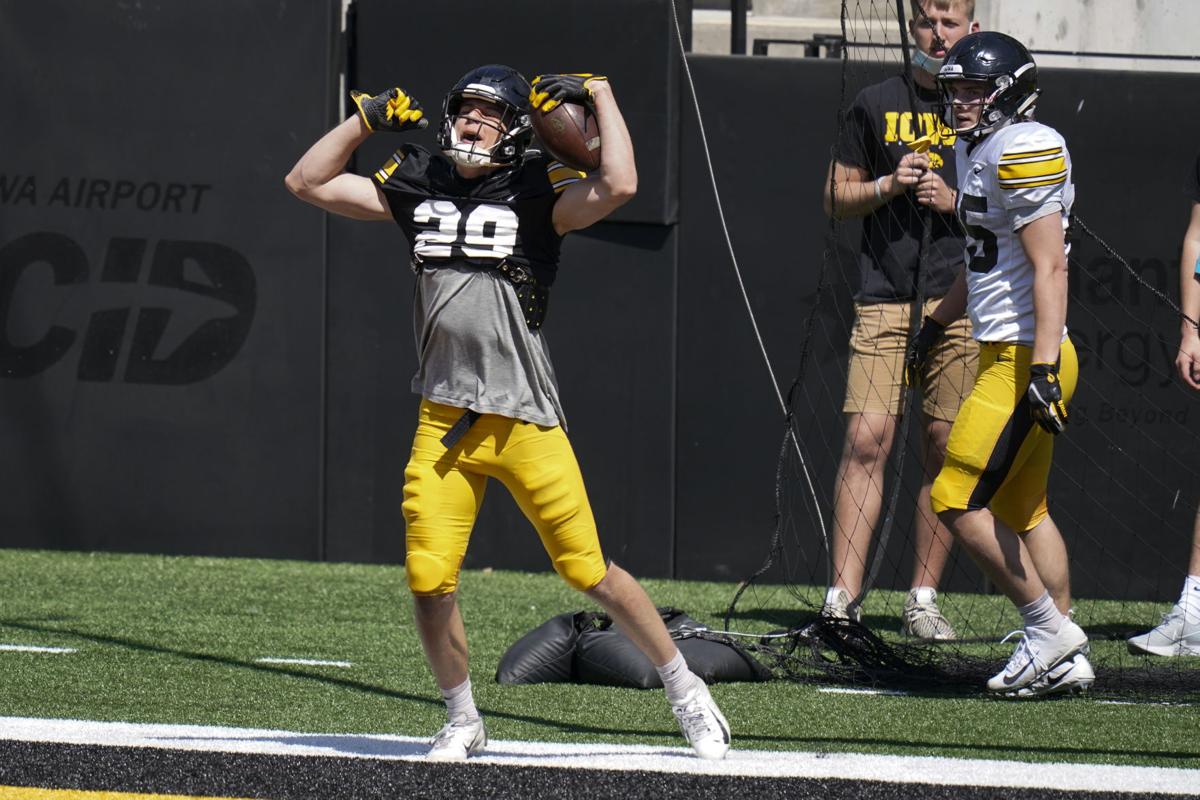 IOWA CITY — Jack Campbell walked off the turf Saturday at Kinnick Stadium confident that the University of Iowa football team had taken steps forward this spring.

The junior linebacker from Cedar Falls also knows that work remains to be done.

"The message from the start was, 'Let’s build it one day at a time, come out each day with intent,'" Campbell said following a two-hour workout in front of a crowd of around 4,000 at Kinnick Stadium. "Sometimes we’d have a sloppy practice, but we knew we can’t start stacking sloppy practices because then we’re not going to build, not going to have any consistency."

Campbell said the Hawkeyes had some good days and some rough-around-the-edges days, but he senses the momentum that coach Kirk Ferentz wanted to see from start to finish of Iowa’s 15 spring practices.

"There were some rough days as a team, but I feel like all the guys responded and we got some stuff done in these 15 practices," Campbell said. "I’m excited to see when we get back in June and train and then excited to see what we can do this season."

Ferentz likes the potential he senses with this group but knows plenty of work remains before the Hawkeyes kick off the 2021 season at home with a Big Ten Conference game against Indiana on Sept. 4.

He said Iowa’s top returning players not only made progress this spring but helped their 65 teammates who were going through their first set of spring drills progress after the onset of the COVID-19 pandemic canceled spring practices a year ago.

Ferentz used the work of running back Tyler Goodson as one example.

The junior, who has led Iowa in rushing in each of the past two seasons, concentrated on improving his blocking and receiving skills this spring, and Ferentz said Goodson brought the right approach to the practice field.

"He’s practiced every day with a great attitude. He works hard. The guys that we think are really quality players have proven themselves as quality players. They’ve had a great attitude all the way through spring," Ferentz said. "That sounds mundane, it sounds routine, but you don’t always see that, especially with older guys. They think it’s spring break instead of spring practice. These guys, they’ve gone out and shown the other guys that this is the tempo they’re supposed to work at."

That mindset has helped younger players on the roster grow as well.

A number of injuries — particularly on the defensive and offensive lines and in the receiving corps — have created some frustration for Ferentz this spring.

But, they have also created opportunities.

With senior Ivory Kelly-Martin on schedule for a preseason camp return following knee surgery, Gavin Williams and Leshon Williams have shown potential behind Goodson at running back.

Injuries on the lines on both sides of the ball have created additional opportunities as well.

Four of the eight players Iowa listed on its spring two-deep on defense did not participate Saturday, and on offense, projected starters Cody Ince and Justin Britt were absent from the Hawkeyes’ front five.

"I think our biggest challenge right now is that we’ve still got to work with all of those guys once they are back and then we’re going to develop some depth," Ferentz said. "We don’t have much depth on our team, period. I’m sure there is an exception, but I’m not sure where that is."

Goodson, who said he has set as a goal for the upcoming season of winning the Doak Walker Award, echoed Campbell in saying that Iowa players will need to commit themselves to greater consistency to build off their spring work.

Quarterback Spencer Petras showed continued progress, displaying improved accuracy and more decisive decision making as he works to build off of his first season as a starter.

Ferentz said back-up Alex Padilla has made strides during the final two weeks of spring practices as well.

"The biggest thing we’ve stressed with Spencer is not only improved accuracy, but delivering completions to where a guy can run with it," Ferentz said.

Defensive end Zach VanValkenburg, returning as a sixth-year player and the only returning starter on the defensive line, said growing roles and improved consistency have been objectives throughout the past five weeks.

"Spring ball is a time when you can make good strides and work together to grow skills and abilities," VanValkenburg said.

That remains a collaborative endeavor.

"Something I’m going to focus on this summer is grabbing the younger guys and helping bring them along," Campbell said. "That’s how our program is built, helping each other and helping the young guys grow."

Source of frustration: After remaining relatively injury free during the regular season last fall, Iowa has dealt with a number of injuries this spring.

"If there has been one frustrating thing this spring, it has been injuries," Iowa coach Kirk Ferentz said. "We’ve had a lot of guys in and out, which has made it tough at times."

Seven players listed as starters on the spring depth chart did not participate Saturday.

Least of his worries: One area Ferentz isn’t losing much sleep over is placekicker, where senior Caleb Shudak connected from 50 and 46 yards into a stiff southerly wind.

Shudak’s lone miss came from 39 yards out into the wind from the left hash, but the senior who is settling into a role filled by Keith Duncan the past two years said his spring has been productive.

"In a game-deciding situation, I’d feel good from 58, 59 yards," Shudak said. "I’m working with a good snapper and holder. It’s coming together well."

Yelverton missed that day with an injury and Miamen was given a week off to think about things following an arrest in downtown Iowa City the previous weekend.

The honors: Iowa recognized its men's and women's basketball teams before and after Saturday's practice.

Men's player Luka Garza received the Naismith Trophy as the nation's top college player before the practice and national freshman of the year Caitlin Clark of the women's team was honored following the workout.

Iowa running back Tyler Goodson (15) catches a pass ahead of linebacker Jack Campbell (31) during practice Saturday in Iowa City.