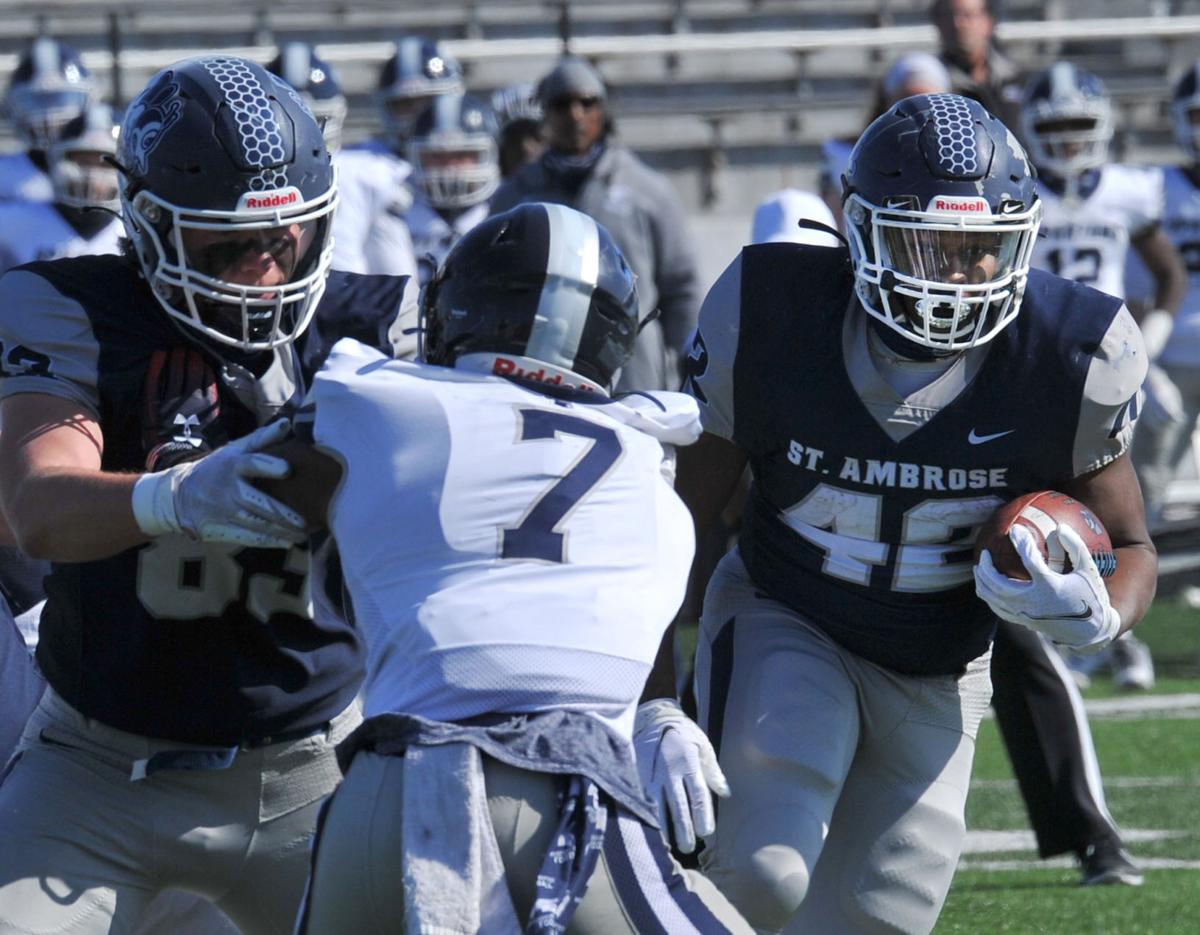 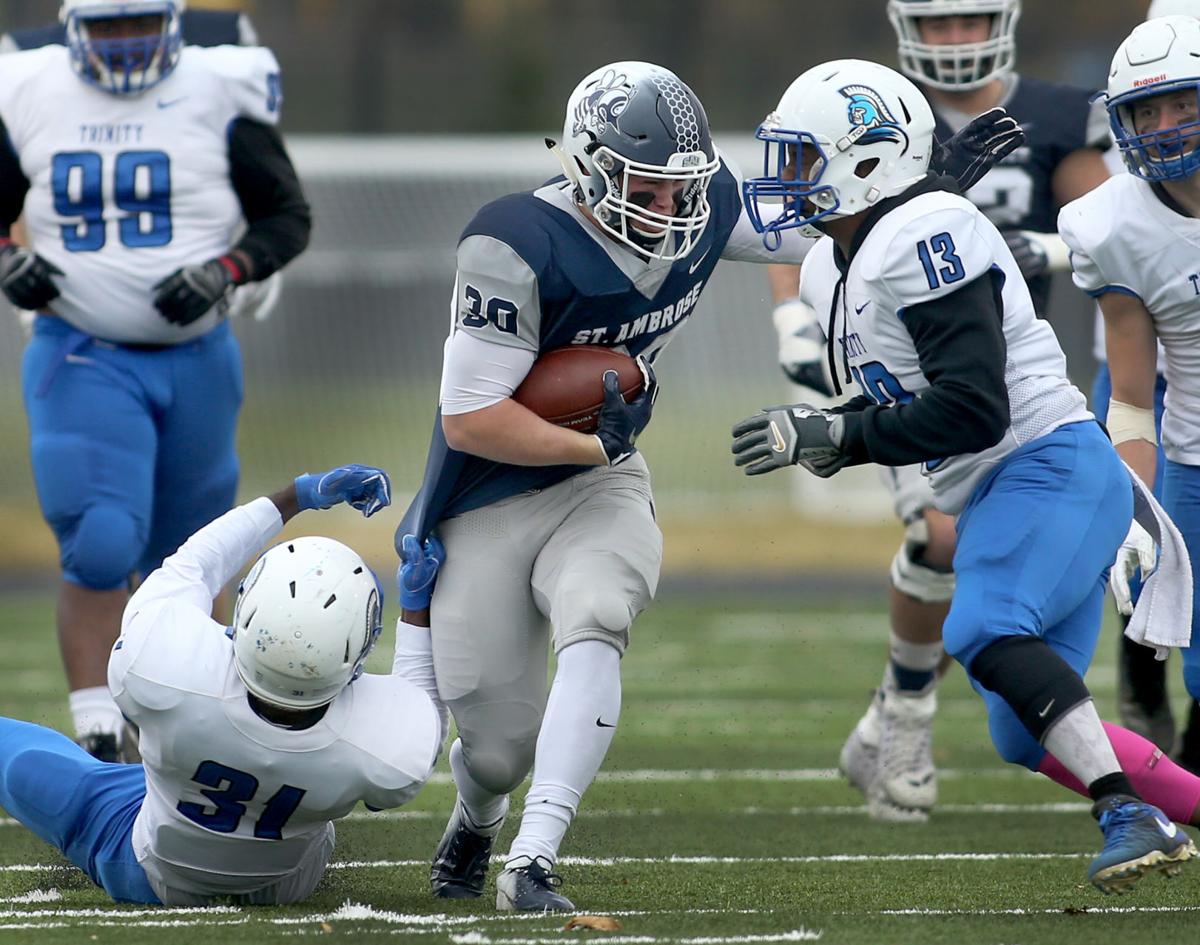 St. Ambrose running back Garret Tiarks works for extra yards during a 2018 game against Trinity International at Brady Street Stadium. 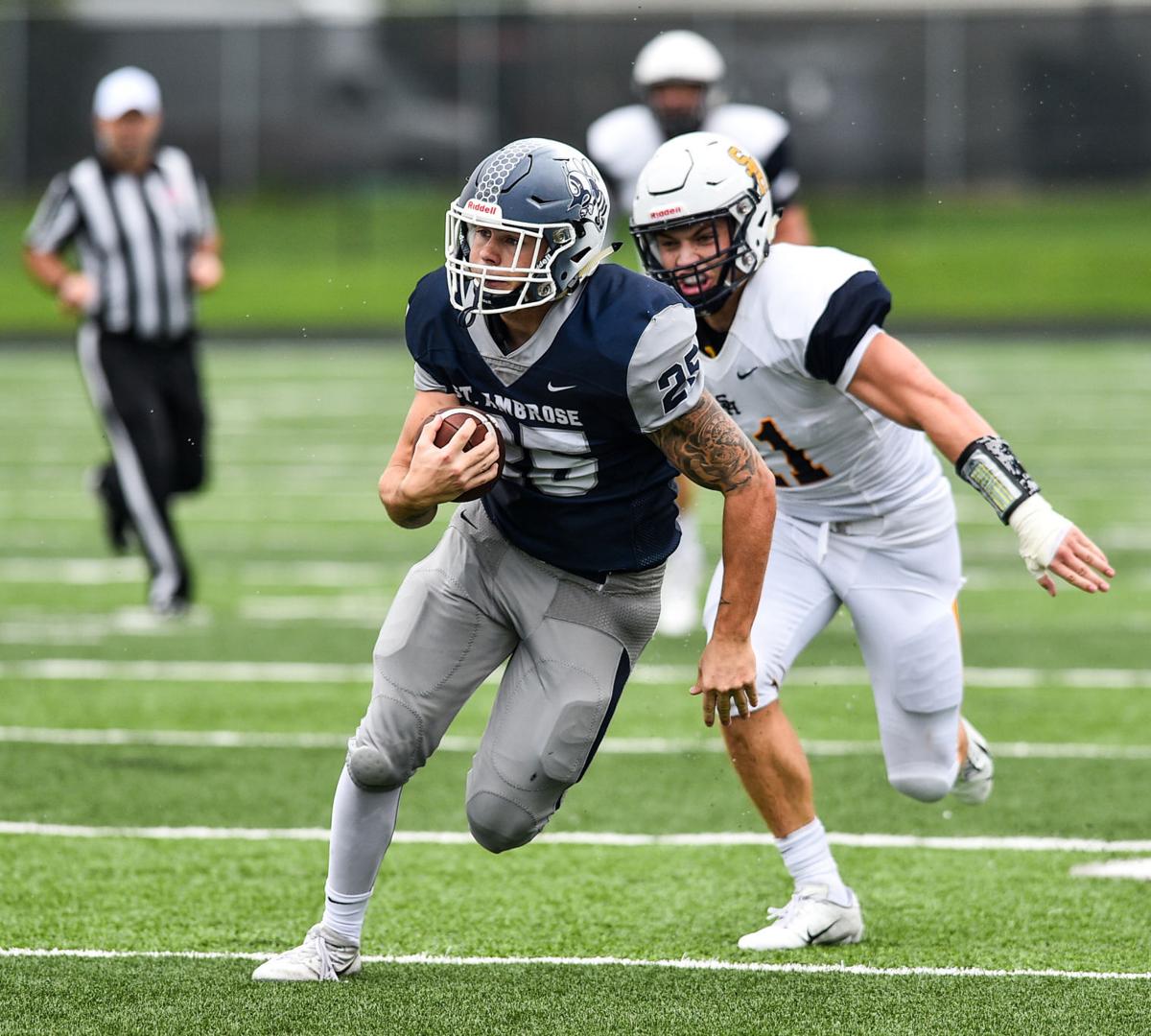 St. Ambrose running back Brandon Baalman carries the ball during a 2019 game against Siena Heights at Brady Street Stadium. 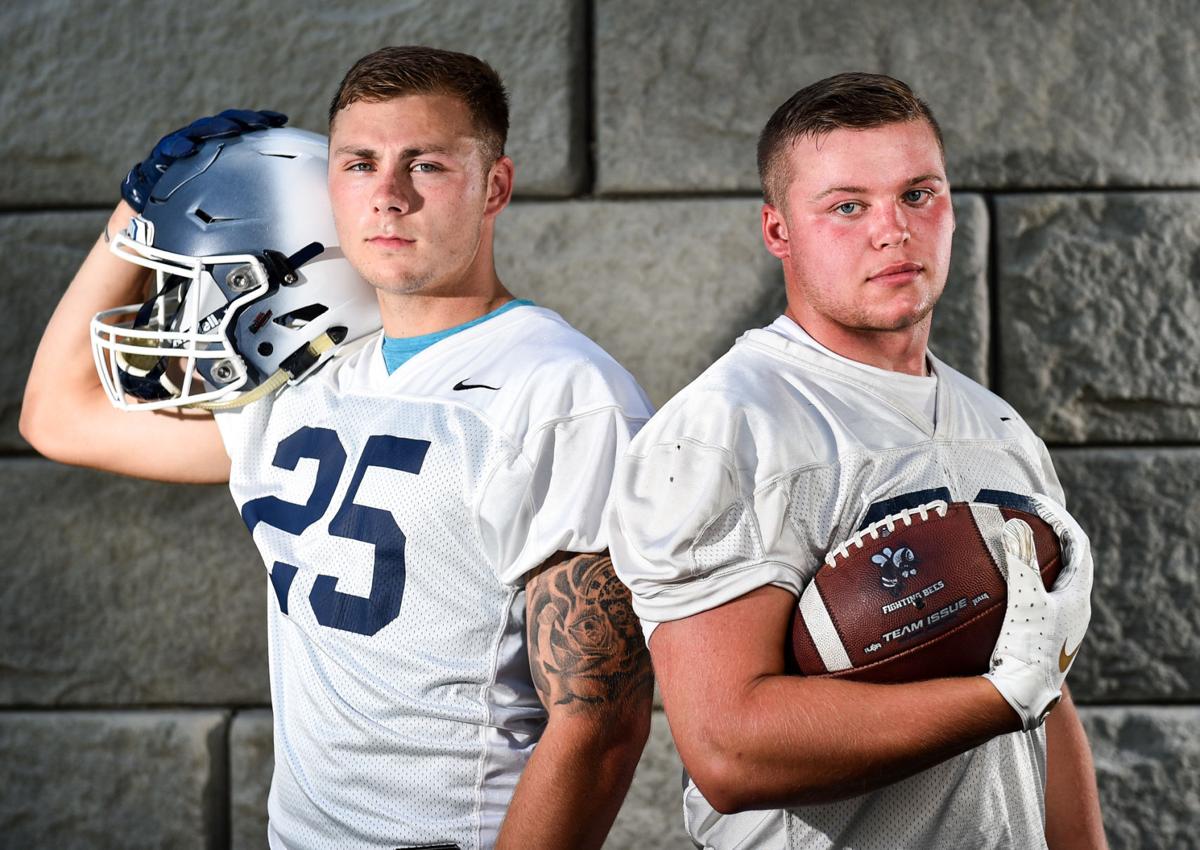 Running the football has been a collaborative effort for St. Ambrose this season.

The Fighting Bees don’t have a single ball carrier averaging more than 40 yards per game on the ground, but that hasn’t stopped St. Ambrose from putting together the second-most productive rushing attack in the Midwest League of the Mid-States Football Association.

Heading into Saturday’s 1 p.m. game at St. Francis (Ill.), among the seven teams in its conference only unbeaten Olivet Nazarene has rushed for more than the 925 yards the Fighting Bees have collected during their 4-2 start.

"It works because we all have the same goal in mind. We want to win," said T’Nahleg Hall, a 5-foot-10, 210-pound junior from Peoria Richwoods.

Hall joined the St. Ambrose program as a transfer from the University of Indianapolis and meshed quickly with a group of power backs who provide the strength needed to facilitate the Bees’ inside run game.

Four of the top nine rushing leaders in the division play for St. Ambrose, a group Hall leads. He is currently fifth in the league with his average of 36.7 yards per game on the ground.

A pair of St. Ambrose seniors, Garret Tiarks and Brandon Baalman, rank seventh and eighth in the league with averages of 30.5 and 30.3 rushing yards per game.

Junior quarterback John Benckendorf, who will miss the final two games of the regular season with a high ankle sprain re-aggravated in last week’s win at St. Xavier, is currently ninth in the conference with an average of 28.8 rushing yards per game.

St. Ambrose coach Mike Magistrelli wasn’t certain how things would play out in the Bees’ backfield this season.

The Bees returned experience in Tiarks and Baalman, although Baalman was working his way back from surgery, and Hall was a newcomer, joining the program in August.

What has transpired since the delayed season began in February has been a welcomed collaboration that has gained traction throughout the season, helping St. Ambrose build its current three-game win streak.

"There’s a real unselfishness in the running back room, guys who are really supportive of each other," Magistrelli said. "They all want to play and I’m sure they would all like more carries, but the way they’ve made it work I think it speaks to the character of each of those guys."

Baalman describes the collection of running backs and super backs who work together as "tight," saying, "We’re there for each other, to support each other any way we can."

Hall, Tiarks, Baalman and Benckendorf have each averaged around 10 carries per game for St. Ambrose, and each has indicated a willingness to sacrifice a few attempts if one of their teammates is having a special game.

In general, the three running backs typically rotate by series, although there have been substitutions within drives as needed.

Tiarks, a 5-11, 220-pound native of McCallsburg, Iowa, said success on the ground for the Fighting Bees has started with a sense of team.

"I think we have a good level of respect for each other. We knew coming into the season that we would have a lot of good backs, guys who could come in and do the job," said Tiarks, who will complete his Master’s degree in accounting next month.

"We know each other and trust each other, and that’s where it starts. We’re in this together."

That bond extends to the playing field on game day.

"I think we’re helping each other that way," Hall said. "If I see what a guy on defense is doing when I’m on the sideline, I’ll tell the other guys what I’m seeing, or if I notice something when I’m on the field, I’ll share that, too. It all helps."

The rotation is also helping keep fresh legs and bodies on the field.

"In the third and fourth quarter when we keep rotating backs, you notice it," Tiarks said. "The defensive guys on the other side of the line, if they’ve been out there all day, going in fresh to run the ball against them, it makes a difference."

Baalman, a 6-foot, 205-pound back from Grafton, Ill., said St. Ambrose backs are benefiting from the growth of the Bees’ offensive line.

"They’re playing good, physical football, and they’re creating the gaps we need to run the ball instead of us having to create our own gaps," said Baalman, who graduates in May with a degree in human performance and fitness.

"It’s all about us working together, and the last couple of games, that has come together well. We’re getting better every week."

Storylines: The Saints are the first of two straight opponents St. Ambrose will face for a second time this season. The Bees used a 33-yard Blake Wittman touchdown reception to seal the win in the first meeting, 14-6. Wittman leads St. Ambrose with 20 receptions this season and averages one touchdown catch per game. With starting quarterback John Benckendorf sidelined for the remainder of the season with a high ankle sprain, Aaron Kussmann and Declan McDonald have taken most of the reps under center this week for St. Ambrose. Eric Maffie, a former Moline prep, replaced Joey Passo at QB last week and led the Saints on a pair of scoring drives in overtime as St. Francis beat Missouri Baptist 34-31. Perre Barbarin, who ran for 19 yards in the first game at St. Ambrose, leads the Saints’ ground game.

Watch now: Will there be more fireworks between the Cardinals and Reds?

IOWA CITY — On the first play of a controlled scrimmage Saturday, Tyrone Tracy Jr. welcomed fans back to Kinnick Stadium.

Maybe the Augustana College football team should sport new uniforms for every game, if Friday's outing was any indication.

John Waggoner labels the expectations that accompany stepping into a starting role on the Iowa football team’s defensive line as "healthy pressure."

Success began in the trenches for the St. Ambrose football team this season, something reflected Friday when the Mid-States Football Associati…

CHAMPAIGN — When the University of Illinois football team gets a national audience for its spring game at 7 p.m. Monday on the Big Ten Network…

Sam LaPorta gets it.

Menke made most out of tough go with Vikings

St. Ambrose running back Garret Tiarks works for extra yards during a 2018 game against Trinity International at Brady Street Stadium.

St. Ambrose running back Brandon Baalman carries the ball during a 2019 game against Siena Heights at Brady Street Stadium.