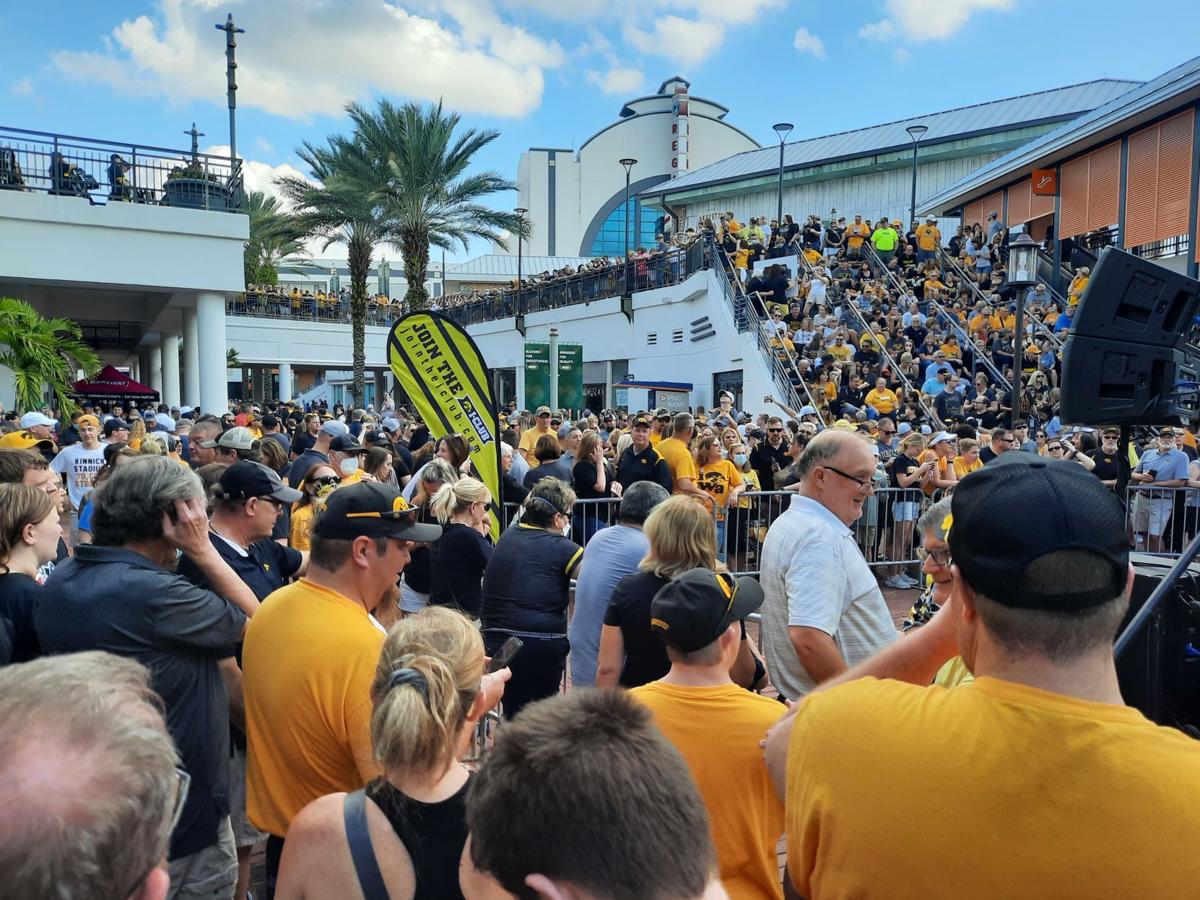 Thousands of Iowa football fans showed up Friday afternoon for a Citrus Bowl pep rally at The Point Orlando. 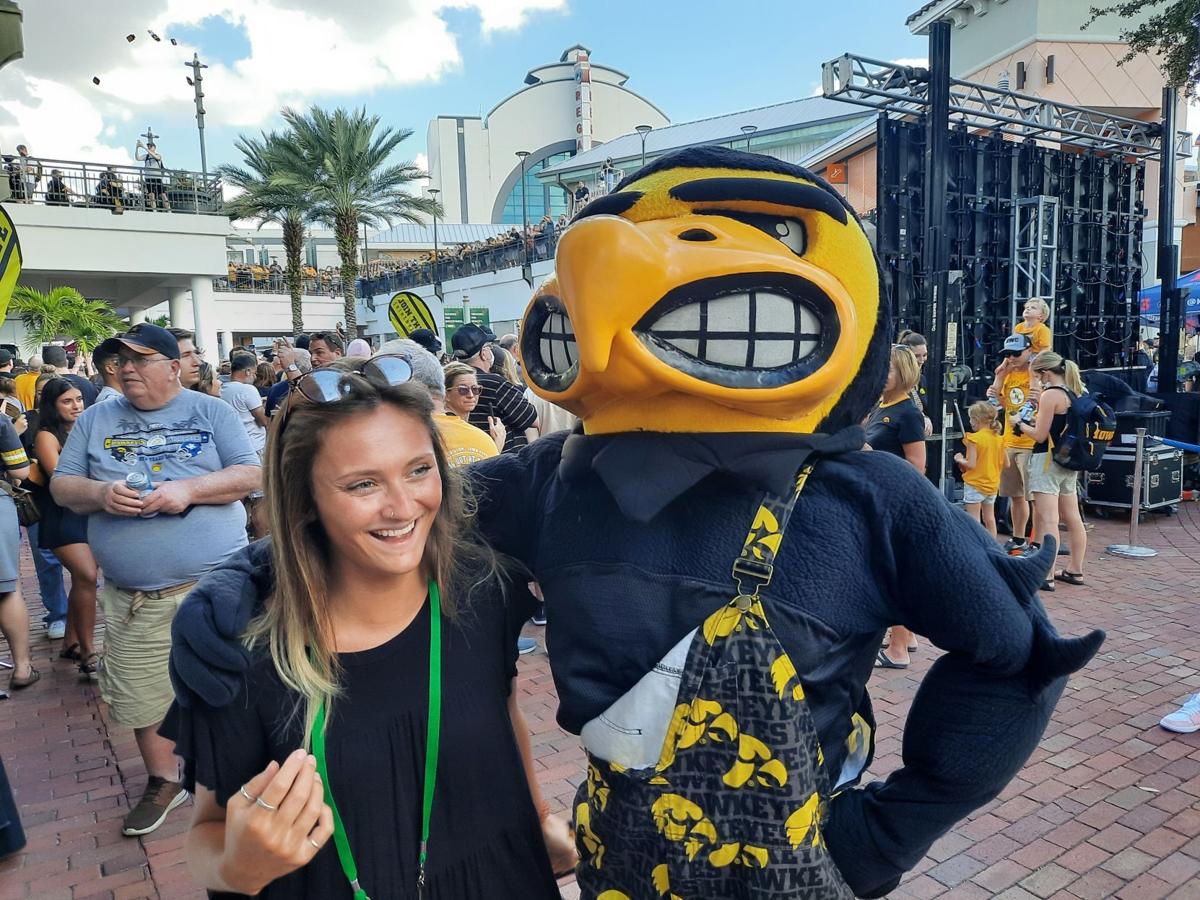 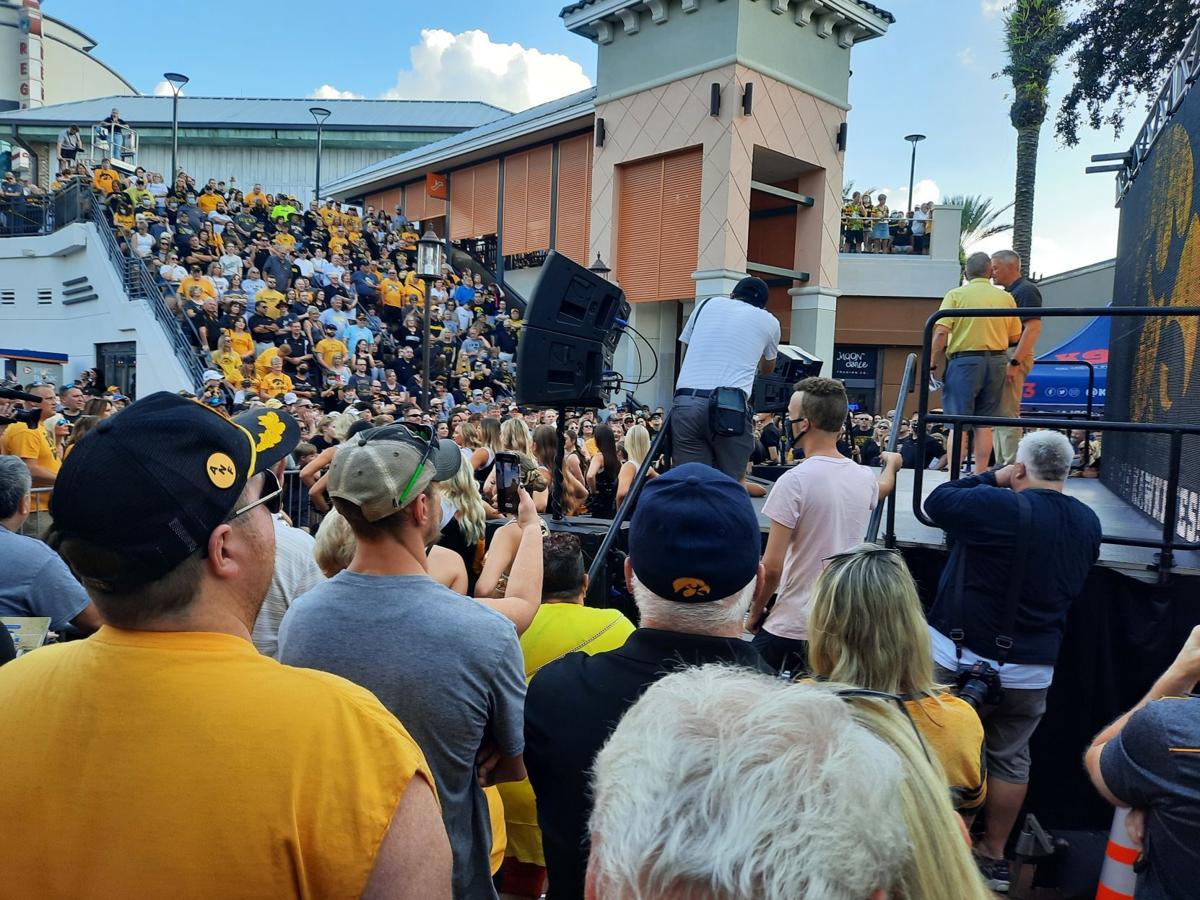 Iowa Director of Athletics Gary Barta tells the crowd Friday at the Hawkeye Huddle Citrus Bowl pep rally that Iowa has room for more trophies in its football complex.

ORLANDO — Terry Swisher of Davenport has been a regular in the stands at Kinnick Stadium for almost three decades.

But he had never attended an Iowa football bowl game or the Hawkeye Huddle pep rally, until now.

“I’ve been missing out,’’ Swisher said Friday, soaking in the sun at the Citrus Bowl version of the Hawkeye Huddle.

He joined several thousand Hawkeyes fans at a New Year’s Eve late-afternoon rally at The Pointe Orlando, an event shared with Kentucky before Saturday’s noon Citrus Bowl game between the two teams.

With temperatures in the mid 80s under sun-filled skies, fans sang the school song, cheered along with members of the Iowa spirit squad and dance team, and roared at every mention of the possibility of a Hawkeyes victory in Saturday’s game over a Kentucky team coached by a former Iowa player, Mark Stoops.

The crowd also gave a respectful round of applause after Gary Dolphin, the play-by-play voice on the Hawkeye Radio Network, mentioned that thoughts of Iowans were with people in Kentucky following the recent tornado tragedy in that state.

“I finally ended up on the right side of the Mississippi River,’’ Wilson told the crowd, adding, “Everywhere I’ve been across the country I’m finding Hawkeye fans, and that’s exciting.’’

Iowa Director of Athletics Gary Barta rattled off a list of trophies the football team has earned, mentioning the Cy-Hawk, Heroes and Floyd of Rosedale prizes in Iowa's possession following wins over rivals and the Big Ten West Division championship trophy.

“We have room for more,’’ Barta suggested.

There was no disagreement from a crowd that included longtime Iowa assistant coach Don Patterson.

Swisher said he was wintering in Fort Myers, Fla., this year and couldn’t miss the chance to see Iowa play one more game.

“I’m pretty excited about it,’’ Swisher said. “I’ve always wanted to go to a bowl game, and being this close, I had to be here. I’m looking forward to a great game.’’

Allan Behrens of Clinton has missed just one bowl Iowa has played in since 2001 and expects Iowa, 10-3 on the season, to need to be at its best against a Kentucky team that is 9-3.

“I wish Tyler Goodson were here, but I know the coaches will have a good plan together,’’ Behrens said, referencing Iowa’s rushing leader who opted out of the bowl to begin preparing for the NFL draft. “I’m rooting for (senior reserve) Ivory Kelly-Martin to go out with a bang.’’

Bruce Rickertsen of Goose Lake, Iowa, expects the Hawkeyes to face a stiff test in their final game of a successful season, as well.

“Kentucky looks like a tough team, but I know Iowa will compete,’’ Rickertsen said. “It’s been fun watching this team play. They’ve had a great season and one more win would make it even better.’’

#15 Iowa Hawkeyes take on the #22 Kentucky Wildcats in the VRBO Citrus Bowl Game on Saturday. Here's how to watch:

Thousands of Iowa football fans showed up Friday afternoon for a Citrus Bowl pep rally at The Point Orlando.

Iowa Director of Athletics Gary Barta tells the crowd Friday at the Hawkeye Huddle Citrus Bowl pep rally that Iowa has room for more trophies in its football complex.