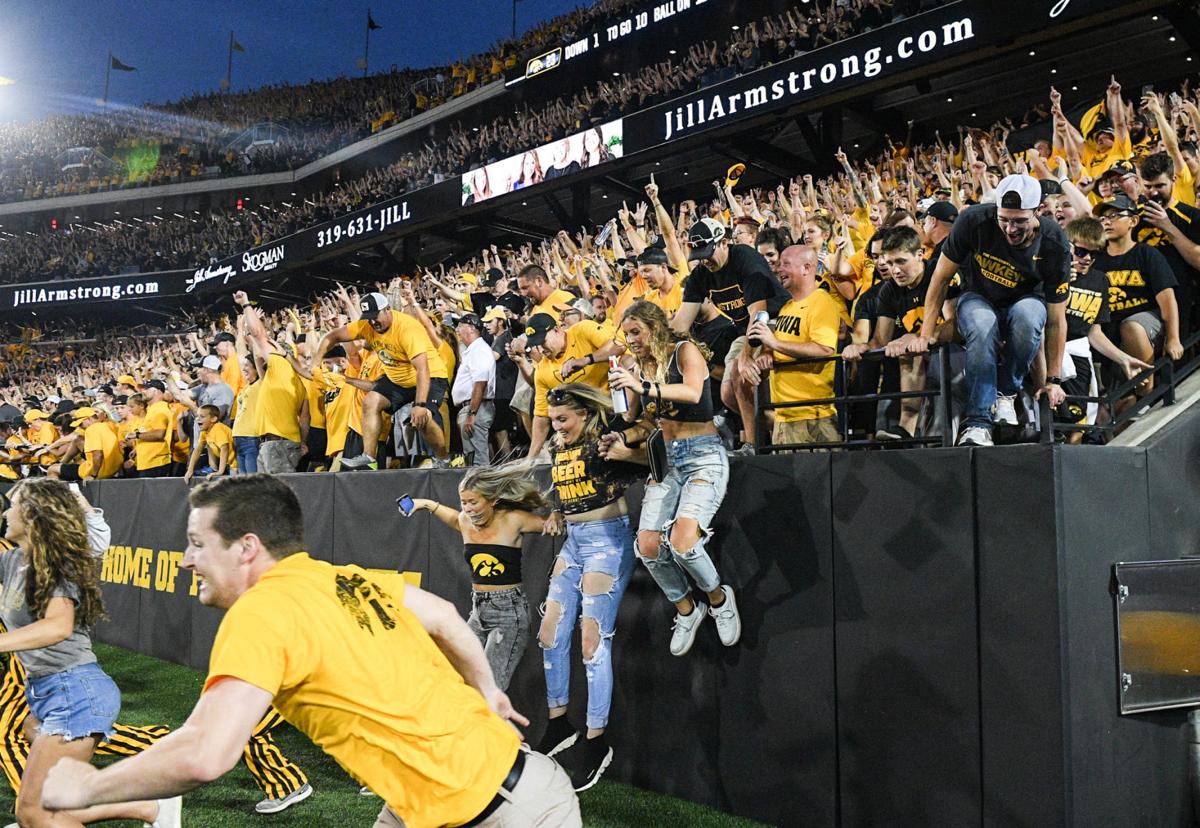 Iowa fans rush the field after the Hawkeyes win over Penn State at Kinnick Stadium on Saturday evening. 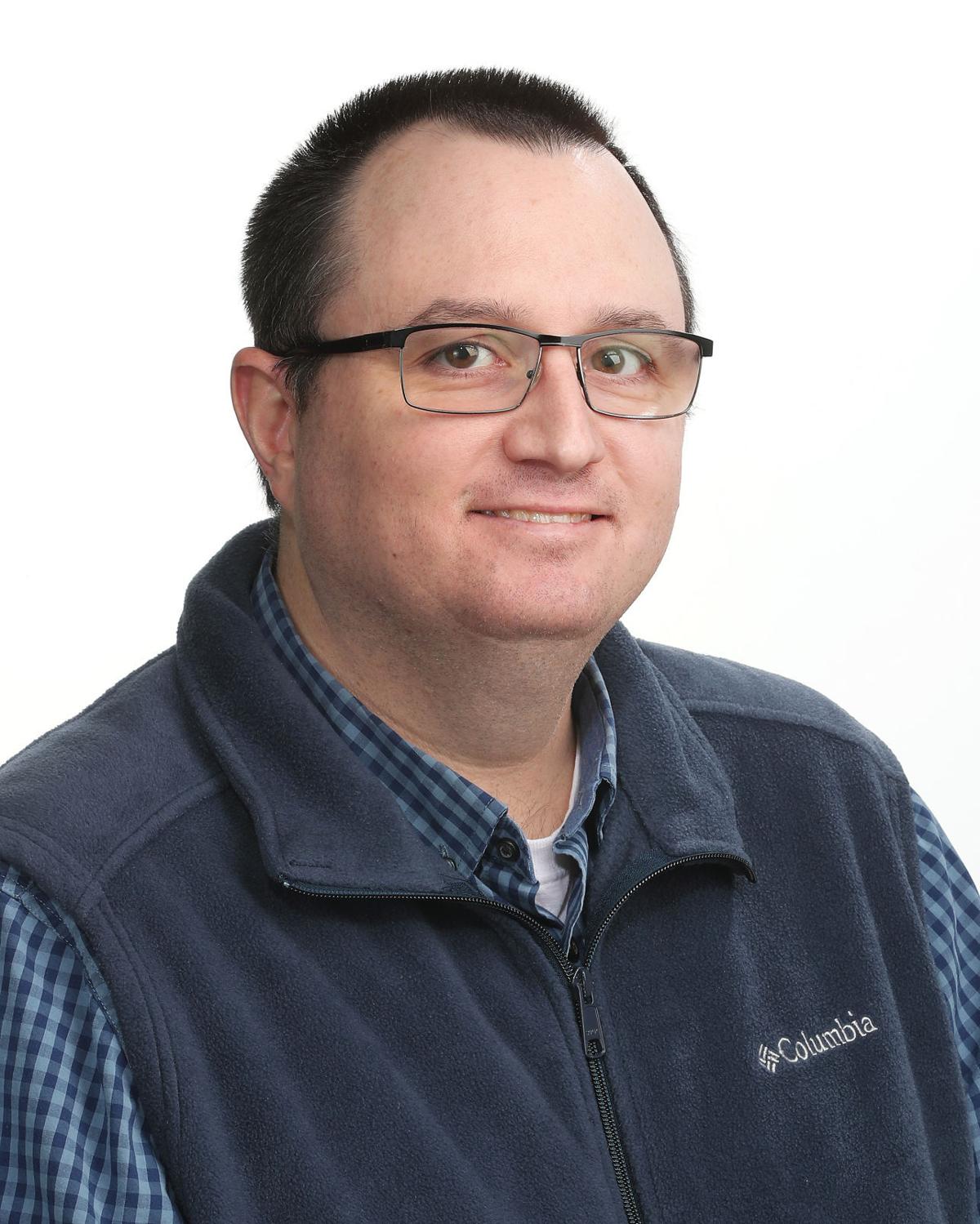 IOWA CITY — Billed as the biggest game at Kinnick Stadium in four decades, the Iowa football team delivered one of its biggest wins in school history.

What followed was an epic celebration.

As quarterback Spencer Petras took a knee and the final two seconds ticked off the clock on third-ranked Iowa’s 23-20 victory over fourth-ranked Penn State, fans spilled onto the turf from every direction. It quickly became a sea of black and gold.

“I’ve never been part of something like that before,” defensive lineman and Orion graduate Logan Lee said. “To be in the middle of that chaos, I won’t forget that.”

Petras was met by a friend on the field. They hugged and then he fell on top of her.

"It was pretty scary for a second," Petras said. "I was like, 'Sammy, we have to get up because we could get trampled real quick.’ She was not exactly understanding.”

Just like those who were here 36 years ago to witness Rob Houghtlin’s last-second field goal to beat second-ranked Michigan or Iowa’s rout over third-ranked Ohio State in 2017, Saturday’s comeback victory will live in Hawkeye lore.

Defensive back Jack Koerner was one of the last players to sift his way through the melee.

“I wouldn’t trade that feeling for the world,” he said. “Going to Kinnick since I was a little kid, high-fiving fans and hearing ‘Go Hawks 150 times,’ it is a moment I’ll never forget for sure.”

Center Tyler Linderbaum joked he might have suffered a slight concussion from all the fans slapping him on the helmet as he was trying to exit the field.

“This was the biggest of big time,” receiver Nico Ragaini said. “You don’t get moments like this every single day.”

The 69,250 rowdy fans deserved an assist in the outcome as Penn State was whistled for an astonishing eight false start penalties.

Petras said it was the loudest he's ever heard Kinnick.

“The fans were on another level today,” Ragaini said. “I haven’t seen anything like it.”

Suddenly, this Iowa football season is turning into something extraordinary.

The Hawkeyes are 6-0 at the midway point of the regular season and likely will climb to No. 2 in the country come Sunday afternoon after Alabama's loss to Texas A&M.

With a bye in two weeks, Iowa is a victory against Purdue next Saturday from remaining in the College Football Playoff chatter until at least late October.

"You're getting way ahead of me because we could be crying next week at this time or we could be really happy," Iowa coach Kirk Ferentz said.

The Hawkeyes were going to savor this one for 24 hours.

It wasn’t easy. Far from it. That’s what made it memorable.

Iowa showed plenty of moxie digging itself out of a 17-3 hole, its largest deficit in the last 18 games.

The defense looked vulnerable as Penn State attacked every inch of the turf and scored two touchdowns before the first quarter was over.

The offense was abysmal. Petras missed on eight of his first nine pass attempts and had a quarterback rating of 2 at one point.

Iowa was on the verge of fading out of the national conversation.

“We just had to stay with it,” Linderbaum said. “The big thing is, it is a four-quarter ballgame.”

There is no question the complexion of the game altered when Penn State starting quarterback Sean Clifford departed with an undisclosed injury.

Iowa linebacker Jack Campbell made a clean, hard hit on Clifford in the second quarter and the signal caller never returned.

The defense eventually settled in and came up with four more interceptions, giving them an eye-popping 16 on the season.

The offense awoke from its slumber against an athletic Penn State defense.

Tyler Goodson found traction in the running game. Petras rebounded to lead three second-half scoring drives, including a well-designed misdirection play that resulted in a 43-yard touchdown pass to Ragaini with 6-plus minutes remaining for the game-winner.

The Hawkeyes have a clear identity — an elite defense, exceptional special teams and an offense that is not overly flashy but understands its strengths.

It was patient enough to work through the struggles and then was clutch late.

"This was a statement win," Koerner said. "We try not to concern ourselves too much with outside noise, whether people think we deserve to be this or deserve to be that. But some of that stuff bleeds through a little bit and this definitely was a great, great win.”

The celebration extended into the locker room.

“Bunch of jumping, music going and dancing with recruits,” Goodson said. “It is a moment nobody else can feel unless you’re in athletics.”

The giddy fans had an experience they’ll be talking about for days, weeks, months and years ahead.

Linderbaum summed it up perfectly.

"Today was definitely special," he said. "It is something we'll remember for the rest of our lives."

Another pay day for the “Dough Boys,” a rowdy crowd at Kinnick and the death of a former Hawkeye are all part of today’s Hawkeye 10@10.

Iowa fans rush the field after the Hawkeyes win over Penn State at Kinnick Stadium on Saturday evening.