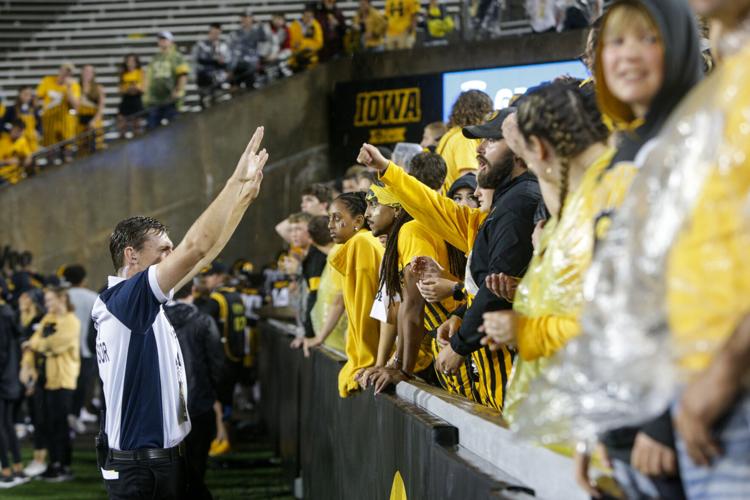 A security guard ushers for spectators to seek shelter as officials announce a third lightning delay during the third quarter of a college football game, Saturday, Sept. 17, 2022, at Kinnick Stadium in Iowa City. 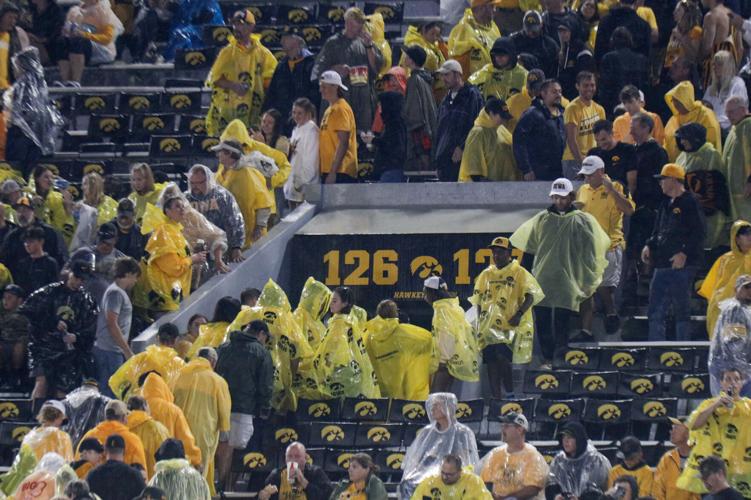 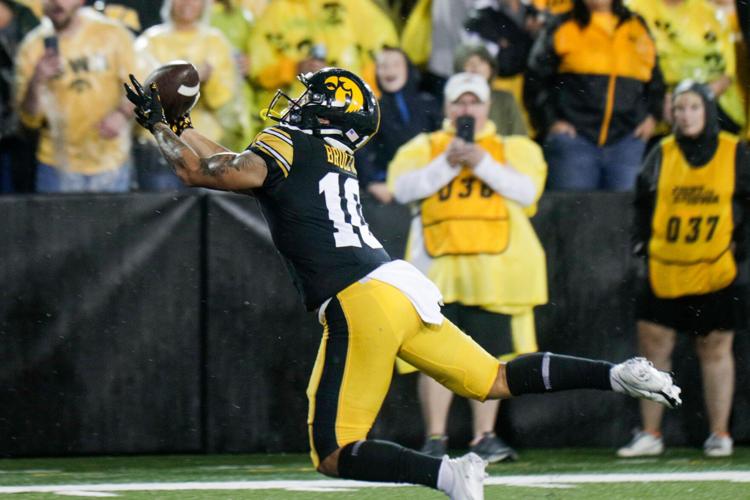 Iowa wide receiver Arland Bruce IV reaches out to catch a pass in the end zone for a touchdown during the first quarter of Saturday's game at Kinnick Stadium.

IOWA CITY — The first quarter of Iowa's 2022 football season could be an episode of Strangest Things.

Iowa won its season opener with two safeties, a field goal and no touchdowns. It lost the Cy-Hawk game despite blocking two punts and getting three takeaways as its quarterback was booed repeatedly in his home stadium.

With a 6:40 p.m. start and three lightning delays that totaled nearly four hours, the closing lyrics to Iowa's fight song "Until the game is won" brought new meaning.

Iowa walked off the turf at 1:39 a.m. with a 27-0 triumph over Nevada. Coach Kirk Ferentz's postgame press conference finished after 2:30 a.m.

Less than 1,000 fans, mostly students, were in the stadium to see the conclusion. It was a rerun of 2020 with limited crowds because of the COVID-19 pandemic.

The night was so bizarre that a slew of fireworks went off behind the scoreboard during one of the stoppages around 10:30 p.m. They were designed to go off after the game, but it is considered a safety hazard if they aren't launched once they're loaded.

When play resumed after the last delay, a gentleman brought his dog in to watch the final quarter or so unfold. A few others were in suits and ties and made the trip in after attending a nearby wedding reception.

Card games broke out in the Hawkeye locker room to pass time. Some played games on their phone or listened to music. Receiver Nico Ragaini enjoyed a sandwich.

Ferentz felt like he was in a baseball clubhouse.

“Guys were doing all kinds of things,” Ferentz said. “It was kind of interesting.

“It was unusual for sure.”

What also was unusual was Iowa scoring three offensive touchdowns in a game, something we hadn't witnessed since a 27-22 win over Minnesota last November — a span of seven games.

Let's not get too carried away or make any sweeping declarations.

This was Nevada, a Mountain West team which surrendered 55 points and 616 yards to FCS Incarnate Word last week. It allowed Texas State to throw for nearly 300 yards the week prior to that.

The Wolf Pack are not exactly a defensive juggernaut.

But for an offense that has been unproductive and much maligned the first two weeks, Iowa showed some tangible progress and resembled a college offense for the first time this season. It had 337 yards Saturday after netting 316 in the first eight quarters combined.

The return of receivers Keagan Johnson and Ragaini, both out with injuries the first two weeks, helped immensely.

The reinforcements at receiver, along with Brody Brecht logging more snaps, instilled some confidence in quarterback Spencer Petras.

Petras completed 14 of 26 passes for 175 yards, one touchdown and no turnovers.

“Spencer, I thought, made some beautiful throws tonight and some real near-misses," Ferentz said. "Hopefully, in time, those will be completions."

The Hawkeyes didn’t attempt a pass that traveled more than 20 yards against Iowa State last week. Unofficially, they threw eight … in the first half against Nevada.

"That's been missing a little bit the last couple of weeks," Petras said. "With how we run the ball and how our offense is, we need to have that part of our repertoire. There is still stuff to clean up, but it was good to hit on a couple."

Freshman Kaleb Johnson exploded for two long touchdown runs, including a 55-yarder that is Iowa's longest play of the season.

“Having the whole unit together, we just felt cohesive and I think everything clicked today,” receiver Arland Bruce IV said.

Petras found Ragaini for a 46-yard pass immediately out of the last delay. He hit Bruce IV for a 21-yard touchdown in the first quarter.

That, mixed in with 4.6 yards per rush from Iowa's backfield, was certainly a positive.

"It was great seeing some guys back in the huddle," Petras said. "It has been a while. It allows us to be more multiple and probably less predictable."

As the Hawkeyes turn the page to the start of Big Ten play this Saturday against Rutgers, can the offense take another step?

For all of Iowa's flaws on offense, the Big Ten West is a hot mess.

Nebraska, which paid a $15 million buyout to get rid of Scott Frost, has a porous defense.

Purdue is electric on offense, but has two losses already and was undisciplined in the final stages of Saturday's setback to Syracuse.

Northwestern has stumbled to Duke and FCS Southern Illinois.

Wisconsin was tripped up at home by Washington State.

Illinois has decisive wins over Wyoming and Virginia, but squandered an opportunity for a road victory against Indiana.

Then, there’s Minnesota. The Golden Gophers have looked the part as the favorite in the West so far, but their three wins have come against New Mexico State, Western Illinois and Colorado — a combined 0-10. We need to see more.

Iowa checks the boxes as a contender in two phases — defense and special teams. It just needs to become mediocre on offense to be in the hunt come November.

"We have some strengths on our football team and I know we can get a lot better in some other areas," Ferentz said.

How much better? Time will tell.

If the first three games have shown anything, expect a lot more goofiness between now and late November.

IOWA CITY — Showing up at Kinnick Stadium with a full deck of cards proved advantageous Saturday night for the Iowa football team.

A capsule look at the Iowa-Rutgers matchup.

The Iowa football team is preparing to face the rush-heavy offense of Rutgers.

Winning by a combined score of 188-35, there isn't any change at the top of my ballot for this week's Associated Press poll.

The Iowa-Rutgers game will showcase two Australian punters, both of whom have been key to the teams' early season victories.

A security guard ushers for spectators to seek shelter as officials announce a third lightning delay during the third quarter of a college football game, Saturday, Sept. 17, 2022, at Kinnick Stadium in Iowa City.

Iowa wide receiver Arland Bruce IV reaches out to catch a pass in the end zone for a touchdown during the first quarter of Saturday's game at Kinnick Stadium.