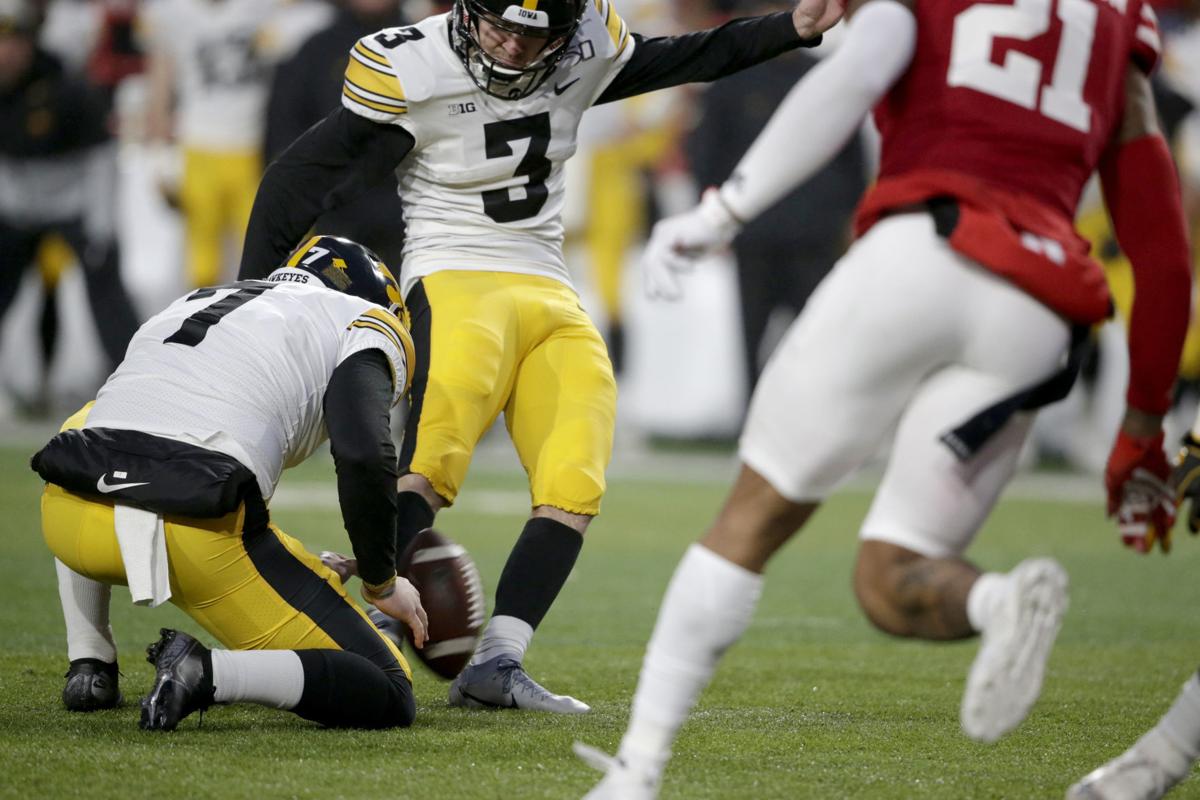 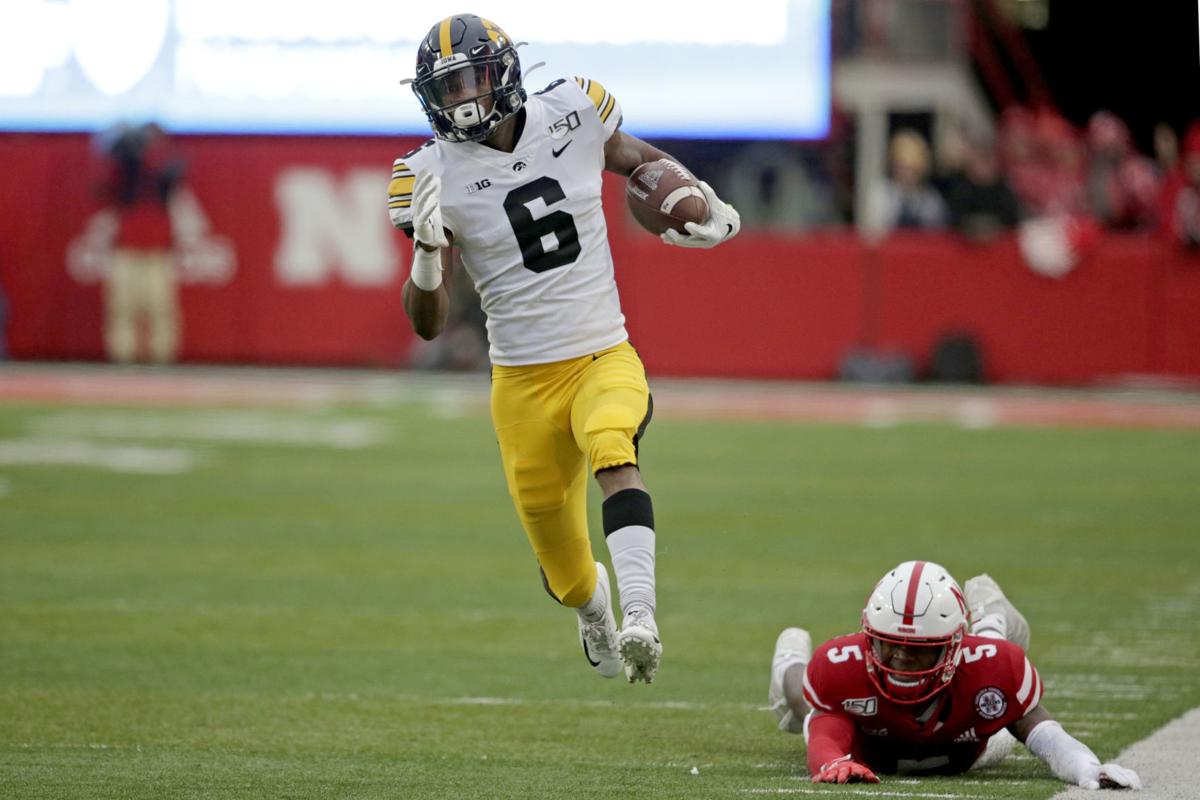 Iowa wide receiver Ihmir Smith-Marsette returns a kickoff for a touchdown past Nebraska cornerback Cam Taylor during the first half of Friday's game in Lincoln, Neb.

LINCOLN, Neb. — Iowa’s football victory over Nebraska on Friday was sealed with a kiss.

Unfazed by the two timeouts called by Nebraska in an attempt to ice him, Keith Duncan drilled a 48-yard field goal with one second remaining to give the 19th-ranked Hawkeyes a 27-24 victory at Memorial Stadium.

After the ball split the uprights, Duncan turned toward the Cornhuskers sideline, pointed and then blew a couple of kisses Nebraska’s way.

Nebraska, which lost at Iowa 31-28 on a 41-yard Miguel Recinos field goal as time expired last season, wasn’t having much fun after watching the Hawkeyes haul off the Heroes Trophy for a fifth-straight year and deny the Cornhuskers bowl eligibility.

"We keep coming up just short. There’s about 100 different ways you can get better to make sure the outcomes are different," said Cornhuskers coach Scott Frost, whose team finished 5-7.

Duncan’s game-winning kick provided the Hawkeyes with their only points of the second half, turning back a second-half surge from the Cornhuskers that followed a quick start by Iowa.

"We did a lot of good things in the first half, but Nebraska didn’t go away," offensive tackle Tristan Wirfs said. "They’re a good team, got back in the game, but our defense, they got the stops we needed and gave us a chance."

Nebraska had tied the game with a pair of third-quarter touchdowns, cutting into a 24-10 halftime deficit with a 39-yard pass from Luke McCaffrey to JD Spielman before Wyatt Mazour scored on a 9-yard carry to tie the game with :32 to play in the third quarter.

The teams traded six punts in the fourth quarter before Iowa took over with 3 minutes, 14 seconds remaining.

Mekhi Sargent busted loose for a 30-yard run on the first play of the series but fumbled after taking the next handoff and Cam Taylor-Britt, who had earlier returned an interception 38 yards for a score, recovered with 2:32 to go.

The Cornhuskers reached midfield before an illegal block stalled the drive and Nebraska punted the ball back to Iowa with 32 seconds left in the game.

Consecutive 22-yard passes by Nate Stanley positioned Duncan to attempt what became his nation-leading 29th field goal of the season.

"He’s proven time and time again in practice and in games that he was going to perform for us," Stanley said. "We knew we didn’t have to get a touchdown. We just needed to get into field-goal range."

The rest was up to Duncan, who learned after the game that he was one of three Hawkeye walk-ons being placed on scholarship.

"It’s not just one guy that goes out there and wins a game," Duncan said, praising the consistency of snapper Jackson Subbert and holder Colten Rastetter. "They did a great job on that snap and hold, and the line did a great job protecting. It’s all about going in and executing."

Duncan didn’t mind when Frost chose to use his final timeouts.

"That just allowed me to get my mind set, focus on what I needed to do, find my spot in the background where I need to spot my kick," Duncan said.

"In the second half, we didn’t get that many opportunities. No extra points. No field goals. I just had to get back into the rhythm of things, go through my routine again, go out and execute."

Rastetter, a senior who was the holder a year ago when Recinos forced the Cornhuskers to stomach a nearly identical heartbreaking loss, said there wasn’t any doubt when the ball left Duncan’s foot.

"He’s so consistent," Rastetter said. "In those moments, it is like everything is in slow motion. Great snap. I felt the ball as he kicked it and then just watched it go through. It was just like last year. Same result."

The game followed nearly the same script as the 2018 version as well.

Nebraska (5-7, 3-6) answered when Taylor-Britt picked off a pass by Stanley and returned it 38 yards for a score to cut the Hawkeye lead to 17-10 with 8:54 remaining in the first half.

Thirteen seconds later, Smith-Marsette found room around the left side to return the ensuing kickoff 95 yards for a touchdown that allowed Iowa to regain a 14-point margin that it held until the second half.

"I was ready to go right, but when I looked that way, they had it all sealed off, it wasn’t happening, so I crossed back to the left and there was some room to make a play," Smith-Marsette said. "It turned the momentum right back, felt good."

Iowa gained 191 yards in the opening quarter, including 152 on the ground, but totaled just a combined 18 yards of offense in the second and third quarters as Nebraska played its way back into the game.

"I have a lot of respect for the big-play ability of Nebraska and suspected they would make a push, and they certainly did in the second half," Iowa coach Kirk Ferentz said. "Our guys stood tall and really did a good job."

LSU scored more against Clemson than any other team this season

See all the highlights from the College Football Playoff championship game as No. 1 LSU beat No. 3 Clemson in New Orleans, 42-25.

Iowa wide receiver Ihmir Smith-Marsette returns a kickoff for a touchdown past Nebraska cornerback Cam Taylor during the first half of Friday's game in Lincoln, Neb.