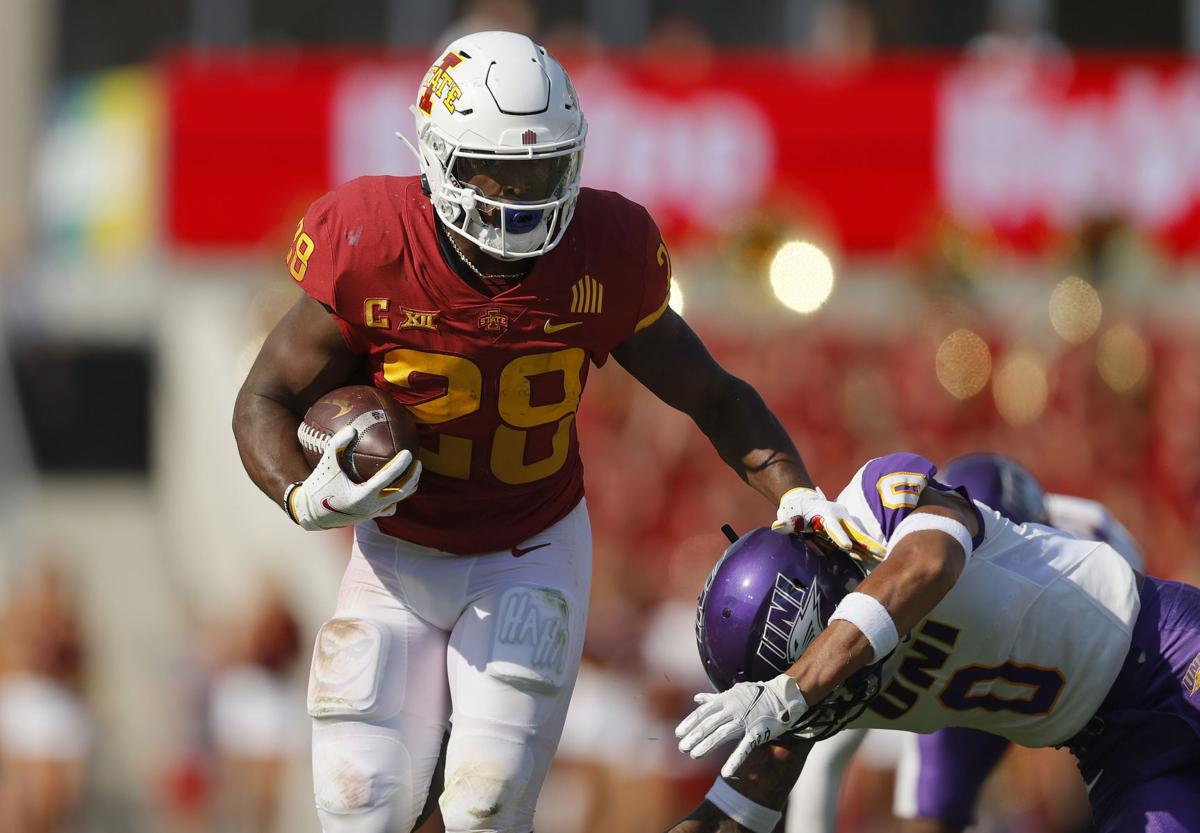 Iowa State running back Breece Hall runs the ball as he eludes a tackle by Northern Iowa defensive back Jevon Brekke during the first half of last Saturday's game in Ames.

Iowa running back Tyler Goodson finishes a 56-yard touchdown run during the first half of the Hawkeyes win last Saturday against Indiana in Iowa City.

Given their preference, the combatants in Saturday’s Cy-Hawk football game would tuck the ball into the hands of two of the nation’s top backs and run with it.

While both the ninth-ranked Cyclones and 10th-ranked Hawkeyes have defenses that will work to prevent that in the 3:30 p.m. top-10 showdown at Jack Trice Stadium, Iowa State’s Breece Hall and Iowa’s Tyler Goodson understand that every yard matters.

"Nothing will come easily, but we’ve got to find a way to get it done," said Goodson, who rushed for 99 yards in the Hawkeyes’ season-opening win over Indiana.

Hall was disappointed with his 69-yard effort on 23 carries in the Cyclones’ win over Northern Iowa a week ago.

"I have high expectations for myself and the team and I feel like I didn’t come out and play like I should have," Hall said. "I thought I could be way better than that and I know I have to be."

Both have earned the honors they have received.

A preseason first-team All-American, Hall was the Big 12 Conference offensive player of the year and a first-team all-conference pick last season after rushing for 1,572 yards in 12 games for the Cyclones.

Goodson was recognized as a first-team All-Big Ten Conference selection last season after leading the Hawkeyes with 762 rushing yards and recording 152 receiving yards on 15 catches in Iowa’s shortened eight-game season in 2020.

Hall has watched plenty of tape over the past week, trying to learn from what he labeled one of the most disappointing performances of his career.

Goodson expects the Cyclones to be more than ready for the Hawkeyes.

"I’m sure their fans are in their heads about wanting to beat the Hawkeyes. This is their Super Bowl," Goodson said. "They haven’t beaten us in a couple of years. I think them being at their place knowing College GameDay is going to be there is a good distraction for them and allows us to focus on us."

Iowa State last defeated Iowa in 2014, something Hall is well aware of as well.

But he isn’t buying into anything other game preparation.

"I don’t pay attention to distractions," Hall said. "I honestly don’t care for them. I stay true to myself. We stay true to being Iowa State. We know what we need to do. We know how we need to prepare. There’s nothing to it but that."

Goodson said the top-10 match-up and the hype surrounding this year’s Cy-Hawk match-up is good motivation.

Goodson, Hall and Iowa State’s second-team running back, Jirehl Brock of Quincy, Ill., were all part of the same 2019 recruiting class, and the Hawkeyes and Cyclones recruited all three players.

"I think it’s worked out well for all of us. We’re where we want to be, doing the things we want to do," Goodson said.

0:29 Watch now: Hawkeye OL Tyler Linderbaum on what it takes to work in front of raucous crowds

During the recruiting process, there was communication between the prospects.

“Me and Jirehl, especially, we went back and forth with each other. Iowa was recruiting me a little more than Iowa State, and when they told me Jirehl was coming up for an official visit, I committed that day," Goodson said. "I didn’t want him to take away my opportunity."

Hall said he didn’t fully understand the rivalry between the schools when he was being recruited by both.

"I understand it now," Hall said.

With the teams not meeting a year ago when COVID issues limited Iowa to conference-only play, neither starter has much of a resume in the Cy-Hawk rivalry.

Hall’s breakout game for the Cyclones, a 26-carry, 132-yard effort against West Virginia, came three games after he ran once for no gain in ISU’s 18-17 loss to Iowa two years ago.

Goodson carried three times in that game for 16 yards.

He went on to deliver for the Hawkeyes, becoming the first true freshman in Iowa history to lead the program in rushing and following that with the all-conference effort a year ago.

The Iowa junior appreciates what Hall brings to the field for ISU.

"I feel like I have more versatility than he does. He’s a big dude, has a lot of power. I can get out of the backfield, catch the ball a little more, probably have a little more agility," Goodson said.

"All around, he’s a good back as well. He can do the things that I can do as well, but I think I can do it at a better rate."

Iowa linebackers coach Seth Wallace believes containing Hall will be critical if the Hawkeyes hope to extend their string of five straight wins in the series.

"Breece Hall, when he’s out in the open, he’s as good as there is in college football," Wallace said. "We’ve got to do everything we can to keep him inside and in front of us."

Iowa State coach Matt Campbell said the same will be true for the Cyclones as they attempt to deal with Goodson.

"We know they want to run football and Tyler has shown the ability to make big runs. He’s a great finisher of runs. He showed that early in the game last week (with a 56-yard touchdown run)," Campbell said. “We always want to run the ball, too. … Can we run it better than we did last week? Yes, and we will need to."

Iowa State running back Breece Hall runs the ball as he eludes a tackle by Northern Iowa defensive back Jevon Brekke during the first half of last Saturday's game in Ames.

Iowa running back Tyler Goodson finishes a 56-yard touchdown run during the first half of the Hawkeyes win last Saturday against Indiana in Iowa City.