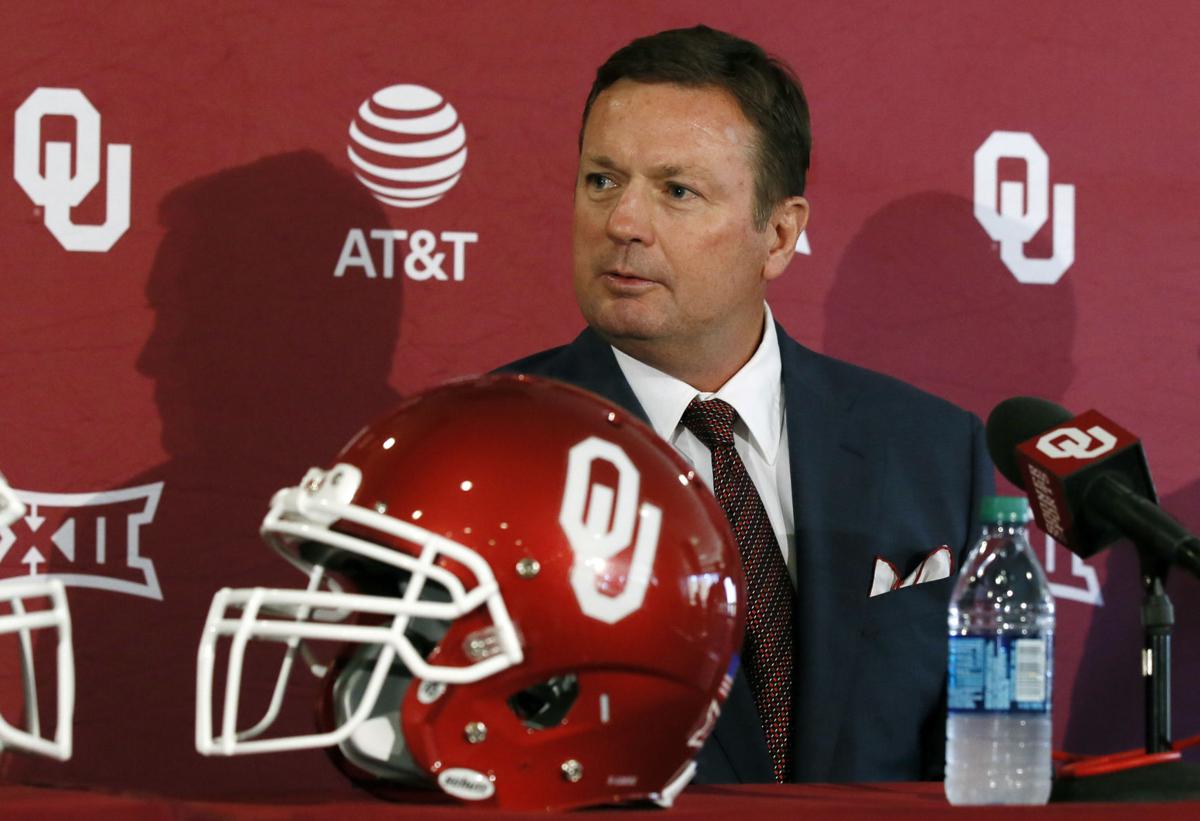 Oklahoma football head coach Bob Stoops, an all-Big Ten defensive back for Iowa who began his coaching career with the Hawkeyes, was named Monday as a member of the 2021 College Football Hall of Fame induction class. 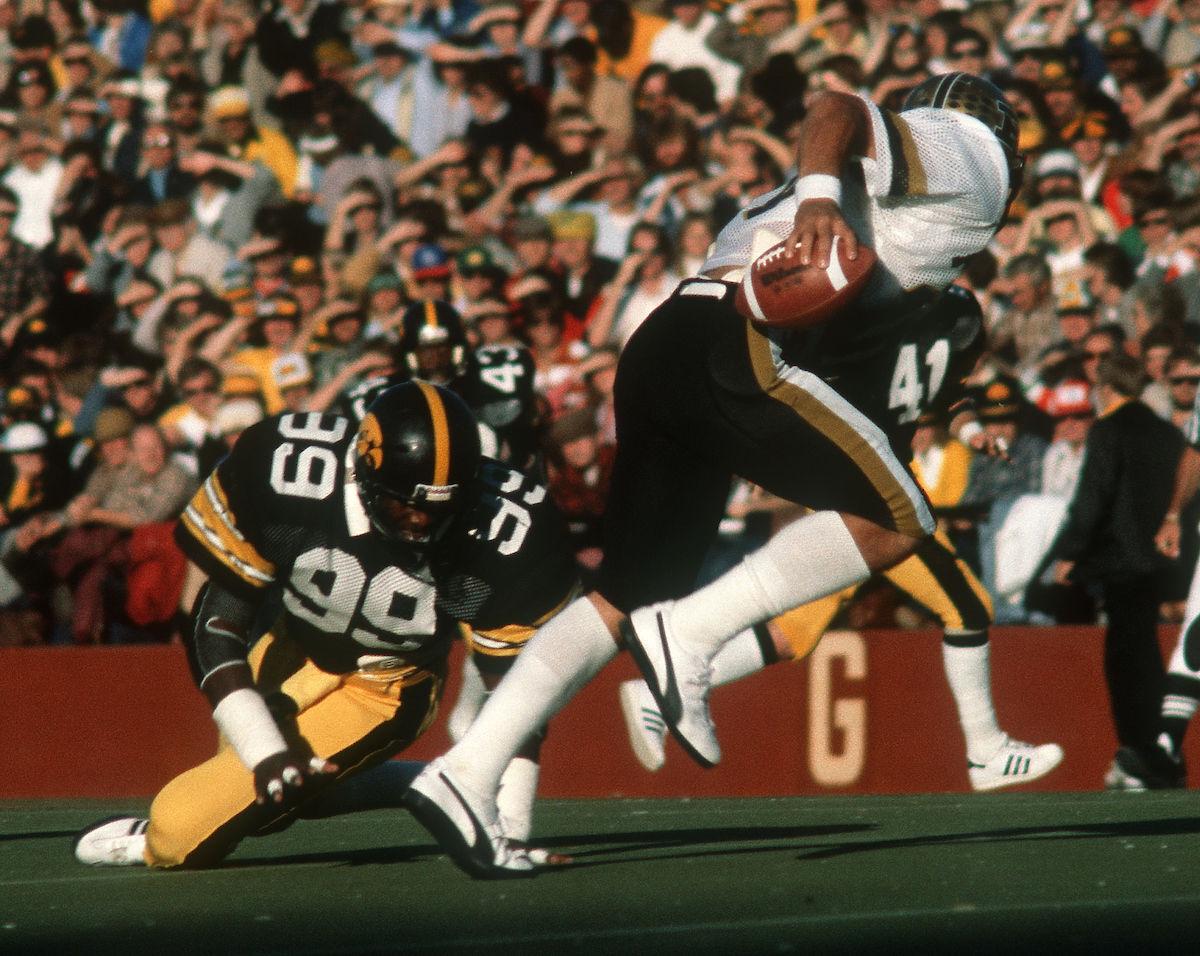 Andre Tippett (99) makes a tackle for Iowa during a 1981 game against Purdue at Kinnick Stadium. 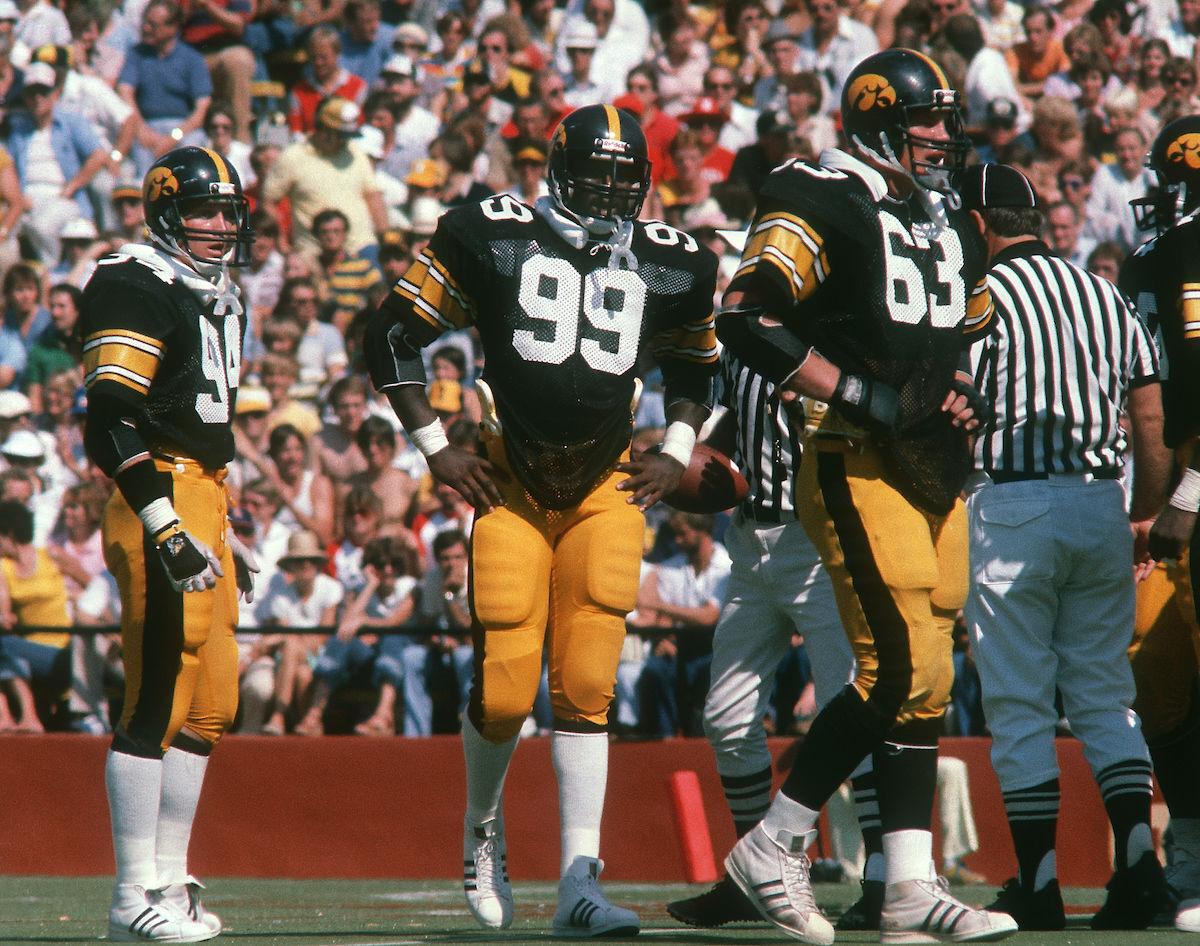 Andre Tippett (99) established an Iowa record with 153 yards on the 20 tackles for a loss he recorded in 1980, a school record for yardage that still stands.

Dominant defensive end Andre Tippett and defensive back Bob Stoops, teammates on a 1981 Iowa team which won a Big Ten championship and played in a bowl for the first time since 1959, were among 13 individuals named by the National Football Foundation to the 2021 College Football Hall of Fame induction class.

Tippett was recognized for his play on the field as a consensus all-American, one of 11 players named to this year’s hall of fame class, while Stoops is one of two coaches being honored. He was selected for his work as a coach at Oklahoma as part of a career which began at his alma mater.

Both expressed appreciation for the honor they will receive on Dec. 7 during the National Football Foundation’s annual awards dinner.

“Thank you all. This is amazing. Go Hawks,’’ Tippett wrote on Twitter shortly after his selection was announced.

In an interview with ESPN, which unveiled this year’s hall of fame class, Stoops said, “Being the son of lifetime high school coach, I have so much respect for our profession. I feel honored and humbled to be selected for the hall of fame.’’

Tippett and Stoops were selected from a group of 78 players and seven coaches from the Football Bowl Subdivision under consideration for the 2021 induction class.

They join 15 other individuals with ties to the Iowa program who have been inducted as either players or coaches into the College Football Hall of Fame and they are first Hawkeyes selected for induction since linebacker Larry Station in 2009.

Tippett earned his honor one stop at a time.

The Newark, N.J. native was a two-time first-team all-Big Ten selection who as a junior established an Iowa single-season record for yardage when he dropped opponents for 153 yards in losses on the 20 tackles for a loss he recorded in 1980. That school record still stands.

The following year, he joined Stoops in helping the Hawkeyes to an 8-4 record and a Rose Bowl berth, the program’s first in more than two decades.

Tippett, in an interview with Iowa’s athletics department website, said the personalities on that 1981 team allowed the Hawkeyes to thrive.

“I knew when I was going down a dark alley with Brad Webb, Pat Dean, Tracy Crocker, Lou King, Mark Bortz, Bobby Stoops, Mel Cole and Todd Simonsen, I didn’t have anything to worry about,’’ Tippett said.

“We had great football players and we came to ball. Bottom line, if I had to do it all over I wouldn’t want to do it with any other guys.’’

Drafted by the New England Patriots in the second round of the 1982 draft, Tippett went on to play 11 NFL seasons.

He was inducted into the Pro Football Hall of Fame in 2008 after spending his entire professional playing career with the Patriots. Tippett still works for the organization as its executive director of community affairs.

Stoops was a four-year starter in the Hawkeye secondary, earning all-Big Ten honors in 1982 during a season when he was named among the most valuable players on the Iowa team.

He began his coaching career on Hayden Fry’s staff in 1983, filling volunteer and graduate assistant roles before joining Dick Crum’s staff at Kent State in 1988. Stoops went on to work as an assistant at Kansas State and Florida before being named the head coach at Oklahoma in 1999.

Over 18 years there, he never had a losing record. Stoops won a school-record 190 games during his tenure while leading the Sooners to the 2000 national championship and six Big 12 titles.

With his selection, Tippett will be eligible for inclusion on the Kinnick Stadium Wall of Honor. Established by the Iowa athletics department prior to the 2013 season, the other nine players on the Wall of Honor have their name and jersey number displayed on the exterior of the press box at football stadium.

Rudy Hubbard of Florida A&M joins Stoops as the coaches honored in this year's class.

Menke made most out of tough go with Vikings

Kelton Copeland remembers the spring of his senior year of high school well.

Maybe the Augustana College football team should sport new uniforms for every game, if Friday's outing was any indication.

IOWA CITY — On the first play of a controlled scrimmage Saturday, Tyrone Tracy Jr. welcomed fans back to Kinnick Stadium.

There will be plenty to keep an eye on Saturday when Iowa holds the first of two public football practices.

Noah Fenske began spring practices listed as the second-team center on the Iowa football depth chart, but Monday he indicated he plans to transfer.

Success began in the trenches for the St. Ambrose football team this season, something reflected Friday when the Mid-States Football Associati…

Oklahoma football head coach Bob Stoops, an all-Big Ten defensive back for Iowa who began his coaching career with the Hawkeyes, was named Monday as a member of the 2021 College Football Hall of Fame induction class.

Andre Tippett (99) makes a tackle for Iowa during a 1981 game against Purdue at Kinnick Stadium.

Andre Tippett (99) established an Iowa record with 153 yards on the 20 tackles for a loss he recorded in 1980, a school record for yardage that still stands.