A nine-yard catch in the season-opening win over Southeast Missouri State. His first touchdown as a Cyclone. A long time coming, but merely the beginning for an athletic and versatile player who’s eager to do more.

“It was a relief, to say the least,” said Hanika, who hopes to continue aiding the offense in Saturday’s 11 a.m. (ESPN2) Big 12 season-opener against No. 17 Baylor (2-1) at Jack Trice Stadium. “It had been four years since I had caught a ball in a game. It was just a big weight off my shoulders.”

ISU receiver Sean Shaw Jr. raced to the end zone to help him celebrate. So did top receiver Xavier Hutchinson and the entire ISU offensive line. Hanika exhaled and smiled as he helped set the Cyclones on course to a 3-0 start.

“It really felt good and it felt like I had finally made it in college football,” he said.

Hanika doesn’t start. Easton Dean is listed as the No. 1 tight end, while stalwart Jared Rus holds down the “F” position. But Hanika’s impact on the offense has been noteworthy. He caught a 12-yard touchdown pass from Hunter Dekkers in last Saturday’s 43-10 win over Ohio — becoming the first Cyclone tight end other than Charlie Kolar and Chase Allen to score two or more touchdowns in a season since former standout E.J. Bibbs reached the end zone eight times in 2014.

All three of the aforementioned players are or were on NFL teams. So Hanika’s helping ensure that ISU’s tight ends room doesn’t precipitously dip in terms of production, but he’s not alone.

Dean has one catch for 15 yards and true freshman Tyler Moore has two catches for 28 yards. All three are strong and relatively fast, given their expansive frames.

Hanika had zero scholarship offers after scoring 18 touchdowns as a senior at Hayden High School in Topeka, Kan. He also suffered a major knee injury, so after enrolling at Butler Community College, he decided to redshirt, which turned out to be a fruitful decision.

“Getting to practice against some of those guys, a lot of them that played in the Big 12 like (former Texas defensive end) Jacoby Jones, (former Texas linebacker) Juwan Mitchell and (Baylor defensive back) Al Walcott — who we’ll see this weekend — it really helped me just progress overall as a player and sharpen my skills,” said Hanika, who has turned half his catches this season into touchdowns. “It’s been a blessing.”

Hanika, a junior, feels the same way about sitting behind Kolar and Allen while contributing on special teams the past two seasons. It was a difficult, but valuable experience. Now he’s catching passes for the first time in four years, exulting in the end zone not once, but twice — and who knows where he goes from here?

“It really paid off in the end,” the 6-6, 238-pound Hanika said. “Not looking for that instant gratification that coach Campbell talks about all the time and just keeping your head down and working. Eventually you’re gonna get your shot and it’s (about) what you do with your shot when it comes.

"I feel like I’ve put myself in a great position for that. I feel like it’s paying off, but we’ve still got a lot more work to do.”

IOWA CITY — Luke Lachey believes little things are making a difference as he sees his role increasing on the Iowa offense.

College football: SAU's Oshin all business -- on, off field

The Hawkeyes mustered less than 100 yards for almost three quarters Saturday in a 27-14 setback to Michigan.

IOWA CITY — Michigan found Saturday to be the perfect day for a drive.

A look at the storylines and statistics surrounding Iowa's Saturday game against Michigan.

Batterson's ballot: Plenty of change is no October surprise

There is no shortage of change on my ballot for this week's Associated Press college football poll.

Four things the football teams from Michigan and Iowa can do to position themselves for success in Saturday's 11:05 a.m. game at Kinnick Stadium: 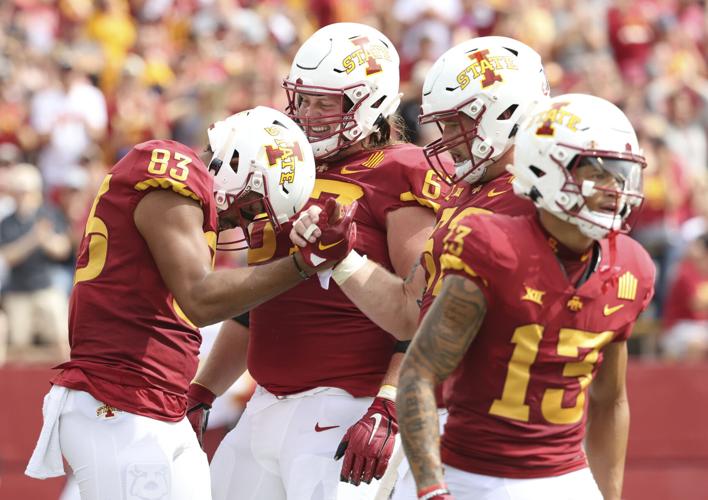 Iowa State tight end DeShawn Hanika (83) celebrates with teammate after scoring a touchdown during the first half of Saturday's game against Ohio in Ames. It was Hanika's second touchdown of the season. 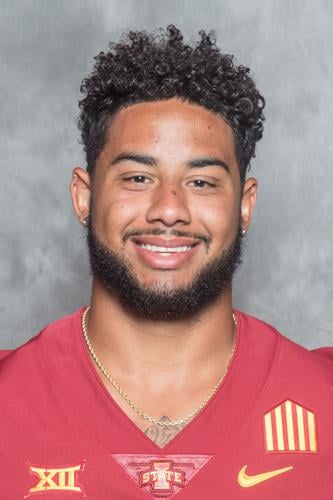