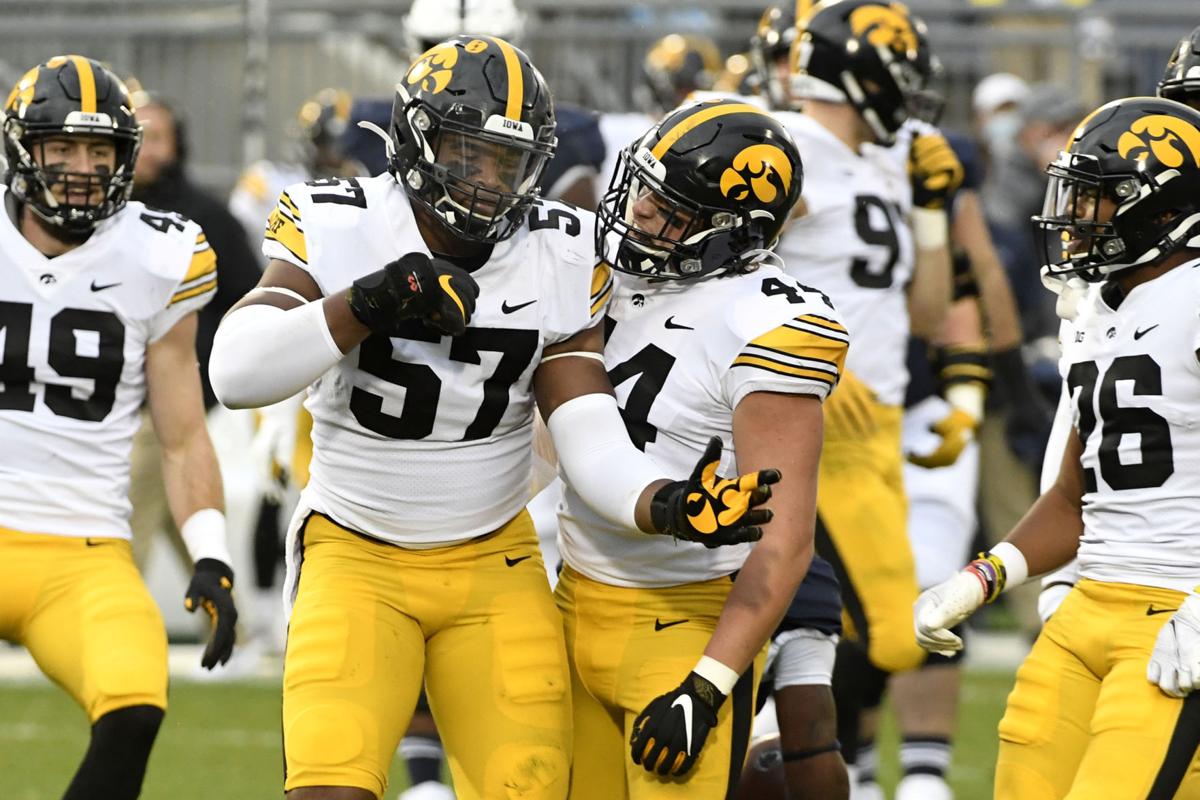 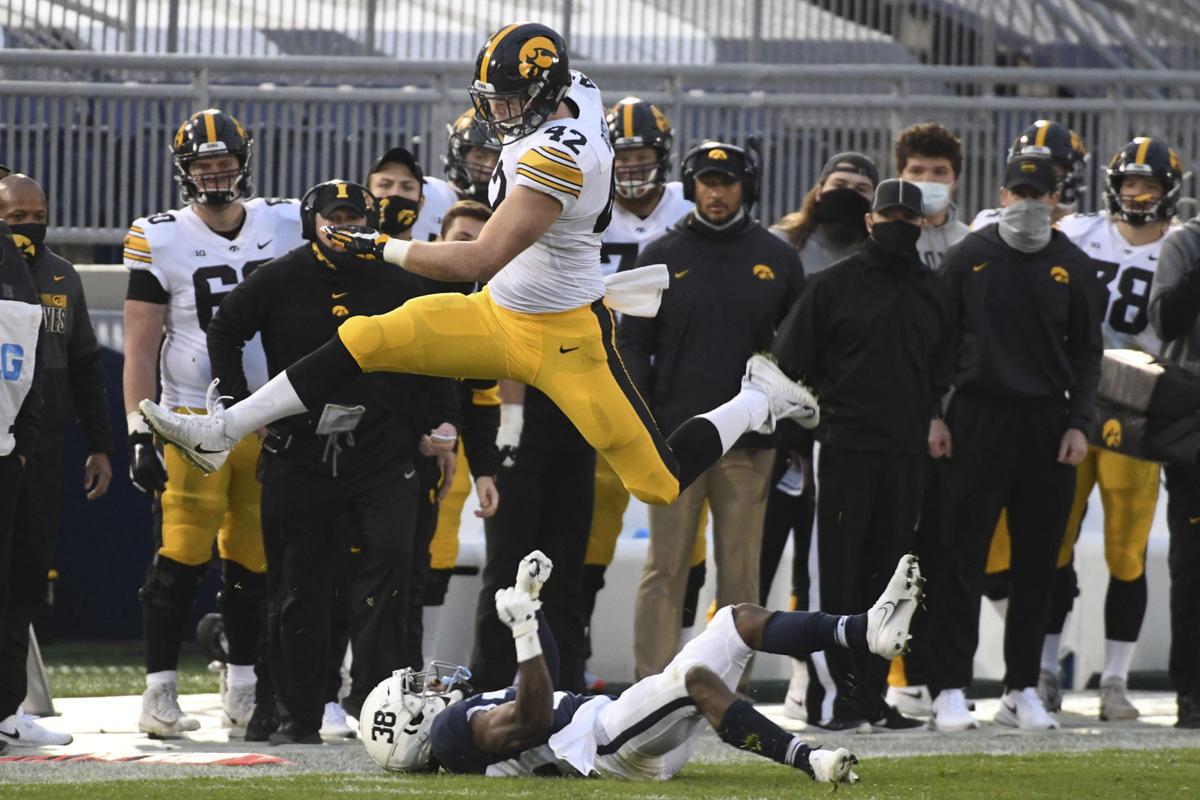 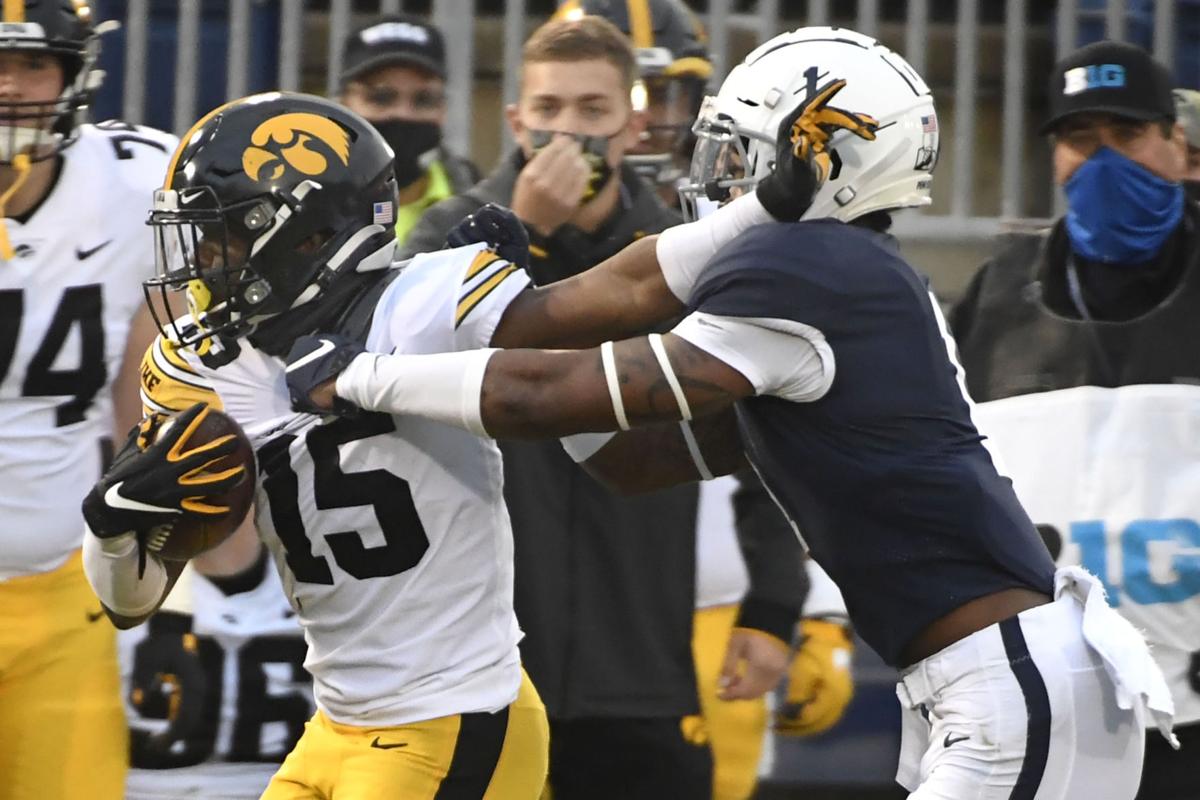 UNIVERSITY PARK, Pa. — When Sean Clifford came off the bench to bring a little spark to a struggling Penn State football team, Chauncey Golston and Daviyon Nixon showed up with extinguishers.

The two Iowa defensive linemen wrapped their arms around Nittany Lions passes in the fourth quarter Saturday, helping coach Kirk Ferentz reach a milestone as the Hawkeyes celebrated a 41-21 victory at Beaver Stadium that left Penn State 0-5 for the first time in 134 seasons of football.

Nixon, who tipped a pass to Golston to thwart a drive in a 10-point game with 9 minutes, 42 seconds remaining, added the exclamation point by returning an interception 71 yards for a touchdown with 1:58 to play.

The win, Iowa’s first in its last seven tries against the Nittany Lions, made Ferentz just the fourth coach in Big Ten history to earn 100 conference victories.

"Things were starting to get a little too interesting. We miss a field goal. Guy comes in and gets two quick scores. All those things start to run through the mind. Is this going to be one of those stories? … But, the guys found a way to get it done," Ferentz said.

"The defensive line stepped up and made a difference. The front four, those guys played really well."

Iowa’s line play on both sides of the ball initially helped the Hawkeyes seize control of a game Penn State led 7-3 after one quarter.

The Hawkeyes scored 21 points in the second quarter and added seven more on a 3-yard quarterback sneak by quarterback Spencer Petras to open a 31-7 lead just past the midpoint of the third quarter.

Clifford, replaced as Penn State’s starting quarterback, came off the bench minutes later and delivered a couple of quick scores that made Iowa pay for its mistakes.

On the first snap Clifford took after a Petras fumble put the ball in the Nittany Lions hands with 4:09 to go in the third, he hit Brenton Strange with a 28-yard touchdown pass.

Iowa’s next possession ended with a missed 50-yard field goal try and Clifford repeated his initial feat, hitting Jahan Dotson with a 68-yard scoring pass over the middle to cut the Iowa lead to 31-21 with seven seconds to go in the third quarter.

The Hawkeyes had to punt on the ensuing possession, but Golston pulled down a jump ball that Nixon had tipped to give the ball back to Iowa.

The teams traded punts before the 6-foot-3, 305-pound Nixon collected the Nittany Lions’ fourth turnover the game, jumping in front of a Clifford pass and rumbling with it 71 yards for the first touchdown he said he scored at any level of football.

"My first mindset was to run through the quarterback, but I saw the right tackle was close and I thought, ‘I’ve got to go score,'" Nixon said.

It didn’t surprise teammates that Nixon reached the end zone.

Nick Niemann, whose 17 tackles were the most collected by a Hawkeye since Anthony Hitchens had 19 against Iowa State in 2012, called Nixon one of the better athletes on the Iowa team.

"I’m just happy he made it," Niemann said. "He’s one of those guys who always had a nose for the ball."

The Hawkeyes demonstrated that as a group on their way to a third straight win, limiting Penn State to 62 rushing yards and having 10 players contribute to a collection of 10 tackles for a loss that included five sacks of Clifford and the starter he replaced, Will Levis.

"It was just everyone trying to get to the ball," Niemann said.

Penn State fumbled the ball away twice as well and defensive end Zach VanValkenburg recovered both.

His first came after Iowa erased the 7-3 advantage the Nittany Lions had taken with 2:12 left in the opening quarter on a 6-yard touchdown run by Keyvone Lee.

Iowa answered on the ensuing series, opening a 21-point second quarter with a 10-yard touchdown run by Tyler Goodson that put the Hawkeyes in front to stay with 14:35 left in the second quarter.

Sargent’s second score came after a Jack Heflin sack slowed a drive and left Penn State in a fourth-and-2 situation in the final minute of the half.

The Nittany Lions went for the first down, but an incomplete pass put the ball in Iowa hands at the Penn State 49-yard line with :53 to go.

Petras, who completed 18-of-28 passes for 186 yards, connected on four straight to move the ball to the 1-yard line where, after an incompletion, Sargent scored with seven seconds left in the quarter.

"We had all three timeouts, the guys made a couple of plays and we got the touchdown," Petras said. "It was a good way to end the half."

CHAMPAIGN — The Illinois football team will not play No. 4 Ohio State on Saturday.

No shortage of motivation for Hawkeyes, Huskers

Motivation won’t be an issue Friday when the football teams from Iowa and Nebraska renew acquaintances at Kinnick Stadium.

After-thoughts from Iowa’s 26-20 victory over Nebraska:

Iowa athletics reported four positive results from among 579 COVID-19 PCR tests administered during the past week.

IOWA CITY — Keith Duncan didn’t get the chance to seal this year’s Iowa football win over Nebraska with a kiss.

IOWA CITY — Three minutes into the third quarter Friday afternoon at Kinnick Stadium, Iowa’s football team was struggling with a bit of an ide…

Iowa finds itself in a familiar situation on the practice field as it prepares for Friday’s game against Nebraska.

Iowa State at Texas at a glance