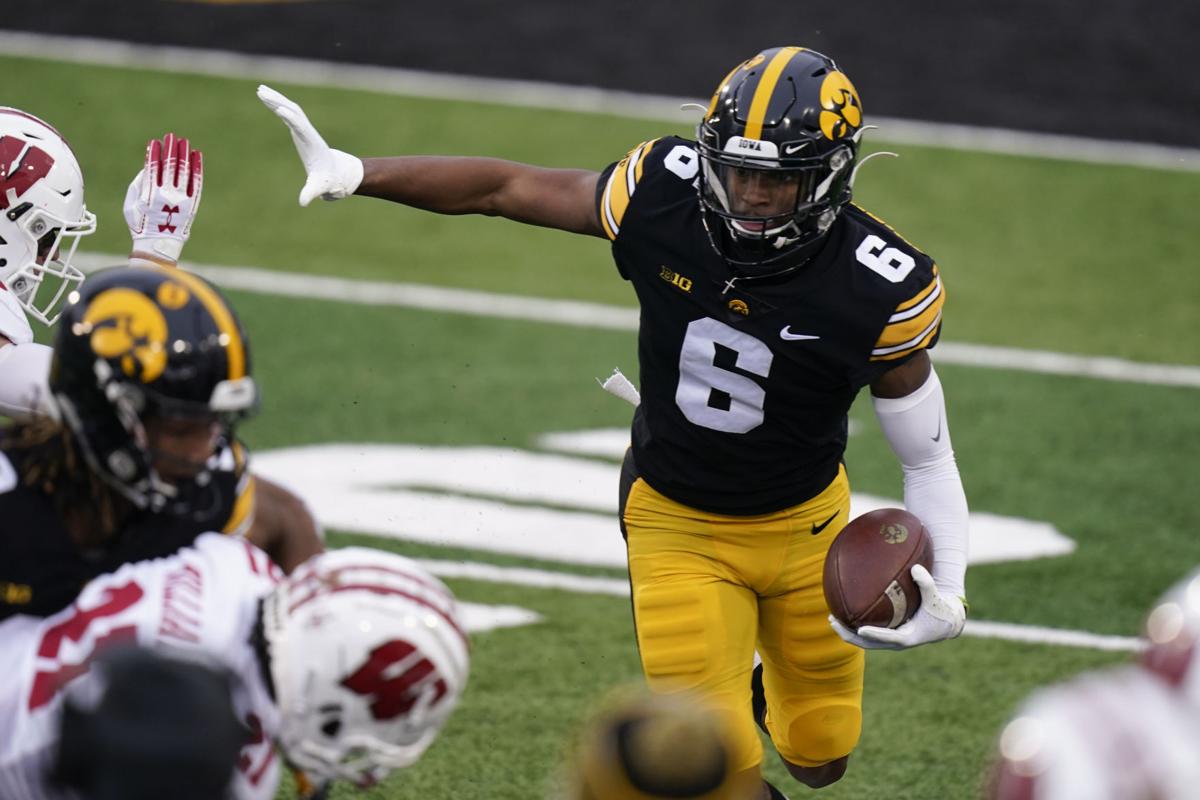 Ihmir Smith-Marsette runs up field during the first half of a game against Wisconsin this past season. Smith-Marsette hopes to hear his name called at the NFL draft in a couple of weeks. 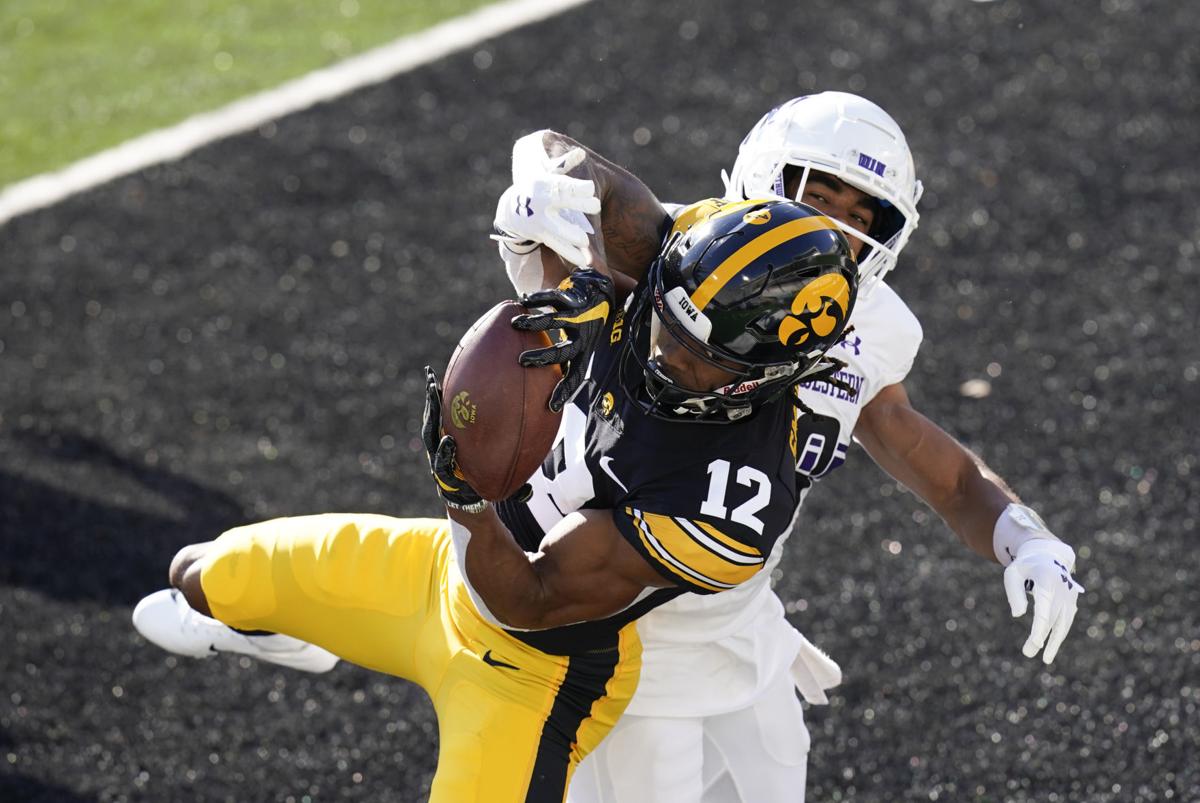 Iowa receiver Brandon Smith (12) catches a touchdown pass in front of Northwestern defensive back Cameron Ruiz during a game last October. Smith is one of two Hawkeye receivers in this draft class hoping to catch on with an NFL team.

Smith and Smith-Marsette have hopes of becoming the first Hawkeye receivers to be selected in the NFL Draft since 2012, but they find themselves as part of a draft class that is loaded with receiving talent.

“After years of talk about how colleges weren’t producing enough receivers, this year there is an incredible group of 40 receivers who are of draft quality, 14 or 15 who could go in the first or second rounds," ESPN draft analyst Mel Kiper Jr. said last week.

"It is a class that is not only deep with outside guys, but with slot receivers, return guys. It would take an hour to go through all the receivers who are legitimate draft possibilities.’’

Smith and Smith-Marsette are putting in the time it takes to get noticed.

While there was no actual NFL Combine this year, both Smith and Smith-Marsette were among five Hawkeyes to receive Combine “invitations’’ from the NFL, a recognition of their level of play heading into the draft which begins on April 29.

While the Alabama tandem of Devonta Smith and Jaylen Waddle and LSU’s Jamarr Chase are likely first-round choices, the Hawkeyes’ draft prospects at the receiver position are likely at best regarded as third-day draft possibilities.

That hasn’t deterred either from working to become the first receiver to complete his college career as a Hawkeye to catch a pass in an NFL game since Tim Dwight in 2007.

Video of Smith recording a 44-inch vertical leap at the House of Athlete Combine in March — an effort that would have been the second best at last year’s NFL Combine — quickly made the rounds last month.

Smith-Marsette has been pitching his abilities as a return man as well, pointing out that the 28.8 yards he averaged on 53 returns during his Iowa career is the second-best average in Big Ten history and another way he can help NFL organizations.

Both are also relying on the resumes they built over 40-plus games with the Hawkeyes.

Smith, who was a state high jump champion in Mississippi, caught 91 passes for 1,046 yards and nine touchdowns for Iowa.

Smith-Marsette finished 18th on the Hawkeyes’ career receiving yards list with 1,615 yards with 110 receptions including 14 of the 20 touchdowns he scored for Iowa over the past four seasons.

He believes his ability to return kicks could help him secure an opportunity to become the first Hawkeye receiver since Marvin McNutt to be picked in the draft.

“I feel like starting off, I will be a special teams guy, return kicks or punts and be a number two receiver, then working into the offense more,’’ Smith-Marsette said.

But, he believes both he and Smith have shown what it takes as a receiver to compete at the next level.

“Last fall, what the wide receivers did on the field, we showed that we can bring that to games on Sunday,’’ Smith-Marsette said.

“Brandon made some exciting catches and I was able to make some catches, do some things. We bring different dynamics to the field, but all the stuff we’ve done on Saturday we can do on Sunday.’’

Smith believes the different skill sets can help each receiver.

“We’re two different guys, different styles of receivers, but we both have what it takes to get to the league and succeed in the league,’’ Smith said. “Ihmir’s a speedy guy who can run around you while I can jump over you, jump through you.’’

Smith finds himself in a similar situation now to what he was in when he arrived at Iowa.

“Coming out of high school, I wasn’t highly recruited but I feel like I’ve shown here what I can do and it has gotten me ready to compete at the next level,’’ Smith said.

Smith and Smith-Marsette felt they turned in solid work at Iowa’s Pro Day last month, among limited opportunities both have had to work out in front of scouts in a year where individual workouts for teams are not being allowed because of COVID-19 restrictions.

Smith called his work in Iowa City a solid complement to what he did in Miami at the House of Athlete event.

“I’ve just tried to show that I’m a team guy and the little spurts of athleticism that I have been able to show, I’ve made sure that I capitalize on that,’’ Smith said. “I think going to Miami helped me get some exposure, the type of thing I need leading up to the draft.’’

As for the vertical leap, “I’ve been jumping since I was a kid. I jumped in high school. It’s something I can do as part of my game.’’

Smith-Marsette has marketed himself in a similar way, looking to provide NFL teams with as much information as he can.

“You have to go in believing in yourself, believing in what you are capable of, and that’s where it has to start,’’ Smith-Marsette said. “I’m going to be willing to put the work in, do what I need to do.’’

Ihmir Smith-Marsette runs up field during the first half of a game against Wisconsin this past season. Smith-Marsette hopes to hear his name called at the NFL draft in a couple of weeks.

Iowa receiver Brandon Smith (12) catches a touchdown pass in front of Northwestern defensive back Cameron Ruiz during a game last October. Smith is one of two Hawkeye receivers in this draft class hoping to catch on with an NFL team.