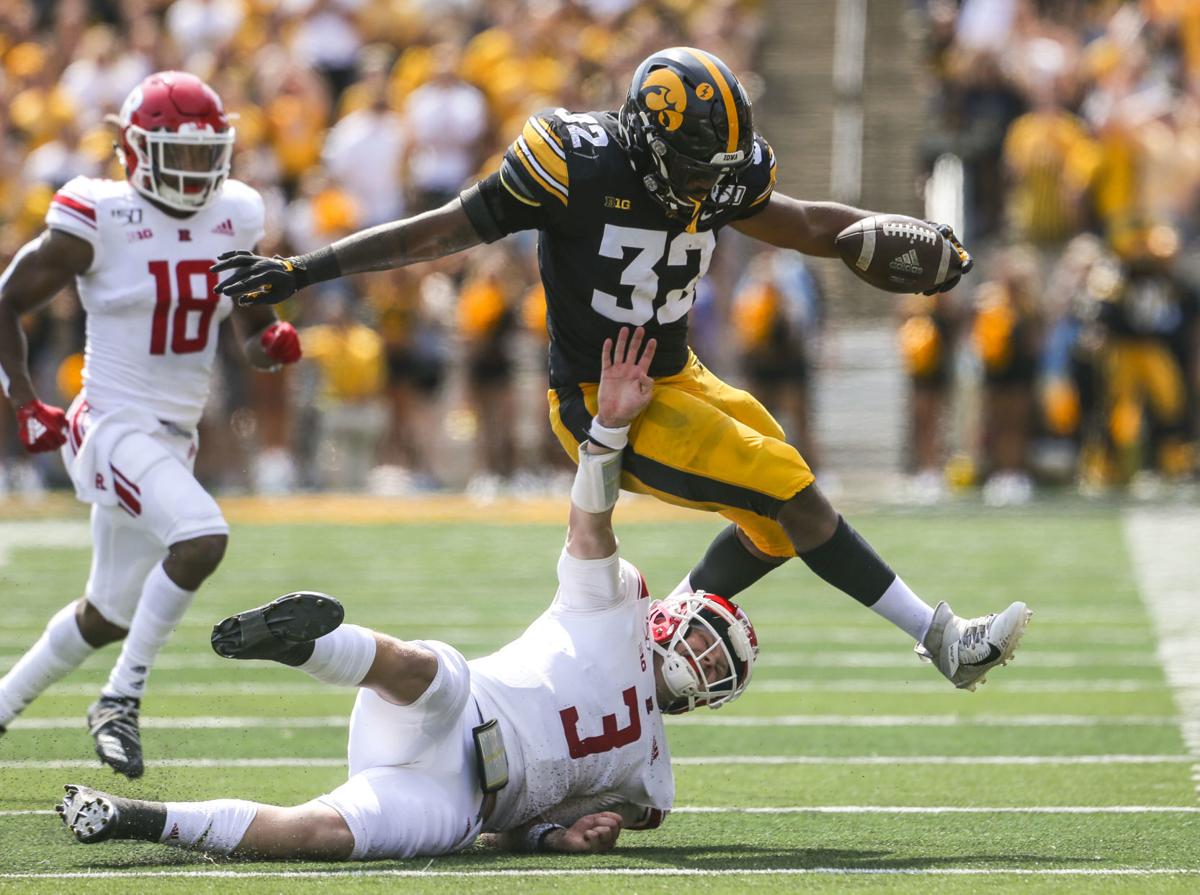 Iowa linebacker Djimon Colbert hurdles Rutgers quarterback McLane Carter after an interception during the second quarter of the Hawkeyes' win over the Scarlet Knights last season at Kinnick Stadium. 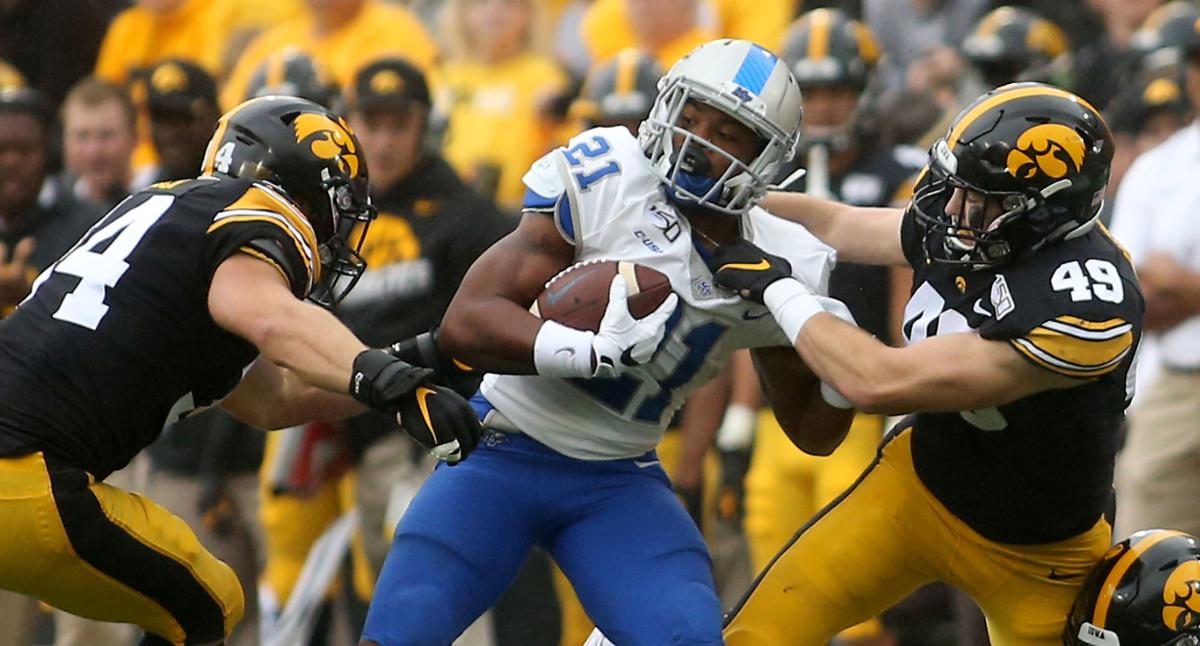 Iowa linebacker Nick Niemann, shown here hitting Middle Tennessee's Jayy McDonald during a game last season at Kinnick Stadium, is among Hawkeyes speaking out expressing their desire to play this fall as administrators weigh that against the ongoing COVID-19 pandemic.

Flexibility has become a focus at linebacker for the Iowa football team.

With the Hawkeyes' shift to a blend of defensive looks, morphing from the program’s traditional 4-3 alignment to a 4-2-5 arrangement more frequently over the past two seasons, the usage and roles of linebackers have changed.

But, the primary objective of stopping the run first against any opponent has remained at the core of Iowa’s belief system.

“There may only be two linebackers on the field at a time, so it is more competitive, but at the end of the day it comes down to doing your job wherever you are lining up,’’ linebacker Djimon Colbert said last season.

“We’re all being cross-trained inside and out, so match-ups I think come into play more than they probably have in the past and performance has a lot to do with things as well.’’

With a defensive back settling into the hybrid cash position – Amani Hooker filled the role of matching up with spread offenses in 2018 while Dane Belton and D.J. Johnson played there a year ago – Iowa has plenty of returning experience at the linebacker positions.

The Hawkeyes also have a hole in the middle, where Kristian Welch earned the bulk of snaps during his senior season.

Colbert and Nick Niemann provide Iowa with its greatest experience at the linebacker spots.

A 6-foot-1, 235-pound junior from Kansas City, Mo., Colbert has started 23 games over the past two seasons for the Hawkeyes and brings a blend of speed and strength to the position.

A converted defensive back, Colbert started all 13 games last season at the weakside linebacker spot and finished the year with 61 tackles, one interception and four pass break-ups.

Colbert will likely get a look at the middle linebacker spot when Iowa begins team work later this summer as will Niemann, a 6-4, 235-pound senior with 14 starts on his resume primarily at the outside position Iowa labels the LEO. It’s a spot where work begins in lining up over the tight end.

Niemann shifted inside on occasion a year ago while finishing the season with 32 tackles, one sack and an interception that he returned 25 yards for a touchdown in the Hawkeyes’ Holiday Bowl victory over USC.

Colbert and Niemann provide experienced options at middle linebacker, a position where sophomore Jack Campbell could also find himself in the mix after seeing action in 11 games a year ago as a true freshman.

Campbell, a 6-foot-4, 218-pound Cedar Falls, Iowa, native, brought an intensity to the field that allowed him to contribute quickly on special teams. He went on to make one start when Welch missed three games last season after suffering a stinger.

In Welch’s absence, he split time at middle linebacker with Dillon Doyle, who earlier this month announced that he had placed his named into the transfer portal and has since transferred to Baylor. With offseason gains in weight and strength, Campbell could play his way into the mix for an expanded role at middle linebacker.

Barrington Wade, a 6-1, 236-pound senior, made one start at the outside linebacker position a year ago and will continue to get a look there as the Hawkeyes work toward 2020.

There will be some younger players entering the mix during fall camp as well.

Iowa redshirted highly-recruited Jestin Jacobs last season after the 6-4, 220-pound Ohio native was slowed by an injury during his freshman season after enrolling early.

Jacobs traveled to every road game last season and with his athleticism, he is positioned for an expanded opportunity this fall and could fit in at any of Iowa’s linebacker positions.

Sophomore Seth Benson made an impact on special teams last season and the 6-0, 227-pound South Dakota native joins Jacobs in the mix for a growing role.

Logan Klemp, a 6-2, 228-pound sophomore, and 6-0, 201-pound redshirt freshman Yahweh Jeudy return as well, with Klemp fitting in more at an inside spot while Juedy having potential to back-up Colbert at the weakside position.

Iowa signed only one scholarship linebacker to its roster in the 2020 recruiting class and Jay Higgins arrives from Indianapolis Brebeuf with a production-filled resume.

At 6-2, 220 pounds, he will get his first look as a Hawkeye at an inside position. Higgins topped 145 tackles in each of his final three seasons at the prep level and in addition to earning all-state honors in football was also selected as the conference player of the year in the basketball.

Kinnick Stadium turned into a melee after third-ranked Iowa rallied from 14 points down for one of its biggest wins in program history.

A knee injury appears likely to keep an Iowa cornerback who shares the national lead in interceptions off the field in Saturday's game against pass-happy Purdue.

A weekend visit to Iowa City led the Iowa football program's latest commitment, running back Kaleb Johnson, to flip a previous decision to play at Cal.

There was plenty of good, and even a not-so-good look to be found in Iowa's 23-20 win over Penn State on Saturday.

There's a change at the top of my ballot for this week's Associated Press college football poll, but that was the easy part.

Four things the football teams from Iowa and Purdue can do to put themselves in a position for success in Saturday's 2:30 p.m. game at Kinnick…

Roberts ready for next Hawkeye challenge

Terry Roberts has seemingly been all over the place on Iowa special teams the past few years. Saturday, he'll be somewhere new -- in the Hawkeye starting lineup.

As many good things as the Iowa football team has accomplished in recent seasons, the Hawkeyes are working this week to fix a Purdue problem.

Iowa linebacker Djimon Colbert hurdles Rutgers quarterback McLane Carter after an interception during the second quarter of the Hawkeyes' win over the Scarlet Knights last season at Kinnick Stadium.

Iowa linebacker Nick Niemann, shown here hitting Middle Tennessee's Jayy McDonald during a game last season at Kinnick Stadium, is among Hawkeyes speaking out expressing their desire to play this fall as administrators weigh that against the ongoing COVID-19 pandemic.