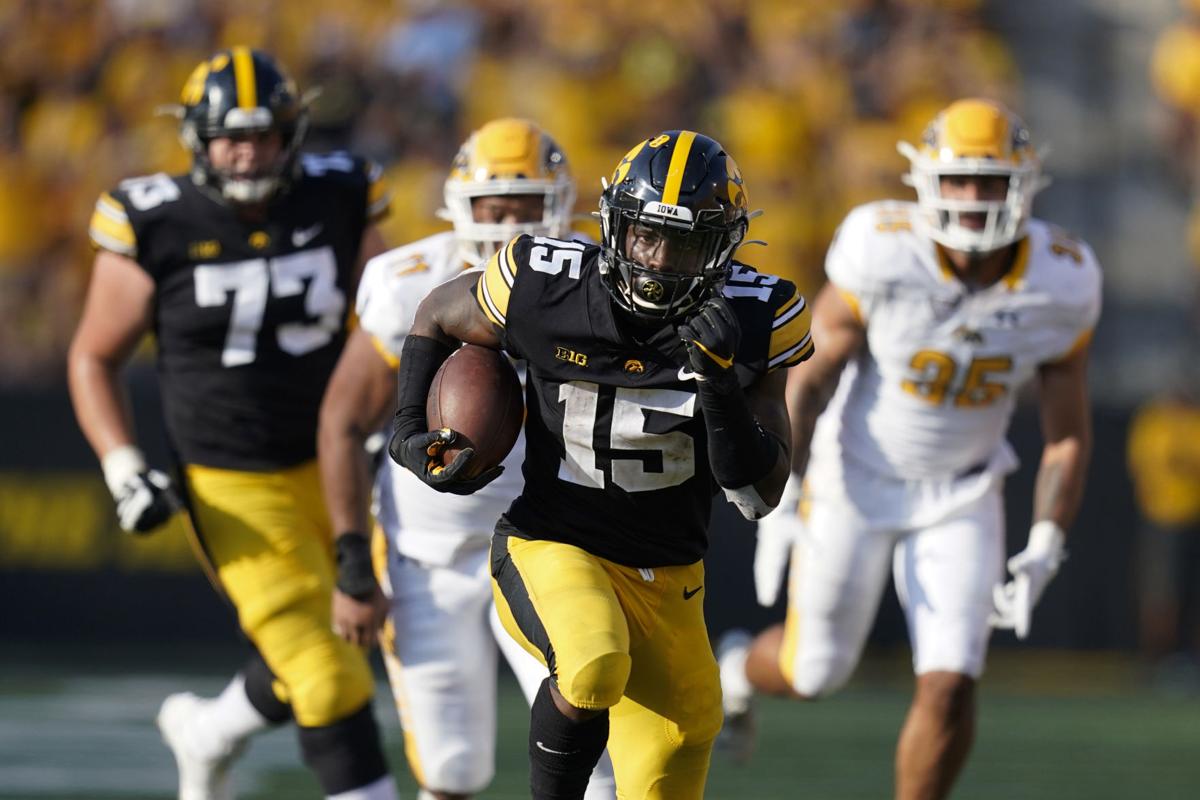 Iowa running back Tyler Goodson breaks free for a 35-yard touchdown run in a game earlier this season against Kent State. The junior enters Friday's game at Nebraska 55 yards shy of becoming the Hawkeyes' first 1,000-yard rusher since 2017. 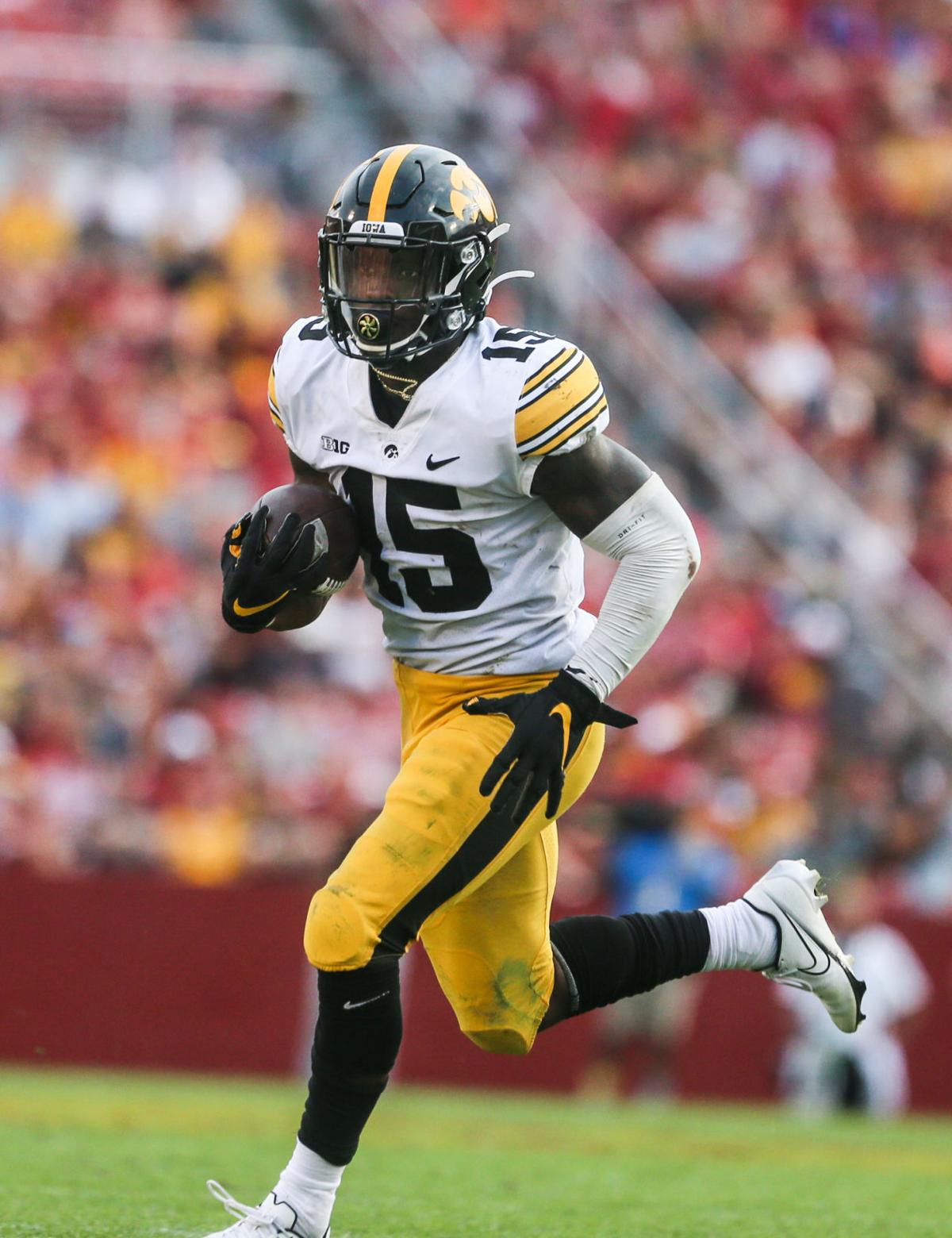 Iowa running back Tyler Goodson (15) runs the ball against Iowa State during the Cy-Hawk game at Jack Trice Stadium earlier this season.

“It’s been one of my goals since I first stepped on campus,’’ Goodson said. “I’m not going into the game saying that I have to get there, it’s not as important to me as getting the win, but yeah it would mean a lot.’’

As much as anything, Goodson sees reaching the 1,000-yard plateau as something any good running back should work to achieve.

“For a running back, getting 1,000 yards in a season is a meaningful accomplishment,’’ Goodson said. “It’s one of those standards that guys work toward. It’s been a goal of mine every season since I was in high school.’’

He went on to run for 1,437 yards as a junior and 1,180 yards as a senior when he was named as the Georgia state high school player of the year.

Goodson emerged in the Hawkeye backfield in his first season at Iowa, becoming the first true freshman ever to lead the program in rushing with 638 yards in 2019.

That work has positioned Goodson to add his name to a list of 15 Hawkeye backs who have combined for 20 1,000-yard seasons in Iowa uniforms.

He has led Iowa in rushing in 14 consecutive games, the longest streak since Goodson's first-year position coach, Ladell Betts, was the Hawkeyes' rushing leader for 37 straight games between 1998-2001.

Goodson runs for an average of 85.9 yards per game and two of the eight games he has rushed for over 100 yards in have helped the Hawkeyes add to their current string of six straight victories over Nebraska.

He ran for 116 yards in Iowa’s 27-24 win at Memorial Stadium two years ago and carried the ball a career-high 30 times for 111 yards in a 26-20 victory over the Cornhuskers last season at Kinnick Stadium.

Goodson doesn’t expect the yards to come easily against an improving Nebraska defense which allows 143.4 yards per game on the ground, 26 fewer per game now than it surrendered a year ago.

“We know they’re going to try to stop the run and it’s up to me to get every yard I can,’’ Goodson said. “Sometimes, you are in a position where you can get some decent yards. Sometimes when teams load eight guys in the box, it’s tough to get a couple, but you have to keep fighting.’’

Working behind a young line that has coped with injuries and inconsistencies, the current season has been a bit of a roller coaster ride for Goodson and the Iowa rushing attack.

“We’ve been playing catch-up pretty much all year, and we’re not out of the woods yet, but at least I think the arrow is starting to move the right way,’’ Ferentz said.

“I thought (Goodson’s) production Saturday was probably tied in with maybe the improvement we’re seeing with the guys up front.’’

The demeanor to deal with the good and the bad has kept Goodson moving forward.

Ferentz sees that regularly on the practice field and considers Goodson’s approach among the reasons Iowa is continuing to take steps forward as an offense.

“He’s got a good energy to him, a good vibe, and he likes practicing, likes his teammates,’’ Ferentz said. “You don’t see him too often look like he’s down a bit. He stays really positive.’’

Goodson has run for more than 130 yards in two of Iowa’s last three games.

He wants that momentum to continue in the Hawkeyes’ regular-season finale and has hopes of reaching that 1,000-yard milestone he believes reflects on the work of those around him as much as is does on himself.

“Iowa is a program that is known for running the football and to have a 1,000-yard rusher is something that's meaningful for the team. It says that you have a strong offensive line, good backs, teammates willing to block for each other,’’ Goodson said.

“There are a lot of good things about having a back rush for 1,000 yards including that it should put you in a position to win games.’’

It’s a benchmark that Goodson would like to achieve during the regular season, even when the yards have been hard to come by.

“I’ve just tried to stay positive and continue to come out every day in practice and games ready to work,’’ Goodson said. “I love playing football, the teamwork that’s a part of it and the challenge that’s across the line every week.’’

It’s a challenge that Goodson works to meet one step at a time.

LINCOLN, Neb. — Like a number of his teammates on the Iowa football team, Spencer Petras wasn’t feeling so hot earlier this week.

Iowa running back Tyler Goodson breaks free for a 35-yard touchdown run in a game earlier this season against Kent State. The junior enters Friday's game at Nebraska 55 yards shy of becoming the Hawkeyes' first 1,000-yard rusher since 2017.

Iowa running back Tyler Goodson (15) runs the ball against Iowa State during the Cy-Hawk game at Jack Trice Stadium earlier this season.