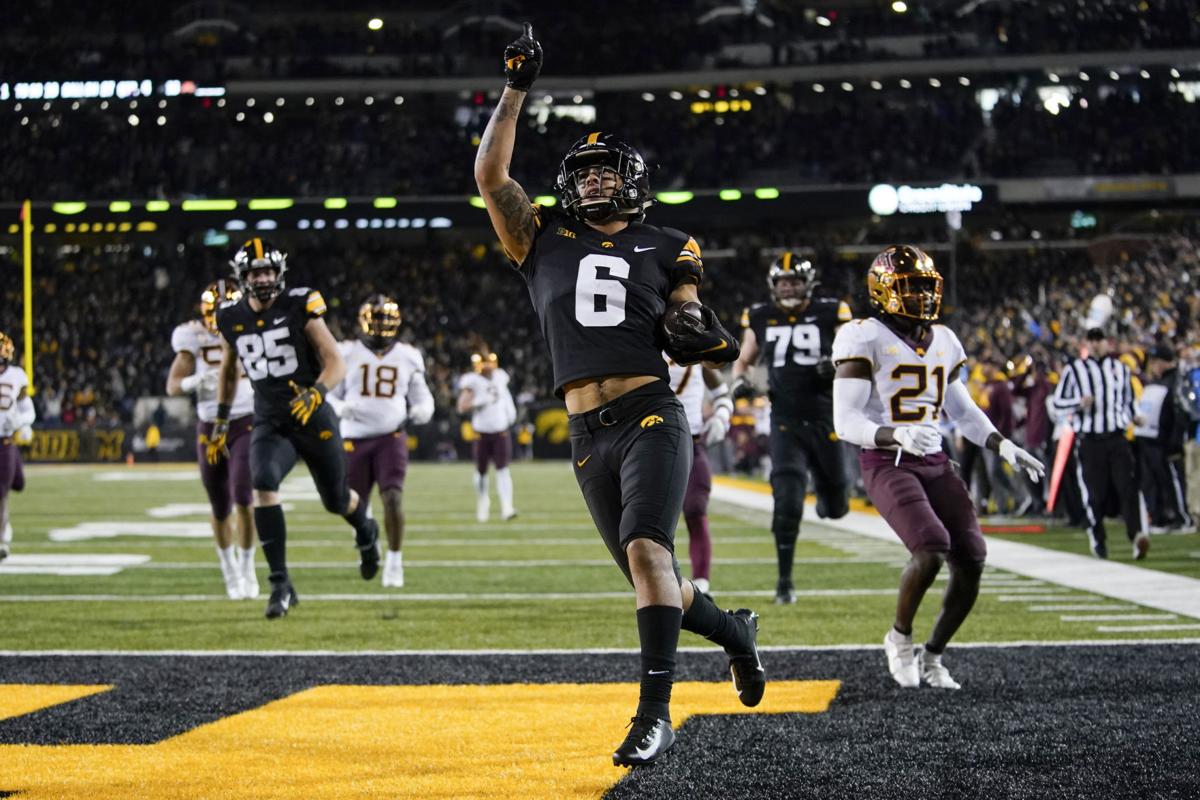 Iowa receiver Keagan Johnson celebrates as he scores on a touchdown reception during a game against Minnesota earlier this month. Johnson plays against his home state for the first time Friday at Memorial Stadium in Lincoln. 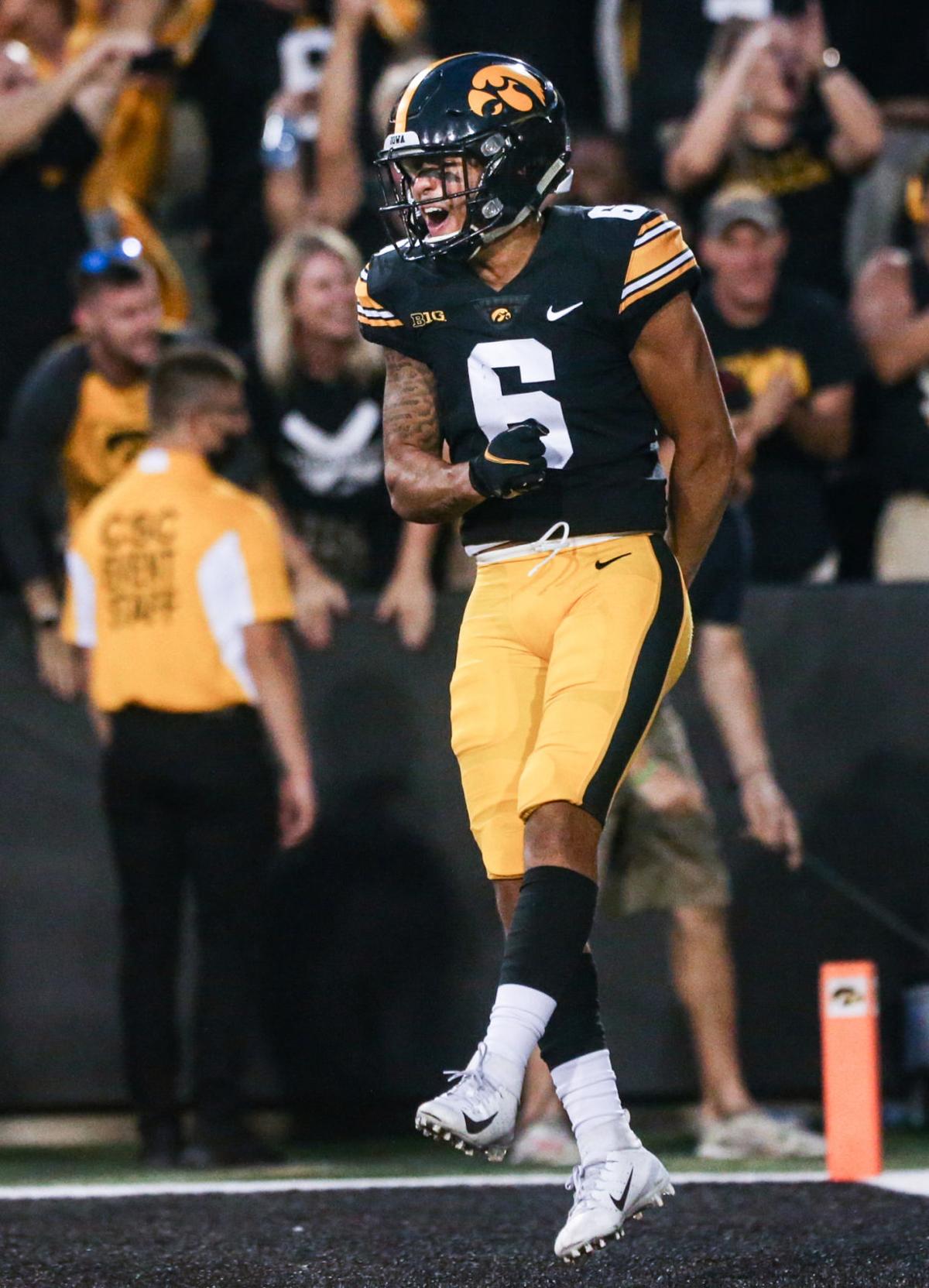 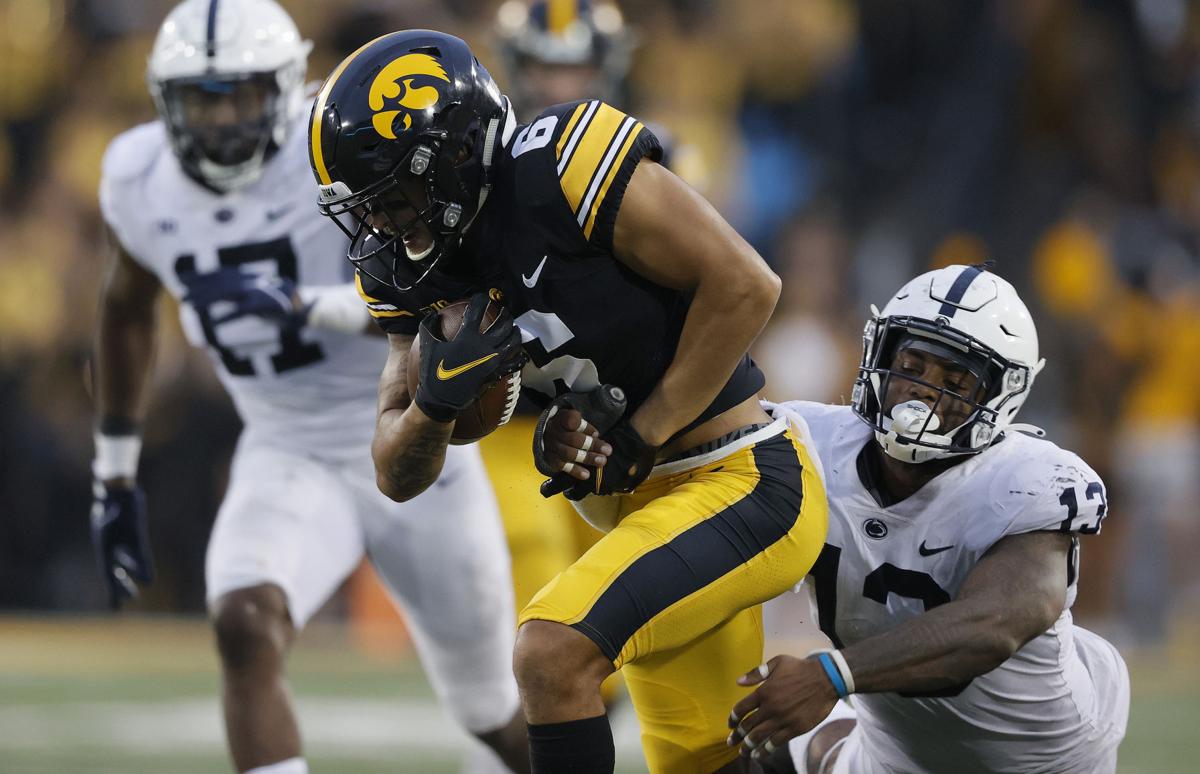 Iowa receiver Keagan Johnson runs the ball as he is tackled by Penn State linebacker Ellis Brooks (13) during a game earlier this season.

IOWA CITY — Keagan Johnson knows otherwise, but that won’t prevent the Iowa freshman receiver from trying to treat Friday’s game at Nebraska like it is just any other game.

“I need to keep my energies focused on getting ready to play football. To do anything else wouldn’t be fair to my team or myself," Johnson said.

The 12:30 p.m. Black Friday match-up between Iowa and Nebraska brings Johnson back to familiar territory.

He played one game at Memorial Stadium during an all-state career at Bellevue (Neb.) West High School, scoring on a 49-yard pass and a 50-yard run to help his team win the 2019 Class A state championship game against Omaha Westside.

But, his connection with the Cornhuskers runs much deeper that many of the routes Johnson has run while starting seven games this season for the 17th-ranked Hawkeyes.

His father, Clester Johnson, was a wingback on Nebraska teams which won national championships in 1994 and 1995, and Keagan Johnson was a regular in the sold-out stands at Memorial Stadium while growing up in the suburbs of Omaha.

“I have a lot of great memories, going to games with my dad, my family and watching the Huskers play,’’ Keagan Johnson said. “It’s going to be kind of surreal stepping onto the turf there Friday. It is going to be something special. I’m sure there will be a lot of things running through my head.’’

But mostly, Johnson simply wants to create his own memories of games played at Nebraska.

“It sounds cliché to say it, but I need to treat this like any other game, just make sure I play my game and don’t get distracted by the outside noise,’’ Johnson said.

“Obviously because of the history I have, having a father who played there and growing up in Nebraska, I know Nebraska football is the thing because there’s no pro sports there. Everything is Nebraska football.’’

And for Johnson this week, everything is about maintaining the steady approach that has allowed him to climb the Hawkeye depth chart since arriving in Iowa City in January.

“I’m doing everything I can to approach this like it just any other week,’’ Johnson said. “We want this win as a team. This is rivalry game, a trophy game, and that means a lot to all the guys here. We’re making sure we don’t get away from what we’re good at. We’re taking the same approach. We just want to win.’’

Johnson has fielded a few additional ticket requests this week, but appreciates that his father used his connections to secure a few and take some of the pressure off of his son.

“The one thing about him, he just doesn’t seem to be affected by anything thus far, and knock on wood, I hope it stays that way,’’ Ferentz said. “He just seems to go out in games — and he’s the same way in practice — and just concentrates on what he is doing.’’

What Johnson has been doing has been working for the Hawkeyes.

He has caught 16 passes this season for Iowa, averaging a team-leading 20.5 yards per reception while covering 328 yards. His yardage total is the highest on the team for a receiver, trailing only the 425 yards tight end Sam LaPorta has gained on 37 catches.

It’s the type of start to a career that Johnson envisioned when he selected the Hawkeyes over the Cornhuskers in the recruiting process.

He feels comfortable at Iowa, much like his father felt comfortable at Nebraska, and that was what he was hoping for when he reached his college decision.

Johnson said he ultimately selected the Hawkeyes because of a connection he developed with Iowa coaches.

“For me, it didn’t have anything to do with what’s going on in Lincoln or at any other school,’’ Johnson said. “It was about what stood out for me at Iowa, the genuineness of the coaching staff. That’s what brought me here. Out of all the offers, I had, I felt like this was the best spot for me.’’

He believed it was the best option he had to learn and grow, a process that continues with an objective that only requires Johnson to wear pads and a jersey, not a cape.

“Right now, I understand that I don’t need to be Superman in this game,’’ Johnson said. “I just want to win the game with my team. This game means something to me, of course, but I’m just trying my best to keep it like any other game. That’s the big thing for me.’’

Ferentz appreciates that Johnson is working to maintain his focus on the Cornhuskers and helping Iowa reach the 10-win plateau for just the 10th time in the program’s history.

“The best advice anybody can give him right now is to just play the game,’’ Ferentz said. “It’s another game, a big game, but just another game. Just do your job like you’ve been doing.’’

Recognition for Tyler Linderbaum and Phil Parker, freshmen Arland Bruce and Connor Colby moving forward and when a pass isn’t a pass are all p…

The Hawkeyes strike a nerve with a Nebraska lineman, Seth Benson on maintaining focus and Sam LaPorta and Kaevon Merriweather want to be in a …

Iowa receiver Keagan Johnson celebrates as he scores on a touchdown reception during a game against Minnesota earlier this month. Johnson plays against his home state for the first time Friday at Memorial Stadium in Lincoln.

Iowa receiver Keagan Johnson runs the ball as he is tackled by Penn State linebacker Ellis Brooks (13) during a game earlier this season.