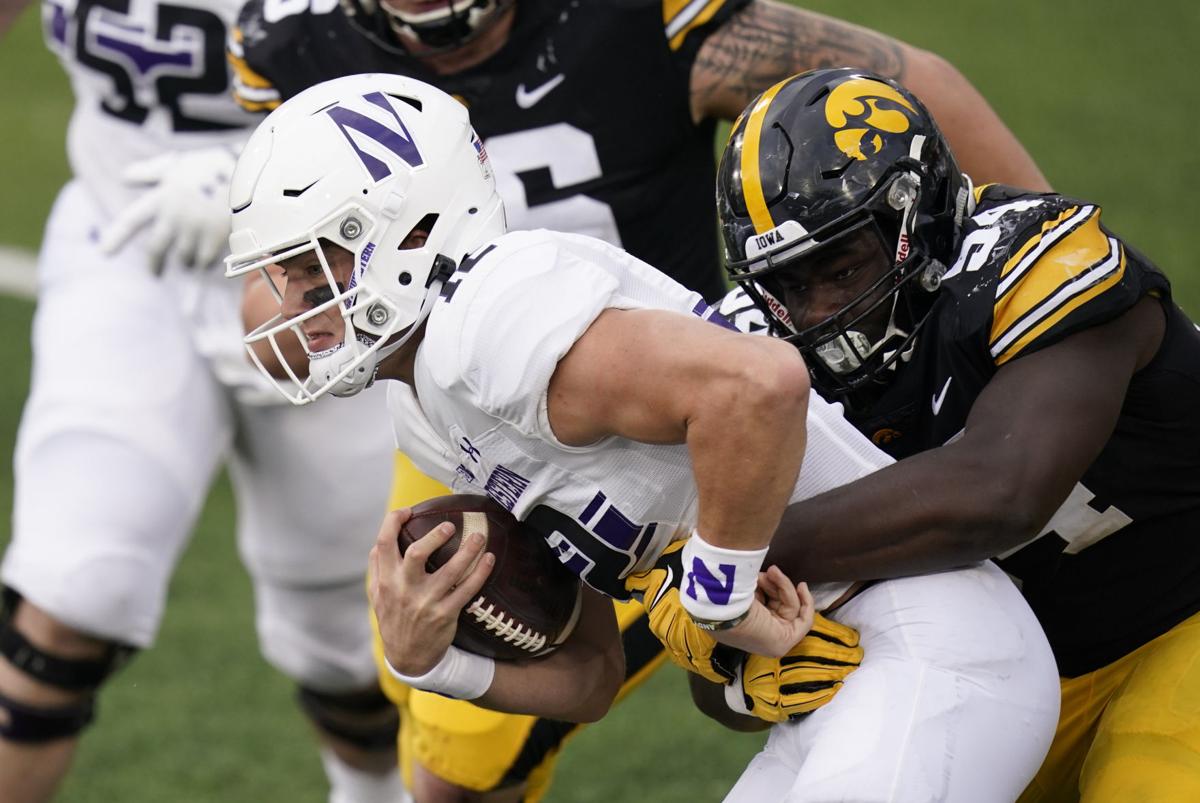 Northwestern quarterback Peyton Ramsey tries to break a tackle by Iowa defensive tackle Daviyon Nixon during a game last season. Nixon is projected to go in the second or third round of this year's NFL draft. 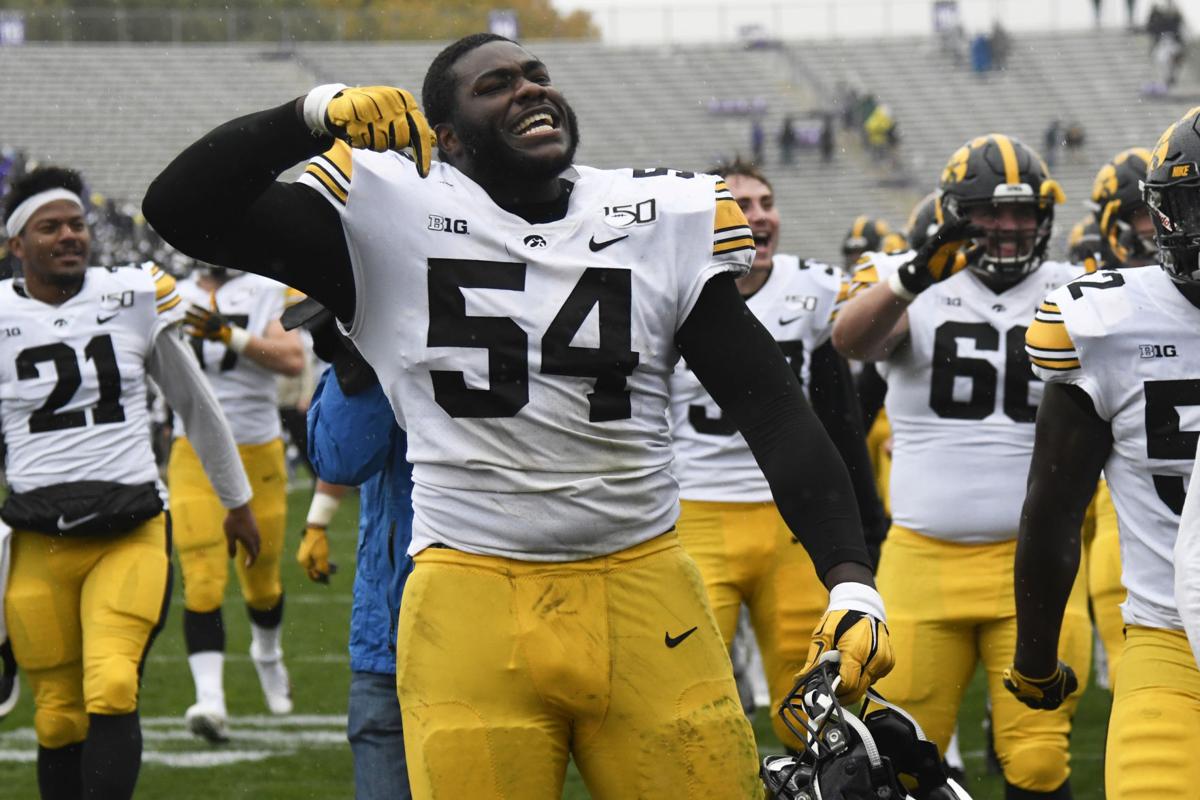 Iowa junior defensive tackle Daviyon Nixon, the Big Ten defensive player of the year, is expected to be the first Hawkeye chosen in the NFL Draft which begins Thursday night.

He spent last season living in backfields of opposing offenses, chasing down quarterbacks, running backs and whatever else got in his way.

He showed more than a little athletic ability, creating a highlight tape of his own as he weaved his way downfield while returning an interception 71 yards for a touchdown during a win at Penn State.

But, where does the Big Ten defensive player of the year fit in this year’s NFL draft class?

As NFL teams being their three-day, seven-round selection process Thursday night in Cleveland, that question remains unanswered for the Iowa defensive tackle who burst onto the scene as a first-year starter last fall for the Hawkeyes.

The unanimous consensus all-American opted to forgo his final season of eligibility at Iowa and while he continues to rank among the top defensive line prospects in this year’s draft class, his lack of lengthy resume at the college level will likely impact when Nixon hears his name called.

ESPN analyst Mel Kiper Jr. had Nixon placed as high as a first-round selection in a mock draft in December. Earlier this month, he had him slotted as a probable late second- or early third-round pick and he cited consistency in technique and experience as reasons for the change.

“Daviyon is going to be a good pick for someone,’’ Kiper said. “Had he played one more year at Iowa, he could have been a solid two or a late first-round guy.’’

Kiper labels a Nixon “a human highlight reel’’ for his demonstrative style and the athleticism he displayed during an Iowa career that included just nine starts, including all eight games the Hawkeyes played in a shortened 2020 Big Ten season.

Nixon led the Big Ten and ranked 13th nationally with 13 tackles for a loss last season, was fourth in the Big Ten with 5.5 sacks and his 45 tackles shared first among Big Ten defensive linemen in the conference.

“I really wasn’t playing for any numbers (last fall), just playing to win,’’ Nixon said. “If I’m able to go out in the NFL next year and produce those same numbers, maybe even bigger numbers, that would be great for me.’’

Nixon spent time training in Pensacola, Fla., after Iowa’s season ended, working to prepare himself for the next stop in a career that included one season at Iowa Western Community College and a redshirt year at Iowa before working his way into the Hawkeyes’ defensive tackle rotation in 2019.

The Kenosha, Wis., native played in 13 games for Iowa as a sophomore that season, recording one quarterback pressure and one assisted tackle in his first career start during a win at Iowa State.

It was a modest beginning for a player who quickly developed into one of the Big Ten’s most effective and disruptive defenders as a starter last season.

“Just a really big leap,’’ Iowa coach Kirk Ferentz said in describing Nixon’s progression. “You see that happen with players sometimes. That’s why you just never know if a guy’s working hard, has a good attitude, you just never know what is going to happen or when they’re going to make that jump.’’

In Nixon’s case, it started when he matched a career high with seven tackles in Iowa’s season-opening loss at Purdue and followed that with 11 tackles the following week in a game against Northwestern.

Of those 18 tackles, 5.5 were behind the line of scrimmage and two were sacks and one forced a fumble.

“There’s no guarantee (a player will make that type of jump), but in Daviyon’s case, it was this last season very clearly,’’ Ferentz said.

That led Nixon to make the decision to enter this year’s draft.

He has worked to gain quickness without sacrificing weight during the offseason, fielding whatever questions NFL teams have had for him in this year’s unique situation where Iowa’s pro day was the only chance scouts had to watch Nixon work in person.

All 30 NFL teams that sent scouts on the road this year were in attendance and Nixon said he generally felt “pretty good’’ with how things played out that day last month.

“None of the questions I have been getting have been uncomfortable for me. I just answer truthfully and just keep going. A lot of teams have asked me about (Iowa Western) and how I did what I did this year. Things like that,’’ Nixon said.

“There has never been a doubt in my mind about my athletic ability, my style and how I can make a team different and better.’’

Nixon now looks forward to getting that opportunity.

“This moment, it means a lot to me and to my family,’’ Nixon said. “It will be good to know that the hard work, it all paid off. I’m ready for the next step.’’

Northwestern quarterback Peyton Ramsey tries to break a tackle by Iowa defensive tackle Daviyon Nixon during a game last season. Nixon is projected to go in the second or third round of this year's NFL draft.

Iowa junior defensive tackle Daviyon Nixon, the Big Ten defensive player of the year, is expected to be the first Hawkeye chosen in the NFL Draft which begins Thursday night.