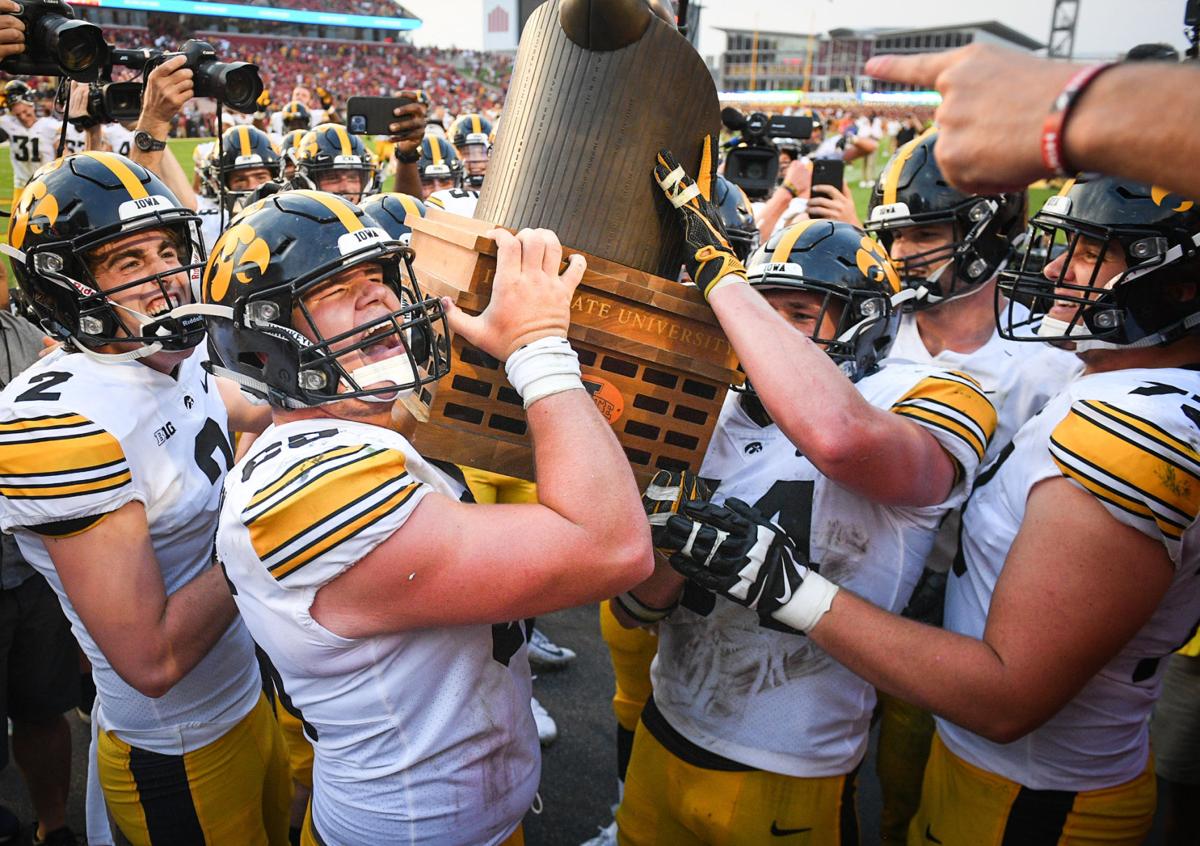 Iowa players hoist the Cy-Hawk trophy after the Hawkeyes' 27-17 victory over Iowa State at Jack Trice Stadium on Saturday in Ames. 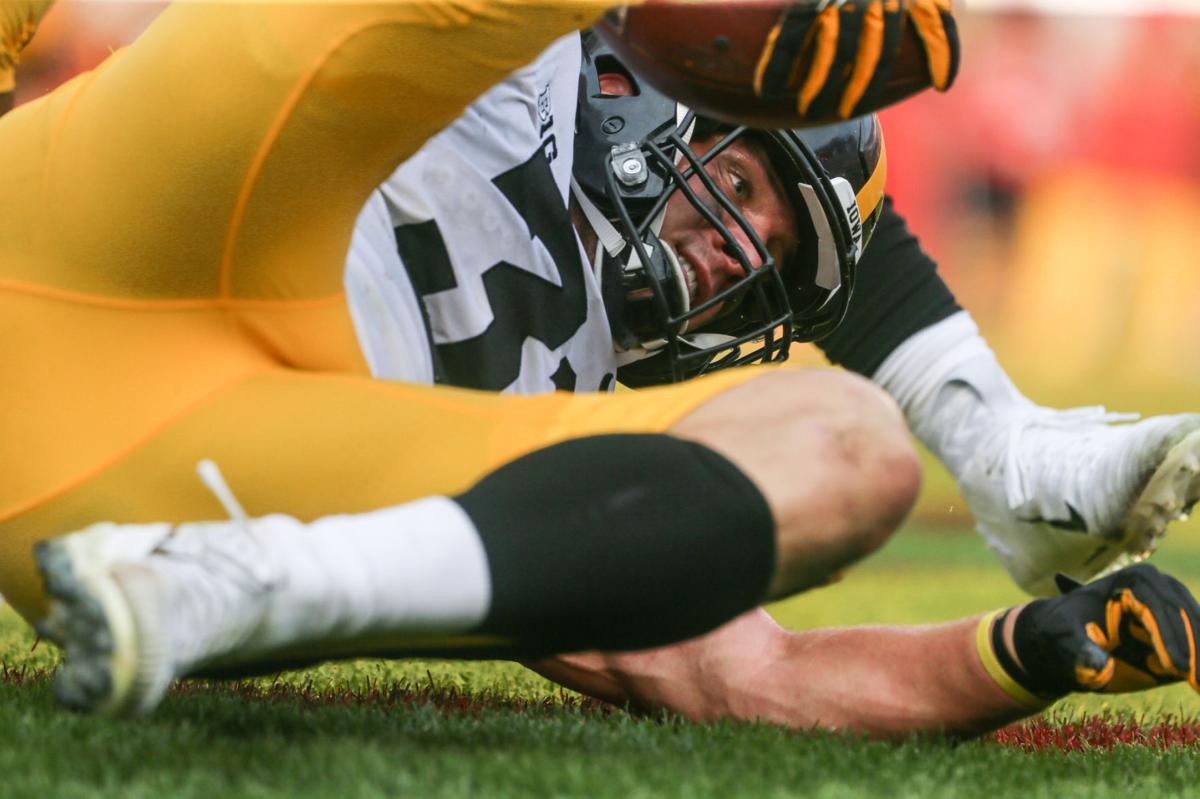 Iowa linebacker Jack Campbell dives into the end zone for a touchdown against Iowa State during the Cy-Hawk game at Jack Trice Stadium Saturday in Ames. The fumble recovery was one of four turnovers forced by Iowa's defense. 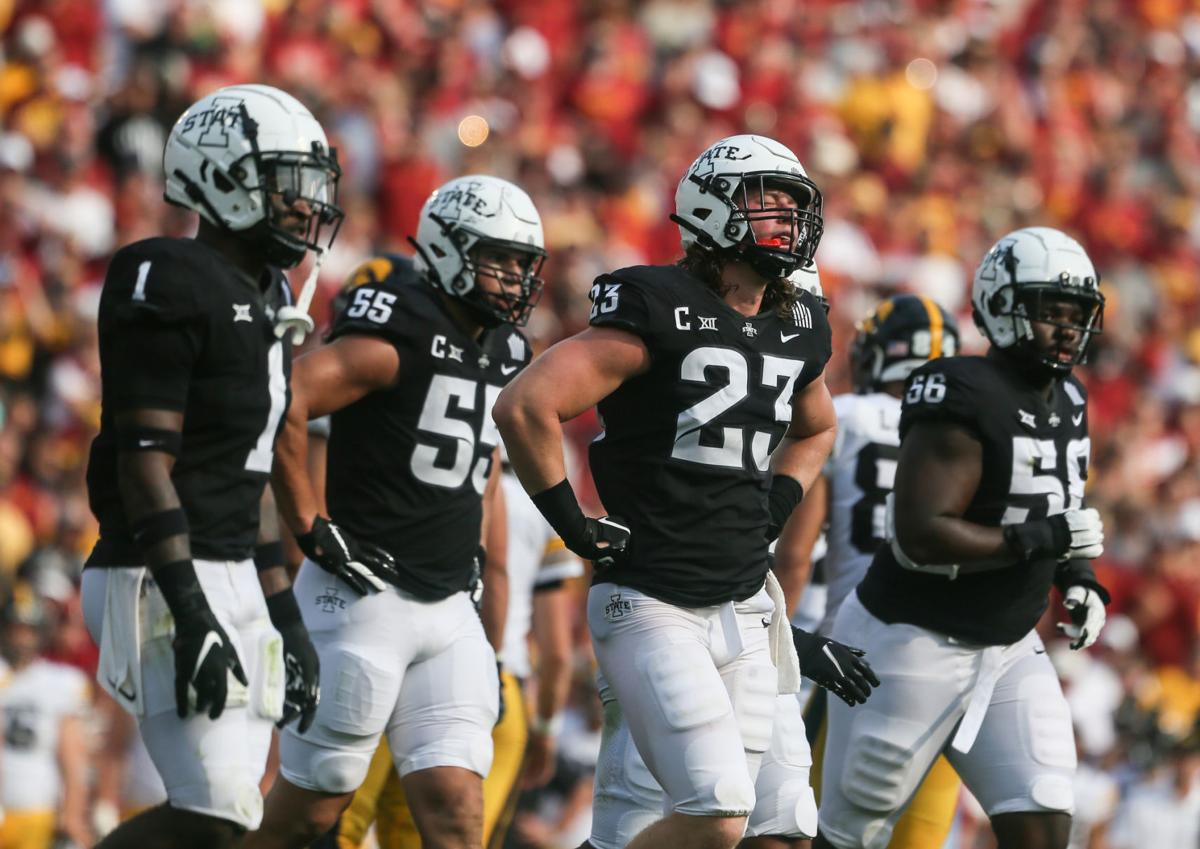 Iowa State Cyclones players react after a fumble during the Cy-Hawk game at Jack Trice Stadium on Saturday in Ames. 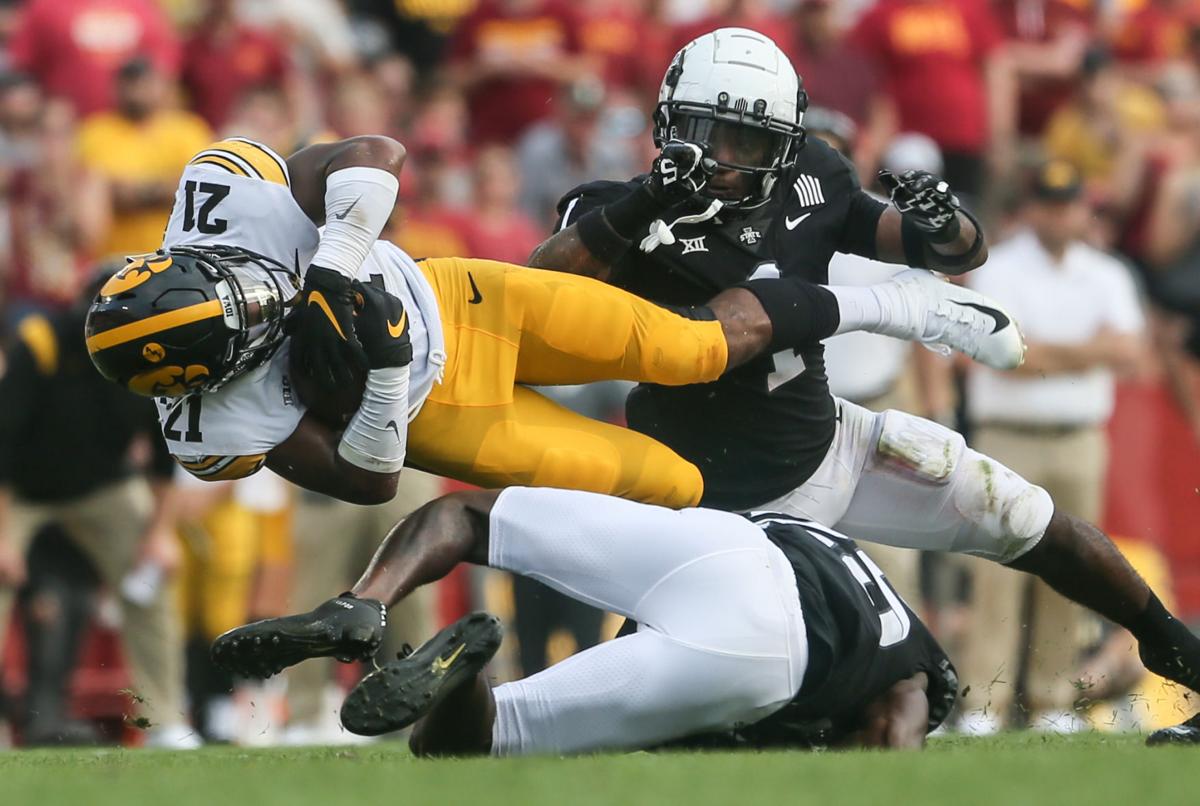 Iowa running back Ivory Kelly-Martin (21) is taken out by a pair of Iowa State defenders during the Hawkeyes' 27-17 win at Jack Trice Stadium earlier this month.

AMES — Two games into the season, Iowa’s "mutts" are playing like top dogs.

The Iowa defense did it again Saturday, riddling a ranked opponent for the second week in a row with multiple game-changing plays.

The Hawkeyes turned four turnovers by Iowa State into 20 points that sent 10th-ranked Iowa on its way to a 27-17 victory over the ninth-ranked Cyclones at Jack Trice Stadium.

"That’s what we do at Iowa. We may not run the fastest 40s or jump the highest. We’re mutts, but we get the job done," said linebacker Jack Campbell, who scored on a third quarter fumble recovery that broke open a 14-10 game.

"That’s the standard, what we expect from ourselves," said senior cornerback Matt Hankins, who picked off a pair of passes.

The victory was the sixth straight in the Cy-Hawk series for Iowa, and it followed a familiar format.

The Hawkeyes played turnover-free football against their in-state rival for the fifth straight game and made ISU pay for nearly every mistake it made in the first-ever match-up between the programs when both were ranked in the top 10 nationally.

Jack Campbell’s scoop and score came after Jestin Jacobs jarred the ball loose, allowing the junior linebacker from Cedar Falls to pick it up and return it five yards following the first of three costly ISU mistakes in the quarter.

"There’s no secret formula. We play defense the way we play it. You’re talking about two really good defenses out there," Iowa coach Kirk Ferentz said.

"Every yard was hard. It was a tough game against a tough team. Turnovers, to me, are usually the result of someone being where they are supposed to be."

Interceptions would position Caleb Shudak to extend the Hawkeyes’ 21-10 lead with a pair of field goals over a seven-minute stretch that followed Jack Campbell’s touchdown with 5 minutes, 8 seconds to go in the third.

"I was just in the right place at the right time," Jack Campbell said. "That was 10 other guys out there scrapping and clawing. I was just blessed to be in the right spot."

Quarterback Spencer Petras, who completed 11-of-21 passes for 106 of Iowa’s 174 yards of offense, called the Hawkeyes’ defensive work "a dream."

The dream played out repeatedly in the deciding third quarter.

"Those guys go so hard and they’re great at making things happen," Petras said. "Even when we come up short on a drive, we know they’ll have our backs."

Hankins ended ISU’s next possession with his second interception of the game, returning it 41 yards to the 22-yard line.

The Hawkeyes marched to the ISU 3-yard line during the opening minutes of the fourth quarter before settling for a 22-yard field goal by Shudak.

"To come here and get a win against a great team like this, it felt good to help us get a big win," said Shudak, the son of Jeff Shudak, a three-time All-Big Eight kicker for ISU.

Short fields created by mistakes started to plague the Cyclones (1-1) in the second quarter, facilitating the Hawkeyes’ second win of the young season, although a drive over the final 1:01 of the opening half pulled Iowa State within 14-10 at the break.

After Charlie Jones wrapped his arms around a 26-yard touchdown pass to give the Hawkeyes a 14-3 advantage, Purdy connected on four straight passes including a 49-yard strike to Darren Wilson with :12 to play in the second quarter.

Following a timeout, Breece Hall plowed his way through the middle of the Iowa defense to collect a rushing a touchdown for the 14th straight game, one shy of a Big 12 record.

"That can’t happen," Jack Campbell said. "We talked as a defense at the half and made the adjustments we needed to make."

The Hawkeyes accumulated just 14 yards of offense as the teams traded punts early and often in an opening quarter that ended with the Cyclones ahead 3-0 on the strength of a 23-yard field goal by Connor Assalley.

Shudak missed from 50 yards on the Hawkeyes’ only scoring opportunity in the first quarter following a high snap.

A Hankins interception set up the drive which moved Iowa in front.

Hankins’ pick at midfield preceded receptions by Jackson Ritter and Luke Lachey of nine and 17 yards that marched Iowa to the 20-yard line.

SIX IN A ROW

IOWA NOTEBOOK: An overturned call leaves the Hawkeyes' Tyrone Tracy Jr. about when a catch is a catch.

IOWA CITY — The comparisons began a few weeks ago.

The fifth quarter: Hawkeyes show growth, and room to grow

Vikings drop another heart-breaker to Millikin in OT

Augie's Tatum proud to be a `momma's boy'

Batterson's ballot: Movement in the middle

The St. Ambrose University football team was living on the edge all game on Saturday against hosting Lawrence Technical University.

Iowa players hoist the Cy-Hawk trophy after the Hawkeyes' 27-17 victory over Iowa State at Jack Trice Stadium on Saturday in Ames.

Iowa linebacker Jack Campbell dives into the end zone for a touchdown against Iowa State during the Cy-Hawk game at Jack Trice Stadium Saturday in Ames. The fumble recovery was one of four turnovers forced by Iowa's defense.

Iowa State Cyclones players react after a fumble during the Cy-Hawk game at Jack Trice Stadium on Saturday in Ames.

Iowa running back Ivory Kelly-Martin (21) is taken out by a pair of Iowa State defenders during the Hawkeyes' 27-17 win at Jack Trice Stadium earlier this month.