IOWA CITY — There was a time when Nico Ragaini could see himself taking the field in a Rutgers football uniform.

"I would have killed for a Rutgers offer coming out of high school, that’s for sure," the Iowa receiver said Tuesday. "I had no offers until my fifth year of high school. If Rutgers had looked at me, I definitely would have been looking right back at them."

Instead, the Scarlet Knights will be looking for ways to defend the most experienced receiver on the Hawkeye roster.

Back in action for Iowa after fracturing a bone in a foot during preseason camp, Ragaini will bring his collection of 92 career receptions to SHI Stadium for a 6:10 p.m. game Saturday when the Hawkeyes open Big Ten play at Rutgers.

Only two of those catches have come this season, both in last weekend’s 27-0 win over Nevada, and the 6-foot, 196-pound East Haven, Conn., native looks forward to expanded opportunities in upcoming games.

"It feels good to be back on the field helping the offense again," Ragaini said.

While a Rutgers offer from a previous coaching staff never came, Ragaini moved on to Avon Old Farms Prep School and things have worked out for the player Iowa signed.

"I’m grateful to be where I am," Ragaini said.

He’s also grateful for the teammates who have helped him fill ticket requests for the closest game he will play to his hometown as a Hawkeye.

As of Tuesday morning, Ragaini counted 79 family members and friends who will make the 117-mile trip from his hometown to the Rutgers campus in Piscataway, N.J., to watch their favorite Hawkeye compete.

"That’s as of now, but the number keeps growing," Ragaini said. "My teammates have been generous in helping me with tickets this week, I can’t say enough about that, and it’s going to be a lot of fun. A lot my high school friends live now in New York City or Boston and plan to be there."

"Having a bunch of people just having your back and everything is a great feeling," Ragaini said. "I don’t feel any pressure, though, because they all believe in me."

The only pressure Ragaini has felt recently was the pressure to get himself back on the field after suffering the foot injury during fall camp.

"When I was hurt, a bunch of people were texting me, saying I’d better come back for this game because they’d just bought tickets for the Rutgers game," Ragaini said.

He felt he could have played the previous week against Iowa State but took the advice of doctors and trainers to wait an additional week after having a screw inserted into his foot where he suffered his fracture.

"They felt the extra week would give me a better chance to play healthier for the rest of the season rather than rushing back, and that was the smart thing to do," Ragaini said.

Ragaini was Iowa’s most productive receiver against Nevada, covering 56 yards with his two receptions.

It’s been a process.

“Every day, I feel like I’m getting better and better. I’ve had to learn how to run again. That’s part of it, you have to get over that mental block of having a screw in your foot," Ragaini said.

He caught himself doing some uncharacteristic things in his season debut last week.

As an example, coaches mentioned and Ragaini saw on tape that he extended his arms to catch balls long before he typically would normally do so when he knew a pass was coming his way.

There were other things that will improve from week to week as Ragaini continues to return to form.

The routes will become more accurate, the cuts will be crisper.

"I’ll get there. It’s just being more confident in myself and continuing to grow each day," Ragaini said.

Ragaini’s return, along with the return of Keagan Johnson and Brody Brecht, did increase the number of options available in the Iowa passing game.

"The biggest thing last week was having some other bodies out on the field helping, just supplementing what we already had," Iowa coach Kirk Ferentz said.

"If we can keep going in that direction, that trend, it’s going to help guys like Arland Bruce who has been shouldering a big load and Sam LaPorta. Those guys will be better players when we get a little bit more support around them, a little bit more experience. It certain helps Spencer (Petras, the Iowa quarterback,) too."

Ragaini said he tried to remain active helping teammates the best he could while he was sidelined but welcomed the chance to return to competition.

"My goal is to play as good as I could possibly play this year to give me a shot to play at the next level," Ragaini said. "That’s the mindset, just giving everything I have."

"He’s a senior and the leader in that receiving room and the most veteran guy in terms of play counts on our offense," Petras said.

"He’s a real confident player, a pretty laid-back guy but when he talks when he’s in the huddle, if he’s trying to motivate guys or whatever it may be, people listen because he’s so respected."

Working back: Coach Kirk Ferentz said there is a chance that linebacker Jestin Jacobs and cornerback Brendan Deasfernandes could return to action this week after dealing with injuries.

“I think they have a shot to be back, but we’ll see," Ferentz said. “Deasfernandes, he practiced (Tuesday) and we’re hoping Jestin does (Wednesday). Again, it’s soft tissue so it’s hard to predict."

In and out: In his first action of the season last weekend, wide receiver Keagan Johnson caught a pair of passes for 11 yards before taking himself out of the game after around the 35th of the 61 offensive plays Iowa ran against Nevada.

Ferentz said he doesn’t believe Johnson will be available for the Rutgers game, saying he had not practiced yet this week.

Back at practice: Running back Leshon Williams has returned to practice this week after missing last Saturday’s game following the death of his father.

IOWA CITY — Luke Lachey believes little things are making a difference as he sees his role increasing on the Iowa offense.

College football: SAU's Oshin all business -- on, off field

The Hawkeyes mustered less than 100 yards for almost three quarters Saturday in a 27-14 setback to Michigan.

IOWA CITY — Michigan found Saturday to be the perfect day for a drive.

A look at the storylines and statistics surrounding Iowa's Saturday game against Michigan.

Batterson's ballot: Plenty of change is no October surprise

There is no shortage of change on my ballot for this week's Associated Press college football poll.

Four things the football teams from Michigan and Iowa can do to position themselves for success in Saturday's 11:05 a.m. game at Kinnick Stadium: 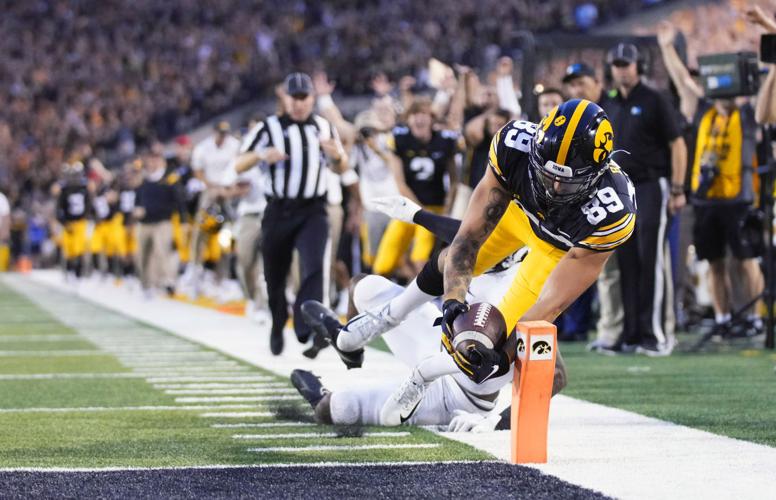 Iowa wide receiver Nico Ragaini dives to score a touchdown in front of Penn State safety Ji'Ayir Brown during the second half of the Hawkeyes' win over the Nittany Lions last season at Kinnick Stadium. 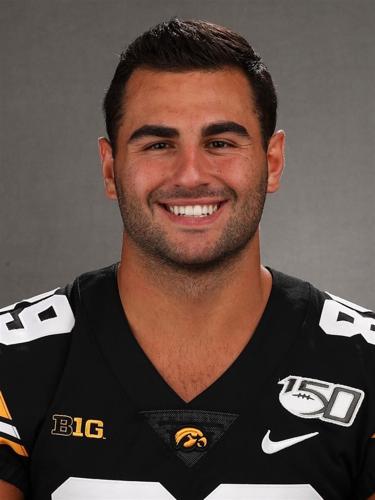