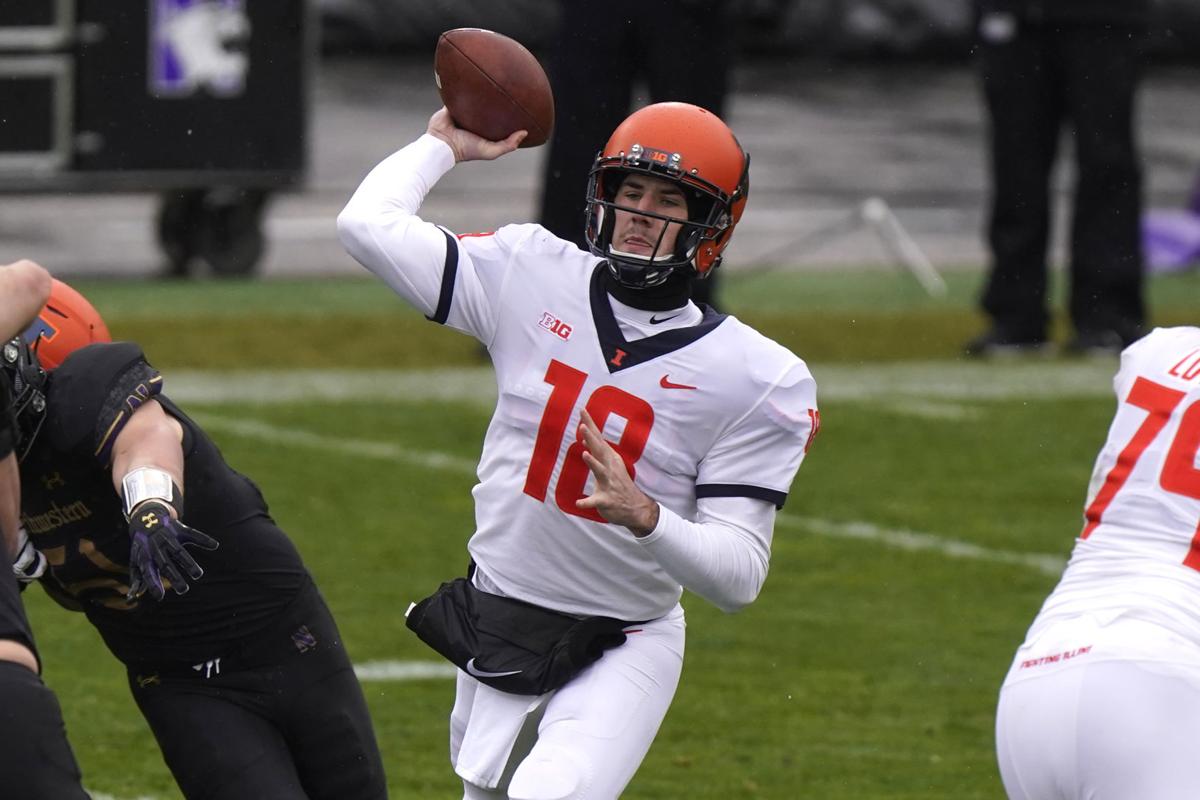 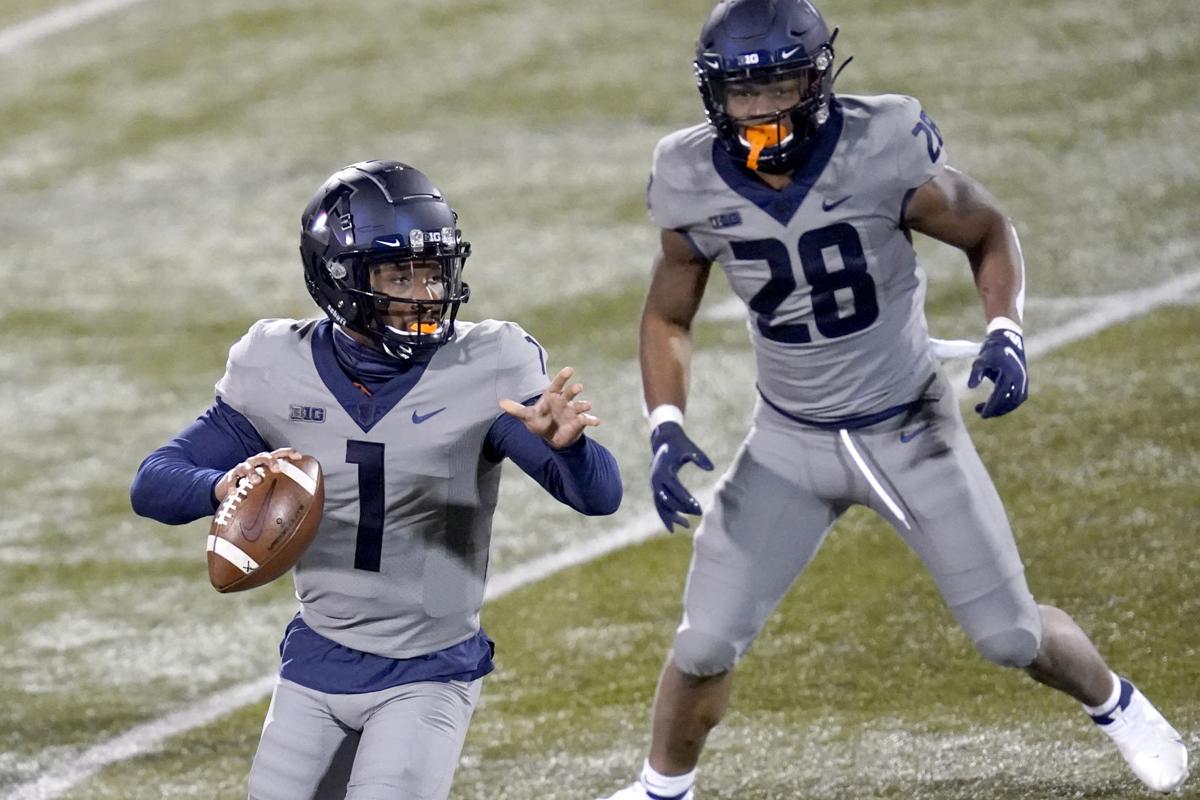 Illinois quarterback Isaiah Williams (1), looking to pass as running back Reggie Love III watches during a game this past season, is in competition with Brandon Peters for the starting quarterback spot this spring.

CHAMPAIGN — When the University of Illinois football team gets a national audience for its spring game at 7 p.m. Monday on the Big Ten Network, head coach Bret Bielema must balance the two goals he has for the game.

From the moment Bielema took over for Lovie Smith in December, he has been eager to put Illinois on a big stage and that first opportunity has arrived.

"This was one of the things that I went with right when I got here. I think for us with a new program, new staff and basically a new regime, I wanted us to have our own unique niche and time slot," Bielema said. "We are going to be able to tell recruits from the west coast to the east coast and everywhere in between that we are going to be on live.

"On the other side, we only have 15 of these spring practices, so I have to balance to put on a show that we can show the nation but, on top of that, we are trying to get a great work day for our players. We will balance those things out and have a good success."

The format of the scrimmage will resemble a typical game with some fundamental changes. The game will be split into four 15-minute quarters, with the orange players representing the best the Fighting Illini have to offer. As Bielema describes it, the game will be "the No. 1s against the world," with modified scoring.

Some fans will be able to attend the game at Memorial Stadium. Last season, when Bielema was outside linebackers coach for the New York Giants, adding fans to some games made a world of difference.

"The thing that jumped out to me was when we would go to some of the stadiums that had limited seating," Bielema said. "Even though it wasn't a big number — it might have been 10,000 — it seemed like you were playing in front of 100,000. I'm excited for our kids for Monday night and it will be fun to have crowds.

"I went over this with the guys the other night. The first time we played this sport, it wasn't because there were 100,000 fans or that it was on a major TV network. It was because you loved the game and that is what we have been able to do this spring."

The game will be the first opportunity for fans to see who Bielema sees leading the program between quarterbacks Brandon Peters and Isaiah Williams. Each have been getting No. 1 team reps this spring and Peters has seen improvement for himself and his competitor.

"Isaiah and I are taking the reps as we get them and they have been pretty even between me and Isaiah. Reps are limited so you have to make the best of them," Peters said. "Personally for me, I have done what I could with my reps and Isaiah has improved as well. We are both getting really good and we are getting really good coaching. The sky is the limit."

Williams, who started four games last season, has a close relationship with the entire quarterbacks room, which includes six players on the roster.

"They are my guys. One thing we do well is helping each other and giving each other keys," Williams said. "I was talking to Brandon about mechanics and he had some good insights for me. It is the little things and we help each other. If I can make him better, I can also become better from him.

"I gained experience last season and it is different when you are out there playing in a game. The game slowed down as time went on and I learned with how to work with my guys better."

Overall, the Illini are a very experienced team with 17 super-seniors returning, the most in the Power 5. The squad also returns 86% of its defensive starts from a year ago and 81% of its offensive starts.

With the NCAA's approval of a one-time transfer for players in most college sports, keeping a team together over four years may turn into a challenge.

"Most coaches had planned for this. It had happened with other sports so if it happens in one sport it will happen in all sports. It is something we have been planning for the players we have recruited and anything that benefits the student athlete is a step in the right direction," Bielema said.

Player transfers from one conference team to another is an area that needs further investigation, Bielema said.

"My only concern is that literally a player could get done with his last practice, have an exit meeting with his coach and talk about coming back in the fall. Then they have a one-time transfer and you could be facing them in your opening game of the 2021 season," Bielema said. "I think inter-conference transfers are very concerning for the health of our game but that is probably secondary to the overall health and well-being of our student athletes.

"As we move forward, there are some definite trigger points that we have to work through as coaches."

What: Orange vs. Blue Spring Game

Note: All of the team's starters will play on the Orange side, so points will be doubled whenever the Blue side scores.

Illinois quarterback Isaiah Williams (1), looking to pass as running back Reggie Love III watches during a game this past season, is in competition with Brandon Peters for the starting quarterback spot this spring.