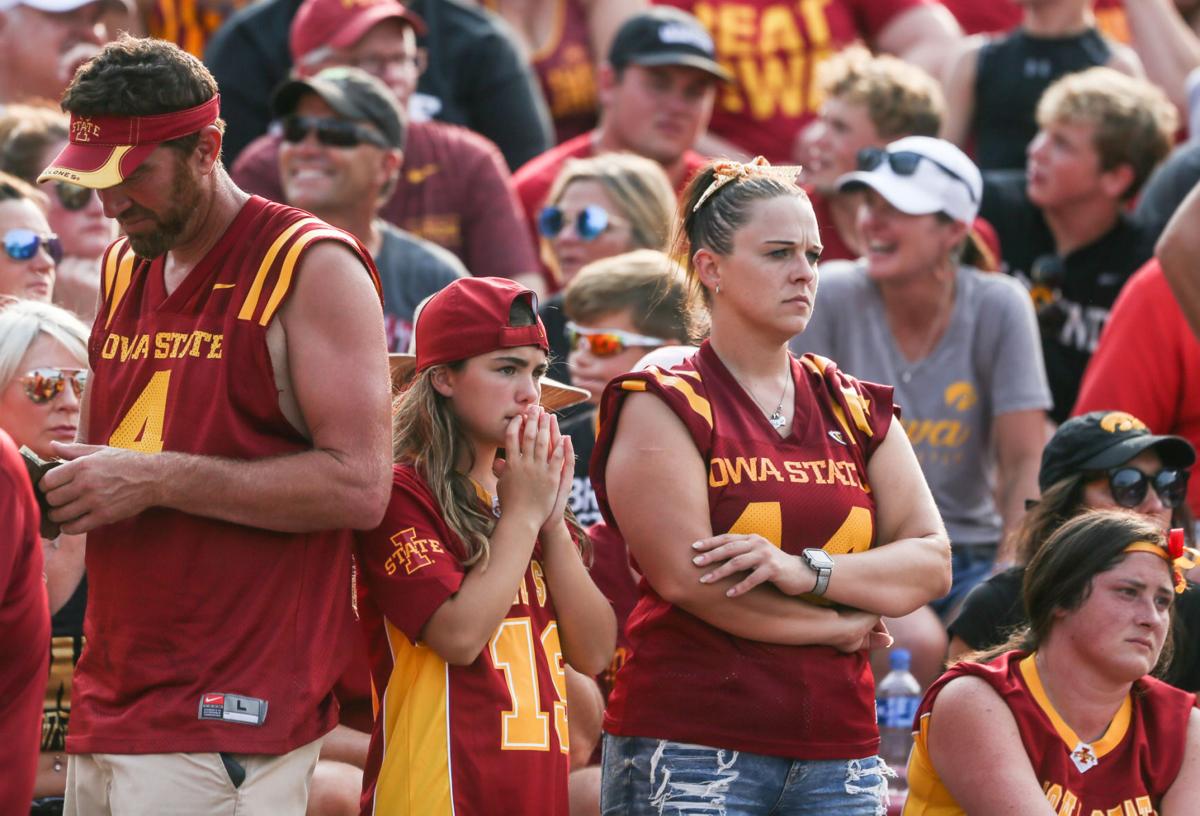 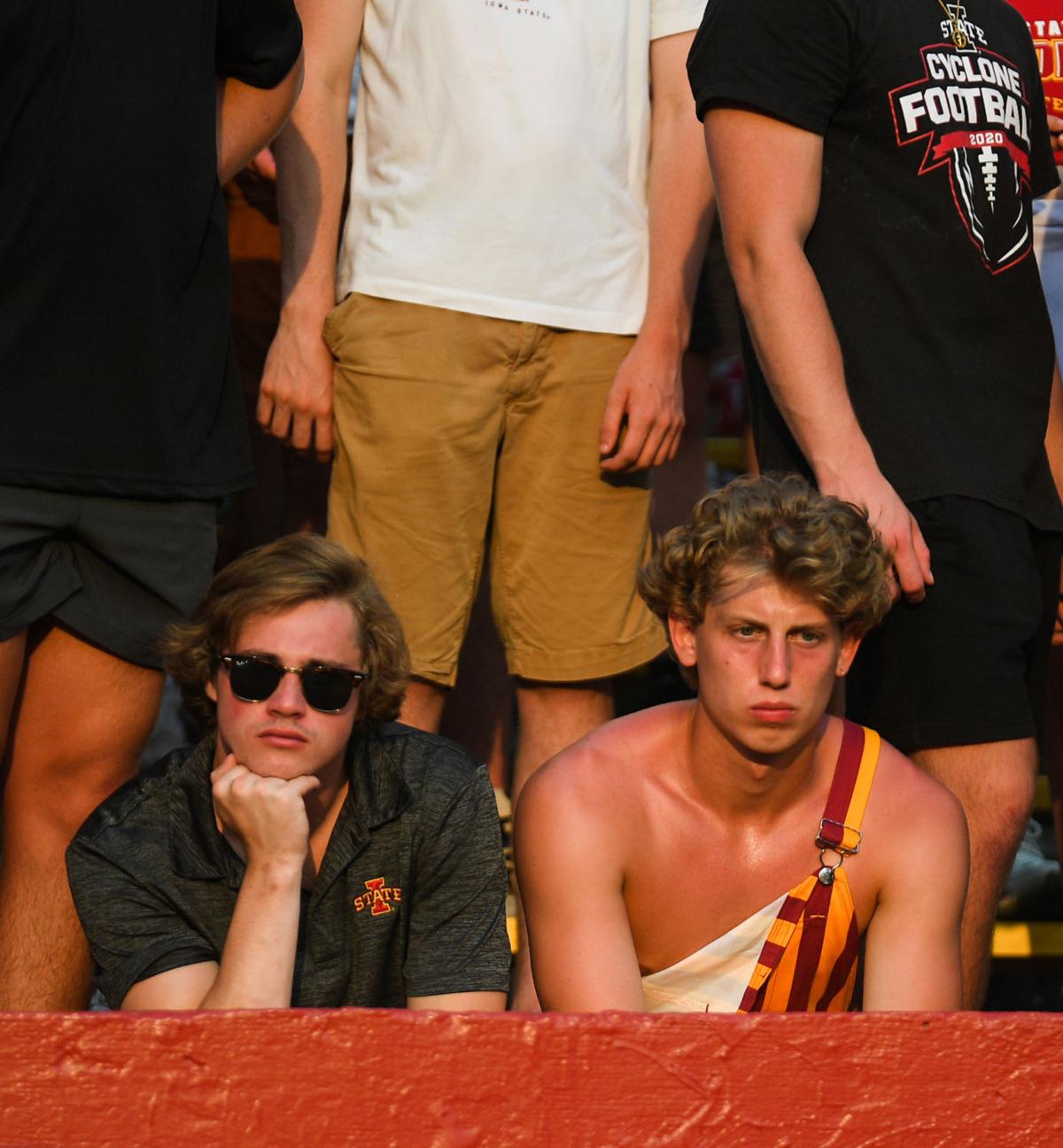 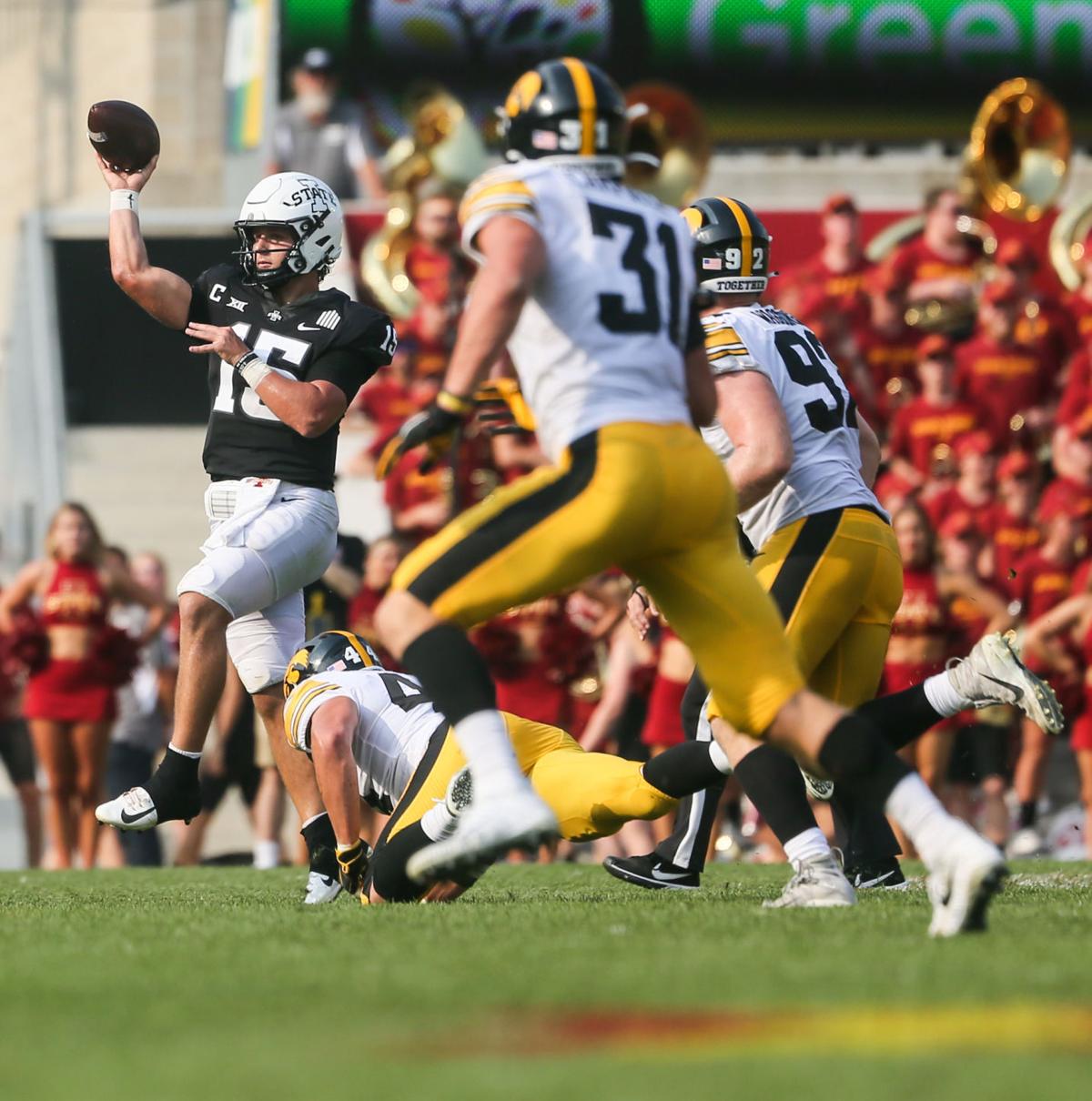 AMES — Matt Campbell has accomplished an awful lot in his first five-plus years as the football coach at Iowa State.

He landed the Cyclones in a major bowl game for the first time ever last season and won it. A program that was once a Big 12 shrug has become a power. He has beaten Oklahoma twice. Same with Texas.

The big in-state rival from 130 miles down the interstate, the one that wears black uniforms all the time?

Campbell continued to be 0-for-Iowa Saturday as his ninth-ranked Cyclones played an uncharacteristically erratic game and went down to a 27-17 loss to the No. 10 Hawkeyes in a contest that actually wasn’t as closely contested as that score implies.

Iowa State scored a consolation touchdown on a drive engineered by its backup quarterback with 3 minutes, 27 seconds remaining to make the score a little more palatable.

Before that, though, the Cyclones floundered, committing four turnovers and squandering opportunities. Other than some decent defense and an electric drive at the end of the first half, they didn’t show much of anything.

This was Iowa State’s big chance. It had a top-10 ranking and a chance to really make a big statement on national TV by beating its despised in-state rival for the first time since 2015, before any of the current coaches or players were in Ames.

Someone did some deep, deep research and found that in 140 games against ranked teams over the past 40 years, this was the first time Iowa State actually was favored against a ranked team.

When it all evaporated in the mid-September heat, it had to be a bitter pill for Cyclone backers to swallow.

"I get it …," Campbell said. "That’s not our kids’ issue. It’s a Matt Campbell issue. … I can understand (the fans’) disappointment. I think we and the players feel that same disappointment."

Senior defensive lineman Enyi Uwazurike, one of only three ISU players made available to the media following the game, sprung that old "It’s just one loss" line on reporters, but admitted it was hard to lose to the Hawkeyes again.

"We always seem to beat ourselves when we get to this moment," he said. "But just us in the locker room, we couldn't care less about how people feel."

In truth, none of the Iowa State players or even Campbell seemed totally crushed by the defeat. None of them — to borrow an old Hayden Fry idiom — looked as though someone had shot their dog.

They held their heads up and answered all the questions thoughtfully even though you got the feeling they may have been biting their tongues just a bit.

"Obviously, I’d like to beat Iowa while I’m here," said Jake Hummel, a senior linebacker from Des Moines. "But in the end, it’s a team sport and we didn’t get it done today. That’s all I’m going to say about that."

Still, you have to think it hurts that Hummel and Uwazurike and perhaps a couple dozen other Cyclones won’t ever get another shot at the Hawkeyes.

That includes senior quarterback Brock Purdy, who threw three very costly interceptions and was pulled from the game early in the fourth quarter.

Purdy, who was not made available for interviews, is going to ride off into the sunset with a bunch of school records and the label of arguably the best QB in ISU history but without a win over Iowa.

Don’t tell me that’s not going to sting when he thinks about it in his easy chair 30 years from now.

Campbell, when asked about Purdy’s ineffectiveness, fell back on that old coaches’ dodge that he needs to look at the films.

"I think the lack of execution falls on my shoulders …," he said. "It’s not a football team issue, it’s not a seniors issue, it’s a Matt Campbell issue."

He confessed he could tell something was "a hair off" in the first half, even before the wholesale collapse that was the third quarter.

He said he didn’t really know why that was and he said he needs to get that figured out in road games at UNLV and Baylor the next two weeks. He said those games likely will define the Cyclones’ season.

"When we’ve played great football during our time here, we’ve had great calm, great clarity and most of all great execution," he said. "We didn’t have that today."

IOWA NOTEBOOK: An overturned call leaves the Hawkeyes' Tyrone Tracy Jr. about when a catch is a catch.

IOWA CITY — The comparisons began a few weeks ago.

The fifth quarter: Hawkeyes show growth, and room to grow

Vikings drop another heart-breaker to Millikin in OT

Augie's Tatum proud to be a `momma's boy'

Batterson's ballot: Movement in the middle

The St. Ambrose University football team was living on the edge all game on Saturday against hosting Lawrence Technical University.