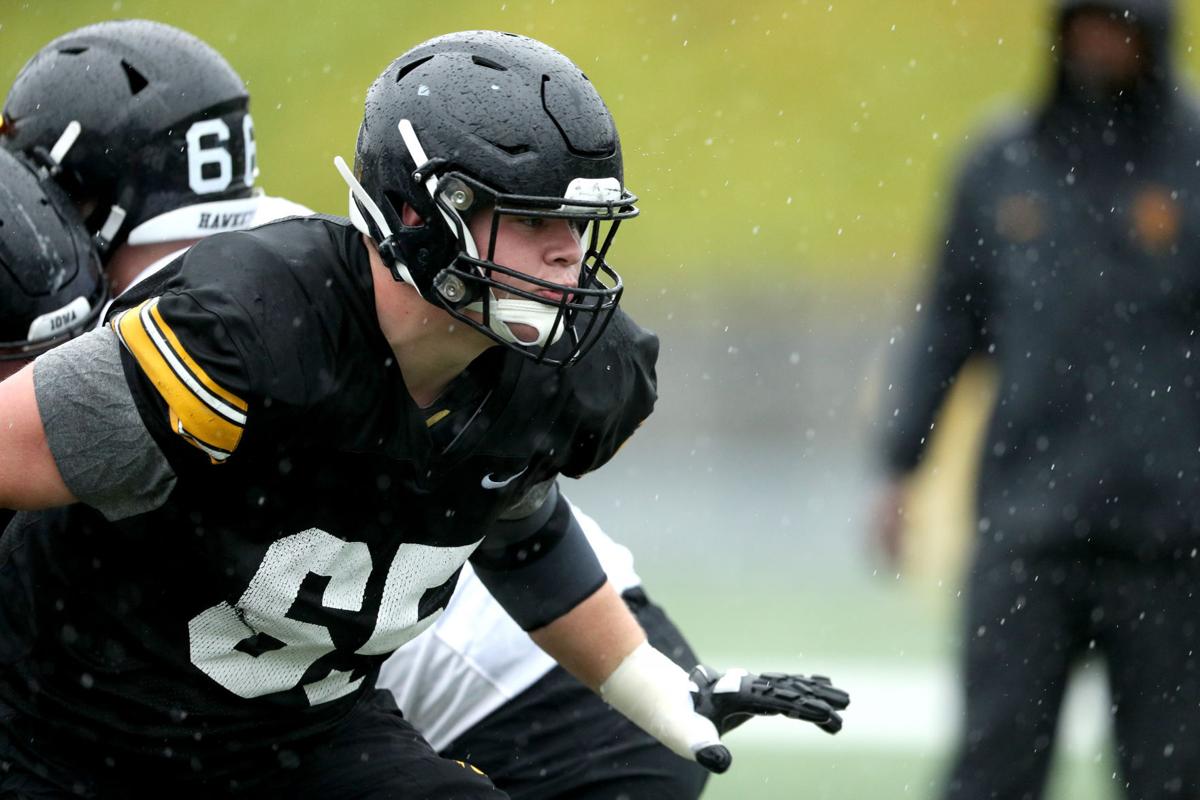 Iowa center Tyler Linderbaum works out during a practice prior to the Hawkeyes' Holiday Bowl game against USC. 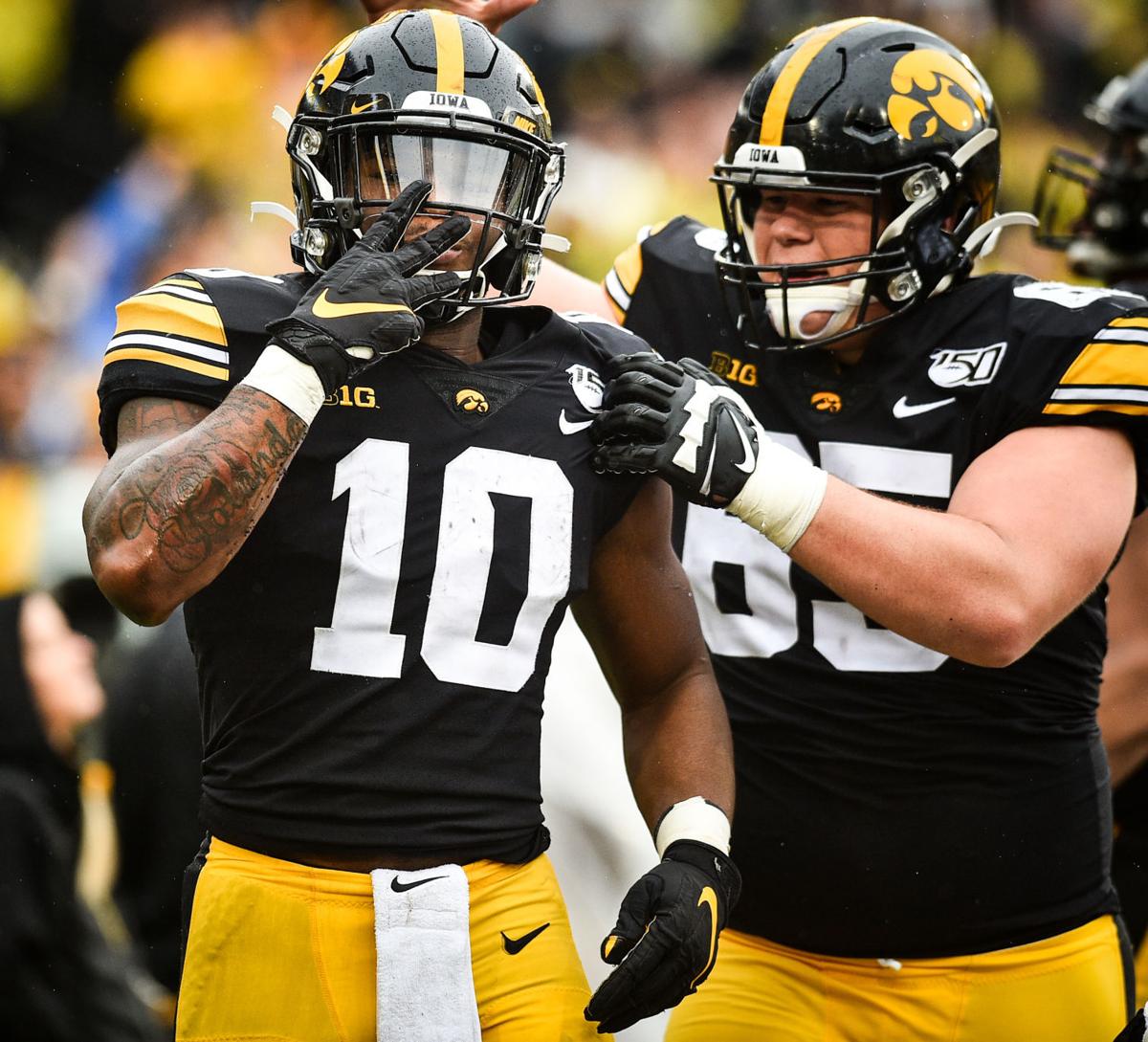 Linderbaum has only played center for the Iowa football team for a season-and-a-half, but the converted defensive tackle does a lot more than just snap the ball for the Hawkeyes.

The consistency in his work and the tenacity in his approach to the game have the 6-foot-3, 289-pound sophomore already catching the attention of NFL scouts.

He’s already surfaced on lists as a potential first- or second-round draft selection whenever he chooses to leave his college career behind him, positioning himself along with tackle Alaric Jackson as the next top-level offensive linemen to come out of a program known for developing NFL-caliber talent.

Teammates see both sides of Linderbaum every day in practice.

“He’s a tough guy to go against, a good dude though,’’ Iowa linebacker Seth Benson said. “Once he snaps the ball, he’s a pitbull in there, though. Even in practice, he’ll get after it.’’

Benson sees that as one of the benefits of playing for the Hawkeyes.

“When you get a chance to go up against guys like that on a regular basis in practice, it’s only going to give you a chance to get better every day, going up against one of the best like that,’’ Benson said.

Even going back to the preseason, Linderbaum said his focus has remained centered on doing what he can to help Iowa compete as a team.

“I learned a lot in my first season, but even with a year under my belt on the offensive line, I feel like I still have a lot to learn,’’ he said. “When I look at tape, I see things I can do better and need to do better to help the team.’’

“We have a good group of guys up front who understand what it takes to work together, understand the tempo that you have to play with and how you have to practice if you want to get things done on game day,’’ Linderbaum said. “We’ve had a lot of guys step up and I’m anxious to see where it all can lead when we work together as one.’’

Iowa has taken steps in that direction in the past two weeks, turning an 0-2 start to the season into the 2-2 record it will take into the match-up with the Nittany Lions.

The Hawkeyes’ ground game has gained traction in the past two weeks, following a 77-yard rushing effort against Northwestern by collecting 226 and 235 rushing yards in wins over Michigan State and Minnesota.

“I think we have a lot of guys putting vertical pressure on the D-linemen, getting after it,’’ Linderbaum said. “We’ve got a good takeoff going and are getting a good push on the line. And, we’ve got great backs who can read and hit the seams.’’

And, things are working out the way coach Kirk Ferentz hoped they would when Linderbaum switched from defense to taking a few snaps as Iowa worked through bowl practices at the end of the 2018 season.

Working with Keagan Render on the practice field prior to the Hawkeyes’ Outback Bowl win over Mississippi State, Linderbaum proved to be a quick learner.

That didn’t necessarily surprise Ferentz, recalling the success Linderbaum had not only in football but in wrestling and baseball during his prep career at Solon High School.

“Coming in, we were all in agreement that this guy is a really good football player on both sides of the ball, a guy with a great love for the game, a great love for his teammates and a great leader,’’ Ferentz said.

“It was kind of a natural. If we had three of them, we’d have him playing center and the other two guys would be playing guards. He’s one of those football players who can do a lot of things and he’s a delight to have on the team.’’

Sophomore Cody Ince, who stepped into a starting guard spot two weeks ago when Kyler Schott was sidelined, sees that as well.

“It definitely helps having somebody like that next to you,’’ Ince said. “It pushes you to be better and play at the level he’s at.’’

Ince said the intensity Linderbaum brings to the field rubs off on teammates.

“You want to match that,’’ Ince said. “That’s leadership and he shows it on and off the field. We have a lot of younger guys in (the offensive line) room and he’s there to show you and help you do things the right way.’’

Defensive tackle Daviyon Nixon has gotten a taste of what that right way is all about on the practice field.

“Tyler is a quality guy, but a real scrappy player,’’ Nixon said. “He’s fast off the ball, always where he needs to be. He’s a good guy to go against in practice because he’s going to make you better. You don’t have a choice there. He’s making everybody on this team around him better.’’

CHAMPAIGN — The Illinois football team will not play No. 4 Ohio State on Saturday.

No shortage of motivation for Hawkeyes, Huskers

Motivation won’t be an issue Friday when the football teams from Iowa and Nebraska renew acquaintances at Kinnick Stadium.

UNIVERSITY PARK, Pa. — Zach VanValkenburg doesn’t have a complicated explanation for it.

After-thoughts from Iowa’s 26-20 victory over Nebraska:

Iowa athletics reported four positive results from among 579 COVID-19 PCR tests administered during the past week.

IOWA CITY — Keith Duncan didn’t get the chance to seal this year’s Iowa football win over Nebraska with a kiss.

IOWA CITY — Three minutes into the third quarter Friday afternoon at Kinnick Stadium, Iowa’s football team was struggling with a bit of an ide…

Five things to think about following the Iowa football team's 41-21 victory at Penn State on Saturday:

Iowa center Tyler Linderbaum works out during a practice prior to the Hawkeyes' Holiday Bowl game against USC.