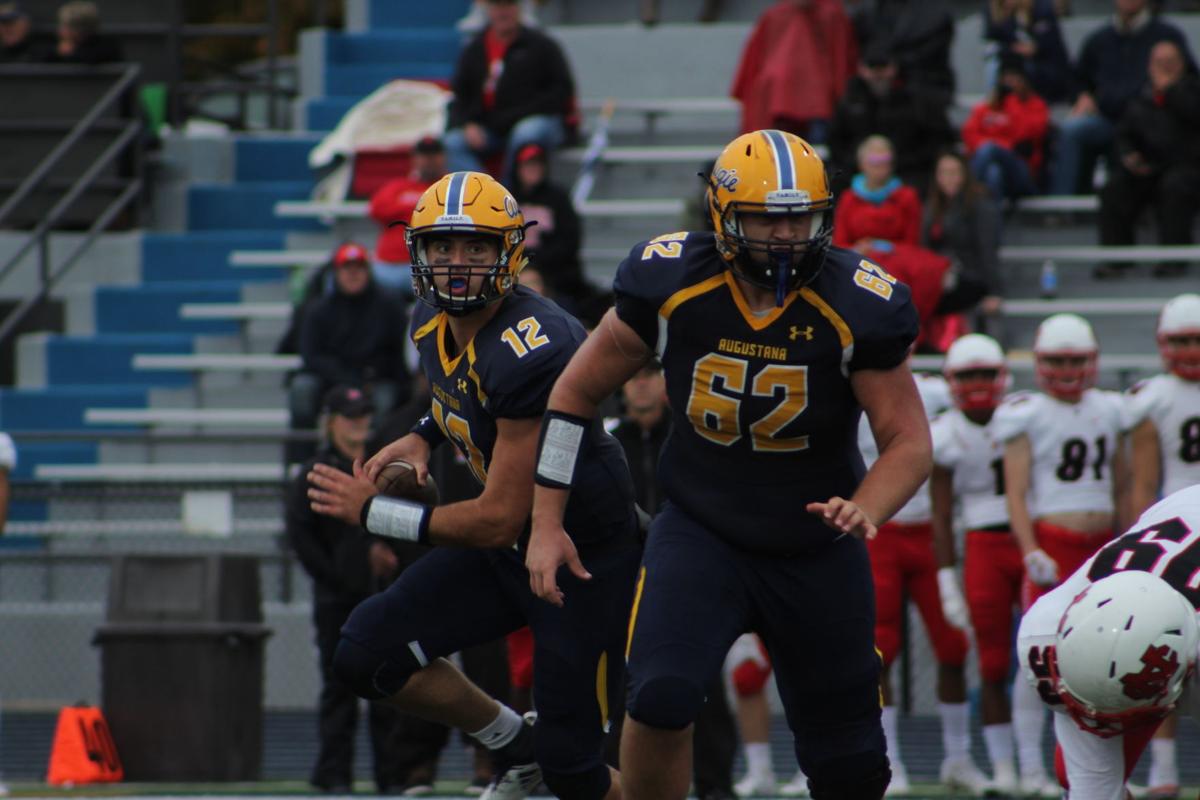 Augustana College offensive lineman Hunter Menke (62), a Davenport Central graduate, has carved out a solid career with the Vikings. 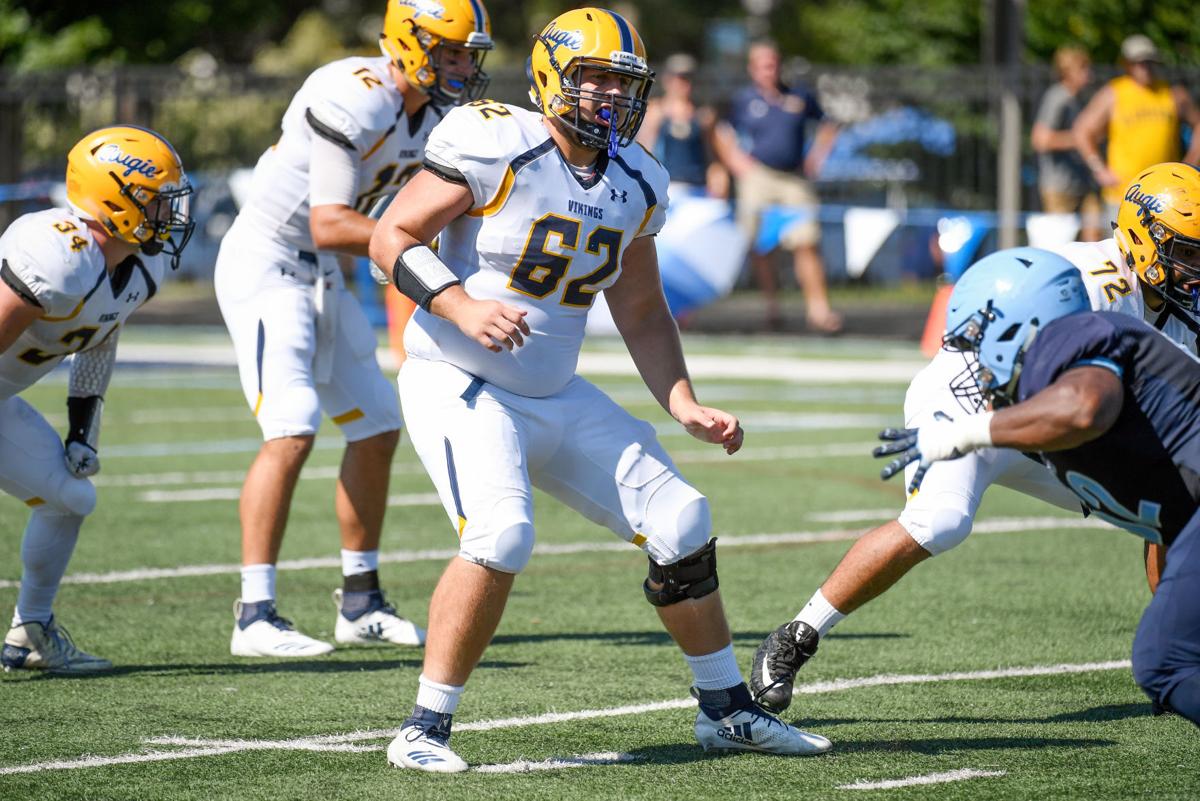 Augustana College offensive lineman Hunter Menke (62) has carved out a solid career with the Vikings despite multiple injuries. 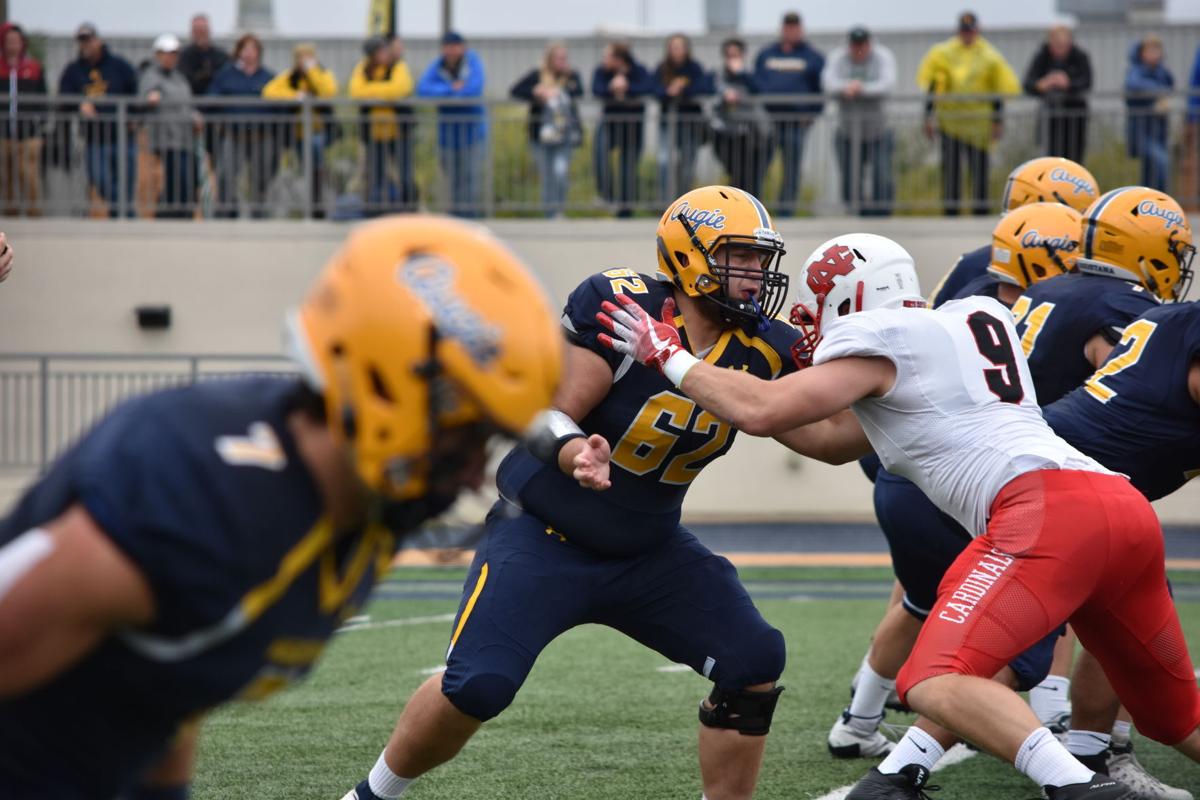 The former all-district lineman at Davenport Central High School stepped into the Augustana College football program with plenty of trepidation.

“Originally, I didn't even know if I wanted to play,” admitted Menke. “My dad (Mike) said give it one year and if you don't like it, you can be done. Just try it and see if you like it. It's by far been the best decision I have ever made.”

No one would have questioned had Menke been turned off to the sport during his freshman year. He came into a program with five guys a year ahead of him making their marks on the line and cementing starting spots for much of their careers.

“I remember the first night, I wanted to quit,” he said. “My helmet was too big and I was out there and didn't know what was going on and hated it. It wasn't fun to start with.”

Injuries, though, left the coaching staff turning to an untested and undersized rookie to fill in at right tackle. That was almost more of a bad thing than a positive that kept him engaged.

As head coach Steve Bell said of Menke's early introduction to collegiate football “he got thrown to the dogs.”

“He always seemed to be playing against the best teams and best players in the conference,” Bell said. “He got to play a lot of football, but it wasn't always a great experience.”

Despite the odds against him, Menke kept plugging along and never gave up, even facing numerous challenges, including two operations on his left knee and one to repair a torn labrum in his right shoulder.

“It just made me want to get better,” said Menke of battling the odds. “I saw that I could stick with guys as a freshman and I knew that I could do it if I put in the work to get to that level.”

For the next two years, Menke remained a valuable part of an experienced line despite not getting top reps in practice and not getting much action unless an injury opened the door.

“That growth has really helped him going into the short season,” Bell said.

“It was just having the mindset that I have to get better even though I haven't gotten the reps,” he said. “Coming out to practice every day, you have to get better. You just have to prove to yourself that you can do it because you haven't had the game experience.”

That fortitude gave Menke a lesson he feels will follow him into the work world. Graduating next month with majors in finance and economics, he is ready to hang up the uniform and trade it in for a suit as he looks for a spot in the banking business.

“That will help immensely,” said Menke of learning to approach all obstacles with a professional outlook. “It teaches you how to deal with adversity and to stay on your toes at all times. It keeps you ready at all times; you don't know what's going to be thrown at you, but you have to be ready for it.”

And he was. For that, Bell was appreciative.

While he may not have been been ready for what he faced as a freshman, Menke admitted he was ready for his senior season and a full-time starting spot in this spring's short season forced by the COVID-19 pandemic. He said he cherished the experience he had these last four years.

“I met my best friends; I'm going to hang out with these guys the rest of my life,” Menke said. “We do everything together. It's been awesome.”

Notes: The game will be streamed on the NPU athletic website. … NPU opened with a 30-21 exhibition win over Elmhurst that preceded losses at Carthage (21-0) and Illinois Wesleyan (42-7). … Augie had an off week after suffering a 40-34 four-overtime loss to Millikin. Even that wasn't enough to help the Vikings get healthy. Coach Steve Bell said the defensive line is “decimated” by injuries and defensive coordinator Dick Maloney has been playing a shell game filling spots up front. Not helping matters are a couple of players out because of COVID-19 issues. … Even being 0-2, Bell said Augie's approach is to get a win and not just give kids opportunities. “We owe that to our seniors to go out with a win,” he said. … Augie's offense has been stagnant and Bell is hoping for some “explosive” plays that can spur a drive. Augie had just four plays of 10 or more yards in a 12-0 loss to Illinois Wesleyan and eight plays of 10+ yards in regulation in the loss to Millikin. In the overtimes vs. MU, Augie had three plays of double-digit yards. … Augie senior DB John Kappel will be available for this entire game. He was flagged for a targeting penalty and ejected from Augie's last game, which would have made him ineligible for Friday's first half. However, Coach Bell said that the hit was reviewed by the league office and deemed to be a legal hit, allowing Kappel to play in what could be his final Augie game.

Augustana College offensive lineman Hunter Menke (62), a Davenport Central graduate, has carved out a solid career with the Vikings.

Augustana College offensive lineman Hunter Menke (62) has carved out a solid career with the Vikings despite multiple injuries.