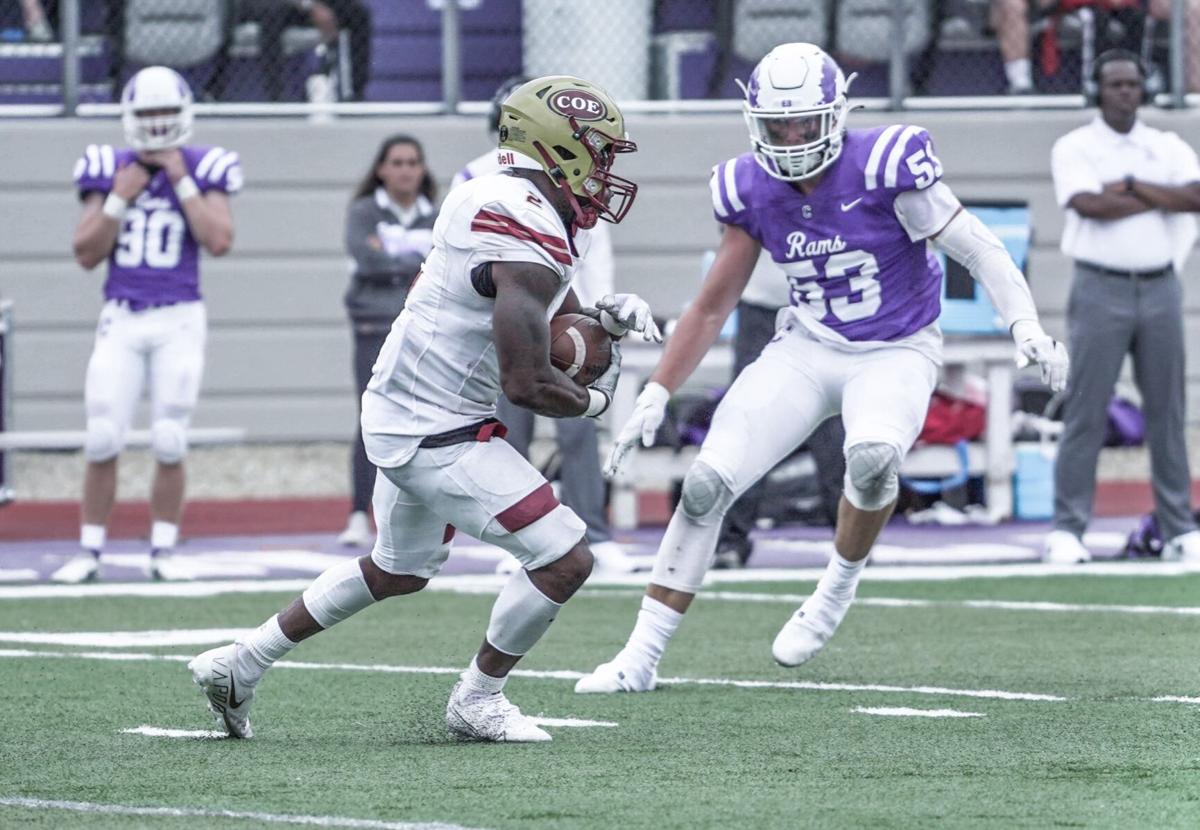 Former Muscatine High School star Alphonso Soko carries the ball for Coe College against Cornell in the season opener. Soko rushed for 71 yards and two touchdowns in his Coe debut. 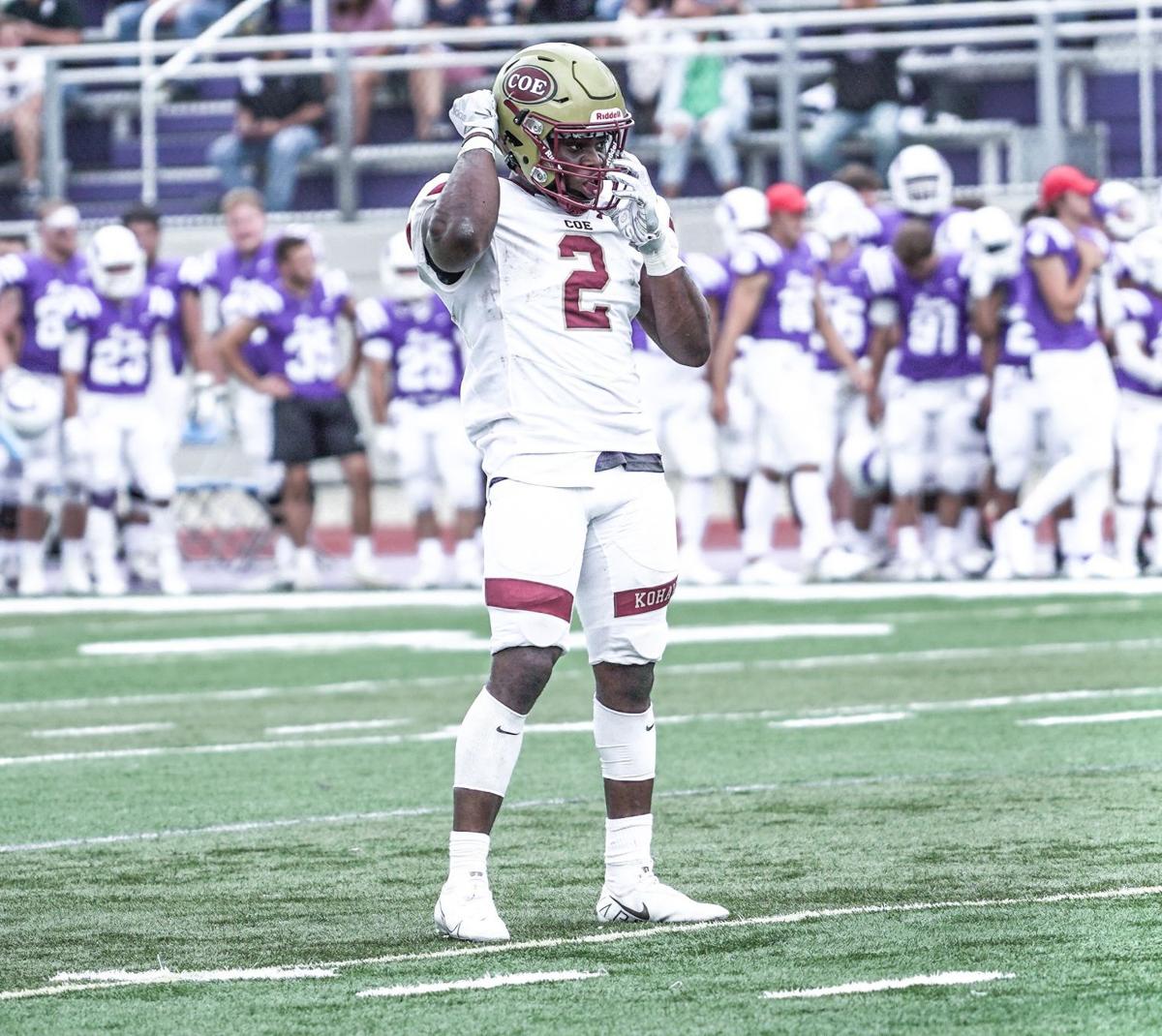 Alphonso Soko, a two-time all-state selection at Muscatine High School, is now the starting running back at Coe College after spending three years at Northern Iowa.

As a child in Liberia, Alphonso Soko didn’t even know what American football was.

But after coming to the United States with his family in 2008 and settling in Muscatine, he discovered the sport and grew to love it so much that he forged his mother’s name on permission slips in order to begin playing.

About two years ago, doctors told him he likely wouldn’t ever play the sport again.

Soko didn’t listen. And this fall he has revived his football career in a big way at Coe College in Cedar Rapids.

Soko, who suffered a ruptured Achilles tendon while playing for Northern Iowa two years ago, scored two touchdowns in Coe’s season-opening victory over arch-rival Cornell, then rambled for 284 yards in 33 carries Saturday in a 28-21 conquest of Hope College.

“It feels good …’’ Soko said. “I know what I can do and it’s great just to have an opportunity to prove it.’’

Soko’s elusive running style was on full display at Muscatine five years ago. He played in 16 varsity games during the 2015 and 2016 seasons and earned all-state honors both years, finishing with 2,460 yards of total offense and scoring 35 touchdowns.

More than that, football provided him a pathway to acceptance after his arrival from Liberia. It was a vehicle for developing responsibility and discipline as he adjusted to a new culture and a new language.

Although he was a bit undersized at 5-foot-9 and 180 pounds, his success with the Muskies attracted plenty of interest from college scouts.

He initially committed to the University of South Dakota but then changed his mind and signed a letter of intent with UNI.

Soko redshirted in 2017 and began seeing spot duty with the Panthers the following season. He played in nine games in 2018, carrying the ball 15 times for 47 yards, and he made similar contributions in 2019 before the devastating injury to his left Achilles in a game against North Dakota State.

He underwent surgery to reattach the tendon but doctors weren’t optimistic about his recovery.

“I couldn’t walk for like two years and doctors told me I wouldn’t play again because of how bad my foot was,’’ he said.

It didn’t help that the COVID-19 pandemic settled in just a few months after his surgery. Soko went home to live with his parents, who had moved to Cedar Rapids while he was still playing at Muscatine, and he took online classes during the spring of 2020.

“I didn’t have anybody to help me because of COVID so I just rehabbed on my own,’’ he said.

He also decided to put his name into the NCAA’s transfer portal and seek a new place to resume his career.

He had a few offers but he missed his parents while living with a host family in Muscatine during high school. The idea of staying in Cedar Rapids and playing for Coe was an attractive option but it wasn’t the only factor in his decision.

“The reason I really went to Coe was the coaching staff and the players,’’ Soko said.

During the summer after the injury, he met a Coe assistant coach who told him he had suffered a similar injury during his playing days but was able to return to competition. He encouraged Soko to keep trying to rehab.

In the end, the Achilles healed better than anyone expected.

“I feel like I can run better than ever,’’ Soko said. “After the first game (against Cornell), everything felt good.’’

He rushed for 71 yards in 13 carries in that game. It obviously felt even better Saturday as Soko broke loose on a 73-yard run for the first points of the game and continued to produce all afternoon.

He admitted that the level of competition in NCAA Division III isn’t quite what it was at UNI, which plays at the FCS level.

“It’s a little bit different,’’ he said. “I really wasn’t the biggest guy at UNI or even in high school, and I’m still not the biggest here at Coe. The difference is just the speed a little bit, but it’s still football.’’

Although he is listed on the roster as a junior, Soko technically has three more seasons of eligibility at the college level since 2019 counted as a medical hardship year.

“I love football so I just want to keep playing as long as I can and get my degree, get my masters,’’ he said.

He is majoring in criminology and exercise science, and hopes to either get into law enforcement or coaching, maybe both.

“I just want to help people,’’ he said. “When I was in Muscatine, there were cops who helped change my life. I love sports and I want to stay involved in that.’’

Former Muscatine High School star Alphonso Soko carries the ball for Coe College against Cornell in the season opener. Soko rushed for 71 yards and two touchdowns in his Coe debut.

Alphonso Soko, a two-time all-state selection at Muscatine High School, is now the starting running back at Coe College after spending three years at Northern Iowa. 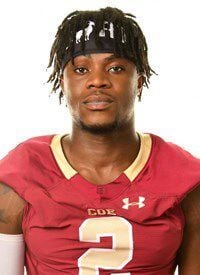