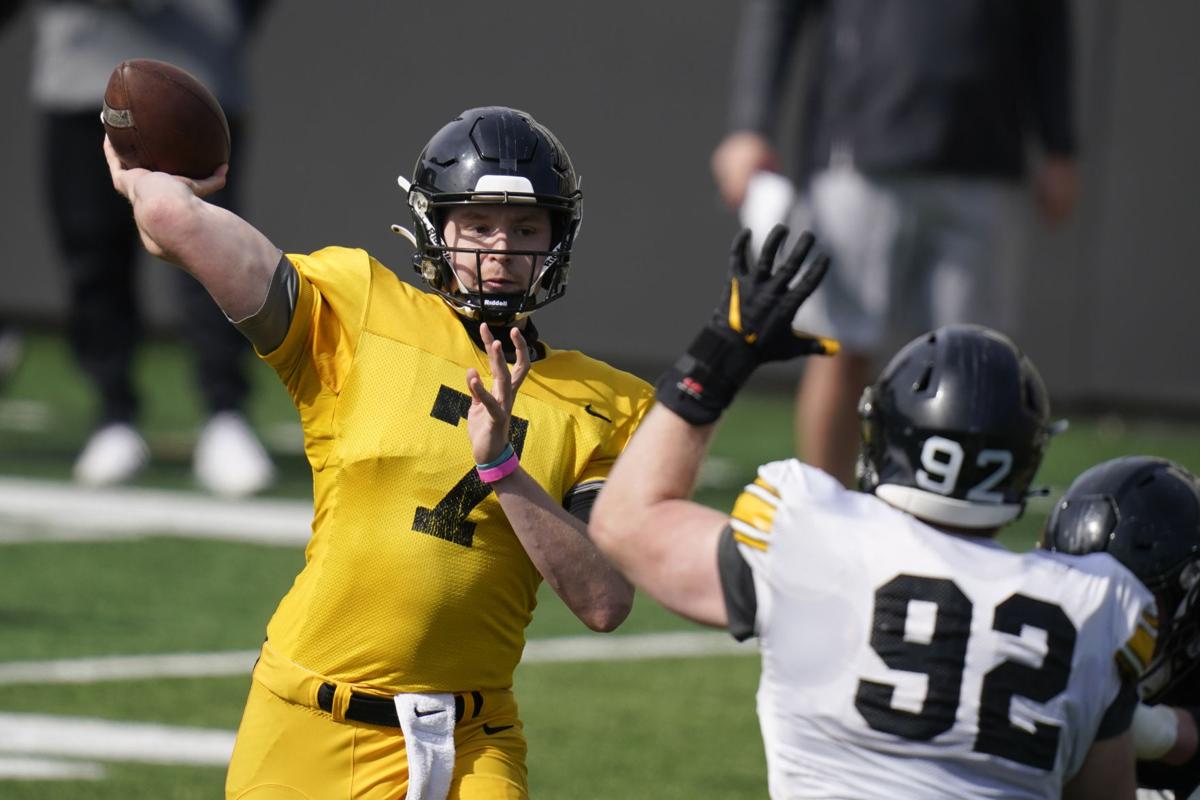 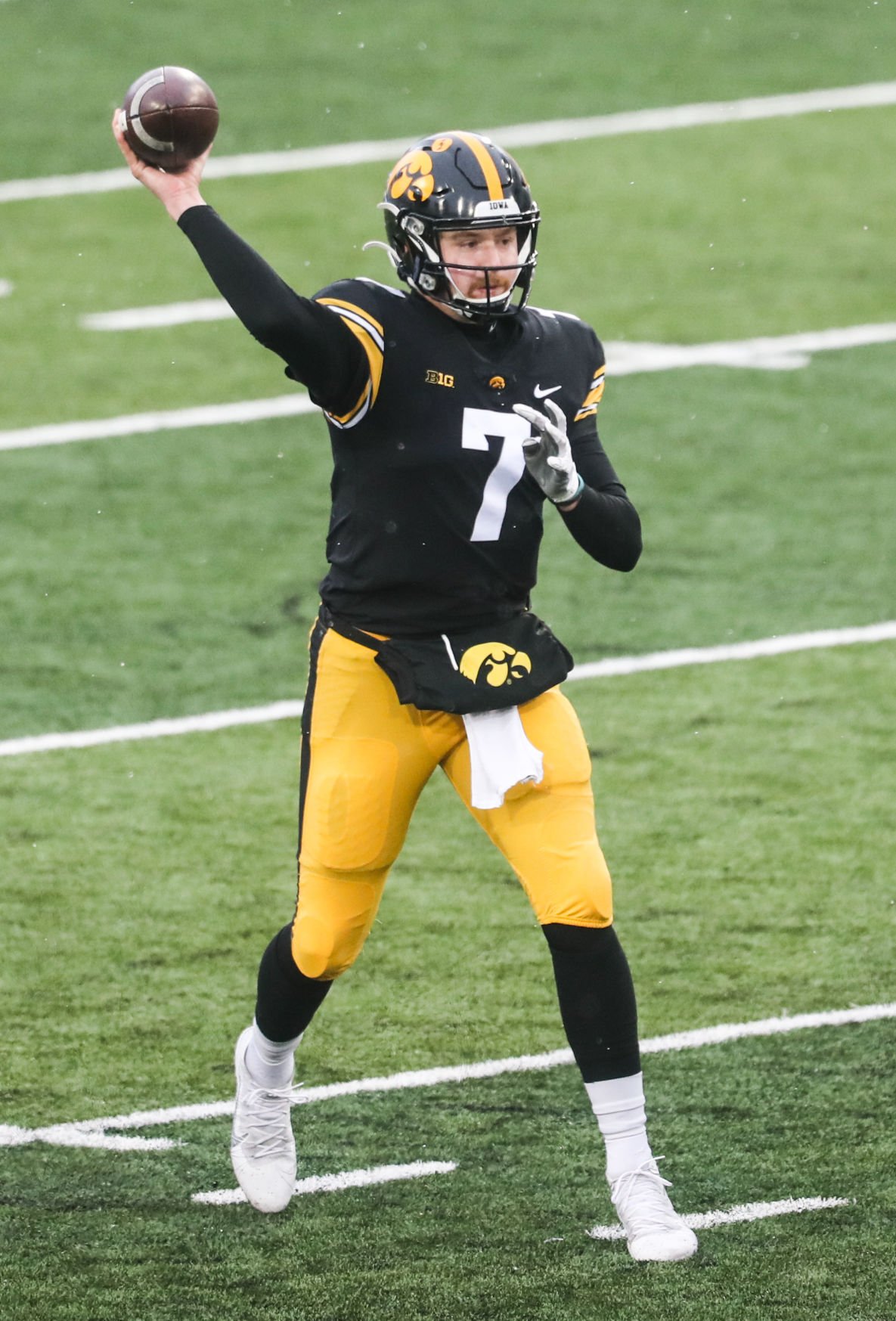 Iowa’s quarterback Spencer Petras throws a pass downfield during a game against Wisconsin last year. The Hawkeyes won their final six games of the season last year with Petras under center.

IOWA CITY — Spencer Petras has enjoyed a typical summer for a starting quarterback.

He’s thrown thousands of passes to Iowa receivers, tight ends, running backs and fullbacks, working to refine the connections that will ultimately dictate the success level of the Hawkeye passing game.

As those players develop the cohesion Iowa will need to grow its offensive game in 2021, Petras continues to work on his own game.

While he did lead the Hawkeyes to victories in their final six games last fall, Petras expects more following a rough-around-the-edges debut season as Iowa’s starter under center.

Spring practices that would have benefited Petras in his transition from reserve to starter were canceled because of the COVID-19 pandemic.

And before the start of the season was delayed and then reset, even summer workouts were limited and sporadic as players including the Iowa quarterback dealt with quarantines related to the coronavirus.

Petras said Wednesday he missed 3 1/2 of the seven weeks of work the Hawkeyes put in last summer because of quarantine or contact tracing issues.

All had impact and while Iowa overcame an 0-2 start to finish 6-2, inconsistencies in Petras’ performance left him knowing he had to improve before the 2021 season begins.

“It’s nice to pretty much be back to just football, working to develop the rapport with my teammates,’’ Petras said.

He suspects that is the consensus of the team.

“It’s just easier knowing that on Monday I’m going to be at football and not have to worry about if someone tested positive or contract traced or whatever,’’ Petras said.

“I think from a physical standpoint, it’s probably more challenging right now because we’re doing more work than we did last summer. But that’s why we’re here, to prepare for the season. That’s definitely good.’’

Iowa coach Kirk Ferentz has said he was pleased with the growth Petras showed as he worked through this year’s spring practices, but the Hawkeyes’ junior quarterback wanted more.

Petras hired a New Jersey-based quarterbacks coach to help him iron out inconsistencies in his game.

Tony Racioppi of the TEST Football Academy in Martinsville, N.J., has worked with Petras since the end of Iowa’s spring semester.

“It’s been very beneficial for me,’’ Petras said, describing a little of how Racioppi has helped.

“When I make throws, I need to be balanced. For me, I’m more of an up-and-down misser as opposed to a left-and-right misser and different things go into that.

Racioppi worked with Petras’ predecessor, Nate Stanley, as he prepared for the NFL Draft following the 2019 season.

“I talked with Nate about what he got out of it and I felt like it was something I could benefit from,’’ Petras said. “It’s a chance to work and get better.’’

Petras is among nearly a dozen quarterbacks with Football Bowl Subdivision programs who have spent time working with Racioppi this year, providing training that goes beyond what quarterbacks are getting within their own collegiate programs.

The focus is on fundamentals and the time spent centers on individual training that is limited as teams prepare.

While Iowa quarterbacks coach Ken O’Keefe can't work on a daily basis with Petras until fall camp opens, he has talked regularly with Racioppi as he works with Petras.

The personalized training program the Iowa quarterback is receiving is designed in consultation with the Hawkeyes’ veteran quarterback coach.

Most of what Petras is working on centers on consistency in his mechanics and continued development of his footwork.

He spent a week in May in New Jersey working with Racioppi and returned to the East Coast for additional work a couple of weeks ago, joining Stanley in working with the former NCAA Division III quarterback who has developed the reputation for being among the game’s top instructors.

“It’s been helpful and I think it all will help me get to where I want to be this fall,’’ Petras said. “It will help me become better as a quarterback and gain the consistency we all want.’’

Petras completed 57.1% of his passes last season, well short of the target of a 65% completion rate he has set for himself this fall.

“Everything I’m working on, here or with Tony, the more time I spend on it, the better,’’ Petras said. “It’s all designed to help me become a better quarterback.’’

Big Ten commissioner Kevin Warren said he has no regrets about the conference's handling of the COVID-19 pandemic during his first year on the job.

Walking into Lucas Oil Stadium for Thursday's Big Ten kickoff was a trip down memory lane for Bret Bielema, a return to where the new Illinois coach and former Iowa player coached his last Big Ten game.

Iowa linebackers Jack Campbell, Seth Benson are preparing for expanded roles as the Hawkeyes work toward the start of the 2021 season.

With approximately 70 percent of his players vaccinated for COVID-19, Iowa coach Kirk Ferentz hopes for a healthy start on and off the field for his Hawkeye football team.

Jim Polzin: Why a 'matured' Bret Bielema is good news for the Big Ten

Iowa baseball commit decides to play football for Hawkeyes instead

Iowa’s quarterback Spencer Petras throws a pass downfield during a game against Wisconsin last year. The Hawkeyes won their final six games of the season last year with Petras under center.