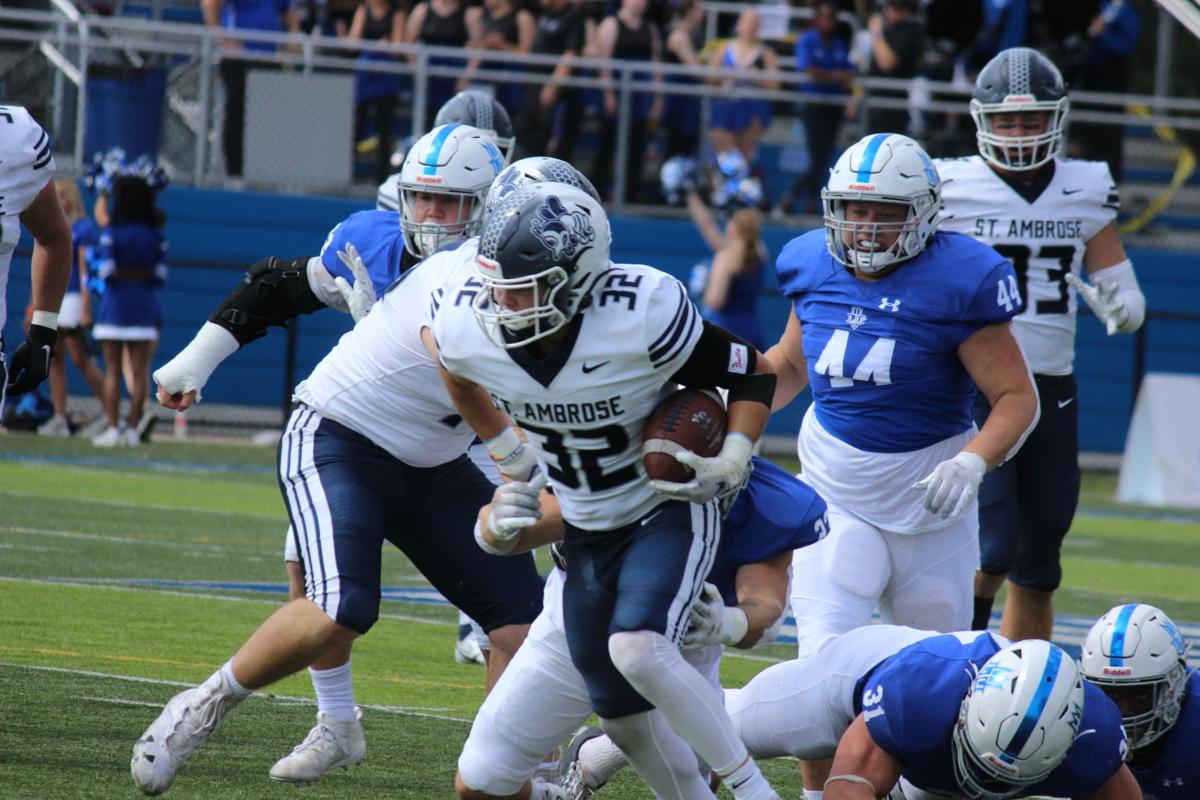 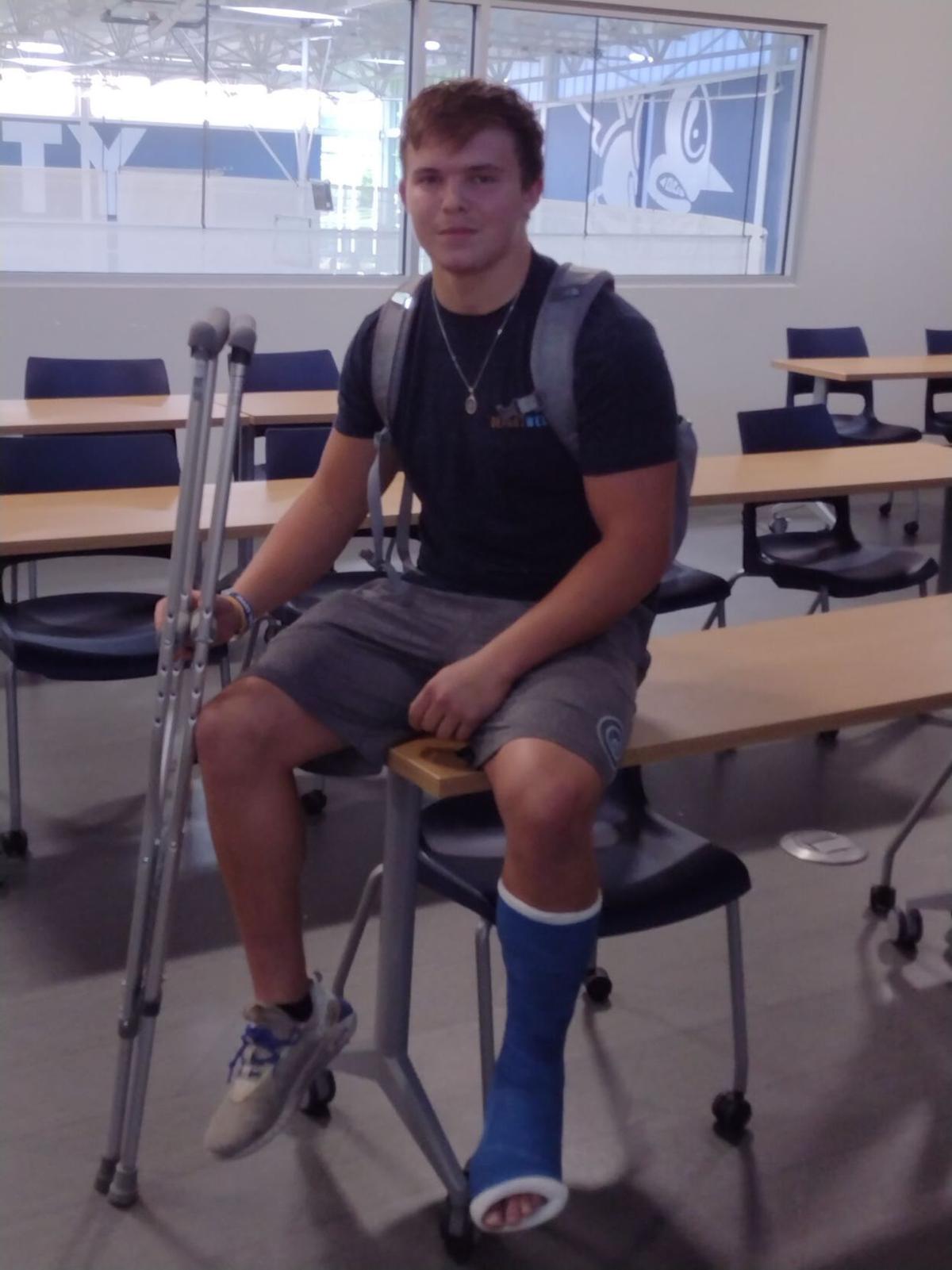 Sidelined with a cast on his left leg is not where St. Ambrose University running back Cade Gorzny wants to be right now. Despite missing a game because of the injury, the former Sterling Newman High School prep is still SAU's leading rusher this season. 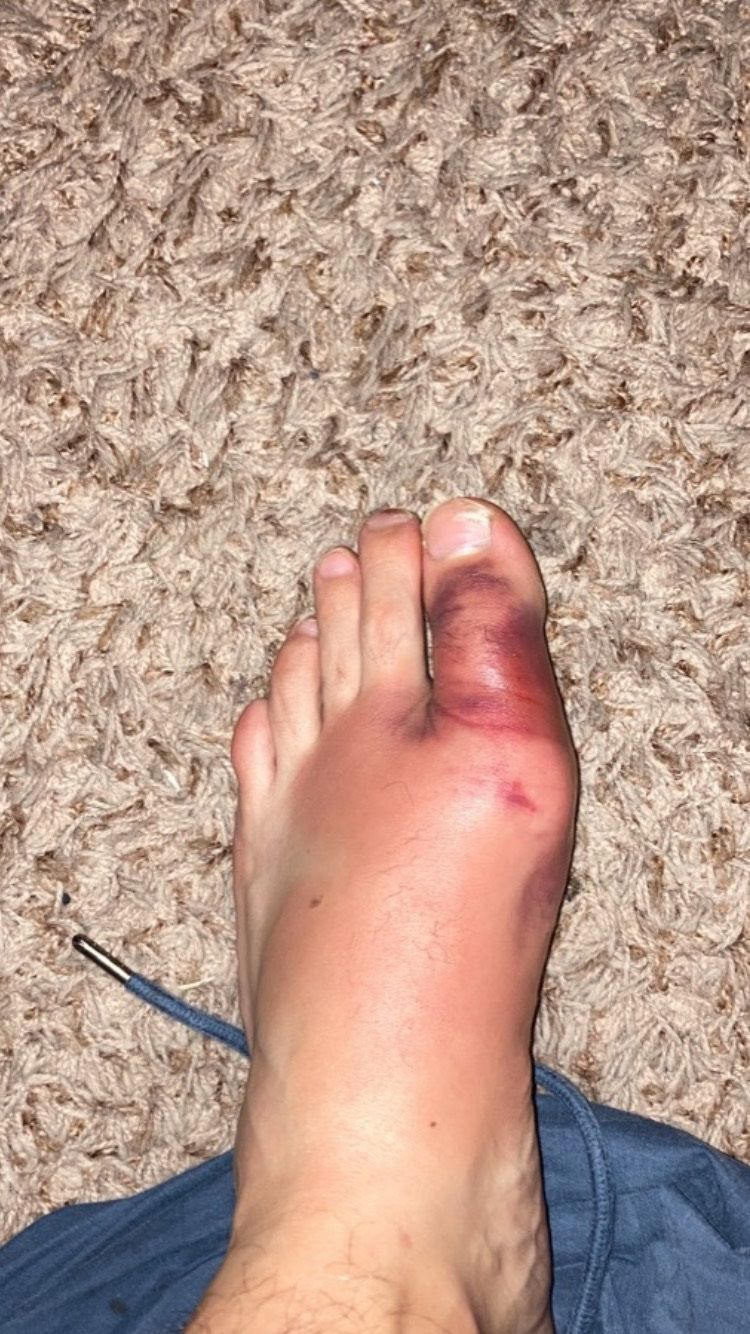 This what St. Ambrose University running back Cade Gorzny's injured toe looked like the night after he played an entire game on it, rushing for 92 yards in a victory. 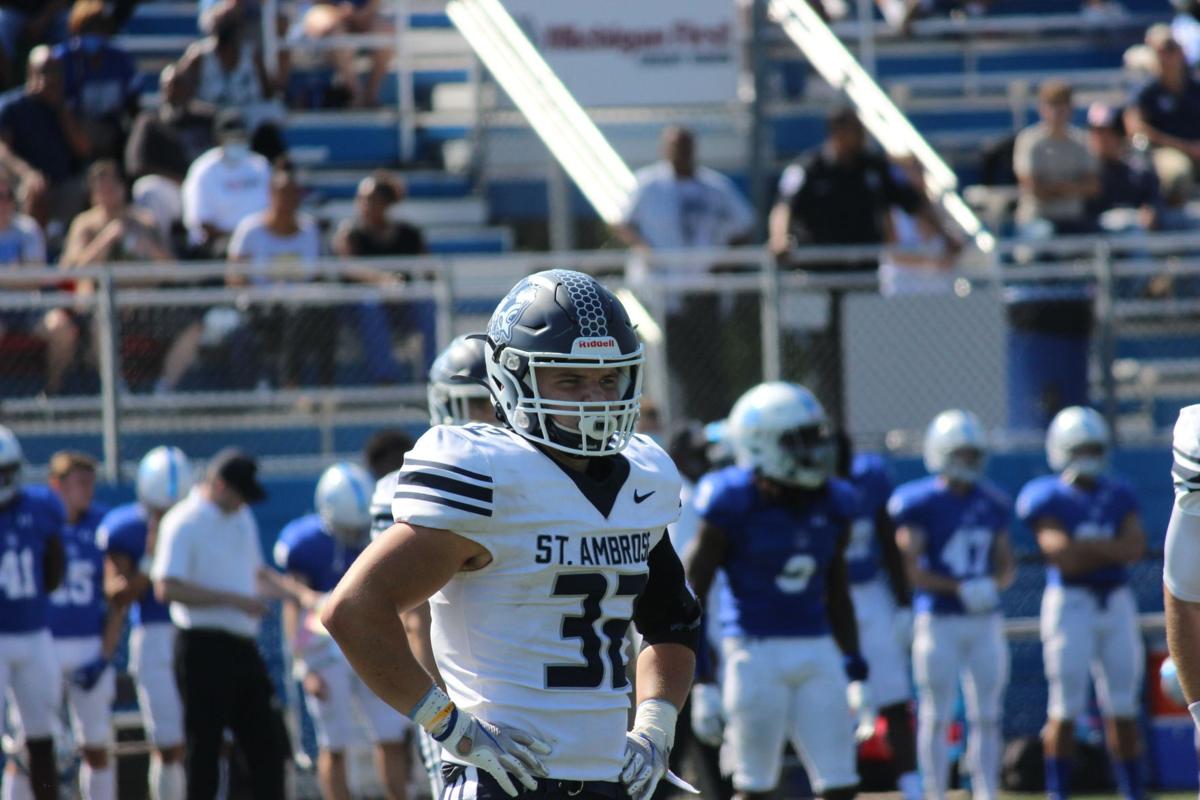 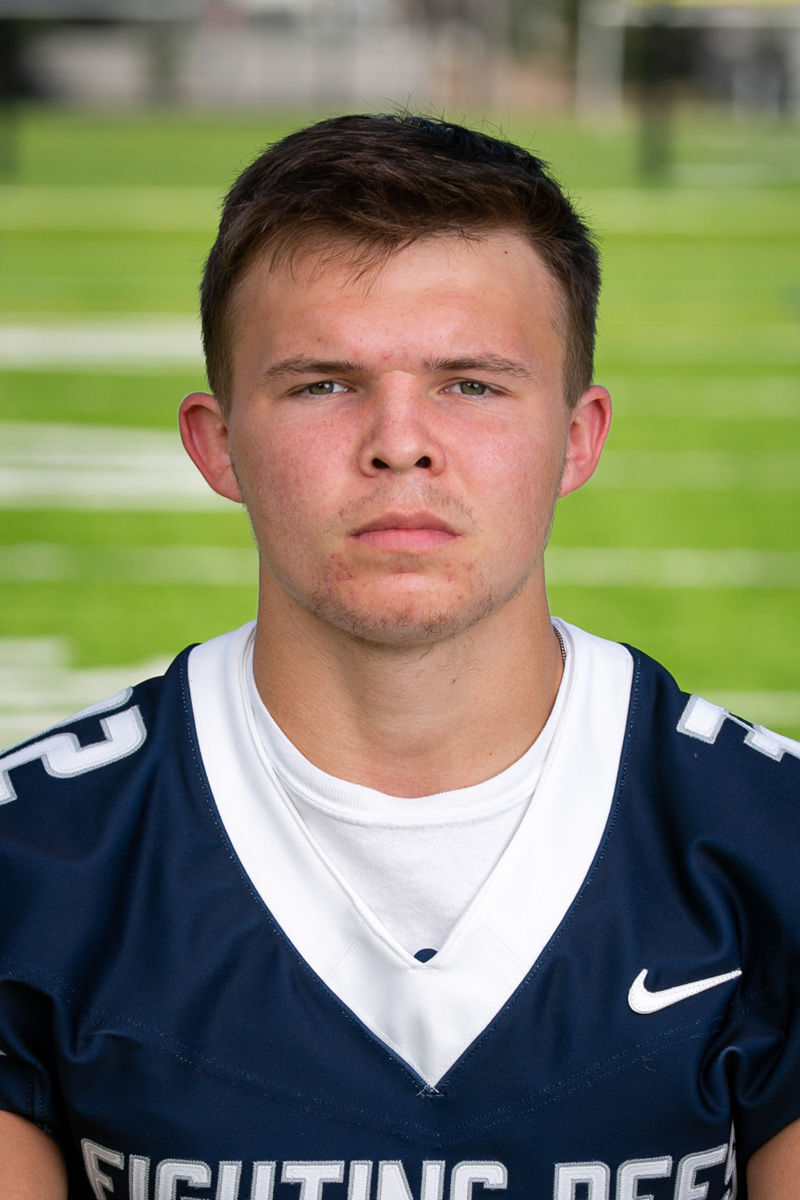 When he chose to not play football his freshman year of college, it didn't take long for Cade Gorzny to get the itch to get back in competition.

“I figured after high school that I didn't feel like I needed to play a sport in college,” said Gorzny, who attended Kirkwood Community College in Cedar Rapids to work toward a CNA degree.

“I played three or four sports growing up and not playing a sport that first semester really bugged me,” he said. “I got super bored and the hunger to get back … I had to do something.”

Now, being forced to the sidelines by what he said he has been told is either a broken toe or a hyperextension injury, St. Ambrose University's leading rusher is again itching to get back on the field after missing last week's overtime road loss at Judson.

“This is terrible,” said Gorzny, who is sporting an Ambrose blue cast on his left leg and missing time in pads with his teammates. “They took me out for one drive in the Trinity game and I couldn't stand it. … It sucked having to watch the game on live stream this past Saturday.”

How much does he hate to not be in uniform and contributing on the field? The resolve of a player SAU coach Mike Magistrelli described as “hard-nosed” answered that question on Oct. 2, the day of the injury.

“I did it in the first drive against Trinity,” Gorzny said. “I'm not sure how it happened; all I know is that I was being wrapped up by the defender around my left leg. I came up and knew my foot was hurting really bad. I didn't put much thought to it and just kept playing.”

And all he did that game, despite the early injury, was rush 17 times for 92 yards, just off teammate T'Nalege Hall's 95 yards that led the squad that day.

“I thought to myself that if it was broken that I would probably be out for the season and I can't come out on the first drive; I have to play through this game,” Gorzny said. “… I just tried to play through it. I've been stepped on before and played through it and just didn't put much thought into it.”

Until halftime, at least.

“I looked at it at halftime and it was purple all along the side of my foot,” said Gorzny. “... Putting my shoe back on, I was in a lot of pain. … I was just going to go until I couldn't go anymore.”

He did finish the game and despite missing last week's loss, still leads the Fighting Bees with 450 yards in just 53 carries (8.5 yards per carry) to go with two touchdowns.

“It got worse that night and the next morning I couldn't put any weight on it,” he said. “It looked pretty gruesome. Everybody was saying 'you broke it' because my foot was purple. I went to the trainers when I figured it was broken.”

Trying to put aside pain is nothing new for the senior with a year of eligibility left. In Week 3, he sustained a strained left rotator cuff injury, but played through that pain as well to contribute what he could.

Gorzny, admitting he feels his best football is still ahead of him, said that his dad pushing him and playing for “old school” coaches at Sterling Newman High School taught him how to play through pain.

“There's a difference between hurt and injured,” Gorzny said. “You can play through hurt, but you can't play through serious injury.”

Gorzny said he was hoping to see his doctor late this week ahead of another scheduled appointment this coming Monday.

“Hopefully I get this off,” he said pointing to the cast that stretched three-fourths of the way up his shin from his toes.

His desire to get back on the field is as strong now as it was that first semester his freshman year when he didn't have the sport.

He said that a few high school friends were already in school and on the SAU football team and he made the move to Davenport ahead of second semester that school year.

Gorzny, a Human Performance and Fitness major who is minoring in marketing and hopes to be a strength coach, jumped back in for spring ball.

He said that “sitting out that first fall” season was more agonizing than having this season interrupted by the injury.

“I'm thankful that I've gotten to play the games I've gotten this year,” he said. “Just being here and getting to play is a blessing.”

And the coaching staff would love to have him back in action to add to the depth at the running back position.

“Yeah, obviously we're excited to get him out of the cast and see how quickly he can get back on the field,” Magistrelli said. “If it was up to him, he would be out there running around in the cast.”

One Eighty founder to be honored at Heroes Game

A Davenport man will be recognized as Iowa’s community hero for 2021 at Friday’s Iowa-Nebraska football game.

LINCOLN, Neb. — Like a number of his teammates on the Iowa football team, Spencer Petras wasn’t feeling so hot earlier this week.

Sidelined with a cast on his left leg is not where St. Ambrose University running back Cade Gorzny wants to be right now. Despite missing a game because of the injury, the former Sterling Newman High School prep is still SAU's leading rusher this season.

This what St. Ambrose University running back Cade Gorzny's injured toe looked like the night after he played an entire game on it, rushing for 92 yards in a victory.