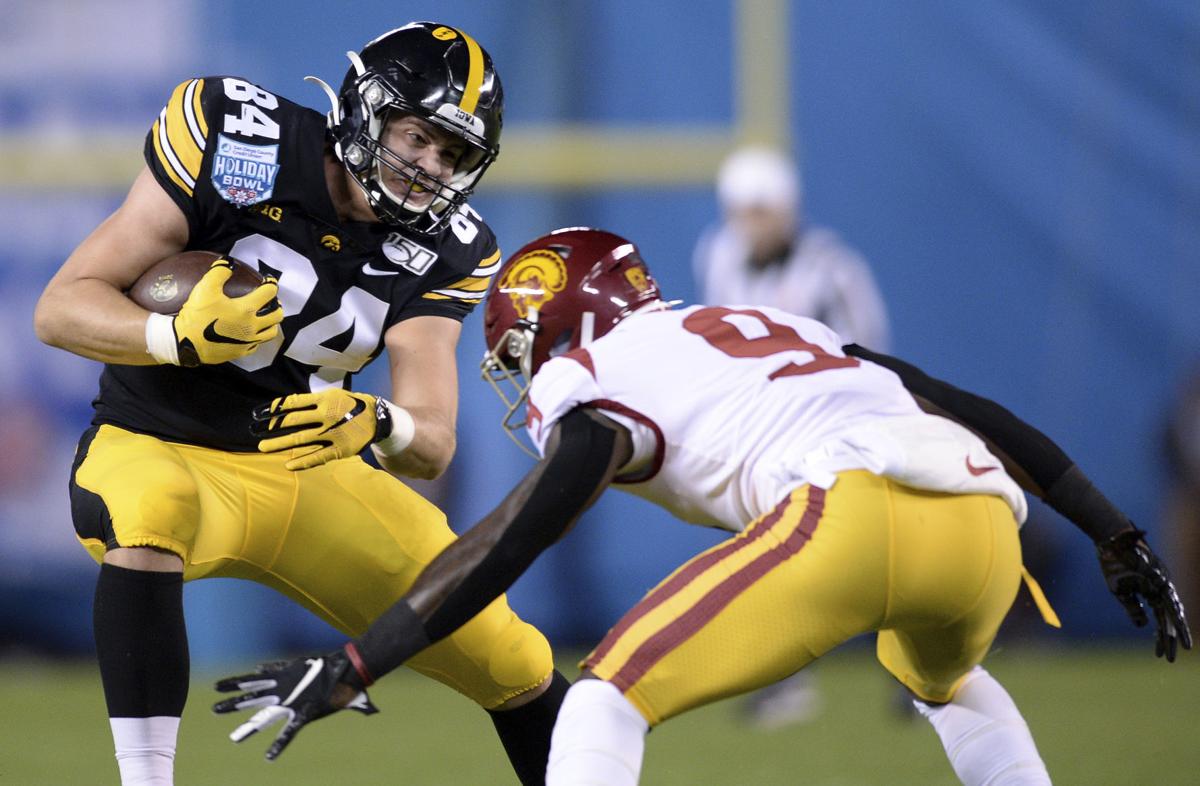 Iowa tight end Sam LaPorta looks for yardage after a first-half reception as USC cornerback Greg Johnson works to make a tackle during the Hawkeyes' 49-24 victory in the Holiday Bowl last season. 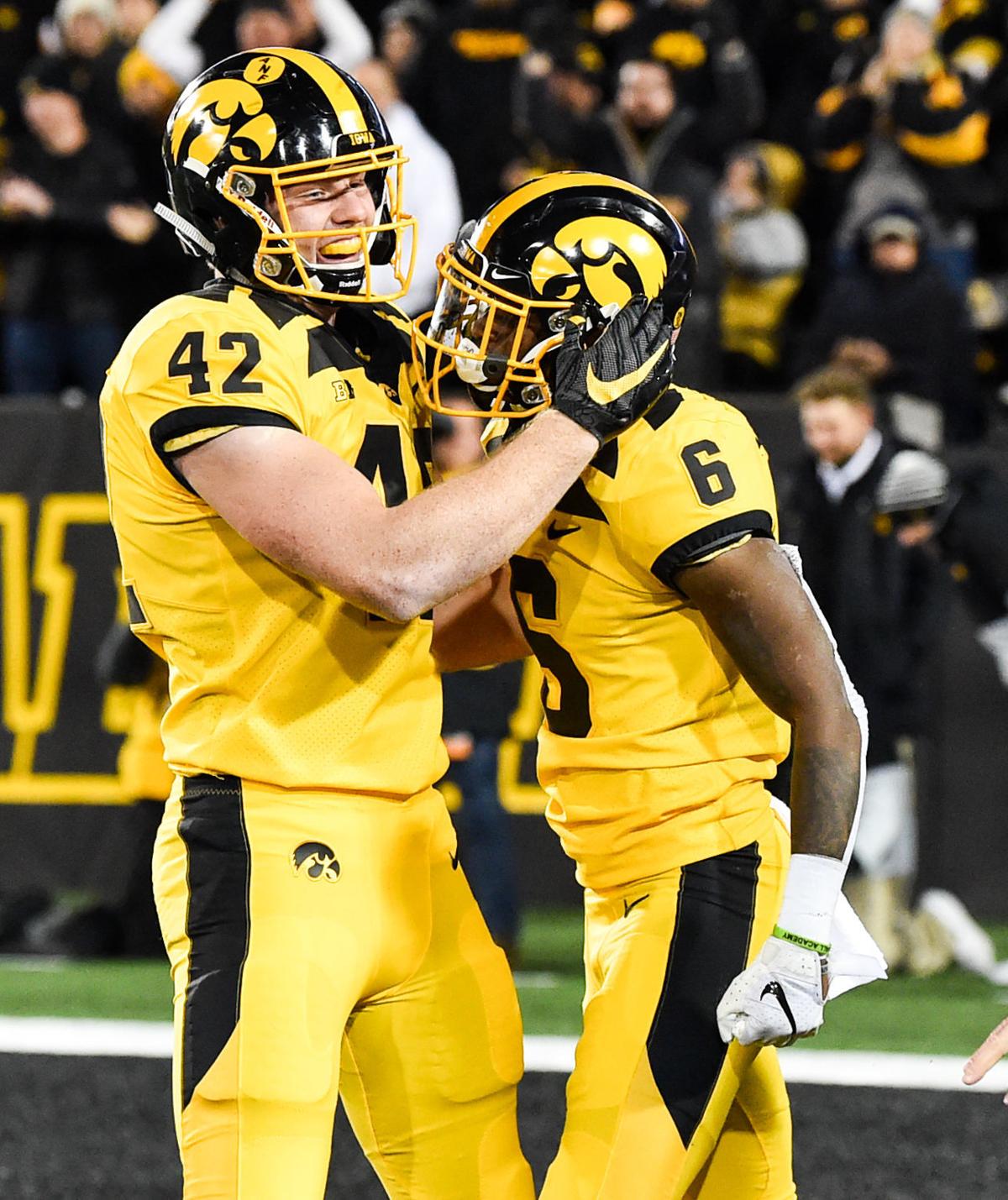 Overall growth at the receiver position and the emergence of Tyler Goodson at running back changed the way the Iowa football program utilized its tight ends last season.

With T.J. Hockenson and Noah Fant first-round picks in the 2019 NFL Draft after leaving the Hawkeyes early, last season was a year of transition for Iowa at tight end but what transpired creates an expanded vision for the spot in 2020.

Working with senior Nate Wieting and junior Shaun Beyer, true freshman Sam LaPorta emerged as the season progressed and was the Hawkeyes’ leading receiver as Iowa concluded its 10-3 season with a 49-24 victory over USC in the Holiday Bowl.

The 6-foot-4, 242-pound Highland, Ill., native caught a career-high six passes for 44 yards in the victory over the Trojans after providing hints of his potential with critical catches during late-season games against Northwestern and Nebraska.

LaPorta said following the bowl win that his effort was a byproduct of offensive cohesion.

“When everybody is working together, it allows us to play fast, physical and together,’’ LaPorta said. “It allowed me to make some plays and get singled out. I made those plays. It was a great opportunity for me and the rest of the team.’’

That helps position LaPorta for opportunities at a position which will likely be more involved in the play-making portion of the Hawkeye offense this season.

While blocking will remain part of the job description for Iowa tight ends, expanded possibilities in the passing game exist.

After being used primarily on special teams through the first seven games, LaPorta caught 15 passes for 188 yards last season, averaging 12.5 yards per gain.

The bulk of connections in the passing game with tight ends came during the final games of the season.

After combining for 10 catches for 121 yards through eight games, Hawkeye tight ends caught 22 balls covering 301 yards during the final five games of the year.

LaPorta had plenty to do with that.

Much like Hockenson, LaPorta was a receiver at the high school level. He caught 68 passes for 1,457 yards and 19 touchdowns as a senior at Highland High School in the eastern suburbs of St. Louis and brings that skill set to the field as he prepares for his sophomore season.

Beyer is a fifth-year senior who shared the second line on the depth chart with LaPorta late in 2019. He brings strong blocking skills to the position.

LaPorta and Beyer are the extent of Iowa’s game experience at tight end.

Miamen caught 25 passes for 500 yards as a high school senior while playing in the Peoria area.

Elijah Yelverton, a 6-6, 220-pound Texas native who enrolled at Iowa in January, selected the Hawkeyes from a collection of 36 offers that included Auburn, Baylor, Florida, Georgia, LSU, Michigan and Penn State

If Big Ten football teams are able to play this fall, competition will be limited to other Big Ten teams.

Bob Reade, the man who put Geneseo High School football on the state map in Illinois and turned the Augustana College program into a national …

Four of the 30 tests for COVID-19 conducted by the Iowa athletics department during the week of July 6-12 tested positive for the coronavirus.…

Broderick Binns has been given an opportunity to make a difference in the life of every student-athlete who steps foot on the Iowa campus.

Iowa athletics has dealt with race issues before

Recent weeks haven’t been the first time race has been an issue within the University of Iowa football program.

There are no guarantees.

Final plans remain undetermined, but football season ticket holders at Iowa, Illinois and Iowa State are beginning to get an idea of what the …

Duncan, Smith-Marsette not among Iowa questions

Iowa has both all-American caliber answers and some significant questions on special teams as it works toward the start of the 2020 football season.

(The Quad-City Times is rerunning some of Don Doxsie's most memorable columns from the past. This column originally appeared in the Times on J…

Iowa tight end Sam LaPorta looks for yardage after a first-half reception as USC cornerback Greg Johnson works to make a tackle during the Hawkeyes' 49-24 victory in the Holiday Bowl last season.