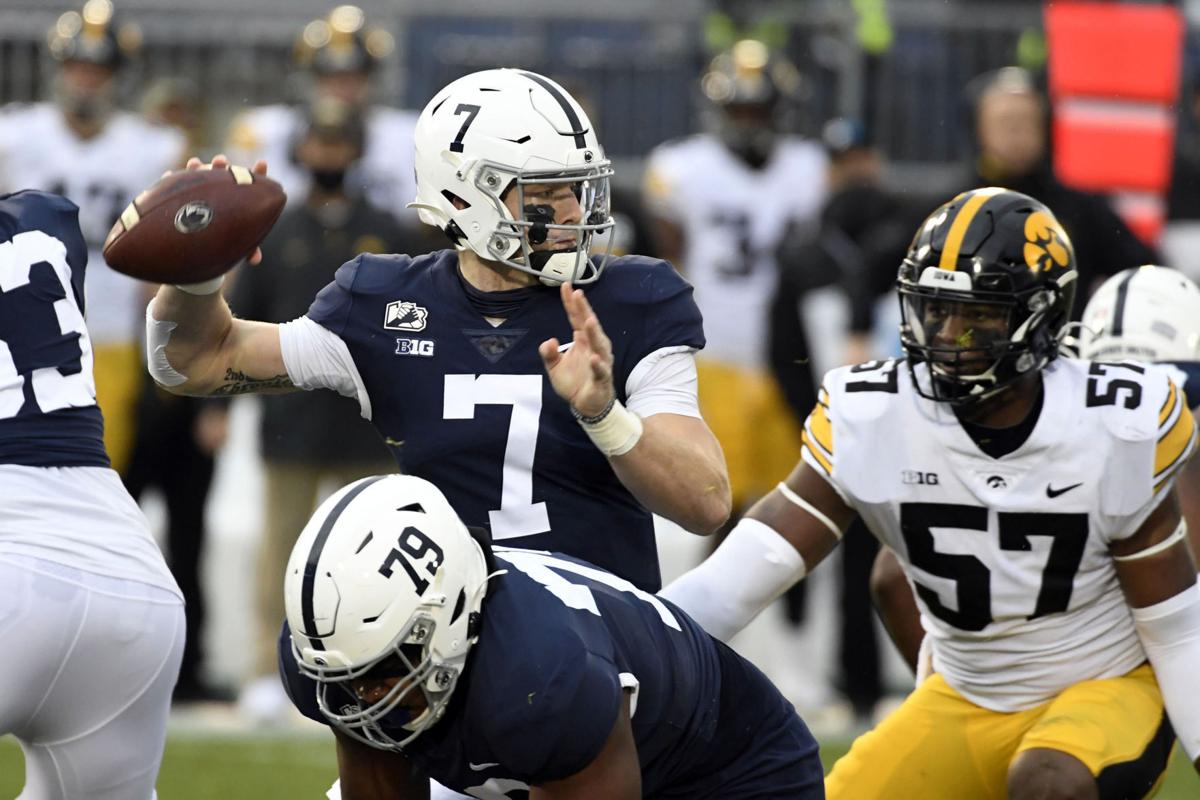 Iowa defensive end Chauncey Golston (57) is hoping his versatility and ability to play multiple positions on the defensive line will improve his draft stock. Golston is shown here closing in on Penn State quarterback Will Levis (7) during last season's Big Ten Conference battle, a Hawkeyes victory. 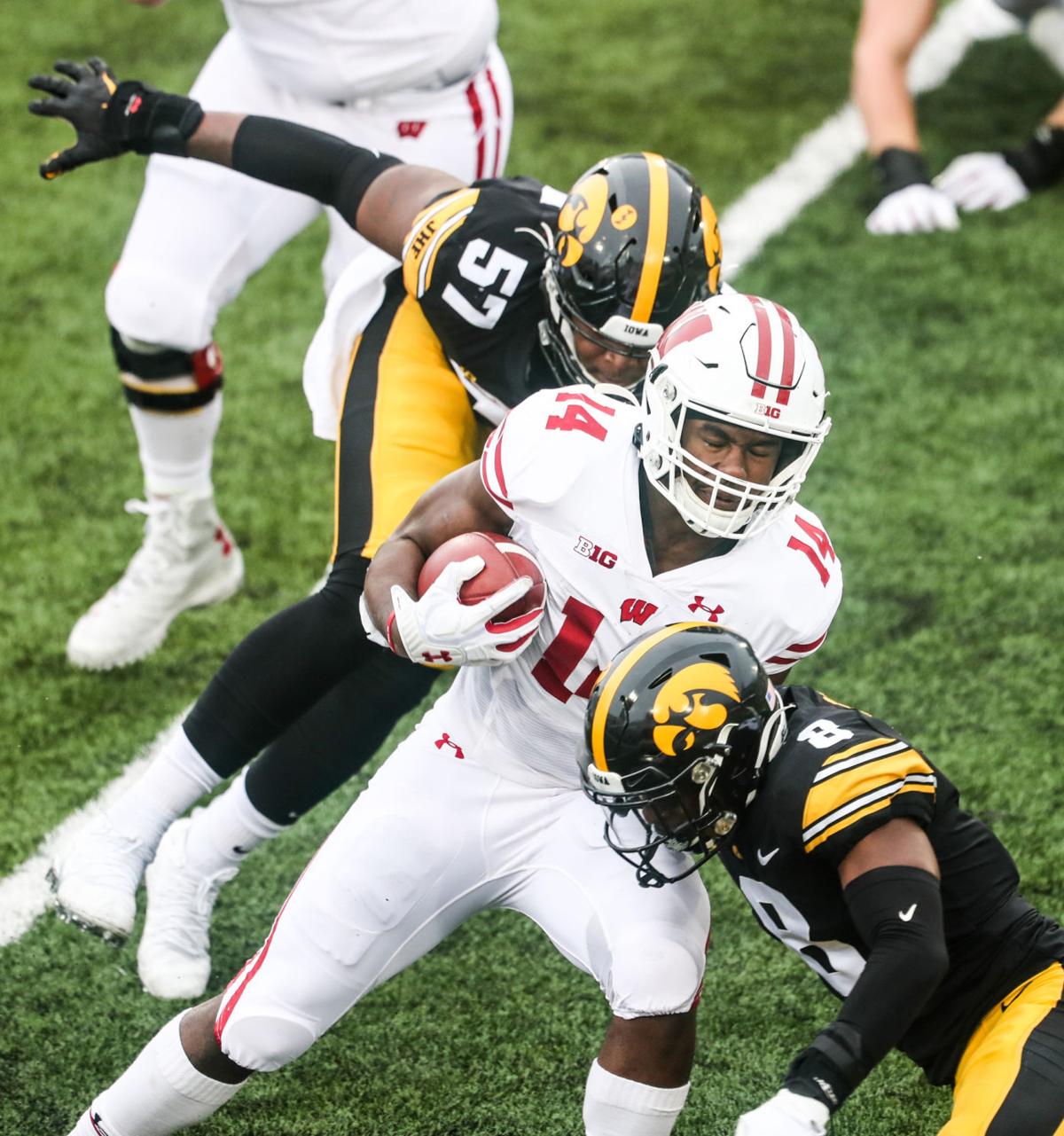 A willingness to adapt has helped Iowa’s Chauncey Golston improve his position as the NFL Draft approaches.

The Hawkeye defensive end demonstrated that when he participated in the Senior Bowl earlier year, shifting from an end position to spend most of the week working at tackle in front of NFL scouts.

“When I got there, we were in our first D-line meeting and I saw that there was like 19 defensive ends and two defensive tackles,’’ Golston recalled during a recent video conference.

“So on my way to practice, I texted coach (Kelvin) Bell and I was like, ‘There’s a lot of defensive ends here and they’re like smaller defensive ends. I’m a bigger end.’”

That led Golston to offer to shift inside to a tackle spot, a move that not only allowed him to get more reps in front of scouts throughout the week but also demonstrated to his potential employers that he was a team-first guy.

“It gave me a chance to get a lot of work in, which is what I wanted,’’ Golston said. “With the way things are this year, there aren’t many chances to work out in front of scouts. I was grateful for the event and grateful for the chance to be a part of it.’’

With no NFL Combine this year and NFL teams unable to host individual workouts because of concerns over COVID-19, the Senior Bowl experience and Iowa’s Pro Day provided Golston with a stage to perform.

Those looks have positioned the 6-foot-5, 270-pound Detroit native for an opportunity to become the third Hawkeye defense end to be chosen in the draft in as many years, following Anthony Nelson in 2019 and A.J. Epenesa last year.

Continued growth has positioned Golston to be among players selected when the three-day NFL Draft begins Thursday in Cleveland, most likely as a mid- to late-round choice.

After leading the Big Ten Conference and ranking sixth nationally in 2019 with three fumble recoveries, Golston earned first-team All-Big Ten honors last fall after recording 45 tackles, including 8.5 tackles for a loss and 5.5 sacks.

He also intercepted one pass, forced one fumble and broke up one pass during a productive eight-game senior season.

“When I think of Chauncey, the one thing that really comes to mind is improvement,’’ Iowa coach Kirk Ferentz said. “We’re a program that is driven by improvement and for Chauncey, it was year by year.’’

Listed at 225 pounds as a freshman, Golston gained weight and strength during his time with the Hawkeyes that was mirrored by the progress he made on the field.

“He just kept getting progressively better. He played really well for us two years ago and played his best football last year,’’ Ferentz said.

The confidence gained through his performance positioned Golston to do what he did at the Senior Bowl, displaying a willingness to shift to a new position and learn as much as he could from the NFL coaches he was working with that week.

He said Bell, his defensive line coach at Iowa, encouraged him to seek any reps he could get at a tackle spot.

“I put myself in a different position, went to work and became comfortable when I could have been in an uncomfortable spot,’’ Golston said. “I was able to show my versatility, show that I was able to step in and help.’’

Golston demonstrated the same high-energy, high-motor abilities that were constants throughout his collegiate career.

“You never want to be a one-trick pony,’’ Golston said. “I showed that I could play every spot on the line and I also showed that I had a high football IQ and the films show I can perform at multiple positions at a high level.’’

While he lined up primarily at left end for Iowa, Golston also took snaps at right end and did slip inside to line up at a tackle spot on occasion in passing situations during his career.

Those experiences, many coming during the 21 games he started at the end of his Hawkeye career, are also helping him now as he prepares for the draft.

“I learned so much during my time at Iowa, from coach Bell, coach (Reese) Morgan, and I’m thankful for the experiences I’ve had that have given me an opportunity to learn and grow, from being the young guy in the room to getting a chance to start,’’ Golston said.

He said that all matters now.

Iowa defensive end Chauncey Golston (57) is hoping his versatility and ability to play multiple positions on the defensive line will improve his draft stock. Golston is shown here closing in on Penn State quarterback Will Levis (7) during last season's Big Ten Conference battle, a Hawkeyes victory.