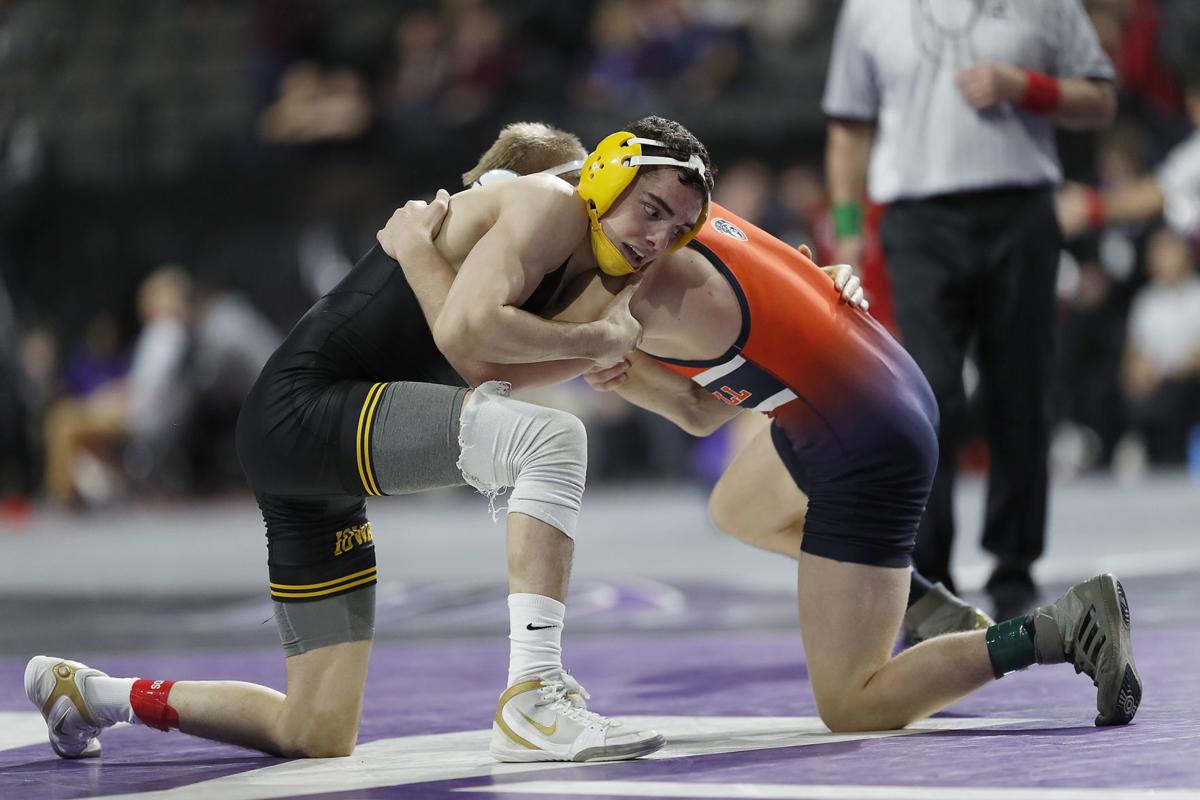 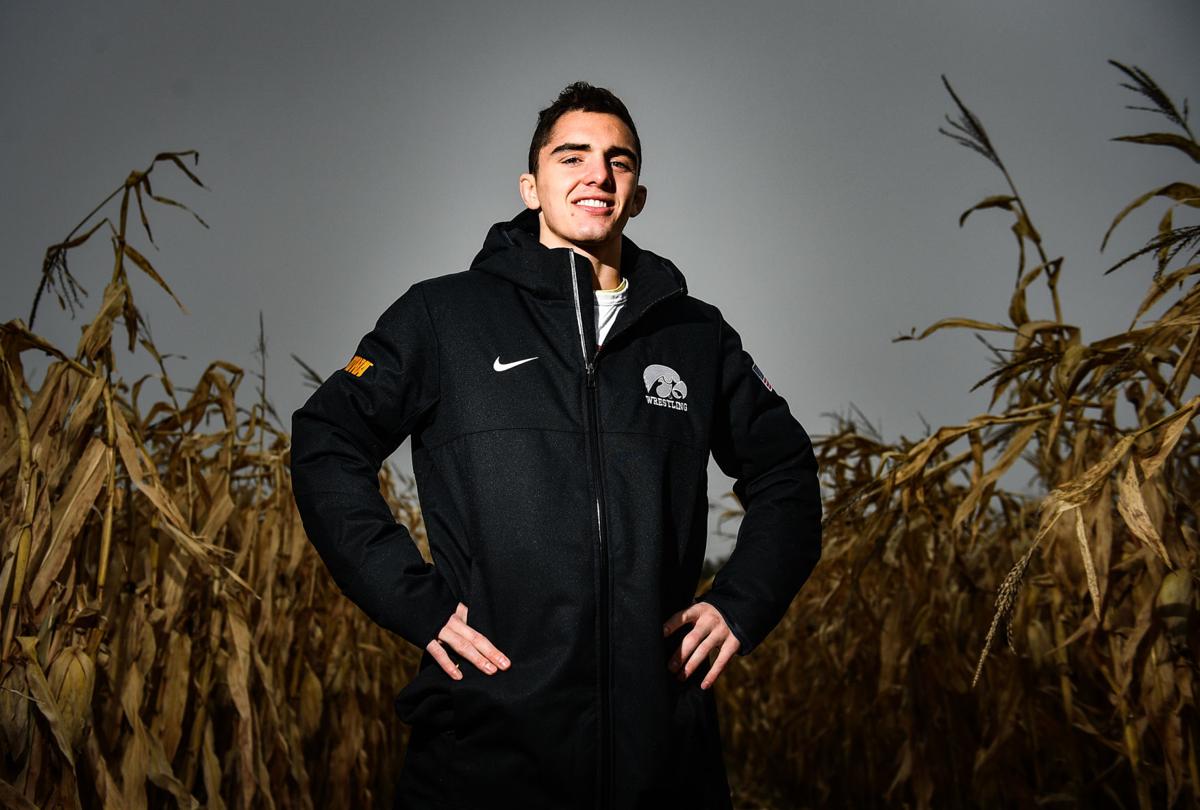 Shown here at media day prior to the start of his senior season with the Iowa wrestling program, Bettendorf's Paul Glynn will transition to a role with the Hawkeye Wrestling Club after receiving his undergraduate degree from Iowa today.

Paul Glynn begins a new chapter in his life today, but the Iowa wrestler from Bettendorf isn’t closing the book on a sport that has been his lifelong passion.

“I have never been able to picture a life without wrestling,’’ Glynn said. “In so many ways, it has shaped me into who I am and who I will always be.’’

Glynn will participate in a virtual graduation ceremony at Iowa today, receiving an undergraduate degree in sport and recreation management, but he won’t be straying far from the Dan Gable Wrestling Complex at Carver-Hawkeye Arena.

He has accepted an opportunity to help lead fundraising and external relationship efforts of the Hawkeye Wrestling Club, working to strengthen the program that since 1973 has provided training, coaching and resources necessary to help its athletes pursue World and Olympic champion aspirations.

“I’m really excited about the opportunity,’’ Glynn said. “I’m done competing on the mat, but I’ll still be in the room, be around the guys, mentoring them, helping them any way I can.’’

He came to the realization that he can still make a positive impact as he talked about his future with Iowa coach Tom Brands in recent months.

“I’ve spent a lot of time talking with Tom. He’d call and we’d just talk about life and things and the more we talked, the stronger I felt about finding a way to stay involved,’’ Glynn said.

“I think back to what Tom and Terry (Brands, Iowa’s associate head coach) did for me over the last few years and I’d love to be in a position to have the same type of impact on guys in the club and some of the young up and coming guys who are around.’’

The more Glynn talked with Tom Brands, the more he welcomed the idea of remaining around the program and assisting the Hawkeye Wrestling Club in its work.

He’s met with Randy Novak, the president of the club’s board, and talked about ways he can help elevate the organization’s fundraising efforts and its outreach.

“I see a good future and I’m anxious to become a part of it,’’ Glynn said.

He arrives at a time when Daniel Dennis is moving into the role as the coach of the Hawkeye Wrestling Club.

Glynn recalls watching Dennis compete for Iowa at Carver-Hawkeye Arena and welcomes the chance to work with the 2016 Olympian who moved into his role with the club last month.

“He’s good at what he does and it’s good to have him around again,’’ Glynn said. “With the new facility in the works, there’s a lot of excitement around everything here and I’m anxious to be a part of it.’’

Glynn completed his Iowa career with a 28-24 record at 133 pounds, including 14 dual starts for the Hawkeyes.

Coach Tom Brands praised Glynn’s leadership and reliability throughout the top-ranked Hawkeyes’ 2019-20 season, stepping into the lineup when needed and providing both Dan Hodge Trophy winner Spencer Lee and Austin DeSanto with a quality workout partner on a daily basis.

“He’s making our team better every single day with his willingness to help his teammates,’’ Brands said in January.

It was all part of a senior season that didn’t end the way Glynn or any of the Hawkeyes imagined.

With nine wrestlers seeded in the top eight for the NCAA Championships that Iowa was favored to win before it was canceled because of concerns surrounding the COVID-19 pandemic, Glynn missed out on an opportunity for a special ending to his collegiate career.

“We were right where we needed to be, and it was a tough way for it to end, but it was something that was out of our control,’’ Glynn said. “I couldn’t have asked for a better group of teammates or coaches to be around. I was blessed to be a part of it all and I wouldn’t have wanted to be anywhere else.’’

The opportunity to still be around now motivates Glynn in other ways.

While Iowa’s wrestling facilities, along with all other university athletic facilities remain closed for the time being, he suspects he’ll still find himself on the mat training with Lee on occasion.

“We like working out together. He’s such a high-level guy that I’ve learned so much from, a great leader,’’ Glynn said. “We have some good younger guys in the room, too. The future at Iowa is so bright and that’s one of the reasons I’m looking forward to still being around.’’

In his new role, Glynn will work to help keep that future bright.

“Coming into it, the way things ended this season, I’ve had a lot of time to reflect and being part of this and being involved in a sport I’m so passionate about, it’s right thing for me at the right time,’’ Glynn said. “I’m looking forward to seeing where it could lead and helping others realize their dreams.’’

Iowa has added an opponent with a reputation for being a nuisance for power-five football programs to its 2024 nonconference schedule.

Deuce Hogan has not attempted a pass or even participated in a practice yet for the Iowa football team, but the Hawkeyes' incoming freshman qu…

Ferentz: 'Change will begin with us'

Most sports fans have been anxious to hear any positive news on the re-opening of any of their favorite athletic endeavors.

From P-town to Iowa City, Heflin follows in Bielema's footsteps

With no spring football practice and limited online contact with his team in recent months, Kirk Ferentz is anxious.

Time remains on Gary Barta’s side.

Shown here at media day prior to the start of his senior season with the Iowa wrestling program, Bettendorf's Paul Glynn will transition to a role with the Hawkeye Wrestling Club after receiving his undergraduate degree from Iowa today.