CHAMPAIGN — In the lobby of the Demrjian Indoor Golf facility, the home of Illinois golf practice, trophies are spread everywhere.

Dozens of trophies and medals are crammed on shelves behind a couple panes of glass. Big Ten title trophies are put on shelves drilled up near the ceiling because there is nowhere else to put them.

Two conference title trophies sit alone on the table in the center like paper weights, simply because neither the rest of the Big Ten or the internal decorator of the facility can keep up with the Illini’s golf program.

The Illini have done nothing but win under coach Mike Small for the past two decades. Small couldn’t fit all of his Big Ten title rings on his fingers if he wanted to, with 12 titles in the past 13 seasons. Illinois has participated in the past 14 NCAA Championships.

He’s built the premier program in the region during his time in Champaign. It’s the most decorated program on campus.

"I wanted to build a program," Small said. "And people that know my personality, I just don't want to do something just to do it and take up time of the day. It has to be done right and it has to have some purpose to it. So I wanted a program not just good teams."

Small has done this after an impressive career winning a conference title as a player with the Illini alongside PGA Tour pro Steve Stricker in 1988 after finishing dead last in the conference his freshman year.

Small was second in the conference tournament behind Stricker and also became a member of the PGA Tour, playing in a dozen majors.

That career and life in golf started back in his hometown of Danville, where his father coached the team at the community college level. He would go to practices and be around the team.

His father and entire family have been a part of Illinois athletics. His father, Bill, was the captain of the 1963 Big Champion title basketball team. His brother, Andy, was an infielder on the conference-winning Illinois baseball team in 1990.

Small originally wasn’t always sold on the prospect of sticking around home.

"When you're a kid and you went to high school in Illinois, you always dream about going south and going to the big schools and playing golf in the warm weather," Small said.

But when he finished his high school career at Danville High School, tradition came calling. His girlfriend at the time, now his wife Ann, was going to school at Illinois as well. He also got into the business school and decided to go where his parents both went.

Small became a successful collegiate golfer before turning that into a long professional career. He also had the idea of coaching put into his mind by his college coach, Ed Beard.

“He thought I'd be good and he actually kind of got me hooked on it a little bit, kind of encouraged me to think about it, but I was playing full time at the time," Small said. "Then when I was struggling there after I lost my PGA Tour card and I was back on the Korn Ferry tour now, it became, 'That may not be such a bad idea, I need a little break.'"

Small then took the reins of the Illini program, and the rest is history. He’s developed numerous professional players and gotten successful players from all over the world, including current senior Belgian Adrien Dumont de Chassart, the winner of the past two individual Big Ten titles.

Players like Chassart, Thomas Dietry and Tommas Pieters, two players on pro tours, are among a string of Belgian players, and have carved out a worldwide brand for the program.

Now, the Illini turn to New Haven, Connecticut, where they play in the NCAA Regionals, seeking a 15th straight championship berth. The Illini are a top-four seed and hoping for more winning that has been a habit for this program.

“This is what we do and is what they came here to do," Small said. "This is what Illinois golf does, and we're not going to stall it out. We're not going to overthink it. We're gonna do the same thing we do every day. And that's kind of how we're going to parlay it and just keep going and not make it bigger than it is. It's a standard that we have. And we're gonna keep doing it until we have to recalibrate."

Illinois approved a four-year contract extension for Director of Athletics Josh Whitman. The extension keeps Whitman at Illinois through at least 2028.

After missing the season as a bubble team last year, Illinois softball is determined to make a splash in the 2022 NCAA softball tournament.

Kelly Ryono had dreamed of playing in the NCAA Tournament. In her first postseason at-bat for the Illini, she had an RBI double that was a bright spot in the team's opening round loss to Arizona.

Illinois had just one base runner in its elimination game loss to Missouri State in the Columbia Regional on Saturday.

How Barry Lunney Jr.'s time as a teacher prepared him for his big break

Alex Pihlstrom entered Champaign as a walk on tight end. Now he is the team's starting center after spring practice.

RJ Melendez showed flashes of skill and athleticism as a freshman. Now he'll have to put those together as a likely starter for the 2022-23 Illini. 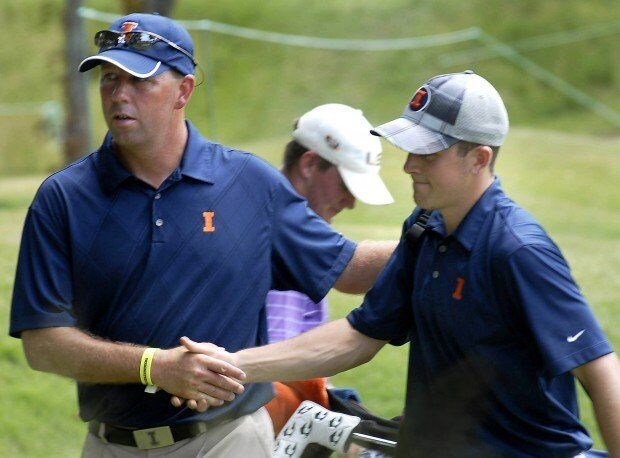 Illinois coach Mike Small, left, congratulates Scott Langley, who shot a 4-under 68 on June 3, 2010, in Chattanooga, Tenn. Langley finished at 10-under par for the tournament.