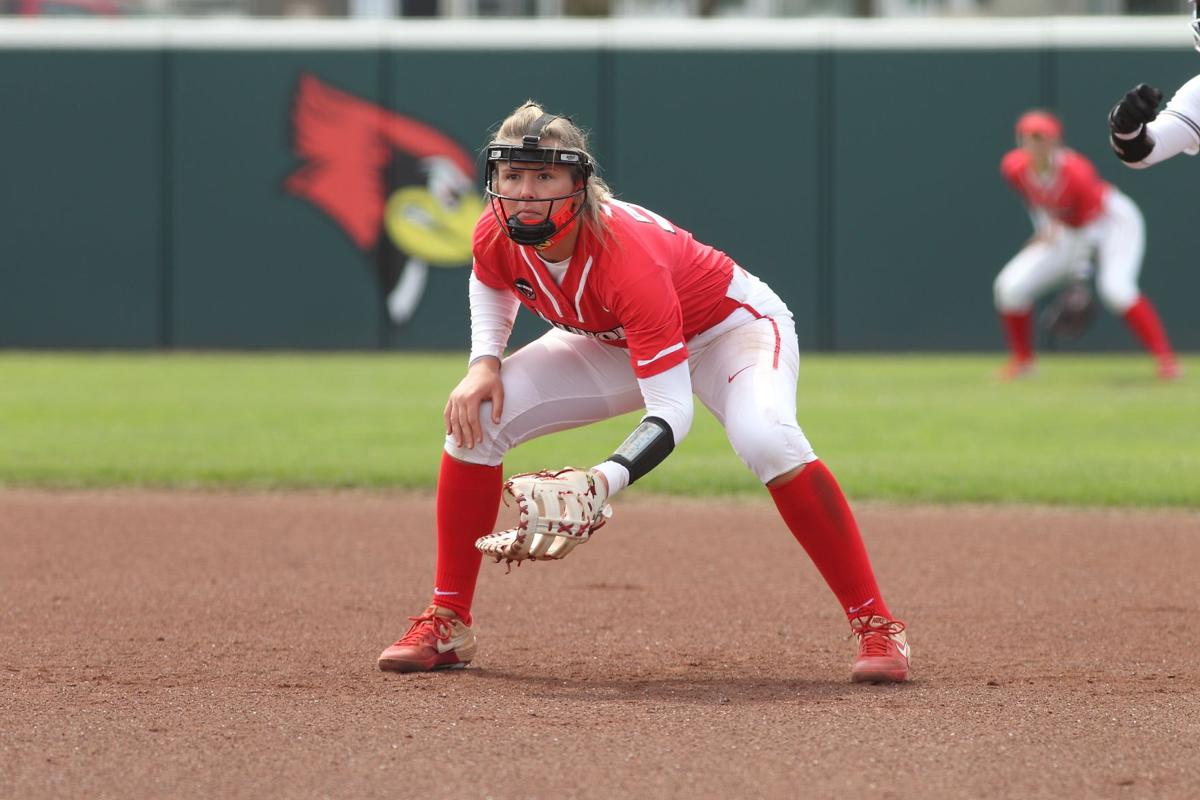 Illinois State first baseman Spenser Strandgard, a senior from Sherrard, plays defense for a Redbirds team that is off to its best start in 40 years. 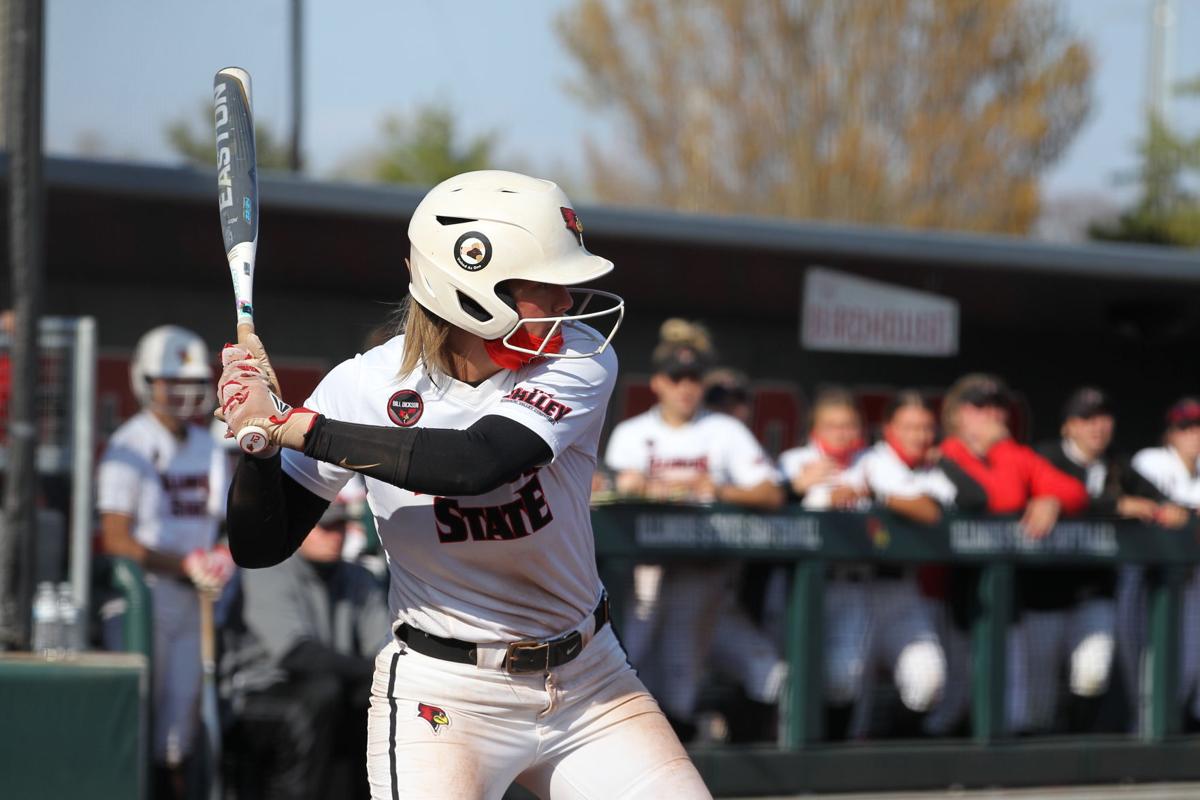 Spencer Strandgard of the Illinois State softball team prepares to hit during a recent Redbirds game. The senior, who plays first base, is currently batting .272 for the Missouri Valley Conference leaders.

Spenser Strandgard understands that the clock is ticking.

With seven regular-season games remaining in her college softball career, the Illinois State senior from Sherrard wants to make every second count.

“We talked the other day with the coaches about just enjoying the last few games we have together, playing with a smile on our faces and having fun,’’ Strandgard said. “That’s what this game is supposed to be about.’’

The Redbirds have enjoyed an abundance of fun this season, off to the program’s best start since 1981.

With wins in 19 of its last 21 games, Illinois State is 27-6 overall and currently leads the Missouri Valley Conference race with a 13-2 record.

Half of the Redbirds’ losses this season have come against nationally-ranked Clemson, Tennessee and Kentucky teams, the latter by a 5-4 score.

It’s been the type of season Strandgard believed it could be after seeing her junior year end before league play began at the onset of the COVID-19 pandemic.

“We had high expectations last year that we never had a chance to see play out, so we came into this year with a bit of chip on our shoulder,’’ Strandgard said. “We’re not taking anything for granted and I think that shows in our record.’’

Illinois State has only a handful of Missouri Valley games remaining on its schedule, traveling to Bradley for a game today before hosting the league’s third-place team, Northern Iowa, for a three-game Senior Weekend series starting Saturday.

A starter in 32 of the Redbirds’ 33 games this season, Strandgard has been a consistent contributor to Illinois State’s attack while filling the lineup spot at first base.

On a team that has been shutout just twice, she is currently fourth on the team with a .262 batting average and 16 RBI on the season.

Strandgard is one of three Quad-City area players on the Redbirds’ roster.

Strandgard’s bat has been warming in recent games. She has added to her collection of three doubles and four homers in the Redbirds’ last three games.

“I feel like I’m doing well at the plate. I started the season strong, had a home run against Kentucky, and things are coming around again after a bit of a lull, but that’s softball,’’ Strandgard said.

“I’m feeling good when I step up to the plate, feeling confident, and that is so much of it. The coaches here really keep you believing and work to keep everybody ready.’’

Strandgard has complemented that by playing a solid first base, crediting the abilities of her teammates.

“They always do a good job of hitting the target. They’re making a lot of good throws and that makes my job easy,’’ Strandgard said.

This season’s work continues a steady progression of growth for Strandgard, who saw action for Illinois State in one game as a freshman in 2018 on a team that included her sister, Riley.

She played in 10 games and totaled six at-bats as a sophomore, playing behind all-Missouri Valley Conference pick Allison Spence for a second straight season.

Strandgard moved into the lineup at first base a year ago, starting in all 20 games she played while batting .300.

“I had such a great opportunity to learn and grow my first two years, playing behind Allison Spence,’’ Strandgard said.

“I was able to watch her work and learn from how she played the game. It helped me get ready for going into places like Florida and Oklahoma and being ready to play there last year.’’

That experience also helped Strandgard adjust from the high school level, where she was a standout for Sherrard in volleyball, basketball and softball.

“All of a sudden, I found myself being a small fish in a big pond and that was different, going from several sports to one,’’ she said. “It was an adjustment, but it gave me a chance to prove that I could raise the level of my game and compete here the way I am now.’’

And now just days away from earning her undergraduate degree in environmental health with a minor in safety, Strandgard looks forward to helping the Redbirds finish off the 2021 season in style.

“To earn a Valley championship in the regular season, that would mean a lot as a senior and be a great way to end a career,’’ Strandgard said. “It would be really meaningful and to accomplish it with this team, having the fun we’re having, would be special.’’

If you have an item for possible inclusion in a future Alumni Report, contact Steve Batterson at sbatterson@qctimes.com or 563-383-2290.

The St. Ambrose lacrosse program is having its best season. The Fighting Bees play in the national tournament this week.

Illinois State first baseman Spenser Strandgard, a senior from Sherrard, plays defense for a Redbirds team that is off to its best start in 40 years.

Spencer Strandgard of the Illinois State softball team prepares to hit during a recent Redbirds game. The senior, who plays first base, is currently batting .272 for the Missouri Valley Conference leaders.