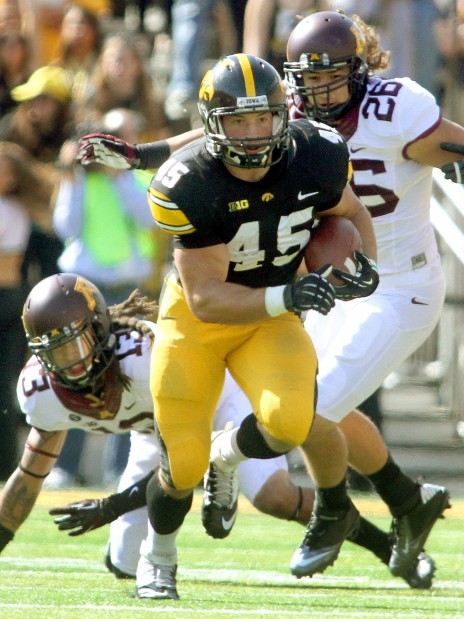 Mark Weisman wasn't much of a factor in last year's Iowa-Iowa State matchup. That figures to change Saturday in Ames. 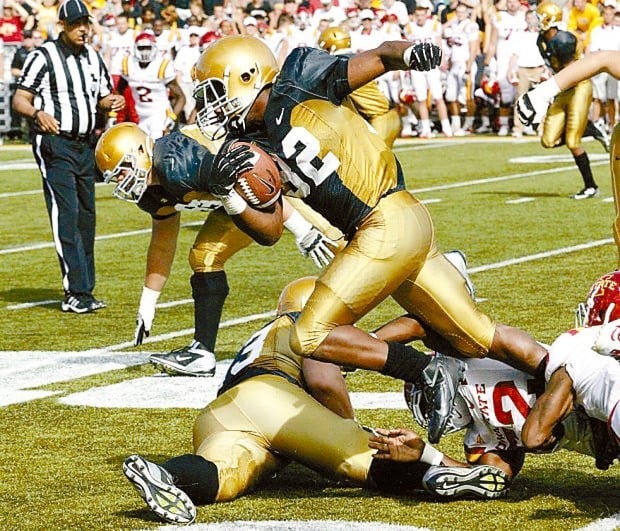 IOWA CITY – When Mark Weisman stepped to the forefront at running back last season for the Iowa football team, it was out of necessity.

Now, the Hawkeyes sophomore is trying to stand out in a crowd.

Unlike last season, when Weisman was shifted from fullback to tailback because of injuries and went on to lead Iowa with 815 rushing yards, there is no shortage of ball carriers in Iowa's camp this summer.

Damon Bullock returns, Jordan Canzeri is back after missing the 2012 season with a torn anterior cruciate ligament, and redshirt freshmen Michael Malloy and Barkley Hill are positioning to compete for playing time.

“It’s not August yet, but we feel good about the depth we have there and the potential that we have heading into fall camp," Iowa coach Kirk Ferentz said.

“When Mark had to go last year, he was basically the only guy we had back there. Hopefully, we’ll have a little more balance this year and can give him some help. It would be nice to be in a position where one guy didn’t have to shoulder the entire load."

Weisman rushed for 217 yards in his first start against Central Michigan and totaled 293 yards in Iowa’s first Big Ten tests against Minnesota and Michigan State before suffering an ankle injury.

The Hawkeyes cobbled together a running attack the rest of the year but stumbled to losses in their final six conference games to end a 4-8 season.

“It wasn’t fun for any of us, and it’s something we don’t want to go through again," Weisman said.

“It would be easy to get lost in the shuffle, and I don’t plan to let that happen," he said.

He continues to prepare to play tailback and is spending time working to gain flexibility and the ability to make more effective cuts.

Weisman, who walked on at Iowa after initially beginning his career at Air Force, said he is approaching things as he did when he arrived at Iowa.

“The mentality that I’m going into things with now isn’t any different," he said. “It’s kind of a walk-on mentality, that you have something to prove and that’s really still the case for all of us. Jobs are open. There’s plenty of competition and I’m not going to let somebody outwork me. That’s the way I approach it and I’m sure the other guys are thinking the same thing."

It’s the way Ferentz hopes that all of his running backs approach their individual work.

“As we’ve seen in the past, we can never seem to have enough running backs, and the more they push each other, the better I think they all will become," Ferentz said.

Mark Weisman wasn't much of a factor in last year's Iowa-Iowa State matchup. That figures to change Saturday in Ames.