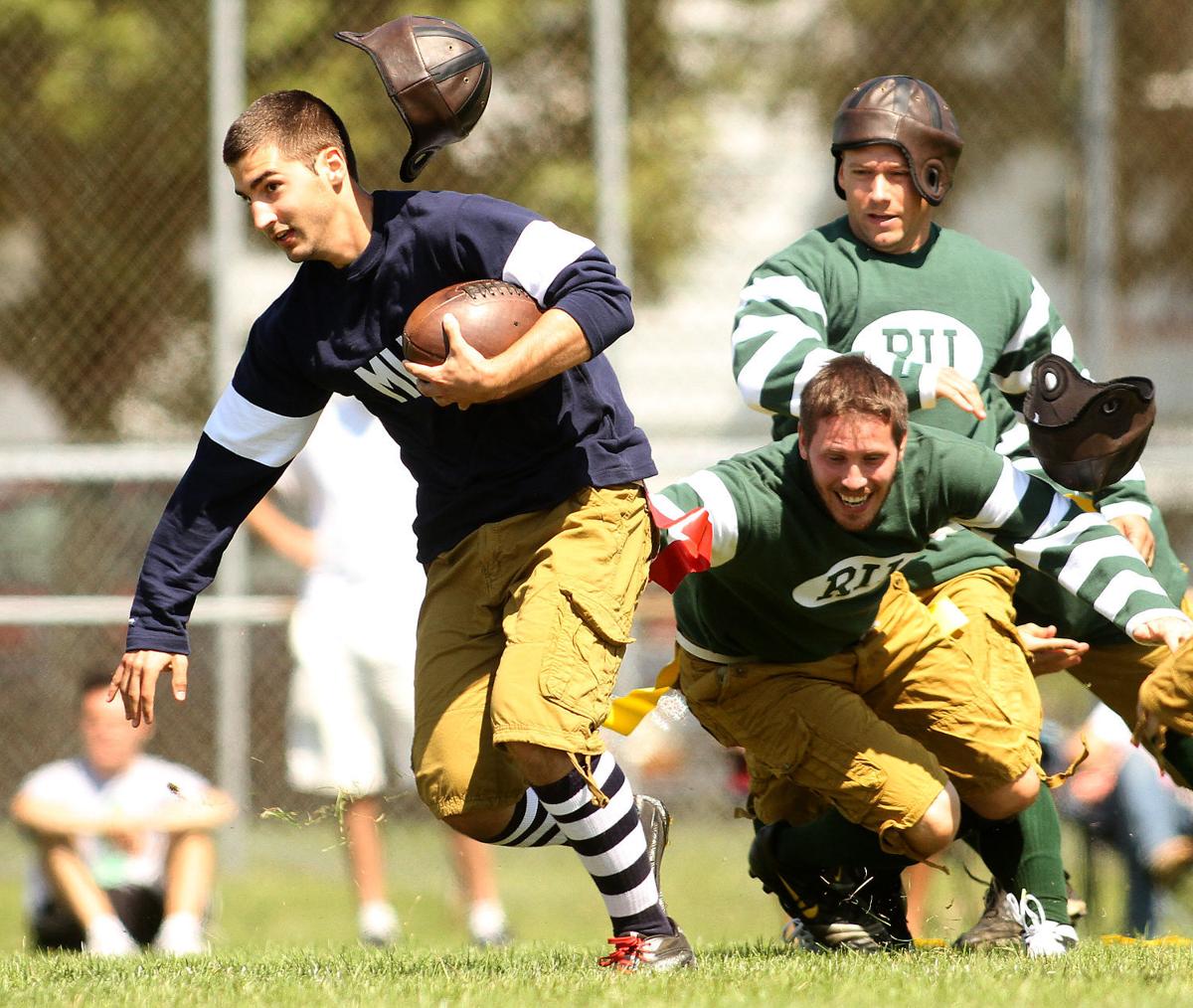 Moline Universal Tractors returner Tyler "Rookie" Richards avoids having his flag pulled by a member of the Rock Island Independents during a 1920s-era football game played Sunday at Douglas Park in Rock Island. 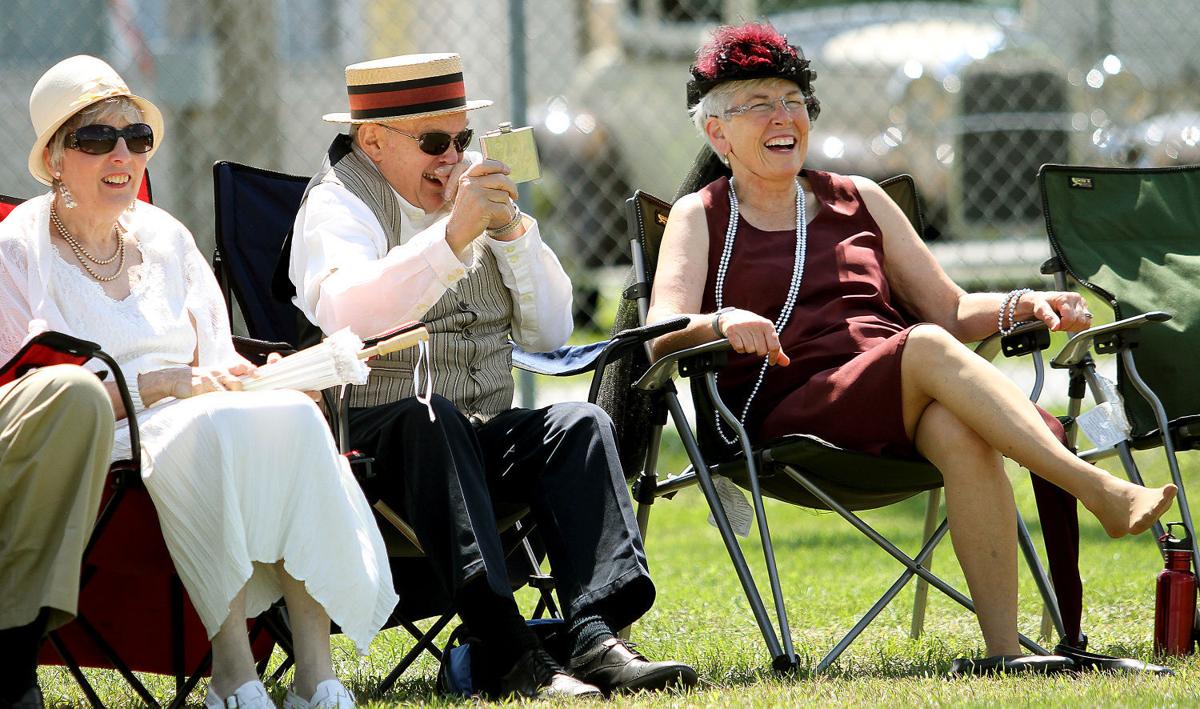 Fans got into the nostalgia of the game, too. More photos: qctimes.com/gallery. 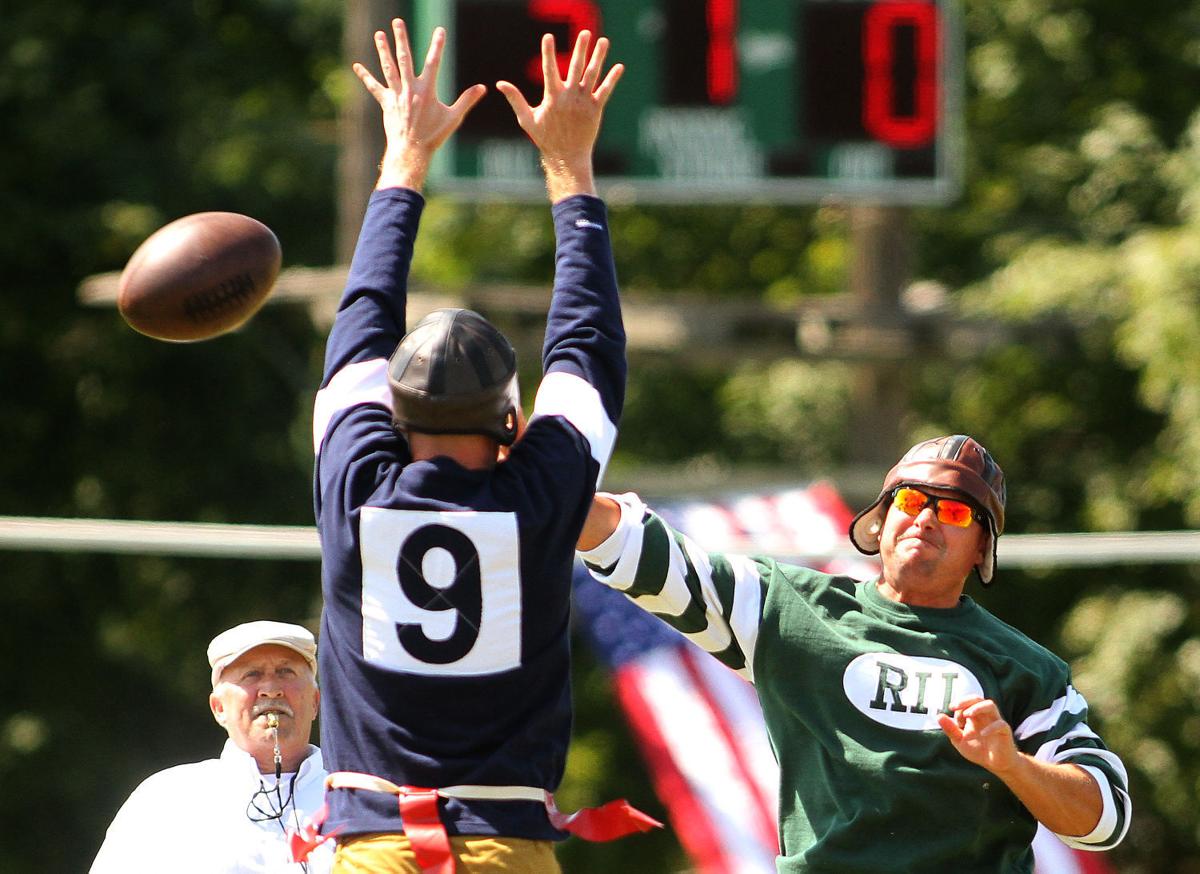 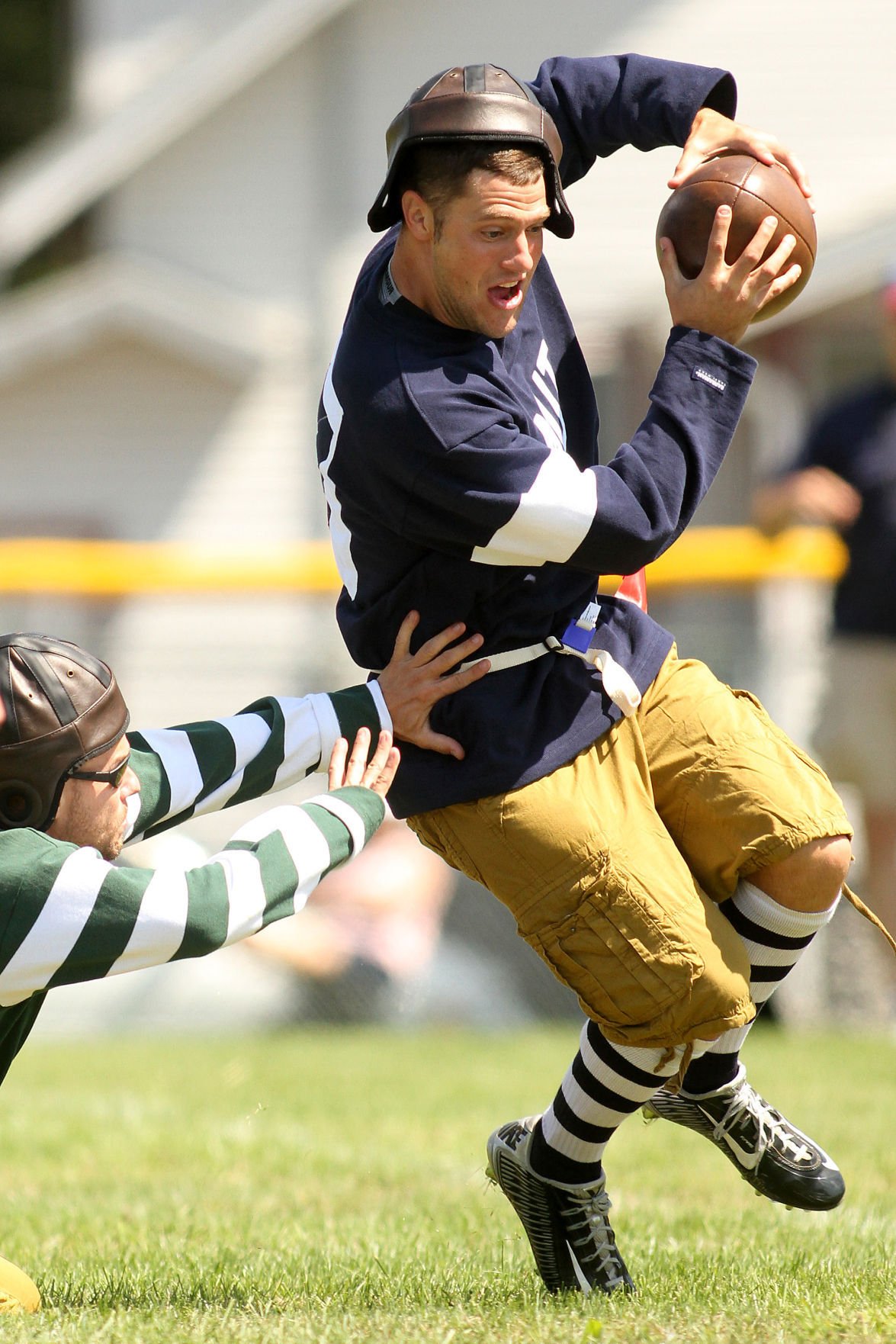 In a way, history came back to life Sunday at historic Douglas Park in Rock Island.

“It is definitely an honor to be part of it,” said Rock Island player Justin Schatteman of Silvis, a Rock Island County Sheriff's deputy when not playing tight end for the Independents.

The original Independents won what is recognized as the first game in what is now the National Football League. They beat the St. Paul Ideals, 48-0. The game has changed since those nascent days on Rock Island’s west end.

“It's (hard) getting used to the rules and how they did back in that time,” Schatteman said. “But we wanted to give them something to watch, a game, and how it was back then.”

Of course, there were cellphones snapping photos, an electric scoreboard and even television camera crews Sunday. But as much as possible, organizers tried to stay as true to the 1920s-era when both teams played on that same field.

There was the regulation ball, fatter and harder than today's football, uniforms without shoulder pads, leather helmets (hence the "leatherheads" nickname for players of that era) and all the original rules in place. Unlike the historic game, players couldn’t tackle in the exhibition and played flag football. After all, the players ranged in age from 18 to the mid-50s.

William Nelson, Rock Island Parks and Recreation director, said the idea for the game took several years to be a reality and originated with Bettendorf native Simon Herrera, now of Nashville.

“I found out Rock Island had a team in the NFL and began researching it,” Herrara said after catching two touchdown passes in the first quarter. He and co-organizer Chris Zimmerman connected online.

Zimmerman, 50, began talking with Herrera and then the two began meeting with Nelson about actually playing a game at Douglas Park.

“There is such a great football history in the Quad-Cities,” Zimmerman said. “This is a fun event to pull folks together.”

Matt Sivertsen, of Moline, played Sunday for the Tractors — and also performed the national anthem on his saxophone.

“It has been real fun to meet some people and see the community show this support for history and some national history, too.”

The Tractors got behind early Sunday, down 17-0 at half. Moline seemed to get things turned around early in the third quarter and score a touchdown. But a penalty brought the play back, and on the next play, Rock Island intercepted a pass and never let Moline into the end zone.

“It's a great family experience,” said Brooke Schatteman, Justin's wife. “It is kind of a history lesson for the kids and myself.”

The Indies, as they were called back then, played against such legendary stars as Red Grange and George Halas, who owned and played for the Decatur Staleys and later the Chicago Bears. The legendary Jim Thorpe played for a time with Rock Island.

Mike Clark of Rock Island was having a wonderful time for more than one reason — his uncle, Jerry Mansfield, played for the Rock Island team.

“I am rooting for the Independents, of course,” he said with a smile. “He never talked much about it. But he called George Halas an SOB because he was such a dirty player.”

Zimmerman and Herrera are hoping to play a second game next year at Moline's Browning Field, where the Indies played their last season in the NFL. Browning is historic in its own right and hosted pro and semi-pro football and baseball games for many years in that time period.

Douglas Park, near 18th Avenue and 10th Street, was home to the Rock Island Independents from 1907-1925. Over these 19 years, the team faced 15 different rivals from Moline.

On Sept. 26, 1920, the park hosted what is considered to be the first game to include a team from the NFL. The Independents defeated the St. Paul Ideals from Minnesota by a score of 48-0.

The park went on to host more than 35 games during Rock Island’s NFL years with more than 25 of them considered NFL games. In all, 11 Pro Football Hall of Famers and numerous All-Americans played games at Douglas Park.

Moline Universal Tractors returner Tyler "Rookie" Richards avoids having his flag pulled by a member of the Rock Island Independents during a 1920s-era football game played Sunday at Douglas Park in Rock Island.

Fans got into the nostalgia of the game, too. More photos: qctimes.com/gallery.