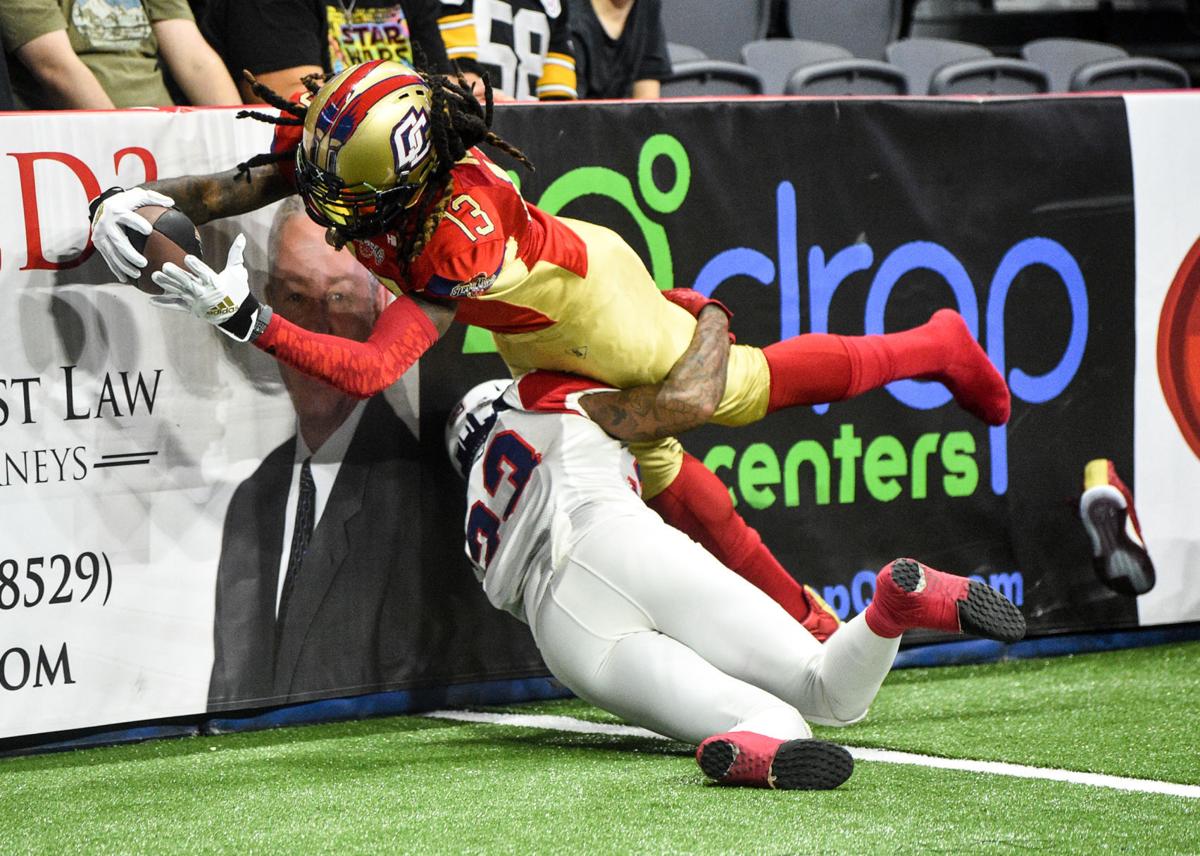 Quad City Steamwheelers receiver Keyvan Rudd loses a shoe while being tackled by the Sioux Falls Storm's Rick Rumph (23) during their game last season at the TaxSlayer Center. Holdovers Rudd and Quinton Pedroza are competing with a new group of receiver hopefuls in Wheelers camp. 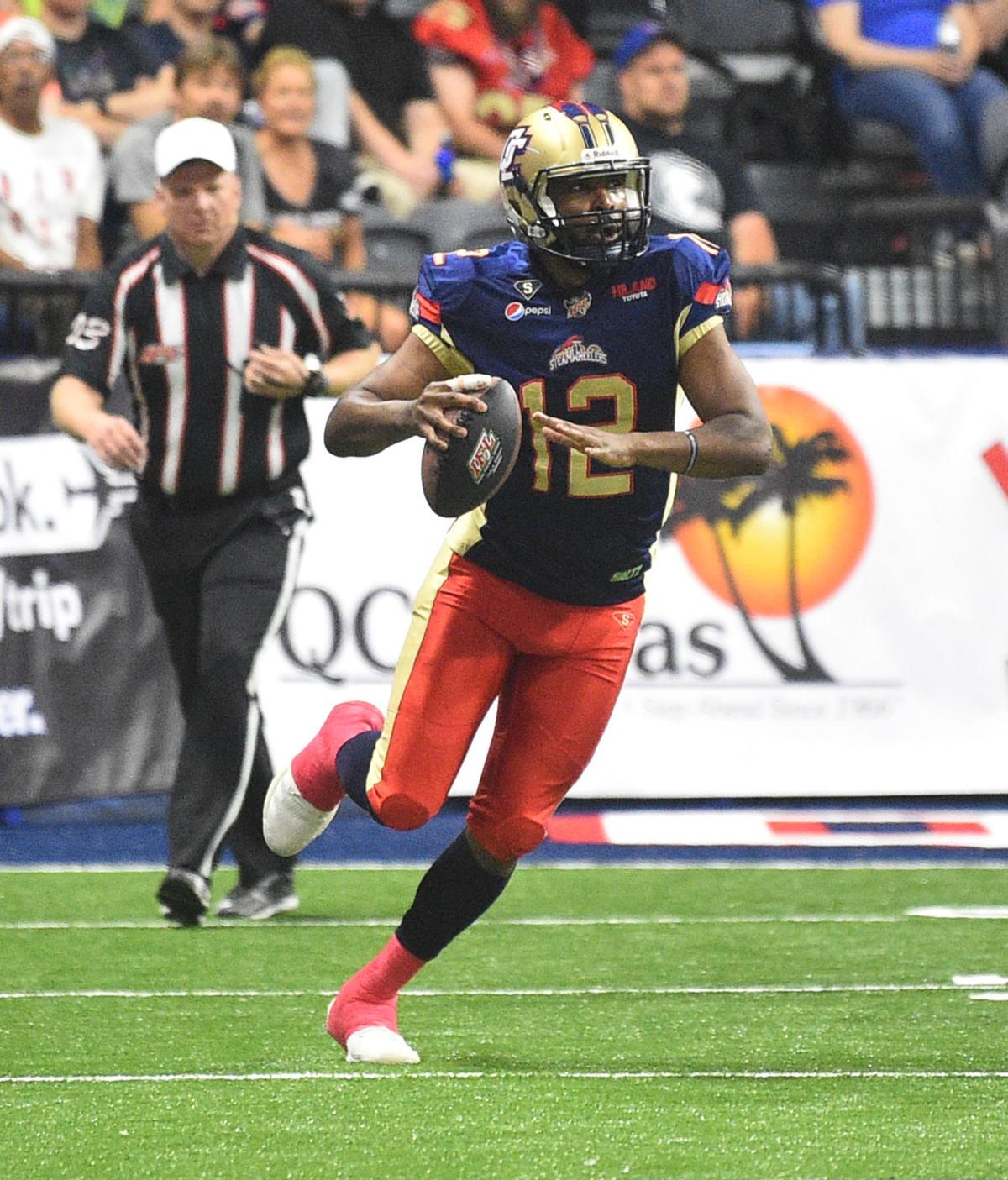 Quad City Steamwheelers quarterback E.J. Hilliard looks down field for a receiver during a 58-20 win over the Bismarck Bucks last season.

There is no question that the best thing about the Quad City Steamwheelers last season was the offense.

Some of the statistics were eye-popping. Hilliard threw for a league-high 2,739 yards and 57 touchdowns (with only three interceptions) and rushed for another 462 yards and 18 more TDs. Rudd and Pedroza each had more than 900 receiving yards and combined for 42 TD receptions. Pedroza tied for the league lead in scoring with 170 points.

"We can have the star quarterback and two star receivers, but we didn’t make the playoffs," Ross said. "So I wanted to bring in the best group of guys I could into camp and we’ll figure it out from there. I don’t want anybody getting comfortable."

Ross and the Wheelers opened camp over the weekend with some freshly imported talent to compete with both Hilliard and those veteran receivers.

JT Stokes, a wide receiver from Wingate (N.C.) University, was one of the standouts of the team’s opening practice. Tre Harvey, who Ross describes as "a hybrid type player," also looked good. Cleveland native Rashawn Dickerson also has a chance to emerge as a potent weapon.

"He’s got the quickness, but he’s so new, so raw, he’s such a rookie," Ross said. "But once he gets it, I think we’ll be able to see how explosive he really is."

The new quarterback brought in to compete with Hilliard is Caleb Lewis, a 6-foot-4 lefthander who was a two-time Florida Class 2A player of the year in high school, where he played for his father. He went to LSU as a preferred walk-on, then transferred and finished his college career as a backup at Robert Morris.

Ross loves Lewis’ intellect as well as his arm.

"He is so mentally capable of picking this up so fast," Ross said. "It’s crazy what his first day looked like."

Hilliard admitted to being completely unsatisfied himself the way the 2019 season ended despite those gaudy statistics.

"Watching film, I’ve seen a lot of things that I left out there personally, just a lot of passes I missed, a lot of throws I didn’t make that I could have made," Hilliard said.

He said he is looking forward to another season of throwing to Rudd and Pedroza, who possess exceptional size but perhaps not the pure speed of some of the newcomers.

"It’s just a matter of pulling the trigger," Hilliard said. "That’s my motto this year. Just pull the trigger, get the ball there. I trust both those guys. I know if I get the ball anywhere near them, they’ll make the play and come down with the football."

Hilliard moved back to the Quad-Cities at the start of December and has been working since then with Rudd, a former Davenport Central star who also lives here.

"I’m just trying to break some records," Hilliard said. "That’s my goal, try to break records, try to do something that’s never been done and just trust the process, trust my guys and go from there."

Ross, who is entering his third season working with Hilliard, likes what he has seen from the former Valdosta State and Florida International QB so far.

“He took over a leadership role way better than he has before,’’ Ross said. “It’s very impressive to watch how he’s working.’’

Quinton Pedroza Player of the Week

The Quad City Steamwheelers will host a preseason party for fans Sunday at Jumer’s Casino in Rock Island.

The party, scheduled for 4 to 6 p.m., is free to the general public. Fans will have an opportunity to meet and get autographs from players as well as members of the Deckmate Dancers. Season ticket holders will be able to pick up their tickets at the event.

The Steamwheelers open the Indoor Football League season March 7 on the road at Cedar Rapids. The home opener is March 21 against the Arizona Rattlers.

Photos: The Sioux Falls Storm at the Quad City Steamwheelers

Quad City Steamwheelers receiver Keyvan Rudd loses a shoe while being tackled by the Sioux Falls Storm's Rick Rumph (23) during their game last season at the TaxSlayer Center. Holdovers Rudd and Quinton Pedroza are competing with a new group of receiver hopefuls in Wheelers camp.

Quad City Steamwheelers quarterback E.J. Hilliard looks down field for a receiver during a 58-20 win over the Bismarck Bucks last season.