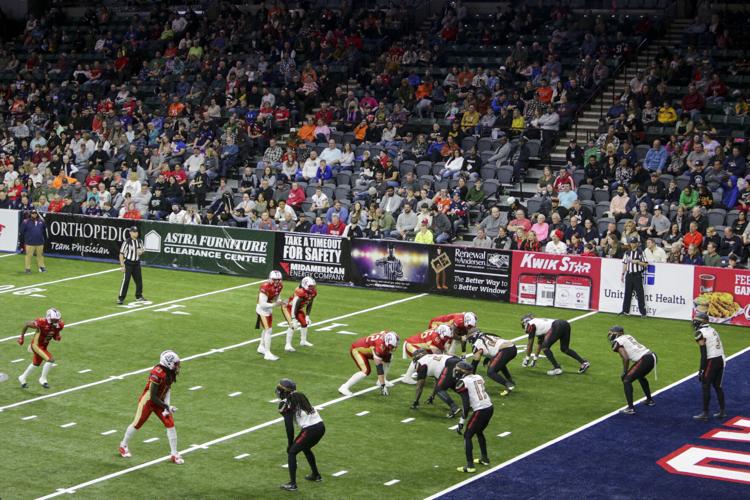 The Quad City Steamwheelers played their home opener before a nice crowd at the TaxSlayer Center earlier this month. It was QC's first home game in over two years. 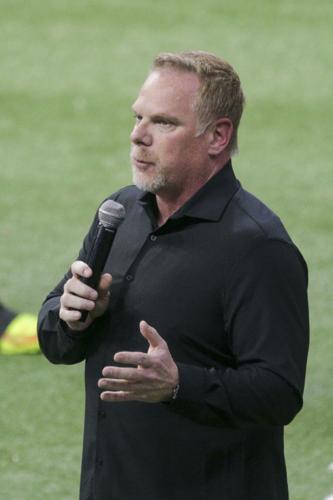 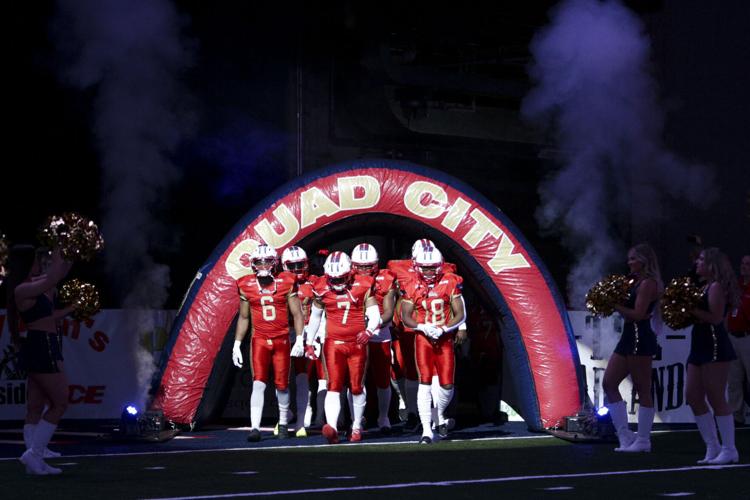 Steamwheelers' Darreon Jackson (6), Malik Duncan (7) and Jevaughn Codlin (18) walk through the tunnel with the defensive line before their home opener against the Iowa Iowa Barnstormers, Friday, March 18, 2022, at the TaxSlayer Center in Moline. 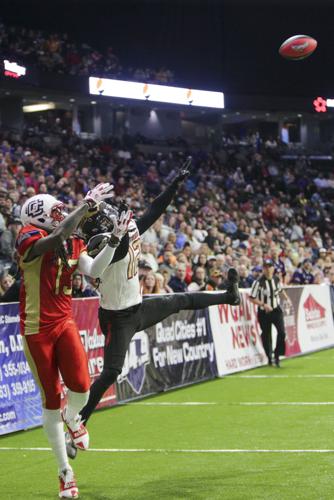 Steamwheelers wide receiver Keyvan Rudd (13) tries to get his hands on a pass from quarterback David Perkins that was picked off in the end zone by Iowa Barnstormers defensive back LeCorey Demease (12) during the fourth quarter of QC's home opener at the TaxSlayer Center earlier this month.

The Quad City Steamwheelers put together a nice team effort last Friday to beat the visiting Iowa Barnstormers in their home opener at the TaxSlayer Center.

It also took a team effort to make sure the Steamwheelers were even back in action this season.

QC was dormant in the 2021 season when the TaxSlayer Center was also shut down because of the COVID-19 pandemic. That followed a 2020 campaign that was shuttered after one road game when the coronavirus set in and began two years of issues for the arena football team and the arena in which it plays.

That left Wheelers owner Doug Bland not knowing what the future held for his Indoor Football League franchise. Seeing an enthusiastic crowd fill the lower bowl for last Friday’s victory was a good sign, he said.

“It was great,” said Bland of being back in business. “There were some dark times the last two years wondering if we were going to get back to what we once had. We just kept plugging away and hoping everything was going to work its way out. Obviously, it did and the fans came back to support it.”

A bounce-back win last Friday was a good sign for the team, which is on a bye this week before heading into next Sunday’s game in Worcester, Mass., against defending IFL champ Massachusetts.

It was also encouraging to see a boisterous crowd of 4,630 flock to downtown Moline to see indoor football action.

“It was a tough weekend with spring breaks, the NCAA March Madness was going on and it was horrible weather — cold and rainy outside — and we still had a respectable crowd,” said Bland of the first of eight home contests. “We wish it would have been more, obviously, but some people are still not wanting to come out.”

The fans who did show their support were almost left without the entertainment option, according to Bland.

A $200,000 investment from the city of Moline that Bland said came from federal grant money was the only thing that kept the lights from staying dark.

“If we wouldn’t have got the funding from the city of Moline, I would have had no other choice but to,” said Bland when asked how close he was to pulling the plug on the franchise. “There was just no way we could have been that deep in the hole and dug ourselves out.”

“The mayor (Sangeetha Rayapati) and city council in Moline did an amazing job listening to us and came through for us big time,” said Bland, noting the franchise has an economic impact of roughly $7.3 million on the region. “We probably wouldn’t be here if it wasn’t for the city and Scott Mullen.”

“We didn’t get one penny of PPP money or any of that kind of stuff,” he said. “This was the only help we got was what we got from the city.”

Bland said that the money from the city covered the payroll that was needed and expenses incurred during the two years of missed revenue with the TaxSlayer Center shuttered.

“Even though your team is shut down and you can’t play doesn’t mean you don’t have bills coming in,” he said. “We were going upside down.”

Bland said that the team had already incurred many expenses for the 2020 season — housing the players, uniforms purchased, travel expenses incurred — when the league shut down just ahead of the home opener that year.

“The finances that you spend leading up to the opening part of your season is the most money you spend all year long,” Bland said of up-front expenses. “When the season got canceled, you don’t recuperate that money. We got a little money back from the airlines because they couldn’t provide us the service. But there was a lot of money that went up in flames because we weren’t able to use that stuff.”

With such a tenuous situation and an unknown future, what kept Bland in the game?

“It’s profitable — not extensively profitable, but in 2018 and ’19 we did make money,” he said. “Without the pandemic, it’s a viable business and it’s a viable piece to the community, and that’s the most important part of it.

“Without entertainment for people to do things on the weekends, it doesn’t make it a viable market for these big companies like Genesis and Tri-City Electric and John Deere. They’re trying to acquire as much young talent to move to that market as possible. If there’s nothing for them to do once they get off work, they’re going to go elsewhere. … Without pro sports and things to do in that community, it’s not as viable a community as it could be and I realize that.”

And there is a solid fan base. Bland said that roughly 95% of his season-ticket holders from the 2020 season remained committed to the team.

There was also renewed interest after Friday’s 42-26 victory over the in-state rival Barnstormers.

“We’ve sold some season tickets even this week after Friday’s game,” said Bland. “… In all my years of business I’ve never had that happen before where after the first game people have come and said I want season tickets in these exact seats we had for the rest of the year.’”

Those little signs are a flicker of hope for the franchise remaining viable.

That and an enthusiastic owner seeking long-term success in a volatile pro sports environment.

“I grew up around there and that’s why I rolled the dice because I want this community to have things to do,” said Bland, who was originally from nearby Ottawa, Ill. “We do get a ton of support and our fans love our team.”

When the Quad City Steamwheelers seemingly needed something good to happen or someone to step up and make a big play, they got it Friday night…

The Quad City Steamwheelers will take on the Vegas Knight Hawks Friday in Henderson, Nevada.

The Quad City Steamwheelers head into their matchup with the Green Bay Blizzard Friday without a key piece of their offense, running back Kerrion Moore.

Rudd, Johnson doing so much more than playing football for Steamwheelers

Keyvan Rudd and Amos Johnson take playing football for their hometown Quad City Steamwheelers seriously. They also know it's important to be role models in the community in which they grew up.

The Quad City Steamwheelers played their home opener before a nice crowd at the TaxSlayer Center earlier this month. It was QC's first home game in over two years.

Steamwheelers' Darreon Jackson (6), Malik Duncan (7) and Jevaughn Codlin (18) walk through the tunnel with the defensive line before their home opener against the Iowa Iowa Barnstormers, Friday, March 18, 2022, at the TaxSlayer Center in Moline.

Steamwheelers wide receiver Keyvan Rudd (13) tries to get his hands on a pass from quarterback David Perkins that was picked off in the end zone by Iowa Barnstormers defensive back LeCorey Demease (12) during the fourth quarter of QC's home opener at the TaxSlayer Center earlier this month.