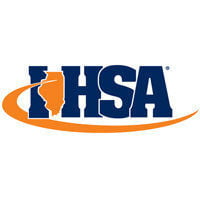 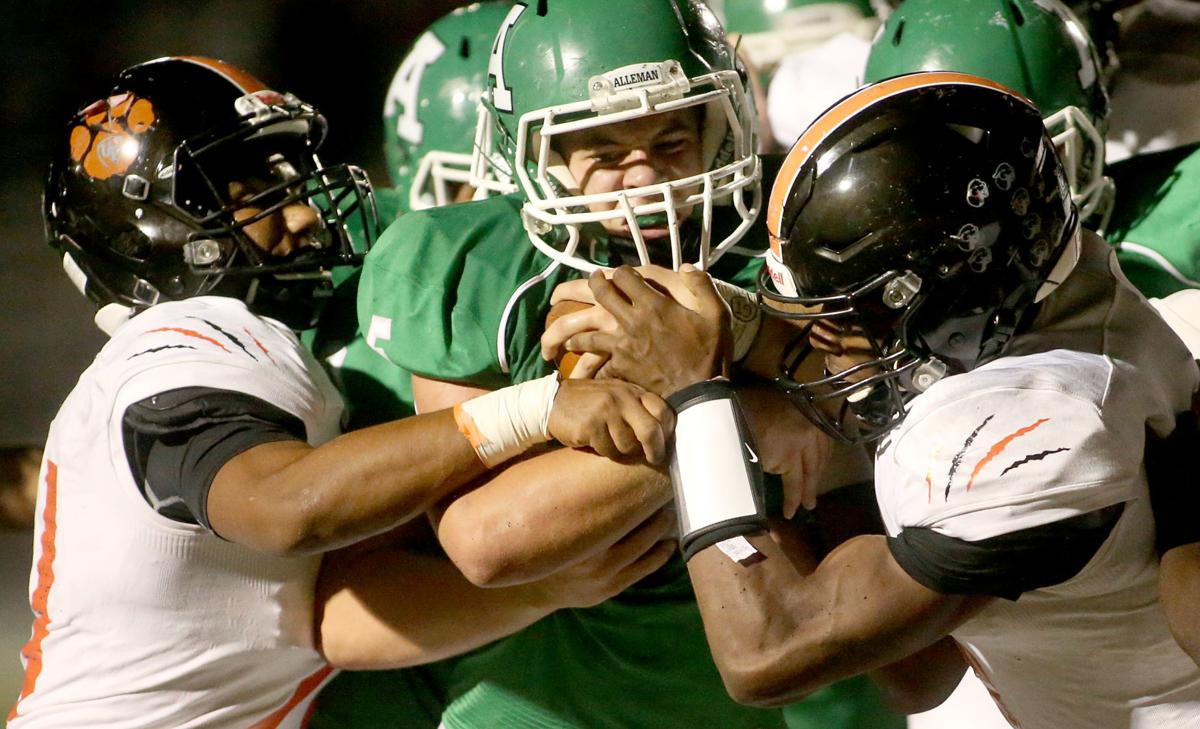 United Township's Lamont Hill, left, and Telvin Chatman tackle Rock Island Alleman's Nate Sheets during a game last season. While the IHSA has lessened some restrictions on prep sports, Illinois Gov. J.B. Pritzker reiterated Tuesday that football would not be played in the state until the spring.

A sooner-than-expected football season won’t be happening, but Illinois high school athletes will have additional competitive opportunities in upcoming months.

Although high school football teams in every state surrounding Illinois are on the field this fall, Gov. J.B. Pritzker doubled down Tuesday on his earlier mandate that precludes football, volleyball and boys soccer teams in the state’s high schools from playing this fall.

"We have the lowest positivity rate in the Midwest. Still too high. The states you are talking about all have very high positivity rates, double digits in most," Pritzker said during a news conference.

"Those are states, if they decide to endanger children and families by allowing certain contact sports to take place, that is their decision. It’s not something that is good for the families and the children of Illinois."

Acknowledging he was maintaining a "careful" approach and saying he was "not willing to sacrifice people's lives or their health," Pritzker’s comments come as a group of coaches in the state have organized rallies urging a return to competition this fall for Saturday in both Chicago and Springfield.

They also come a day after the Illinois High School Association Board of Directors changed a few limitations put in place in August because of the COVID-19 pandemic.

The IHSA board voted Monday to allow Illinois high school teams in the winter, spring and summer sports seasons to participate with normal season-game limitations.

The board also tabled consideration on whether to permit Illinois prep athletes to participate simultaneously for both school and club teams.

The biggest change impacts scheduling for teams, reversing an earlier decision that would have allowed teams no more than two scheduled competitions per week during the winter, spring and summer seasons.

The IHSA board also agreed to allow the newly defined "summer" sports season, which includes baseball, softball, boys and girls track & field, girls soccer and boys tennis, to begin two weeks earlier than previously scheduled. Those teams will now be allowed to begin practices on April 19 and competition on May 3 in a move which will lengthen the summer season that will continue to run through late June.

IHSA executive director Craig Anderson said the changes are examples of how fluid things will remain for the current school year.

"When the IHSA’s initial return to activities guidelines were established, the limitation of two contests per week felt like a constraint that would help limit exposure," Anderson said.

"Given how well our state is handling the pandemic, and the lack of setbacks in the fall sports we have conducted so far, there was a consensus that we could move forward with allowing schools to schedule winter, spring and summer sports without further restrictions."

Regional limitations on those schedules — limiting schools to competition against opponents in the same conference or Illinois Department of Public Health region — remain in place.

The IHSA board tabled the request that would have provided a one-year exemption to its rules which would have allowed for the 2020-21 school year for student-athletes to participate in school and club teams at the same time.

The request sought an exemption for participants in volleyball, soccer, baseball and softball, whose traditional club sport seasons now overlap with the rescheduled IHSA seasons.

Anderson described the discussion on the issue as "lengthy and spirited" because of the unprecedented nature of the situation.

"The board understands both sides of the argument and has heard from passionate advocates for each scenario," Anderson said. "Ultimately, concerns over safety and equity left them uncomfortable with providing an exemption to this rule."

The decision will leave some Illinois preps with a decision to make about whether to continue to participate with their school program or compete for a non-school team.

"Fundamentally, the nature and mission of the IHSA is to provide participation opportunities for all students," Anderson said. "The board agreed that if a student-athlete chooses to leave their school team for a non-school team, it simply creates an opportunity for another student to step in and fill that role."

This week’s meeting was the last for the IHSA Board President Tim McConnell. The principal at Erie High School reached his term limit after serving three different terms on the board.

With a week off following its season-opening loss, Bettendorf had time to tweak some things.

Iowa high school football teams in the Quad-Cities metro and surrounding area have been very fortunate to this point.

MAQUOKETA, Iowa — There is a moment that still rings clear with Kevin Bowman.

Showing what they have: ‘Combine’ helps Rocky players in recruiting process

In Iowa, high school football players are playing games right now, getting a chance to show what they can do on the field for any college scou…

Pleasant Valley’s football team leaned on its seniors to make the winning offensive plays in the fourth quarter Friday night. It was two sopho…

DeWITT — There was one constant that carried the North Scott football team in an adversity-filled 7-0 victory at Central DeWitt on Friday.

WEST LIBERTY — It took a couple weeks longer than expected to get going, literally, but the Maquoketa football team is ready for a season-long fight.

United Township's Lamont Hill, left, and Telvin Chatman tackle Rock Island Alleman's Nate Sheets during a game last season. While the IHSA has lessened some restrictions on prep sports, Illinois Gov. J.B. Pritzker reiterated Tuesday that football would not be played in the state until the spring.