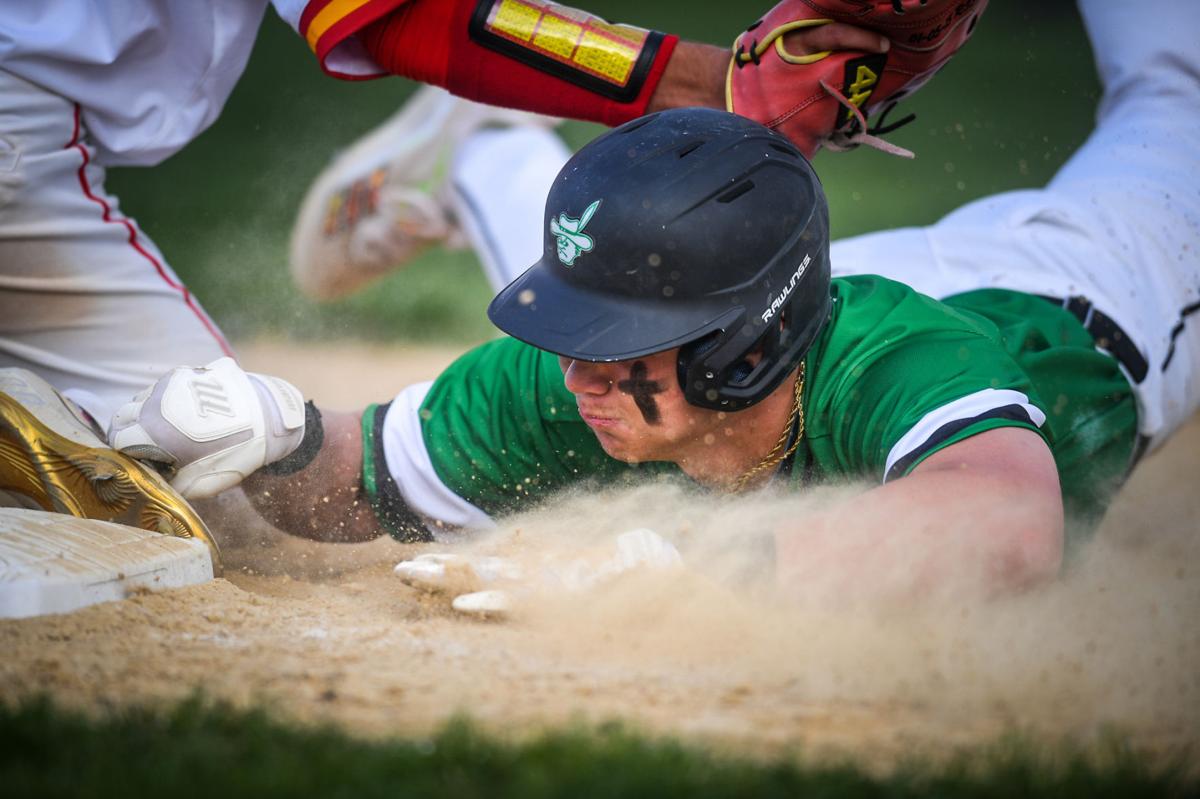 Rock Island’s Conner DiIulio tags out Alleman’s Dom Ferrari on a pickoff play at first base in the opener of Thursday's Western Big 6 Conference doubleheader at Douglas Park. The teams split the twinbill. 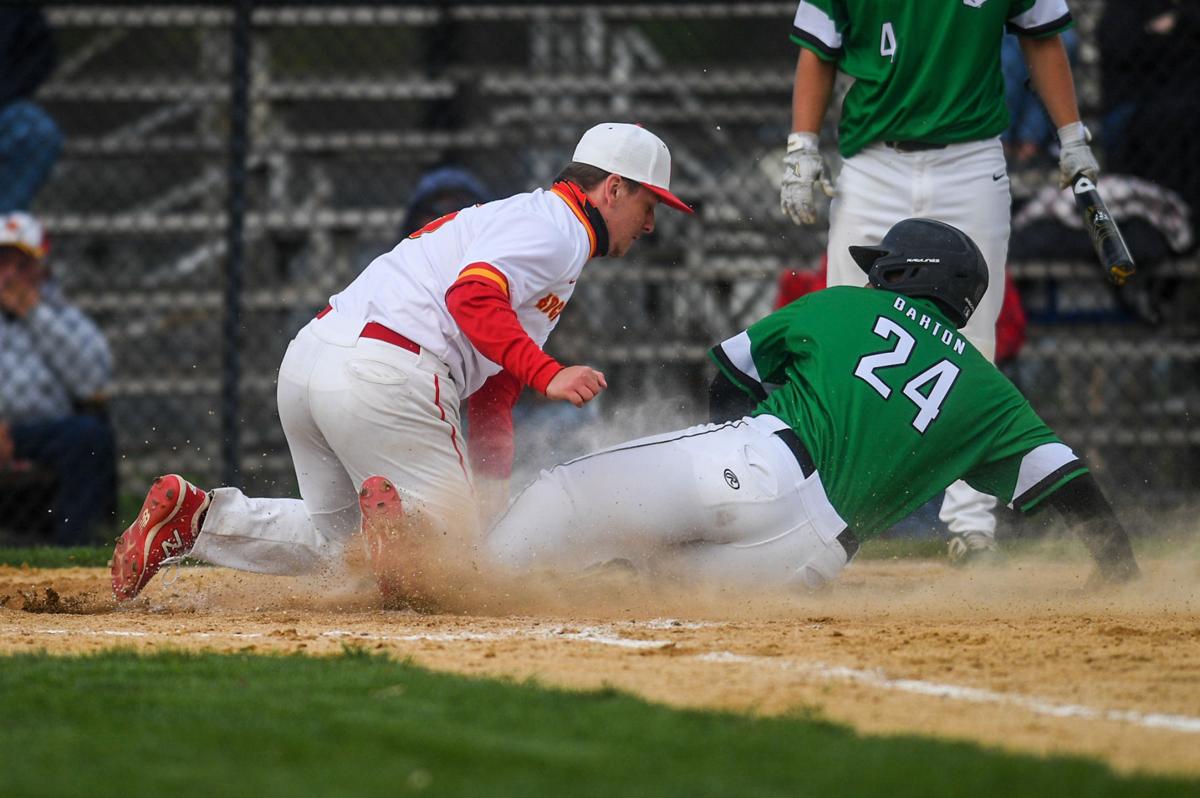 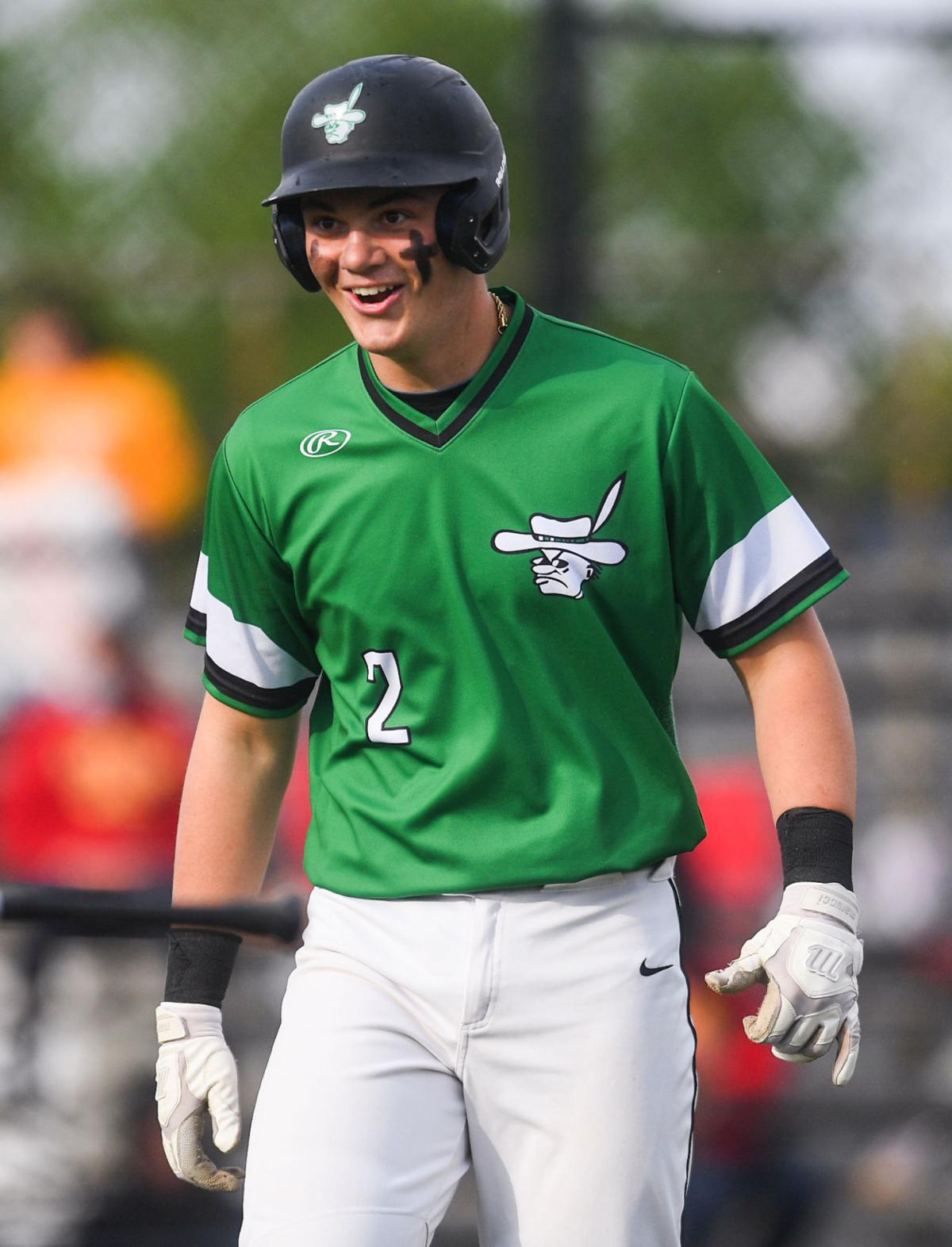 Alleman senior Dom Ferrari has plenty to smile about Thursday. His second-inning grand slam powered the Pioneers to a 14-3 victory in the opener of the Western Big 6 Conference baseball doubleheader over cross-town rival Rock Island at Douglas Park. Rocky won the nightcap 7-6.

The guys who made the game-changing plays in Thursday’s Western Big 6 Conference baseball doubleheader split between cross-town rivals Alleman and Rock Island were about as divergent as the games themselves.

Alleman senior Dom Ferrari, a four-year varsity player and the heart of the Pioneers, ripped a grand slam in the opening game at Douglas Park and drove in five runs as the Pioneers took the opener 14-3 in five innings.

In the nightcap, it was untested freshman Conner DiIulio who saved the Rocks’ rawhide in the seventh inning and allowed the hosts to forge a split with a harrowing 7-6 victory.

Nursing a 7-5 lead going into the top of the seventh, the Pioneers kept battling late, chipping into what had been a 6-1 Rocky lead through five innings.

With runners on first and second with two outs in the seventh, senior Jackson Marx lined a shot that ate up Rock Island second baseman Colton Sigel and skipped into right field. Ferrari, who singled to open the inning, easily scored on the play from second. Noah Schneider, who reached on a one-out single, took an aggressive approach on the base paths and tried to get to third.

But DiIulio came up with a perfect throw to Rocky third baseman Tyler Hansen, who put the tag on Schneider to end the game and ignite a victory celebration.

“That was a big-time play by our freshman in right field,” said Rocky coach Jake Scudder. “He goes out here and goes about his business and has no fear. He kind of saved us in the bottom of the seventh. He’s been real good for us out there all year.”

And even Alleman coach Jerry Burkhead had to tip his black cap to the freshman.

“Our MO on the basepaths is aggressiveness, no matter what,” said Burkhead. “We take balls in the dirt and advance; we’re always looking to get that extra base in high-school baseball. We always say we’ll make a 17-year-old kid make a perfect throw, and he did that. Credit to them, that was a nice play. We’re not going to change; we’d do the same thing again.”

While the games were different in so many ways, they were also similar as the team that played the cleanest ended up with the victory.

In the opener, the Pioneers (6-1, 3-2 Big 6) took advantage of eight walks, three hit batters and three Rocky errors to score seven unearned runs. Alleman’s first two runs in the top of the first both scored on Julian Harris (3-2) wild pitches. Another run also scored on a wild pitch in a 7-run third inning when Harris was knocked from the contest.

“Dom’s a four-year guy for us,” said Burkhead. “You get a chance in a Big 6 game to have him have the bases loaded … let’s just say we weren’t surprised by the result. We expect that out of him and he delivered."

“We had a fantastic approach at the plate in Game 1; we got good counts and we drove the baseball,” said Burkhead. “Early on in Game 2, we hit some balls hard right at people. That’s baseball. If those go through and we could have gotten up three or four nothing, Game 2 could have been different.”

And it wouldn’t have taken much to have changed that game, either. Rocky junior centerfielder AJ Freeman made a spectacular catch on a ball ripped by Alleman leadoff batter Zach Carpita that saved at least two runs in the second.

The Rocks took advantage of some Alleman miscues in a 5-run fourth inning that derailed losing pitcher Payton Barton (0-2), who drove in two runs in the opener. Mateo Pena capped that big frame with a two-run single after DiIulio and Sigel drove in runs.

“We’ve been kind of in a rut the last week or so,” said Scudder, happy to see his team rebound from the opening setback. “When (our pitchers) can’t get in the strike zone, we tend to struggle a little on defense and we get complacent out there and get on your heels.”

The Rocks (11-5, 2-3 Big 6) received a nice start in the nightcap from Dylan Martin (3-1) and solid relief work from Brycen McGarry, who pitched the final 1.2 innings.

“I’m real proud of our guys to fight at the end and give ourselves a chance,” said Burkhead of his team’s seventh-inning rally. “It shows the kind of grit this team has. … We’re leaving here very optimistic about our team.”

Eli Merrick delivered his second walk-off hit of the postseason Wednesday, sending Annawan-Wethersfield into an Illinois Class 1A sectional baseball final with a 5-3 win over Delavan.

Geneseo baseball out to continue out-playing its seeding

Geneseo baseball set out to prove they were better than a fifth seed when the postseason began and did so with a pair of wins to reach the sectional semifinals.

Davenport Assumption and North Scott broke out the bats Thursday, combining for 44 hits as they split a Mississippi Athletic Conference baseball doubleheader.

Rock Island’s Conner DiIulio tags out Alleman’s Dom Ferrari on a pickoff play at first base in the opener of Thursday's Western Big 6 Conference doubleheader at Douglas Park. The teams split the twinbill.

Alleman senior Dom Ferrari has plenty to smile about Thursday. His second-inning grand slam powered the Pioneers to a 14-3 victory in the opener of the Western Big 6 Conference baseball doubleheader over cross-town rival Rock Island at Douglas Park. Rocky won the nightcap 7-6.