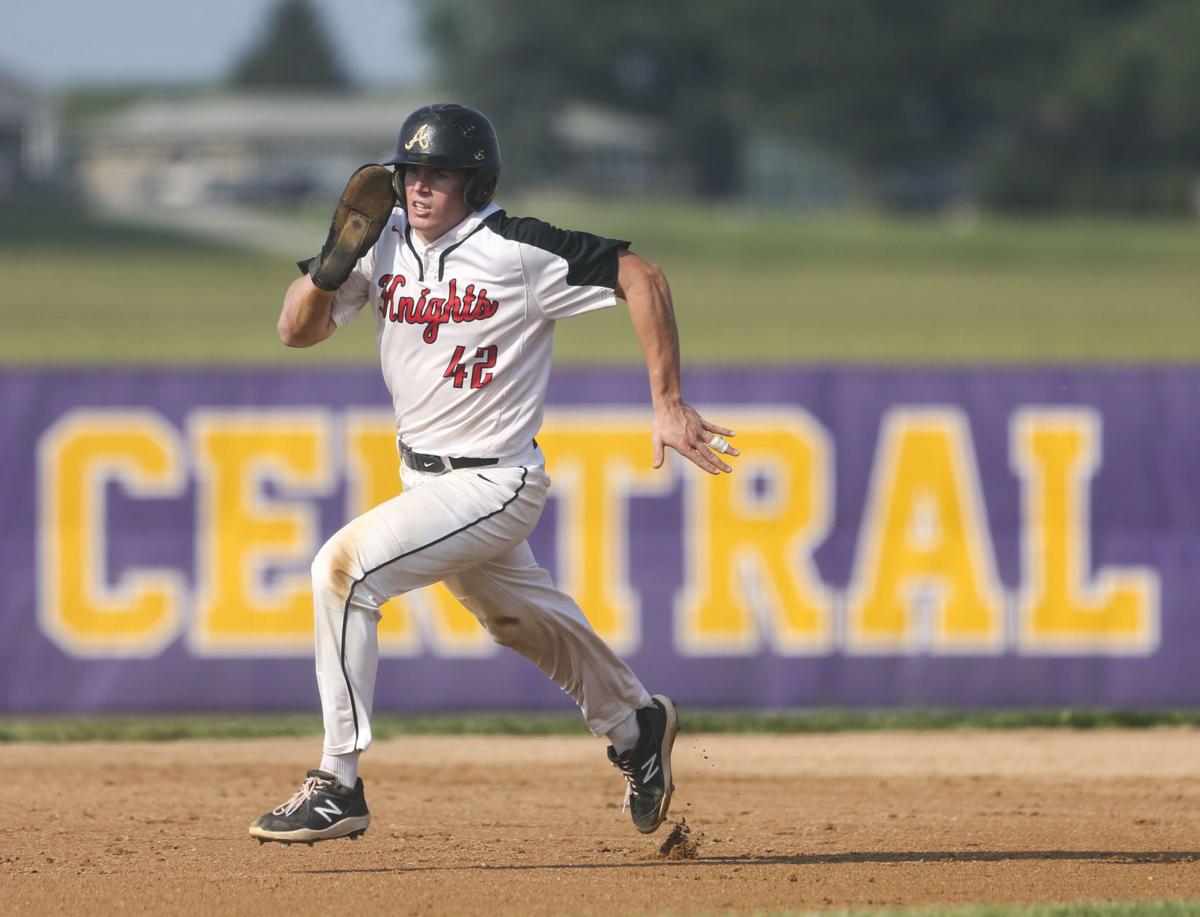 Assumption's Johnny Argo (42) rounds second base on his way to third while playing against Keokuk at Central DeWitt High School on Friday. Argo was 2-for-3 and scored three runs in the Knights' 7-3 victory. 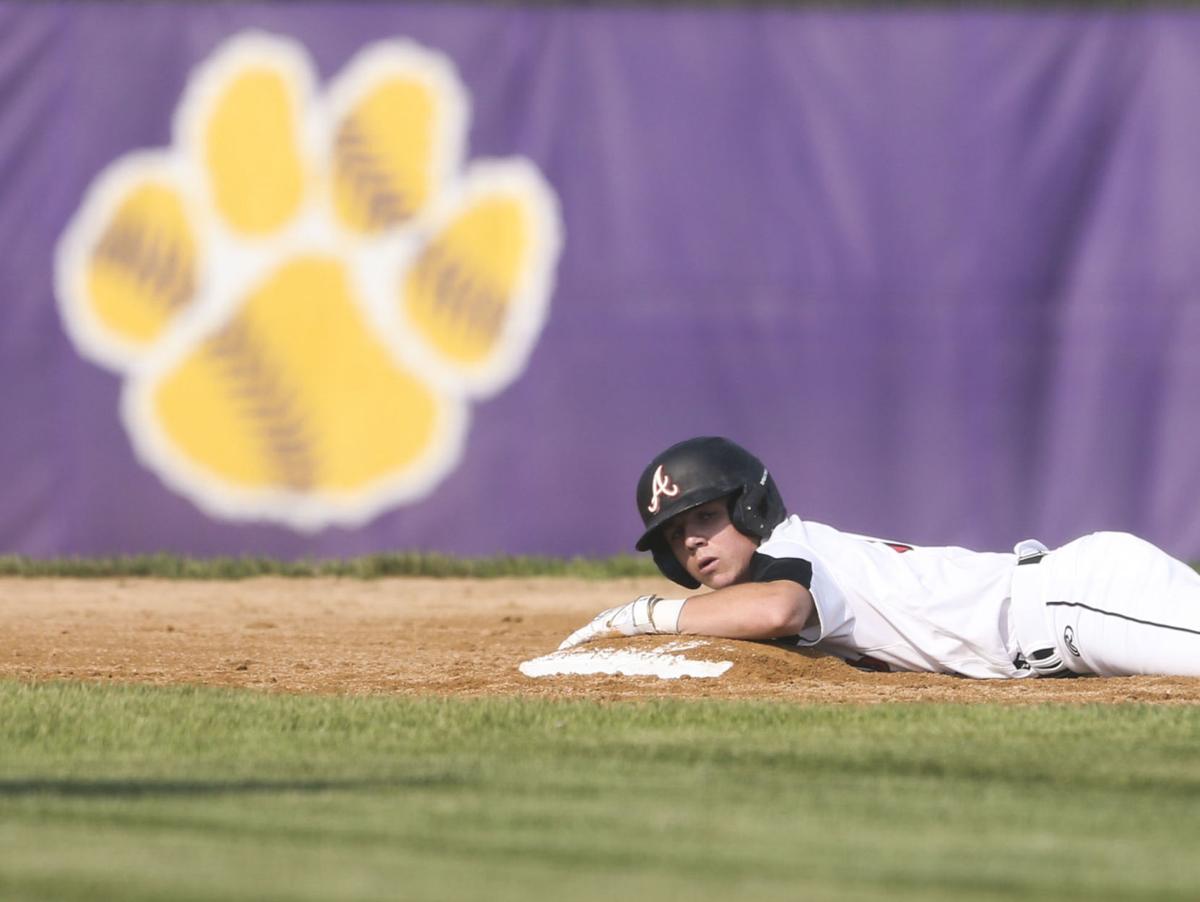 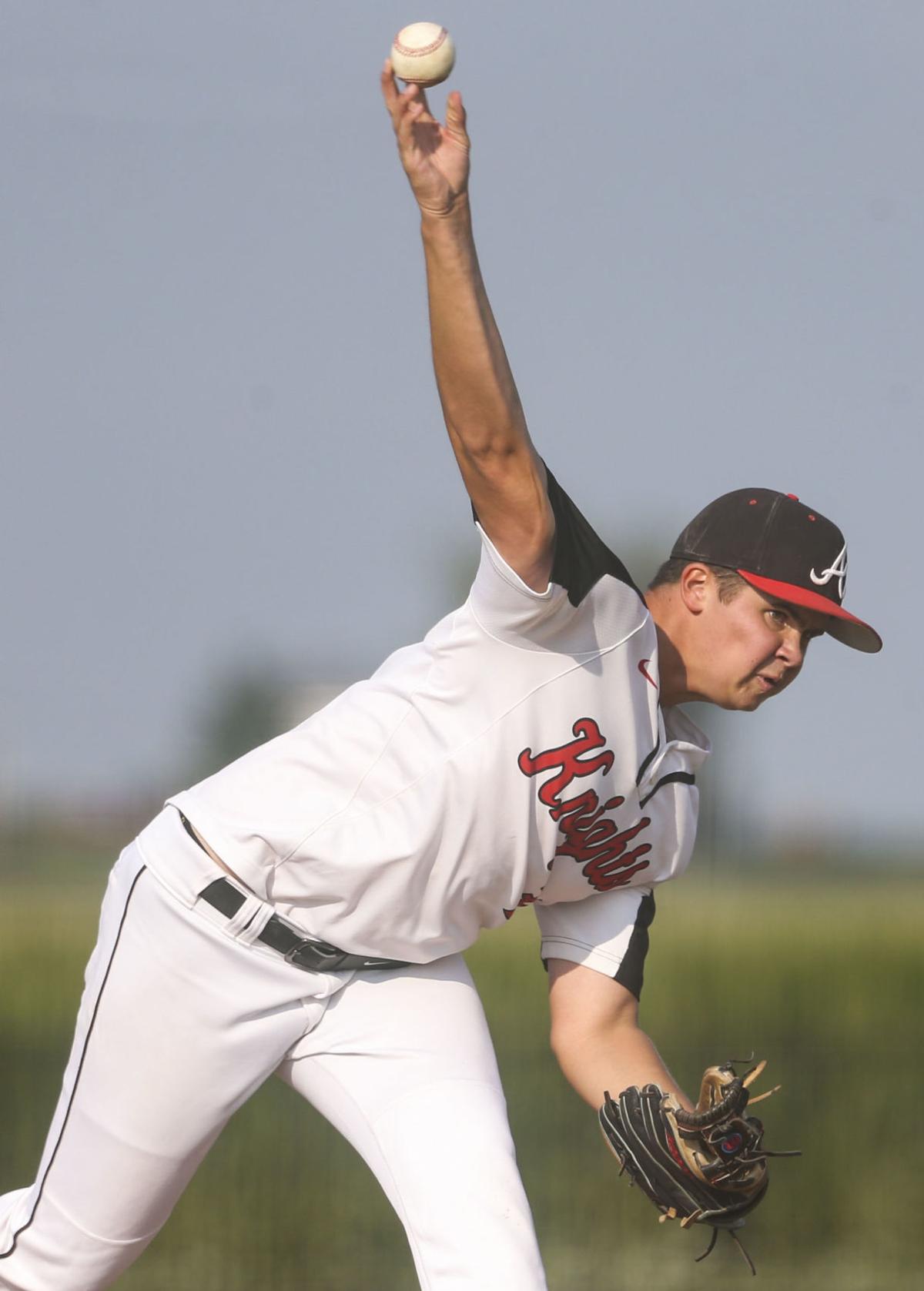 Assumption's Tyler Welch (34) fires a pitch during Friday night's game against Keokuk in DeWitt. Welch worked five innings and struck out nine to record the win.

DEWITT — In many ways, this is a Davenport Assumption baseball team its fans are not accustomed to watching.

The Knights don’t have any seniors in their starting lineup. They don’t have the explosive bat in the middle of their order or the big power arm on their pitching staff.

Instead, a team heavy on sophomores and juniors has had to lean on creating runs with precision and speed. It has relied on defense and piecing together a pitching staff this summer.

“We know we’re not going to hit triples off the wall like (former Knight) Seth Adrian,” first baseman John Argo said following Friday night’s 7-3 win over Keokuk in a Class 3A substate quarterfinal at DeWitt High School. “It is small ball, hit the ball hard and run fast.”

Assumption had a dozen hits, 10 of them singles, in its opening round tournament conquest. Max Stein, Roderick Tanamor, Alex Good, Noah Mack and No. 9 hitter John Argo each had two hits. The Knights (24-13) stole two bases, had four sacrifices and scored in five of the six innings.

“We don’t have a lot of guys that pound the ball around the yard like we have had in the past,” coach Greg Thissen said. “Then you come in here, a nice breeze coming in from center field, the grass is really thick and the guy throwing is below the speed we’re used to, we knew early on we weren’t going to pound the ball all over the yard.

“I thought we swung at strikes and moved the ball around when we had guys on base.”

The Knights advance to a substate semifinal against Clear Creek Amana (16-16), a 4-1 winner over Washington, on Monday night. CCA knocked Assumption out of the postseason a season ago.

Given Keokuk came in 4-29, the result wasn’t overly convincing for the top-seeded team in the substate. None of that mattered to them afterward.

“It was a good wake-up call to get ready,” pitcher Tyler Welch said. “I think it helped us a lot to know every game you’ve got to come out here and play your best.”

Still, it was enough to get the job done.

“I was happy with myself getting first-pitch strikes and being able to attack the batters,” Welch said. “I had trouble with that earlier in the year. It felt good today.”

The sophomore did labor a bit in the fifth, with Keokuk’s Blake Chase and Jordan Sisk registering run-scoring singles to whittle Assumption’s lead to 4-2.

Assumption tacked on three runs in the sixth thanks to RBIs from Tanamor, Good and Mack.

It turned out to be critical as Keokuk scored a run and loaded the bases in the seventh off Mack before No. 3 hitter Miller Giesler launched a deep fly ball that was caught in center by Good to end the game.

Other than Welch, who threw 80-plus pitches in five innings, the rest of Assumption’s staff is available for Monday’s contest.

“We’ve got a good group here,” Thissen said. “It is a very balanced lineup, a lot of team speed and guys that handle the bat well in situations.

“I truly believe we’ve got a run in us.”

Assumption's Johnny Argo (42) rounds second base on his way to third while playing against Keokuk at Central DeWitt High School on Friday. Argo was 2-for-3 and scored three runs in the Knights' 7-3 victory.

Assumption's Tyler Welch (34) fires a pitch during Friday night's game against Keokuk in DeWitt. Welch worked five innings and struck out nine to record the win.