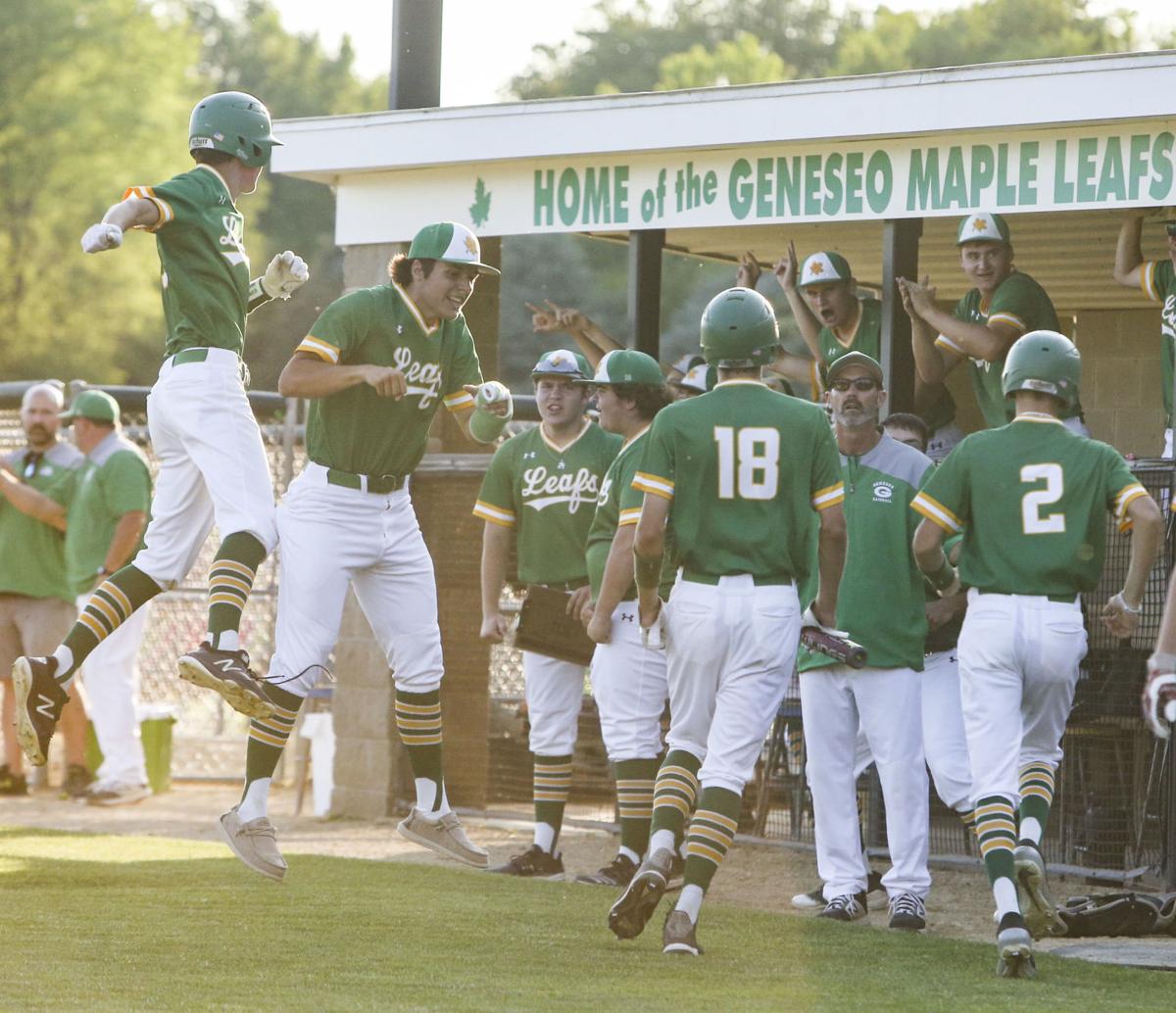 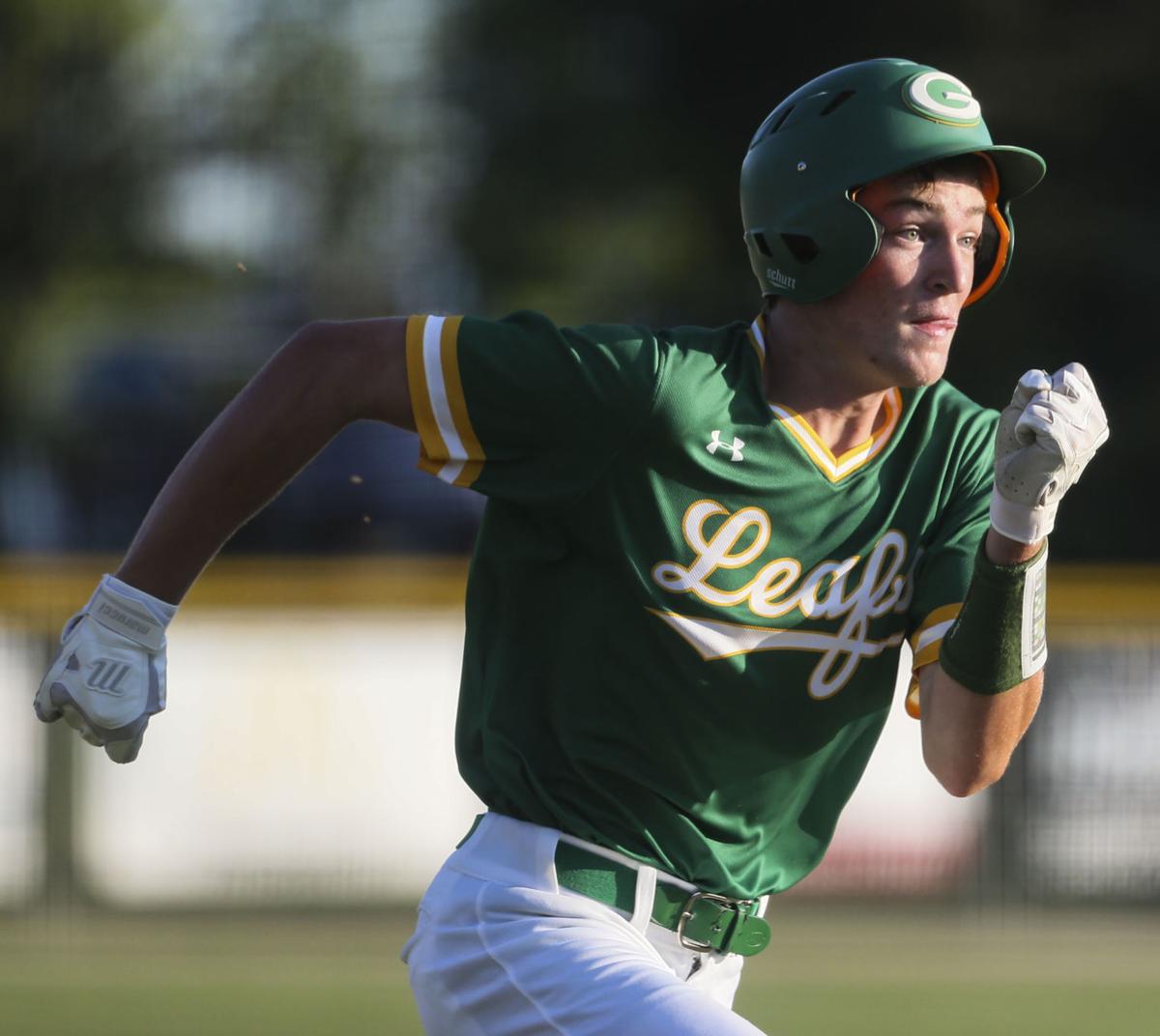 Geneseo's Jaden Weinzierl (8) rounds third and sprints for home in the Maple Leafs' 8-2 victory over Hampshire on Wednesday.

Led by 11 seniors, the Geneseo baseball team had no doubt it could make a deep postseason run.

The Maple Leafs continue to prove their postseason wins are no upsets.

Fifth-seeded Geneseo beat third-seeded Hampshire 8-2 in Wednesday’s Class 3A sectional semifinal at Stone Field at Richmond Hill Park, the Leafs third straight win over a team seeded higher than it.

Geneseo (19-10) advanced to play another home game Friday against second-seeded Dixon as the Leafs earned another crack at winning their first sectional title. Geneseo also reached the Sweet 16 in 2015 and ‘17.

Thomas Henson put Geneseo up 1-0 with an RBI single in the first inning in a game that was tight through three innings. Whip-Purrs starting pitcher Matt Karbowski retired eight straight Leafs before Geneseo broke things open with two outs in the fourth inning.

Geneseo senior PJ Moser’s three-run double was the decisive blow that put the Leafs up 7-0 as they batted around in the fourth. Hampshire finished the year 18-17.

“We’ve been playing a long time and we’re all pretty close-knit with each other,” said Moser, who also pitched a scoreless sixth inning in relief. “We gel with each other and that’s what’s carrying us. Just keep riding the wave, that’s what we’ve got to do.”

Geneseo starting pitcher Charlie Rice admitted he did not have his best command on Wednesday, but he and his defense battled through muggy conditions to shut out the Whips through six innings.

Rice said the humid conditions were not fun and getting a grip on the baseball was tough. He scattered five hits and three walks through five innings and struck out five to earn the win. Geneseo was out-hit 9-6 in the victory.

“I didn’t have my best stuff tonight, but the defense played well and we got out of jams when we needed to,” Rice said.

Breaking the game open in the fourth helped the calm Leafs cruise from that point forward.

“That was everything,” Rice said. “I knew after that I just had to go out there and throw strikes and we’d be perfectly fine.”

“That’s a senior not wanting to be done,” Nichols said. “He just competed like crazy and did what he had to do.”

After last season was cancelled amid the COVID-19 pandemic, the senior leadership has been key to this year’s postseason surge. Geneseo tied for fourth in the Western Big 6 Conference this year.

“This team is the closest team I’ve ever been on,” Rice said. “We have a lot of fun together and we’re just using that as energy when we get on the field.”

“They’re baseball guys,” Nichols said of his team. “They figure out ways to win, and quite frankly, we’ve been getting better as the year goes on. … I felt like tonight might have been the best game we’ve played all year. And that’s our goal, is to keep playing our best game. I think that’s huge.”

Nichols pointed to Mitch Wirth’s performance at third base as one that stood out.

“He made one play in the sixth that surprised our first baseman, he wasn’t even on the bag,” Nichols said.

The confident Leafs plan to keep the same approach as they take on an old rival in the NIB-12 and NCIC.

“Just play baseball,” Moser said. “We don’t have any pressure, we’re the five seed. We knew we could make a deep run, we’ve been saying it a while. We have the seniors, we have the experience, we’ve got the pitching, we’ve got the hitting, we can do it all. We know what can happen and we believe it can happen.”

Eli Merrick delivered his second walk-off hit of the postseason Wednesday, sending Annawan-Wethersfield into an Illinois Class 1A sectional baseball final with a 5-3 win over Delavan.

Geneseo baseball out to continue out-playing its seeding

Geneseo baseball set out to prove they were better than a fifth seed when the postseason began and did so with a pair of wins to reach the sectional semifinals.

Davenport Assumption and North Scott broke out the bats Thursday, combining for 44 hits as they split a Mississippi Athletic Conference baseball doubleheader.

Geneseo's Jaden Weinzierl (8) rounds third and sprints for home in the Maple Leafs' 8-2 victory over Hampshire on Wednesday.