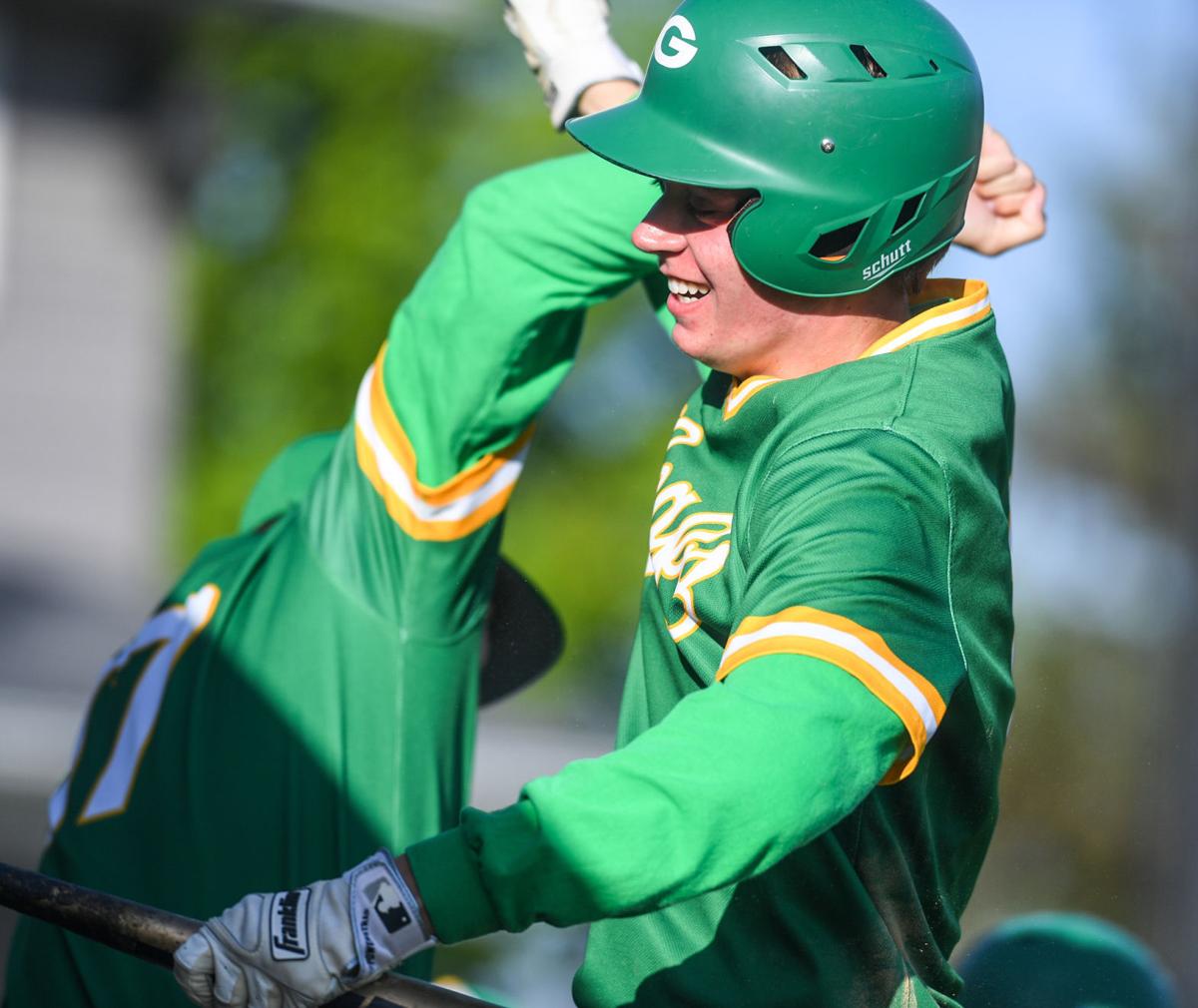 Geneseo’s Charles Rice (14) celebrates scoring a run against Quincy during their game at Richmond Hill Park on Friday in Geneseo. 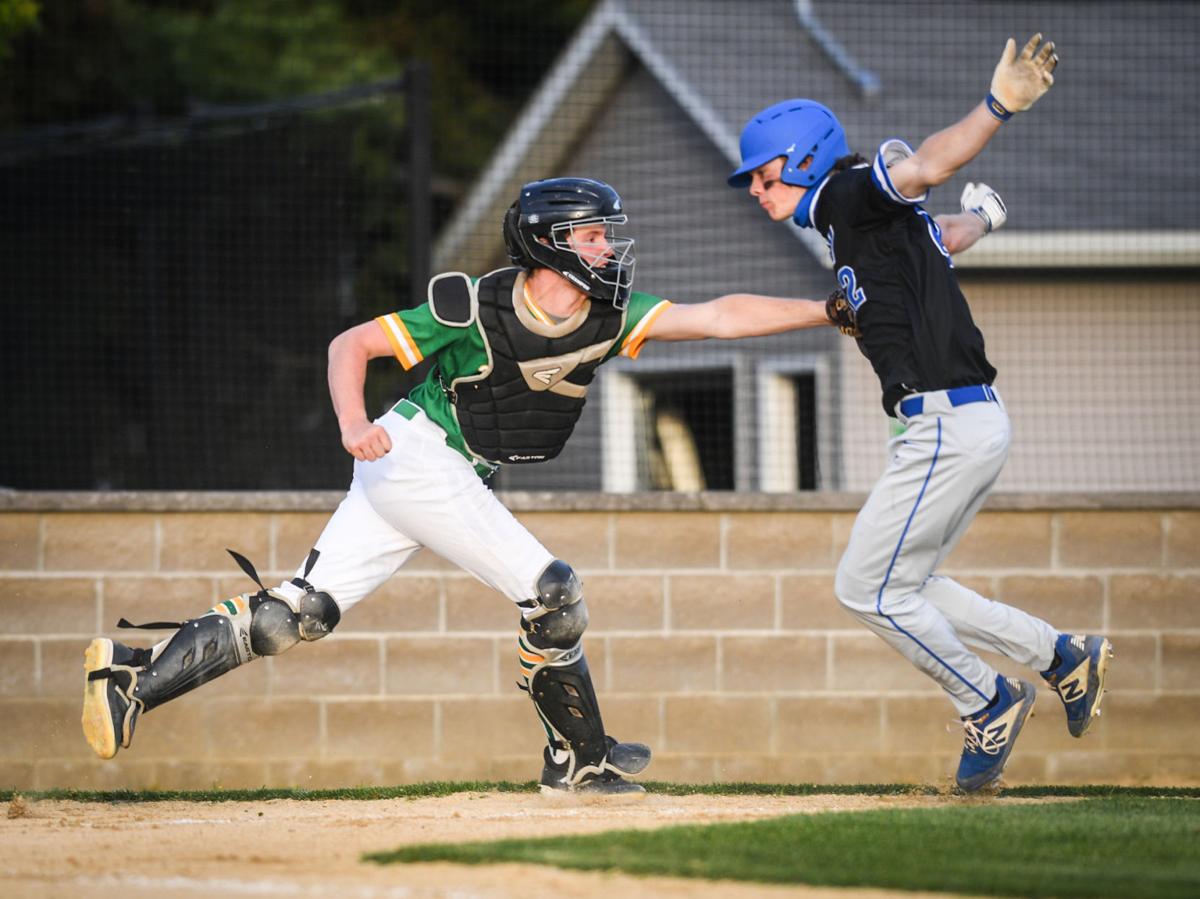 Geneseo’s Nathan Beneke tags out Quincy’s Brady Walker at home plate during their game at Richmond Hill Park on Friday in Geneseo. 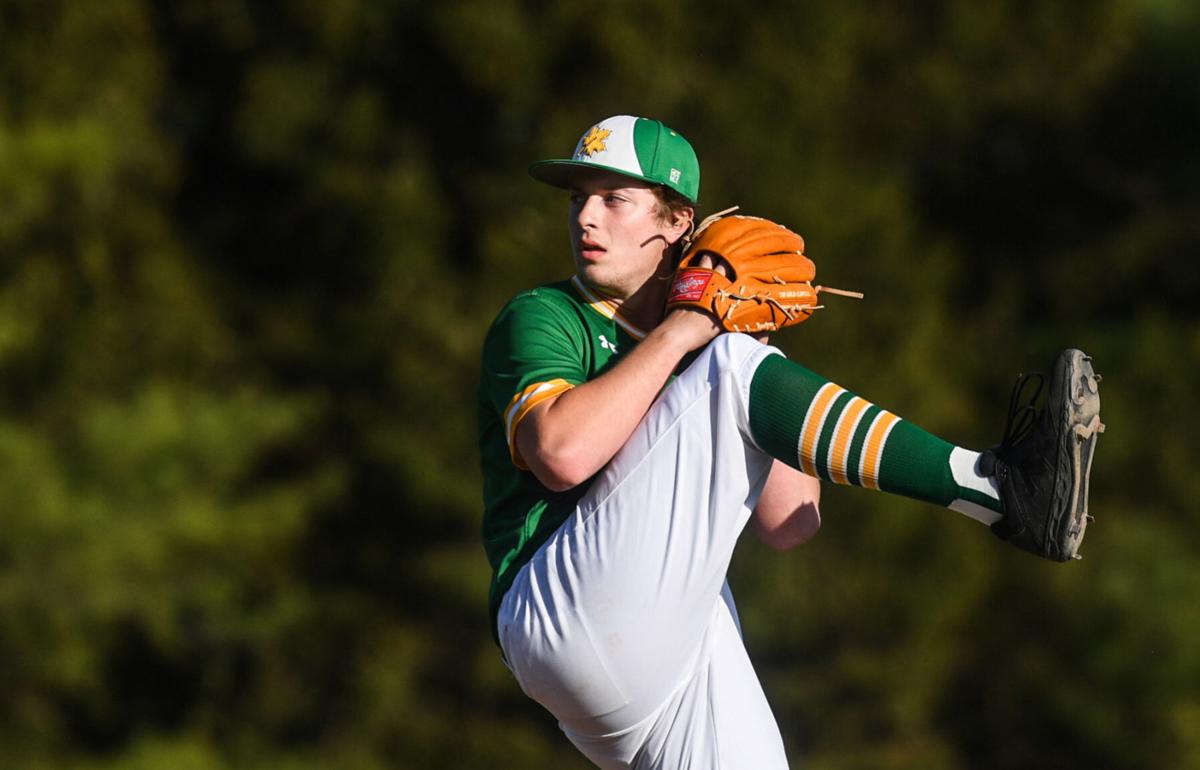 Geneseo’s PJ Moser pitches to a Quincy batter during their game at Richmond Hill Park Friday in Geneseo.

GENESEO — After a one-year delay necessitated by the COVID-19 pandemic, the Geneseo baseball team played its first games as members of the Western Big 6 Conference on Friday.

Above and beyond that distinction, Friday's doubleheader with the Quincy Blue Devils at Richmond Hill Park's Stone Field were key early-season games for the Maple Leafs as they looked to bounce back from consecutive losses following a 3-0 start to their season.

Behind strong pitching from the senior duo of Charlie Rice and P.J. Moser, Geneseo took Friday's opener 5-2, with the pair combining for 12 strikeouts. In the nightcap, the Maple Leafs rallied from a four-run deficit with three runs in the fifth and sixth innings to complete the sweep with a 6-4 victory.

"I think it was pretty good to come out 2-0 in the conference," said Moser, who followed up his first save of the season in the opener by earning his first win in the nightcap with four strikeouts in an inning and a third after relieving starter Jake Nelms.

"Like all teams, we haven't played in two years, and we've got a lot of seniors. We know what we can do, and we put it all together."

Down 4-0 in the second game after a two-run, fourth-inning home run by Quincy's Noah Harbin, Geneseo (5-2, 2-0) came back first with three fifth-inning runs, capped by Nathan Beneke's two-run single. In the last of the sixth, after A.J. Weller's RBI single tied it, Charlie Rice's two-run, inside-the-park home run completed the Leafs' comeback.

"That was big," said Geneseo coach Joe Nichols. "It was one of those where he hit it all the way to the wall, and they missed the cutoff man by the time he got to me (at third base), so he kept on going."

Friday's sweep came after the Leafs had dropped a pair of close games, falling 8-5 to Washington and 4-3 to Spring Valley Hall this past week.

"It was good to bounce back," Moser said. "We played a couple of good teams and had chances to win both games, but we didn't get down on ourselves."

In Friday's opener, the Leafs struck early against Quincy starter Harbin when Carson Rice worked a walk and eventually came in on a wild pitch for the game's first run. However, the Blue Devils (3-3, 0-2) quickly responded as Brady Walker homered to lead off the top of the second inning, tying the game at 1-1.

After giving up that clout, Rice got into a bit of trouble when Joe Schroeder and Connor Schwindeler hit back-to-back singles to put Blue Devils on first and second with nobody out.

He then settled down, getting the next two outs to start a string of 10 straight Quincy batters retired. Rice gave up just one more run the rest of the way, on a Luke Mettemeyer RBI double in the top of the fifth, and gave the hosts five solid innings in which he scattered six hits and allowed just two walks with eight strikeouts.

Rice also played a hand in a two-run third inning that gave Geneseo the lead for good at 3-1, swiping home on a successful double-steal with one out. Shortly thereafter, Nathan Beneke rapped a sharp single to score Carson Rice and make it a two-run game.

Following Mettemeyer's run-scoring two-bagger in the fifth, the Leafs got that run back when Moser (2-for-3) lined a double to right field to score Charlie Rice. In the last of the sixth, Thomas Henson belted a solo homer to lead off the inning and give Geneseo an insurance tally.

On the mound, Moser also made his presence felt. Relieving Rice to start the sixth inning, he came through with two innings of perfect baseball, striking out four of the six batters he faced and striking out the side in the top of the seventh to save the opening-game victory.

"The pitching in the first game really kept us in it," said Nichols. "We had a couple of innings when adversity came along, but we got strikeouts at key times."

United Township hands the Geneseo baseball team its first Western Big 6 losses of the season, following a 1-0 walk-off win in the opener with a 4-2 victory.

SHERRARD — In the first meeting between the Sherrard and Rockridge baseball teams, a three-run lead after three innings wound up being the dif…

ORION — Hailing from the Chicago suburb of Lockport, it was not until doing a stint as an assistant coach at Alleman that Thomas Smith became …

Western Big 6 competition opened for both United Township and Rock Island on Saturday at UT’s baseball field in East Moline, with the Panthers rolling to victory in the first game of the doubleheader by the score of 8-1, and the Rocks bouncing back in the afternoon game, scoring the go-ahead run in the top of the seventh inning to win and gain the split, 5-4.

Alleman's offense powered it to a win in a Game 1 slugfest in its opening Western Big 6 doubleheader against Moline, but the Maroon pitchers shut down the Pioneers in Game 2 to secure the split.

An already historic night was made even more memorable in the first Douglas Cup game played between the Moline and Rock Island baseball teams.

Geneseo’s Charles Rice (14) celebrates scoring a run against Quincy during their game at Richmond Hill Park on Friday in Geneseo.

Geneseo’s Nathan Beneke tags out Quincy’s Brady Walker at home plate during their game at Richmond Hill Park on Friday in Geneseo.

Geneseo’s PJ Moser pitches to a Quincy batter during their game at Richmond Hill Park Friday in Geneseo.