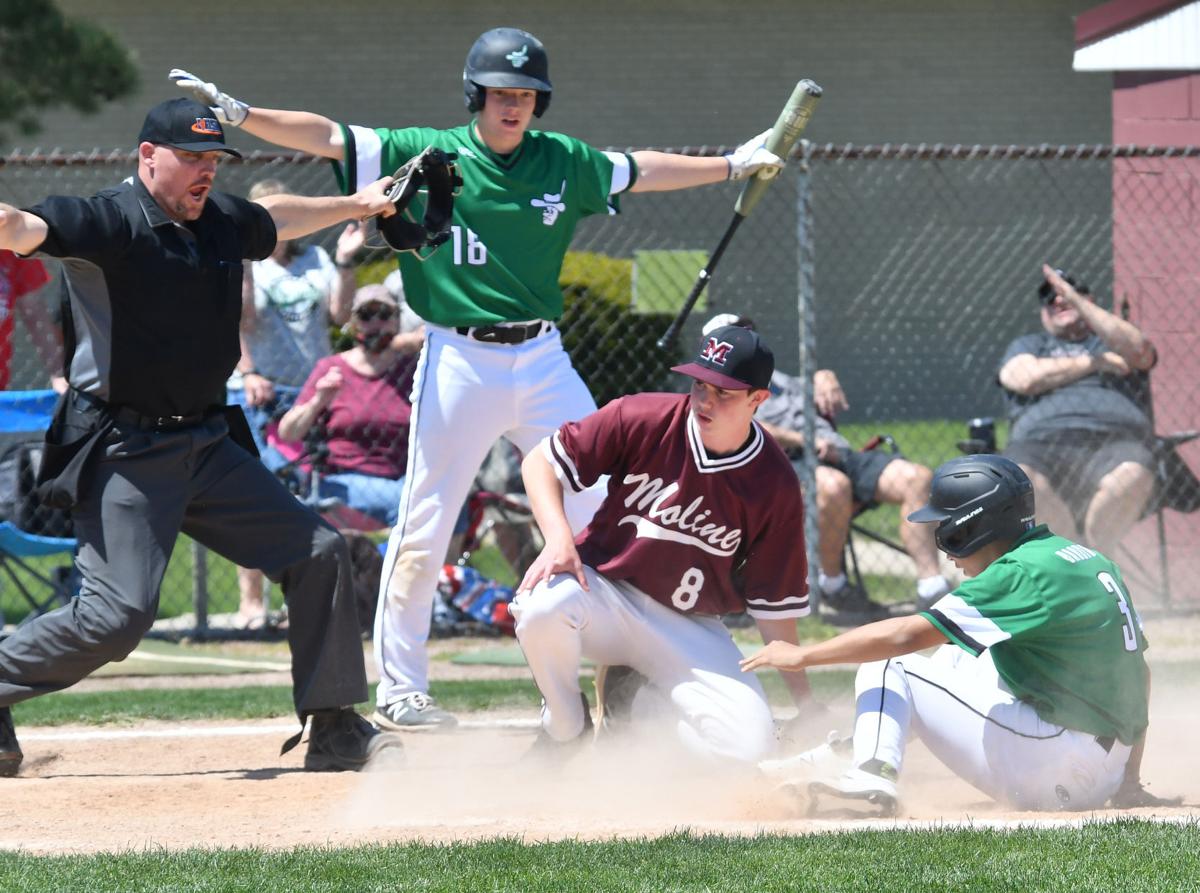 Alleman's Alex Barrios is called safe at home as Moline's Ethan Mesich-Fiems tries to apply the tag during the sixth inning of the first game of a doubleheader at Moline on Saturday. Alleman won the opener 15-13 but dropped the nightcap 16-3. 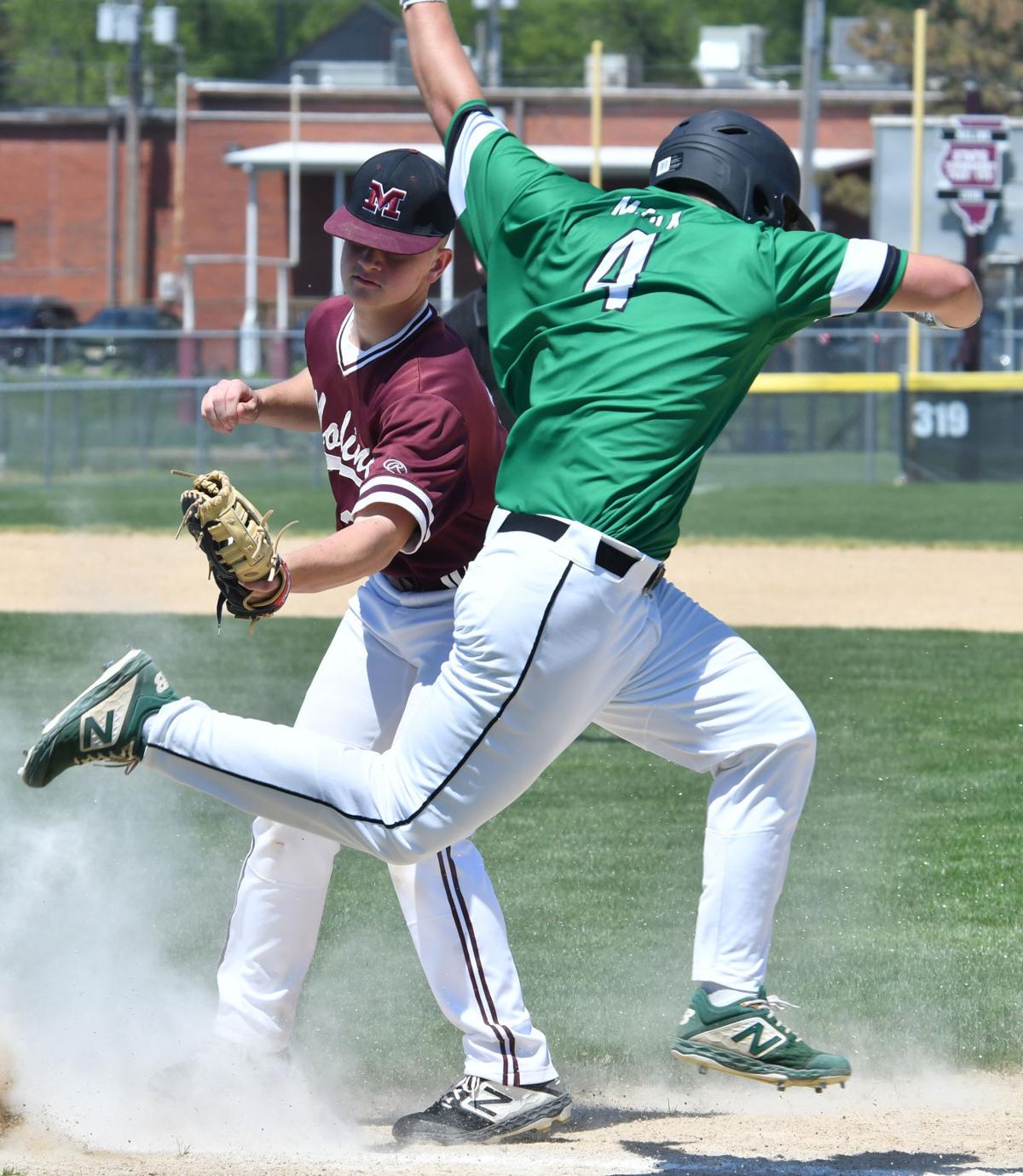 Alleman's Jackson Marx is tagged out at first by Moline's Seamus Boyle during the sixth inning of the first game of a doubleheader Saturday at Moline. 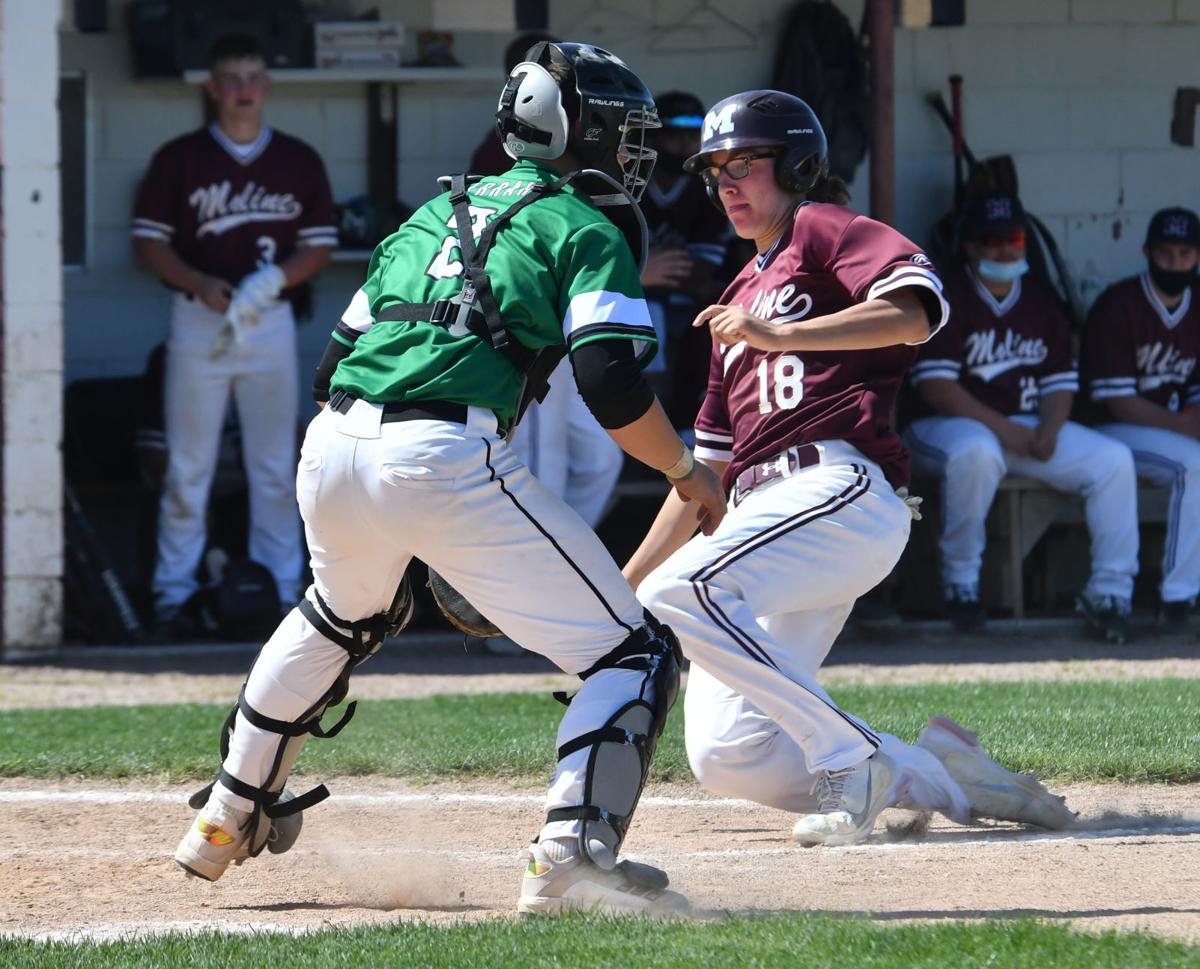 Moline courtesy runner Chase Tholl slides into home plate past Alleman catcher Dom Ferrari for a run during the second inning of Game 2 of a doubleheader Saturday.

It was a case of two very different baseball games for Alleman's offense on Saturday as the Pioneers took on Moline in their first Western Big 6 Conference doubleheader of the season.

The Pioneers won the first game 15-13 in a barn-burner, but couldn't get the offense going in Game 2 at Holmgren Field. The Maroons' bats, however, stayed hot for a 16-3, five-inning victory.

Noah Schneider came in with two outs in the fifth inning for the Pioneers in the opener while trailing 13-12 with a man on second. He got the final out of the inning and then only gave up one hit in the next two frames while his team got three runs to secure the victory.

Schneider had four strikeouts in his two innings to go with a 3-for-4 showing at the plate, with a double and two singles and scored three runs. It was a very simple approach for the Alleman senior on the mound.

"I just wanted to go into my approach with a good mindset," Schneider said. "I needed to pitch well to give my team a chance to win it."

Pioneers designated hitter and pitcher Payton Barton had a great day at the plate in both games, going 3-for-7 with three doubles and a walk. The wind was blowing out at Holmgren Field and helped carry the ball a bit, but that didn't affect Barton's mindset at the plate.

"It wasn't part of my approach to try and get under a ball, but when it happened the wind definitely helped," Barton said. "I just tried to get into the gaps."

Alleman coach Jerry Burkhead felt great with how his team, now 2-2-1 overall and 1-1 in WB6 play, handled itself against a squad with 12 games under its belt coming into the contest.

"The wind was tough and both teams drove the ball well," Burkhead said. "We had a good approach at the plate and our at bats were fine. Game 1 was a collective effort, and our senior leadership kept battling. Road games in the Western Big 6 are always tough, but we have a lot of respect for this Moline team and are happy with the split in the young season."

It was all Moline in Game 2 as the 7-7, 1-1 Maroons took a 6-0 lead in the bottom of the first inning and never looked back, scoring four runs in the second and five runs in the third. They added one in the fourth as well before retiring the side in the fifth to end the game by 10-run mercy rule.

Sophomore Conner Schimmel pitched all five innings for the Maroons and gave up three runs on 11 hits and struck out five. Schimmel also went 2-for-2 and had two RBIs.

Schimmel said he just believed in his capabilities on the mound, and that belief — along with some good defense from the Maroons — carried the team to the win.

"After the first inning I felt pretty confident on the mound," Schimmel said. "The lead after the bottom of the first helped more and I think made the defense more confident."

Maroons coach Craig Schimmel was pleased with how Conner, his nephew, performed on the mound and knows how important a good outing from the pitcher is to his team.

"Our success is very much predicated on pitching," Schimmel said. "Conner had good command over the zone and threw three scoreless innings. Our success starts with what he did and it was exactly what we needed."

Moline scored 29 runs between the two games and has had solid offensive outings all year, but even with the 13 runs in the first game, coach Schimmel felt his team could have done a better job at the plate.

"We need to be better with our plate appearances and have more complete at-bats," Schimmel said. "We had guys strikeout looking or go down on three straight, and we just need to create better chances."

United Township hands the Geneseo baseball team its first Western Big 6 losses of the season, following a 1-0 walk-off win in the opener with a 4-2 victory.

SHERRARD — In the first meeting between the Sherrard and Rockridge baseball teams, a three-run lead after three innings wound up being the dif…

ORION — Hailing from the Chicago suburb of Lockport, it was not until doing a stint as an assistant coach at Alleman that Thomas Smith became …

Western Big 6 competition opened for both United Township and Rock Island on Saturday at UT’s baseball field in East Moline, with the Panthers rolling to victory in the first game of the doubleheader by the score of 8-1, and the Rocks bouncing back in the afternoon game, scoring the go-ahead run in the top of the seventh inning to win and gain the split, 5-4.

The last time that the Normal Community and Moline baseball teams met, it was in late-May of 2019 and postseason hardware was on the line.

Alleman's Alex Barrios is called safe at home as Moline's Ethan Mesich-Fiems tries to apply the tag during the sixth inning of the first game of a doubleheader at Moline on Saturday. Alleman won the opener 15-13 but dropped the nightcap 16-3.

Alleman's Jackson Marx is tagged out at first by Moline's Seamus Boyle during the sixth inning of the first game of a doubleheader Saturday at Moline.

Moline courtesy runner Chase Tholl slides into home plate past Alleman catcher Dom Ferrari for a run during the second inning of Game 2 of a doubleheader Saturday.