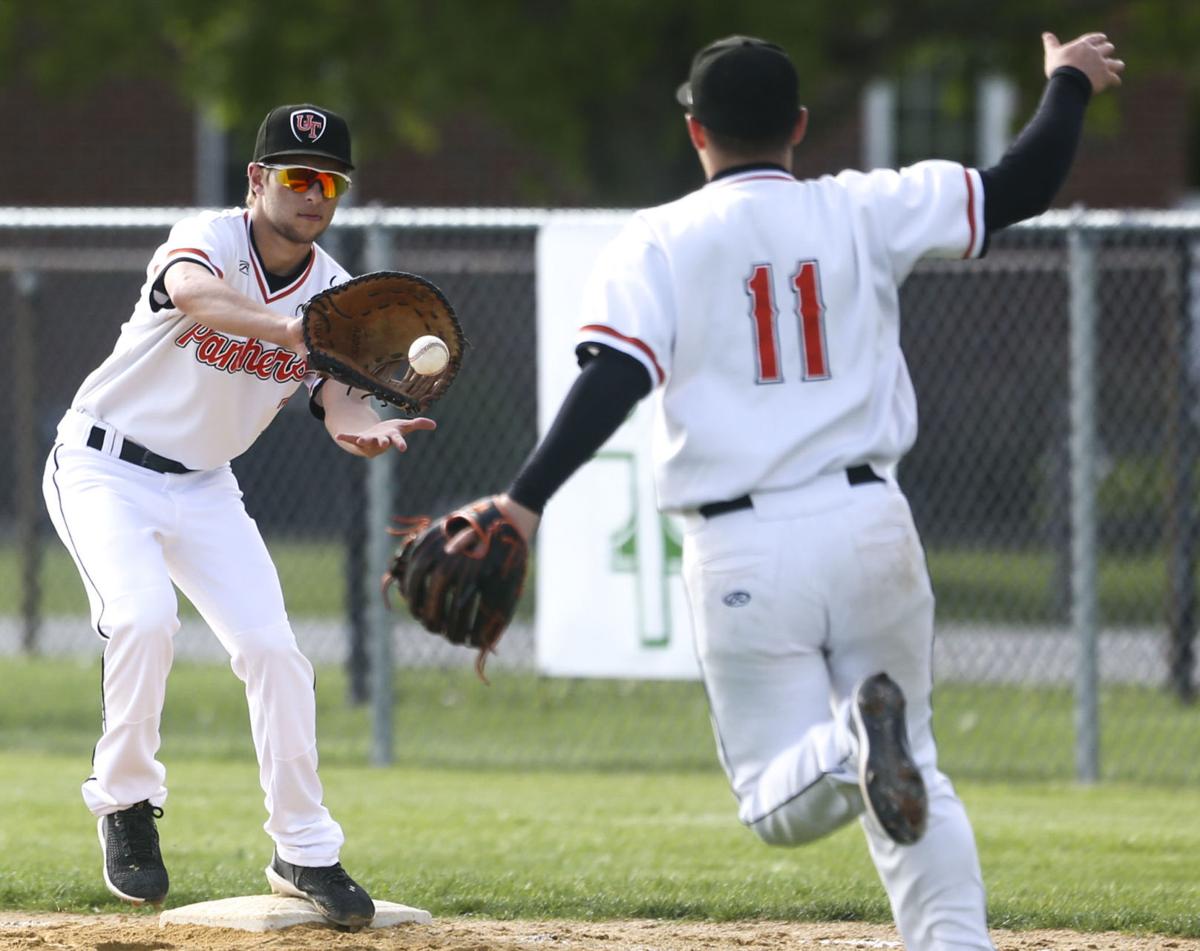 United Township starting pitcher Davin Thiem (11) makes a throw to teammate Jack Risius (7) at first base to get an out in Tuesday's Western Big 6 Conference game against Moline. Thiem was pretty good on the mound, too, in UT's 8-2 victory, tossing seven innings of two-hit ball. 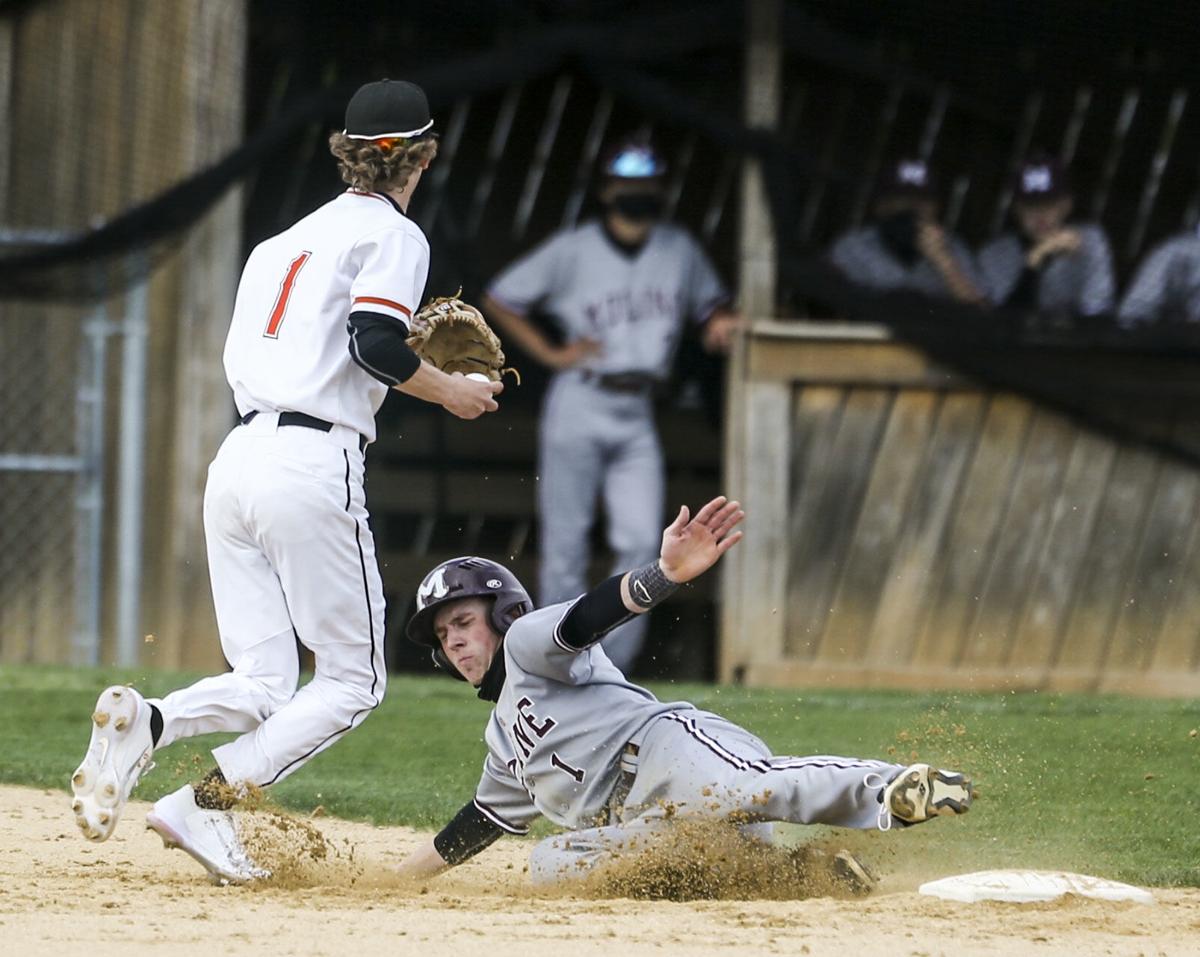 Moline's Ryne Schimmel (1) ends up sprawled on the ground as United Township infielder Jordan Ledford (1) moves in to make a potential play during Tuesday's Western Big 6 Conference baseball game at the UTHS Diamond in East Moline. The Panthers beat the Maroons 8-2.

After a seventh-inning run denied the United Township baseball squad a potential sweep of Rock Island in last Saturday's Western Big 6 Conference opening doubleheader, the Panthers shook it off and got back to work Tuesday afternoon.

Thiem (2-1) gave up just three walks and two singles — the first by Shawn Lewis in the top of the second inning, the other by Ryne Schimmel in the sixth — and retired nine in a row at one point as he took a shutout into the top of the sixth.

He benefitted from some early offensive outbursts that led to the hosts plating three runs in both the first and third innings. Those runs were more than enough to help the Panthers (4-4-1) move to 2-1 in Big 6 play.

The Maroons (7-8, 1-2 WB6) tried to put some pressure on in the top of the sixth. After Justin Grigsby walked and Schimmel singled to open the inning, a wild pitch put both runners in scoring position before Hunter Warren's RBI groundout scored Grigsby to end Thiem's shutout bid.

A short time later, Schimmel came in on a balk to get Moline back within striking distance at 6-2.

"I was kind of mad that those runs scored, but I didn't let it get to me," Thiem said. "I just had to go out there and finish the game."

As it turned out, United Township got those runs back in the home half of the sixth, courtesy of a two-run double by Ethan Harrison.

"On that last pitch, I was cutting it; I had two strikes on me and I had to protect the plate," Harrison said of his at-bat against Grigsby, who entered the game in the sixth. "He kept trying to work the outside corner, so I crowded the plate more and went 'oppo' (to the opposite field)."

For Moline, Tuesday's loss continued a recent downward trend as the Maroons lost for the sixth time in their last seven games.

"We're just not playing good baseball now. We've got to be more competitive," said Moline coach Craig Schimmel. "We do some good things, but we've had a tough time putting all three phases of the game together. We preach all year about trying to give ourselves a chance in our last at-bats, and we get two runs, but then we gave them back.

"Tip your cap to Thiem; he threw a good game. He was in the strike zone and had command of it all game. He went out with some confidence, and you could tell he was ready to go. That's what you expect from a four-year varsity player."

In the last of the third, an RBI double by Reid Murphy (2-for-3) and Graf's RBI single fueled another outburst that put the hosts up 6-0.

"This was a good game for us," said UT coach Mike Meyers. "We came out and got on the board early, and we tried to keep it going from there. Davin came out and had some really good stuff. It was a good job by all today."

Second-ranked Pleasant Valley was in danger of suffering its first loss of the season.

The Pleasant Valley baseball team swept Davenport Central 10-0 and 12-7 Thursday night to improve to 14-0 on the season.

Carson and Charlie Rice have been at the center of the Geneseo baseball team's sectional title run.

The Geneseo baseball team did not want to leave Stone Field after its best postseason run in school history came to an end in Monday night’s Class 3A super-sectional game.

Along with playing a key role in helping develop his younger teammates, Eli Merrick has also become one of the key players on the field for Annawan-Wethersfield.

United Township starting pitcher Davin Thiem (11) makes a throw to teammate Jack Risius (7) at first base to get an out in Tuesday's Western Big 6 Conference game against Moline. Thiem was pretty good on the mound, too, in UT's 8-2 victory, tossing seven innings of two-hit ball.

Moline's Ryne Schimmel (1) ends up sprawled on the ground as United Township infielder Jordan Ledford (1) moves in to make a potential play during Tuesday's Western Big 6 Conference baseball game at the UTHS Diamond in East Moline. The Panthers beat the Maroons 8-2.