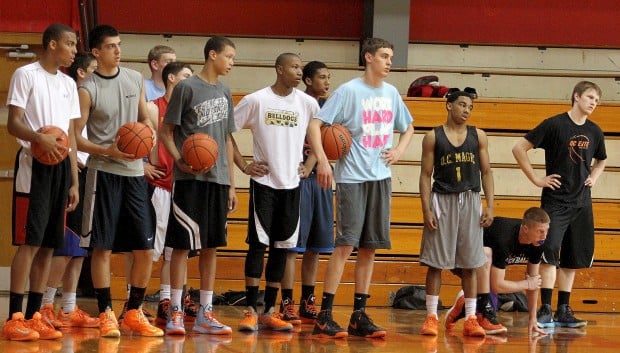 The Quad-City Elite AAU basketball team listens as a drill is explained to them during a practice in May. 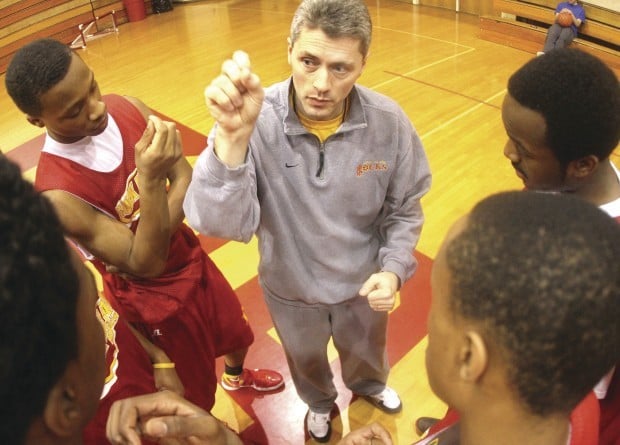 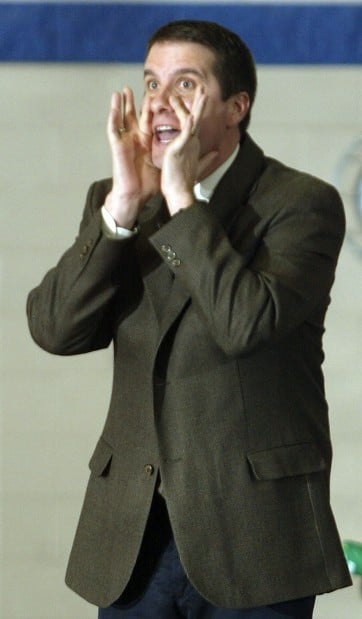 Former Bettendorf boys basketball coach Kevin Skillett said families need to have an honest conversation with the player's high school coach during his freshman or sophomore year about his potential before investing thousands of dollars into playing AAU. 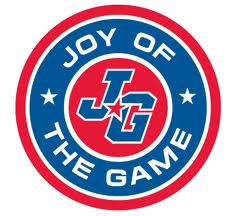 AAU tournaments, especially those that are NCAA-certified, are money-makers for those involved. Marketing and level of competition both can be major factors in its success.

Money is a driving force behind AAU. Families and teams pay hundreds or thousands of dollars just for the right to play, just for the chance to land a college scholarship.

Mike Springs is the tournament director for Joy of the Game in Chicago, which hosts NCAA-certified tournaments.

Springs said he goes out of his way to provide the best experience possible for teams, including using top-level facilities, scoreboards on every court and certified referees. His events have about a 60 percent retention rate from year to year. He said word of mouth is his best tool to find teams, but he also scours websites and sends out invitations.

"What's important is you do what you say you're going to do, because word of mouth will make or break you," Springs said.

The tournaments themselves bring in plenty of revenue.

NY2LA Sports will host two events in the coming weeks. The first will cost $550 for a team to register with play in the 14-under, 15-under, 16-under and 17-under divisions. The second will cost $650 and will be open to teams that play 15U-17U. Events average between 40 and 60 teams per age division. At minimum, the first event will earn $88,000 just for teams to have the right to play. NY2LA also charges between $175-$300 for coaches packets that provide information on the players to college recruiters.

AAU basketball does not come cheap. Depending on the team, families can expect to pay $400 to $4,000 per summer to play, including uniforms. That does not include transportation to and from practice or games, hotel rooms, food, gas or admission for those not playing. Most programs offer financial assistance for players who need it, but normally it only covers the cost to join the team, not the peripherals.

"In Iowa, Illinois and the Quad-City region I think it comes down to the haves and the have-nots," former Bettendorf coach Kevin Skillett said. "Families that can't afford AAU get left out in some respects and have to find other outlets for development."

Skillett said families need to have an honest conversation with the player's high school coach during his freshman or sophomore year about his potential before investing thousands of dollars into playing AAU.

"I think you need to have those conversations up front, because then you don't get in a situation midway through summer and it's a disappointment and you're in a terrible situation," Skillett said. "Now you've made an investment, you haven't gotten any better, you've spent time away from your own gym and you're not moving up that ladder on your high school team."

Even for those who have basketball in their blood, the costs must be weighed. When Rock Island coach Thom Sigel's oldest son, Trey, decided he wanted to play AAU, Sigel told him he needed to make sure it was something he really wanted to do.

"It's a big family commitment to do that," Sigel said. "It was one of those things that when he saw it, you're either going to make a commitment to work or we're not going to travel all over and do this."

Sigel said that just because someone makes an AAU team doesn't necessarily mean they can play a high level of basketball, which leads to some lopsided scores in tournament games.

"I saw a college coach tweet that it's easier to make an AAU team than a high school team nowadays," Sigel said. "What he meant was he just saw a team get beat by 70 or 80 and the people on the losing team aren't even high school players, but can get on an AAU team because they pay the money."

Some high-level programs also offer skills camps, which typically are broken down by position, and many have a separate shooting camp. Costs to attend these camps can range between $50-$100 per session. Nike EYBL offers a skills camp in which the top 15-20 high school players in the country at their positions can learn from NBA players such as Deron Williams, Kyrie Irving, Amare Stoudemire and Anthony Davis.

Quad-City Elite founder Logan Wynn said his program tries to find sponsors and hold fundraisers to help offset costs. One of his selling points is since the team is located in the Quad-Cities, it helps families save on some expenses by not traveling out of town for practices and games.

"We've had support from the community for the past two years," Wynn said. "Now that we're a non-profit, it makes it easier to find sponsors for donations."

Teams find players by one of two main methods. Programs will host what's called showcase events, where players demonstrate their skills during tryouts. Sometimes college recruiters attend these events, depending on the date they are held. Other programs prefer to add talent by invitation, hand-picking who they want on their squad.

Joe Hill, who coaches Da Future out of Davenport, said he tries his best to keep what he charges to play for his team to a minimum and like Wynn, he holds fundraisers to help offset costs.

Hill said when he started 10 years ago, travel was necessary to make sure players got seen. Now as AAU has grown, Hill sticks to the Midwest circuit. Hill said he tries to make sure his teams play in the important tournaments, but not every tournament, to help hold down expenses.

"There's some of these tournaments that jack up the cost," Hill said. "The certified events are what's important and that's what I hinge my program on."

Most popular QCVarsity.com stories of 2016

The dark, seamy side of AAU

Ask almost any coach associated with AAU basketball and they'll all tell you they've heard, seen or been offered some kind of dirty deal.

Summer school: The reality of AAU

Logan Wynn had the vision, but even he was surprised how quickly it became reality.

Summer school: The road to being recruited

The Quad-City Elite AAU basketball team listens as a drill is explained to them during a practice in May.

Former Bettendorf boys basketball coach Kevin Skillett said families need to have an honest conversation with the player's high school coach during his freshman or sophomore year about his potential before investing thousands of dollars into playing AAU.