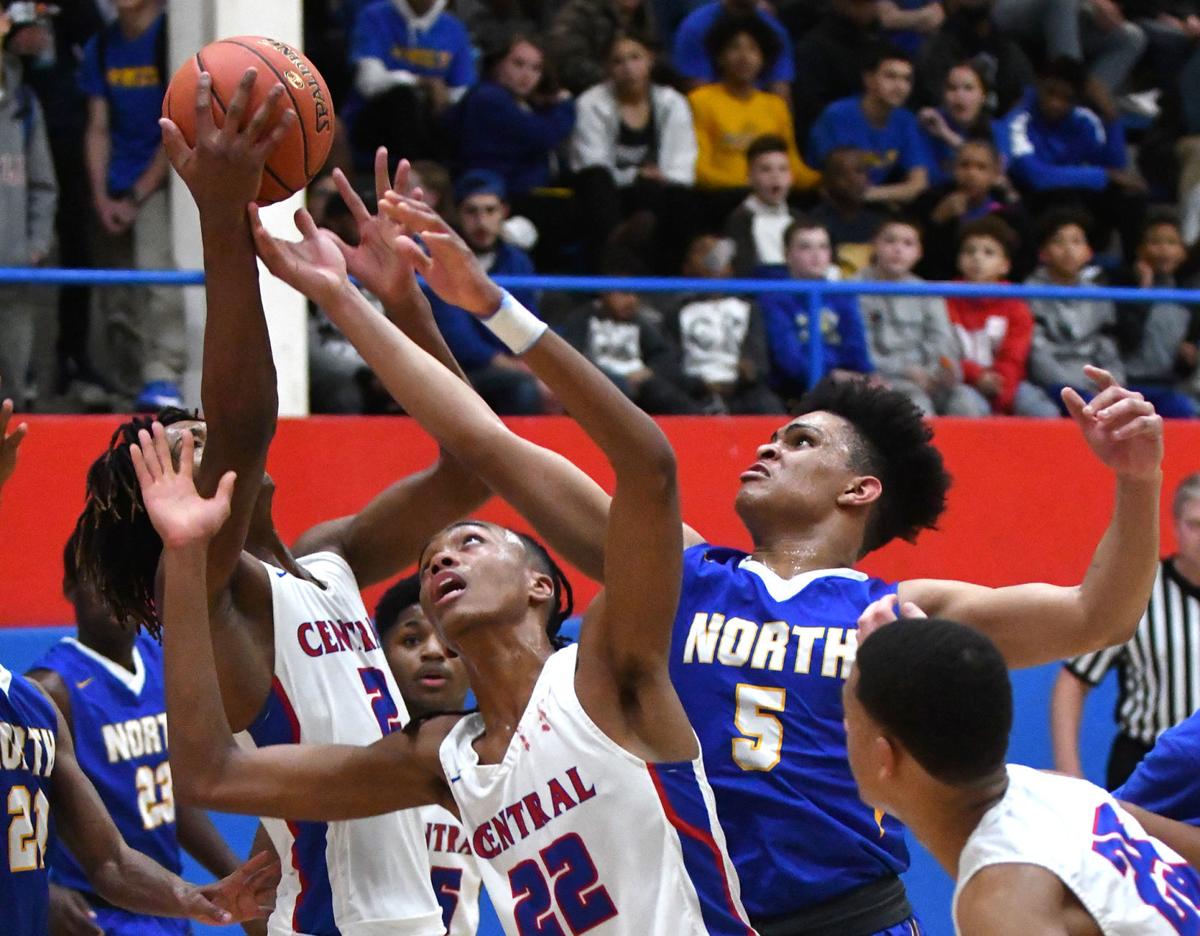 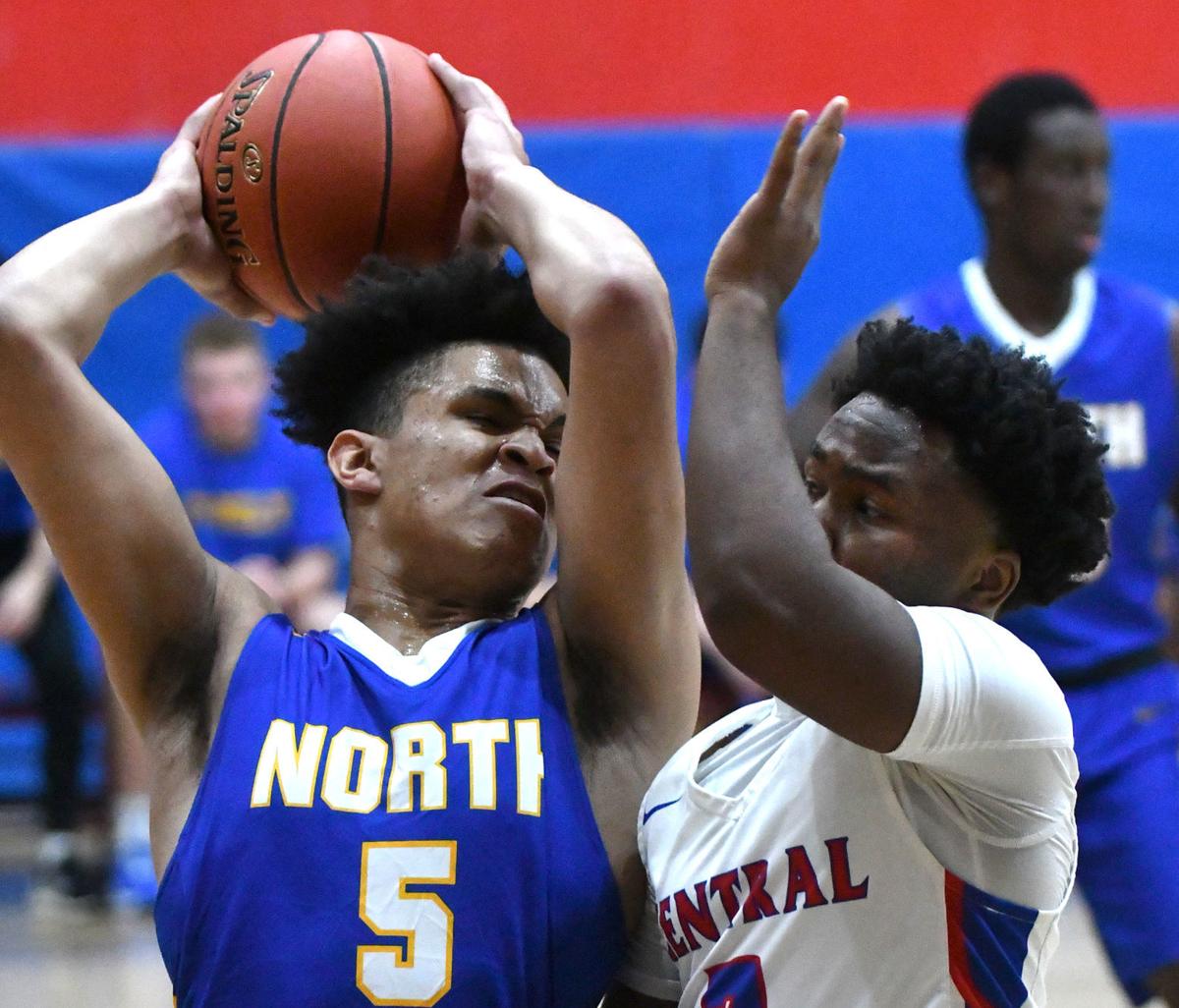 Davenport North's Jayden Houston keeps the ball away from Davenport Central's Amari Porter in the first half Friday night. 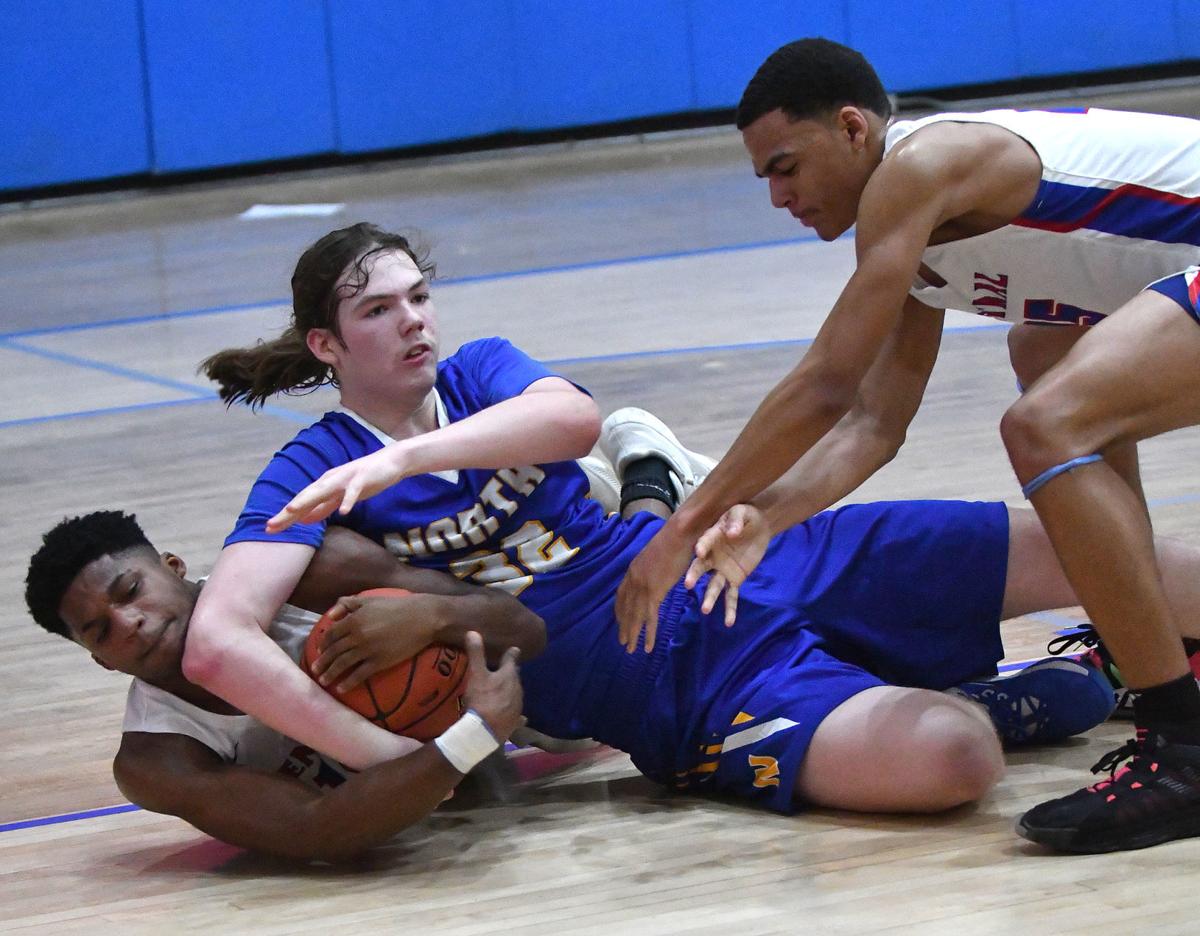 Davenport Central's Josh Howlett, and Donovan Wakefield along with Davenport North's Cade Guinn (32) go to the floor for a loose ball during Friday night's at George Marshall Gymnasium. Central won 57-49.

Central doused its head coach with water to celebrate his 400th career victory.

“It felt great to get coach wet,” junior John Miller said. “I think he was kind of happy.”

Wurdinger, in the coaching profession for almost 30 years, admitted it was an emotional moment in the locker room. Most of those victories have come at Dubuque Wahlert and Central.

“I’ve never been drenched like that,” Wurdinger said. “This would be the crew to do it.

“These type of things are about the players and about the teams, but it does feel good as a coach to do that in a career. It doesn’t seem like it happens too often now days because coaches don’t stay as long.”

Miller finished with a game-high 18 points while Emarion Ellis had 17 points and 11 rebounds.

The Blue Devils’ length and athleticism around the rim gave the Wildcats fits. Kaiden Phillips and Ellis combined for more than 10 blocks and altered many other attempts. Central came into the game leading Class 4A with 63 blocked shots.

“That’s their game,” North coach Marc Polite said. “We’re not a heavy 3-point shooting team. We’re at our best when we’re attacking the rim and lane. We’ve played against bigs, but not guys who block shots like that. We’re a little shorter and it is tough to score over.”

North’s Jayden Houston was a meager 5 of 18 from the field and finished with 10 points.

“That was pretty big,” Ellis said, “because he scores most of their points. We let teams get into the paint, so I’m glad we have Kaiden stop them or myself if I’m in there.”

Those blocked shots led to transition opportunities for Central.

North had whittled the deficit to five points in the early stages of the fourth quarter, but Ellis had three consecutive baskets — two on runouts — to extend the margin to double figures.

The Wildcats (8-4, 6-2) never recovered as the Blue Devils have handed their rival both of their league defeats so far.

“We knew this was a big game, a city game,” Miller said. “We know we can beat anybody if we play together.”

Central moves into sole possession of second place in the conference, a half-game in front of Assumption and North. The Blue Devils trail North Scott by two games in the loss column just past the midway point.

"We're not at our peak yet," Miller said. "We can improve our consistency and play for four quarters."

Mehki Jacobs couldn’t play after getting ejected Tuesday night at Bettendorf while Jamal Litt was in a serious car accident Wednesday. Litt had a cervical fusion to his fifth and sixth vertebrae Thursday morning in Iowa City.

Polite said Litt has been the team’s spark plug this season.

“We played in some fog tonight, but I told them afterward I was so proud of them for how we fought and battled. We easily could have folded and given every excuse because of the circumstances.”

Davenport North's Jayden Houston keeps the ball away from Davenport Central's Amari Porter in the first half Friday night.

Davenport Central's Josh Howlett, and Donovan Wakefield along with Davenport North's Cade Guinn (32) go to the floor for a loose ball during Friday night's at George Marshall Gymnasium. Central won 57-49.