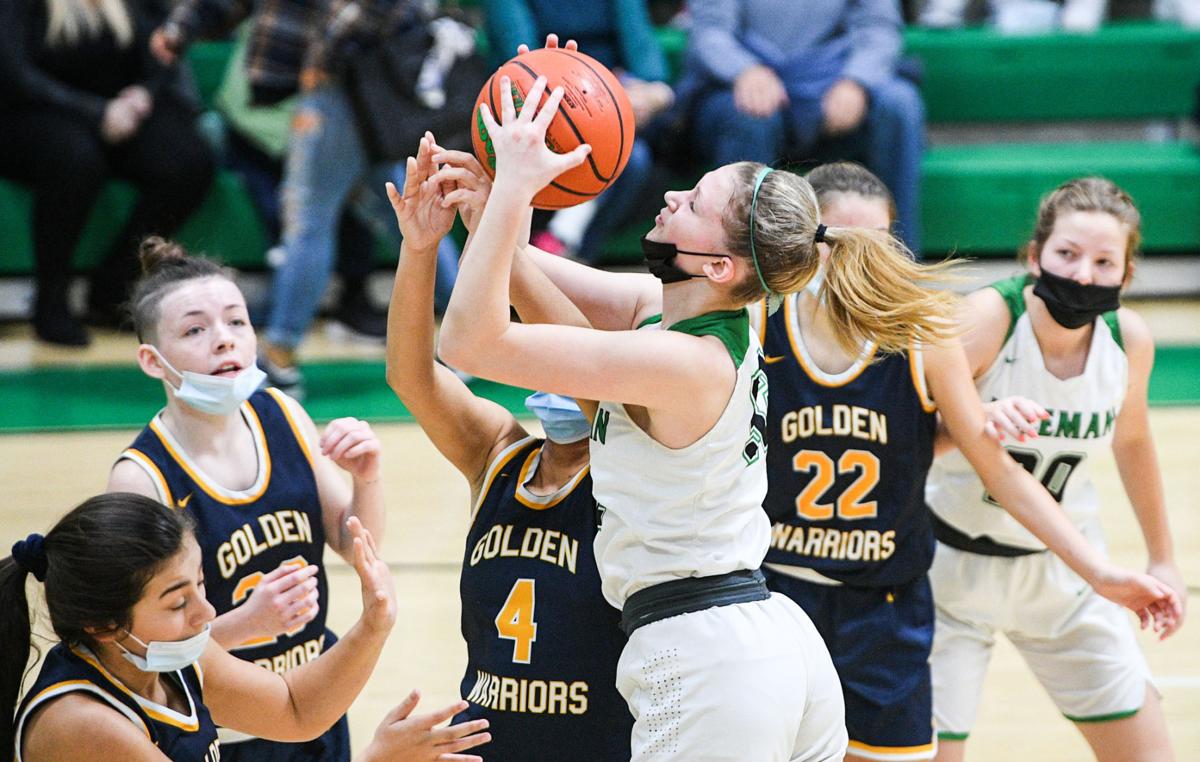 Alleman's Clair Hulke (32) goes up for a shot against Sterling's Olivia Turner (4) during the Western Big 6 conference opener Tuesday in Rock Island. 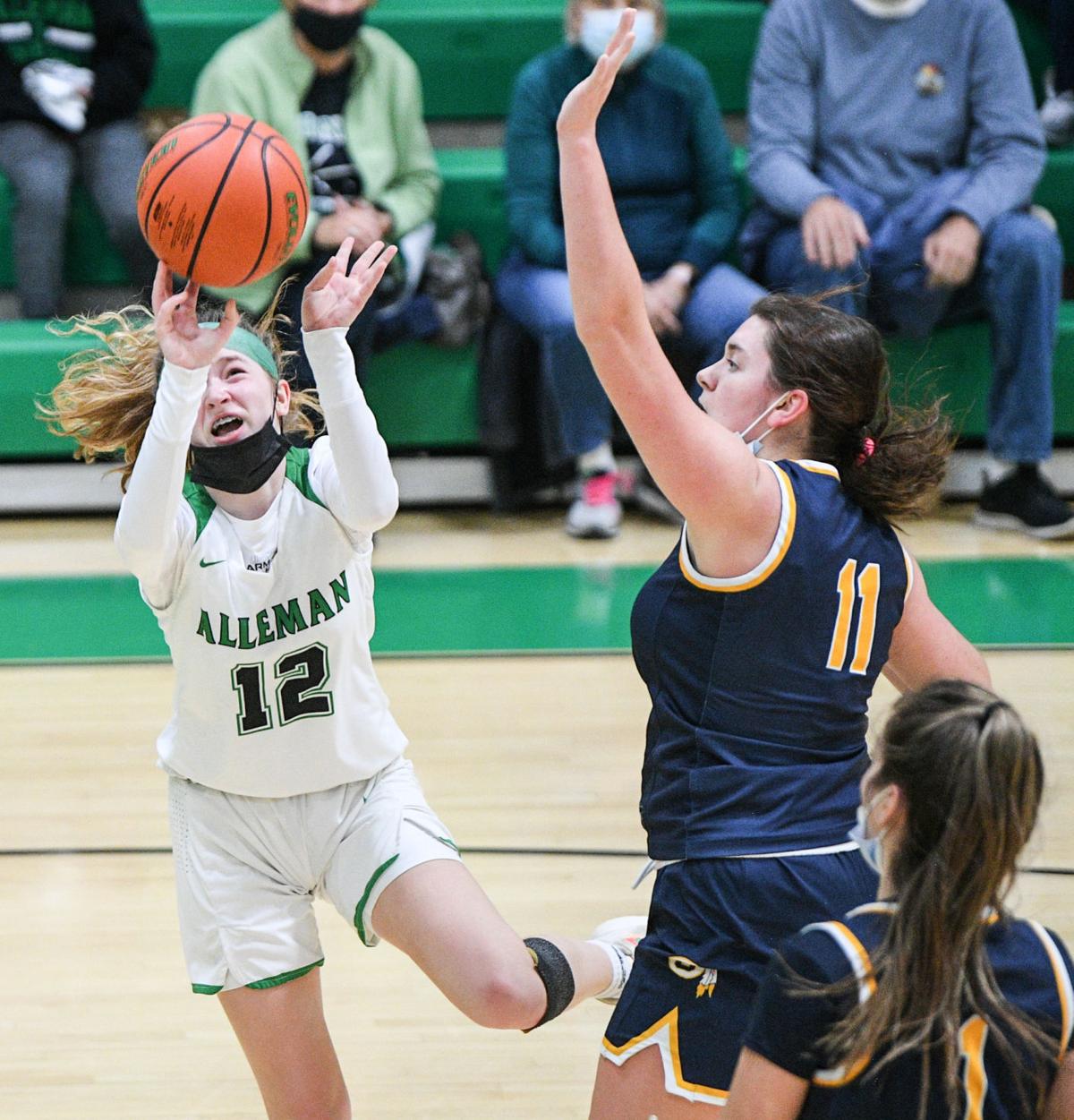 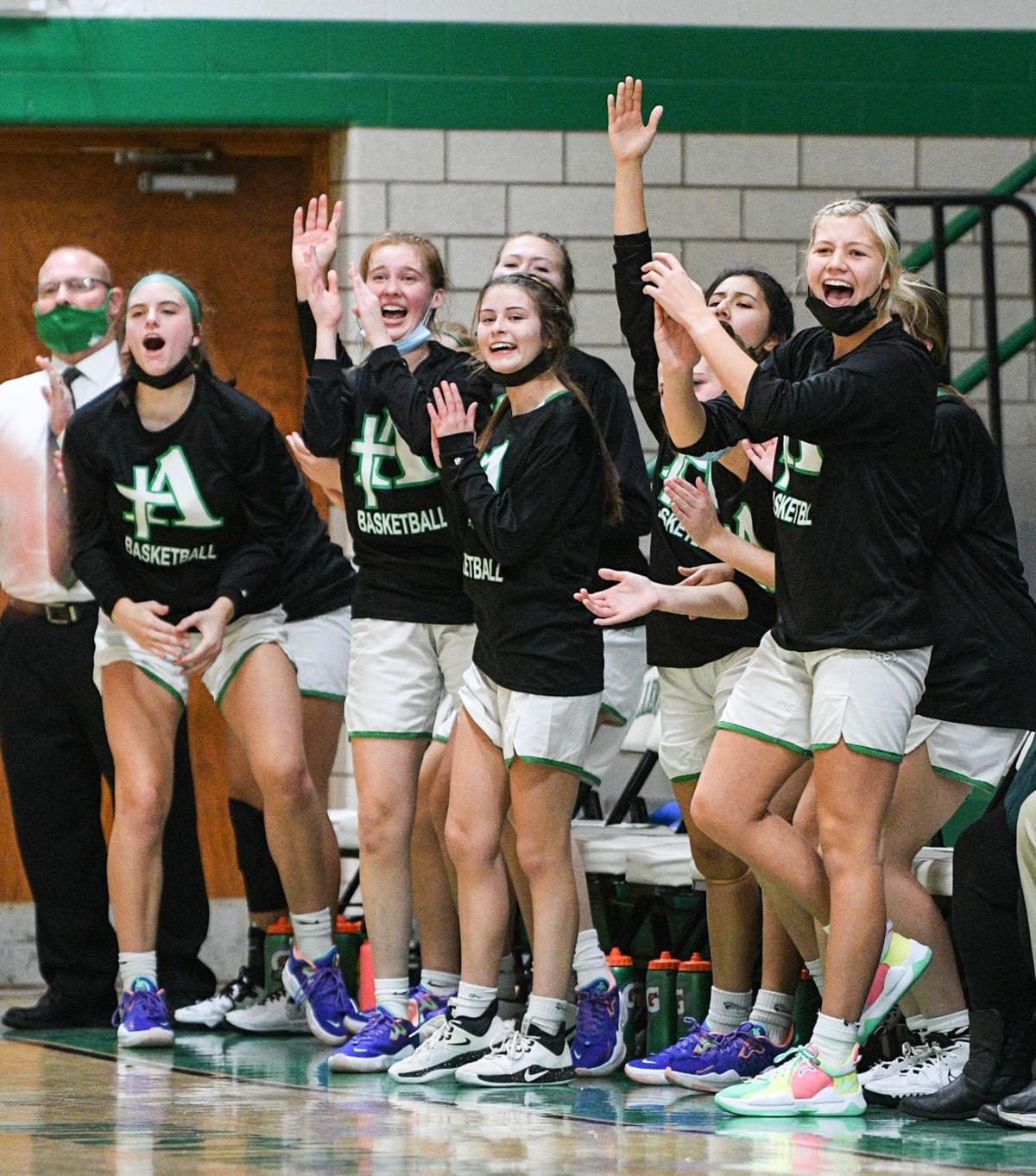 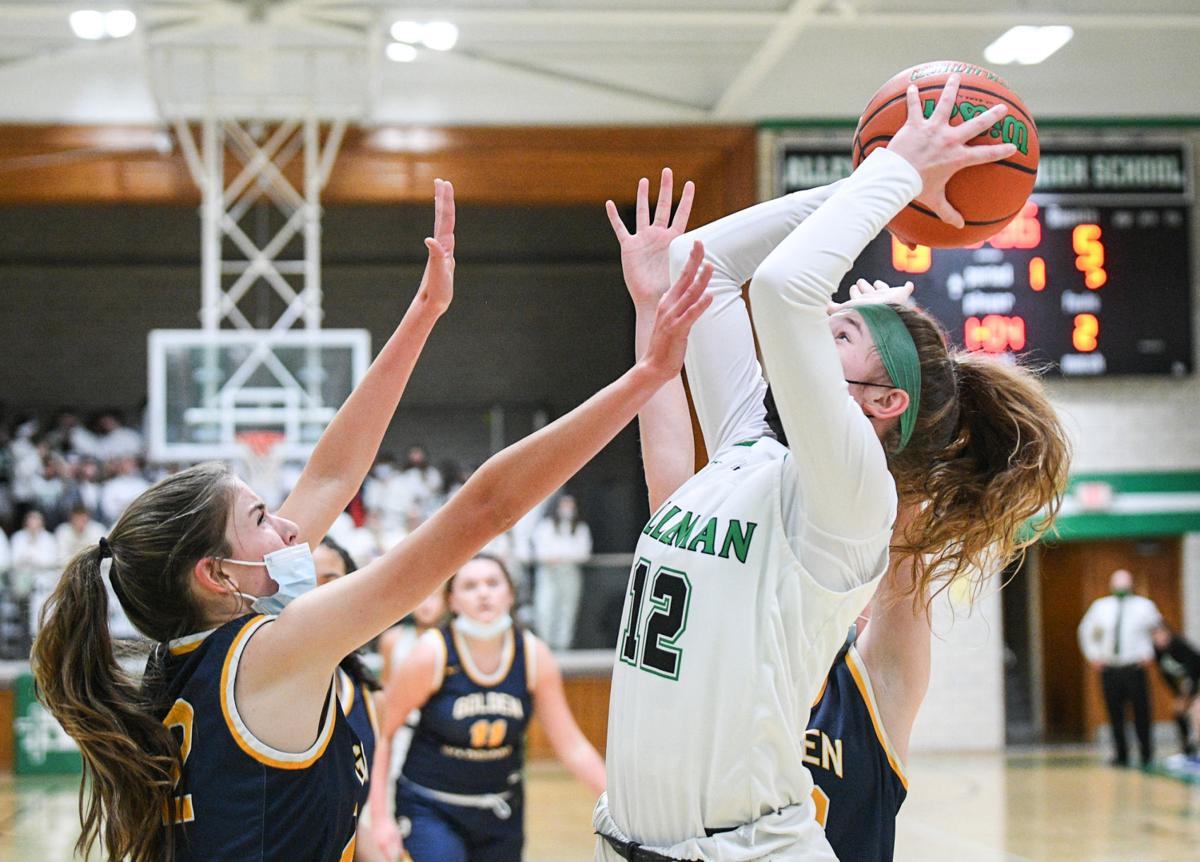 Alleman's Audrey Erickson (12) goes up for a shot against Sterling's Kaydence Weeks (22) during the Western Big 6 conference opener Tuesday in Rock Island.

After a disappointing 1-13 spring campaign, expectations were low.

The Pioneers (4-2) picked up their fourth win of the season with a lopsided 66-34 victory over Sterling in each teams’ conference opener Tuesday at Alleman.

And it wasn’t as close as the score indicated. It was 13-0 before Sterling got a bucket. The Golden Warriors never cut the lead to single digits.

It is a start no one saw coming — not even Alleman coach Steve Ford.

Clair Hulke was the star of the show, tallying 24 points and five rebounds. The 5-foot-10 sophomore forward was the tallest player on the court and it showed. For much of the first half, it was her game.

“She is a very confident offensive player,” Ford said. “She is a mismatch because she is good outside and inside. She has good footwork. She can shoot the 3 and she can drive. The kids have been giving her the ball more.”

And it wasn’t the first time Hulke had a performance like this. On Nov. 19, Hulke dropped 30 points in Alleman’s 50-46 victory over Macomb.

While Hulke was the leading scoring, Alleman jumped out to a 32-9 lead in the second quarter after six different Pioneers sinking a bucket in the first quarter. Alleman forced seven turnovers at half and out-rebounded Sterling 11-6 in the first half. It was a complete team victory.

“Everything went right,” Ford said. “Shots were doing down and we were getting good rebounds and forcing steals. It was just one of those games. I couldn’t ask for anything more.”

Sterling’s (1-2) best play was not one your can rely on — the 25-foot uncontested deep ball. Golden Warrior junior guard Addie McCombs hit three long 3s in the first half that kept the game from getting too far out of hand. She led Sterling with 18 points.

Alleman led 38-22 at the half and it only got more out of hand after intermission. Alleman’s offense in the second half seemed to come even easier, as lanes to the basket opened up for Hulke and Audrey Erickson once the offense started to look for it.

"We started off by settling for the 3, and after a short time we realized we needed to get touches inside," Ford said. "The girls made good entry passes in the right spots so that (Hulke) could have a good angle at the basket."

The defense was also a major factor. For the third time this season, Alleman held an opponent under 40 points. That's a recipe for success.

"That’s been the consistent to our team this year," Ford said. "What we are trying to do is getting better at communicating. I couldn’t hear if they did, but it seemed like they may have because we had a great game on defense."

The Pioneer lead swelled up to 56-29 by the end of the third and an uneventful fourth quarter ended things at 66-34. The gym was loud the entire game, thanks to the student section.

After the season Alleman had in the spring, this type of game was exactly what the Pioneers needed.

“I think this was really important for us because having that type of season, especially a COVID season, we just didn’t have time to adjust anything,” Hulke said. “Having more time to practice and more time to adjust things between games has helped us be able to perform better. I think we are just playing better as a team. We are playing together. You can see it. We are making connections.”

Erickson, a 5-foot-7 sophomore guard, also had a nice night for the Pioneers. She finished with 13 points and earned five rebounds. She forced multiple steals and had a couple coast-to-coast layups. Junior guard Averi Rangel was game manager, setting up the offense and making passes that lead to more Alleman points. She finished with seven points, all scored in the first.

“Rangel hit a lot of shots early in the game and that helped us believe that we can actually do this as opposed to last year, where our confidence was shaky,” Hulke said. “Nothing is going to happen with a great screen-set and passes. It has a lot to do with her and the rest of my teammates.”

The Pioneers have now quadrupled their win total from last year in less than half the games played. Alleman will return to the court at 7 p.m. Monday against Rock Falls on the road.

What a week for the Bettendorf girls’ basketball team.

With how much attention is given to Kammie Ludwig and Geneseo’s offensive ability, it was the Maple Leaf defense that sealed the 61-44 victory over Rock Island on Saturday.

Down 11 at halftime against Western Big 6 Conference crosstown rival Moline, the Rock Island girls basketball team settled into a groove after…

A capsule look at all 10 Mississippi Athletic Conference girls basketball teams this winter:

With two Division I signees back and a shot blocking presence inside, Central DeWitt believes it has all the ingredients to make a deep run this winter.

Moline outscored Alleman by 17 points in the third quarter on Saturday afternoon at the Pioneers' Don Morris Gymnasium, paving the way for the…

West Branch's trick is no treat for Durant 54-39

West Branch took control early and methodically pulled away to beat Durant 54-39 in an Iowa girls basketball matchup on November 30.

A look at some of the girls basketball teams and individuals in the Iowa area to keep an eye on this winter:

Alleman's Clair Hulke (32) goes up for a shot against Sterling's Olivia Turner (4) during the Western Big 6 conference opener Tuesday in Rock Island.

Alleman's Audrey Erickson (12) goes up for a shot against Sterling's Kaydence Weeks (22) during the Western Big 6 conference opener Tuesday in Rock Island.