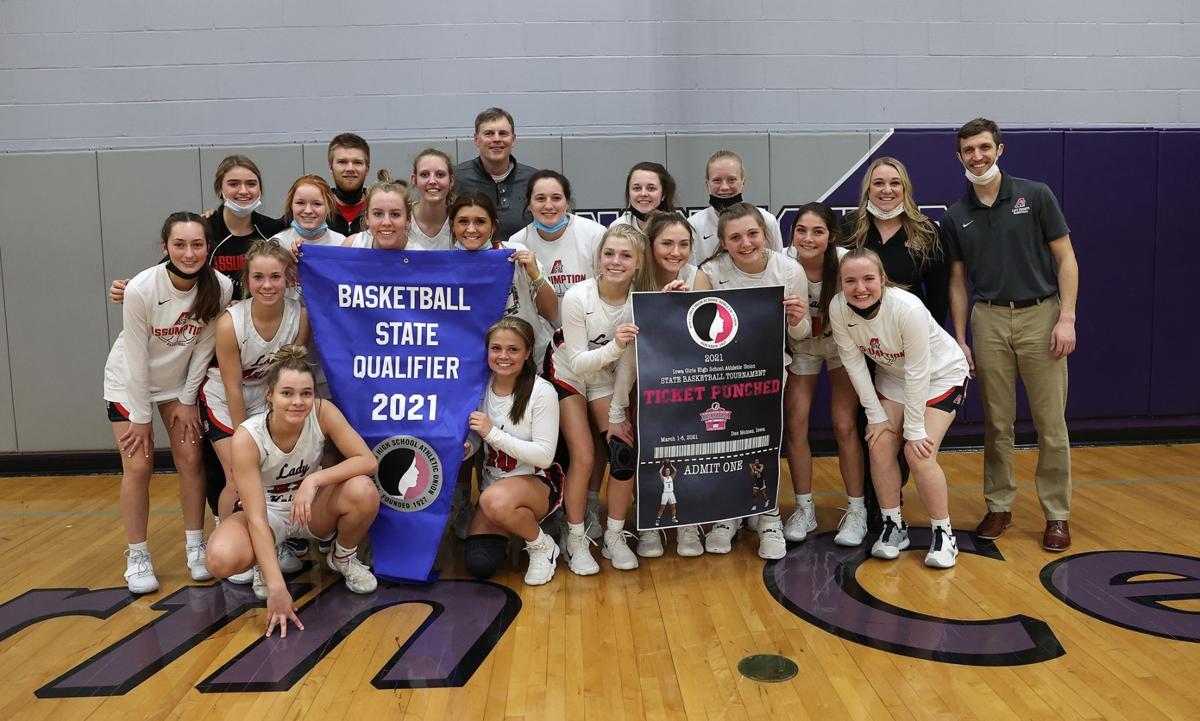 The Assumption girls basketball team celebrates earning a trip to the Class 3A state tournament after its win Saturday.

CLARENCE, Iowa — To the outside world, nobody would have thought that following a five-game losing streak and a 5-11 record, Davenport Assumption would sniff the state tournament.

“We knew in our hearts what we needed to do,” senior Anna Wohlers said. “The MAC is definitely a tough conference to be in and a lot of teams maybe take that for granted.”

Yet, time and time again, when it drops down to play fellow Class 3A opponents, the Knights always find a way to make it back to Wells Fargo Arena.

For the second straight season, the Knights are Des Moines bound. They earned this trip with a dominating and controlling wire-to-wire 49-36 triumph over No. 12 Solon at Saturday night at North Cedar Jr/Sr. High School.

First year head coach Jake Timm will take his team to state with an 8-11 record and the eighth seed with a date against top-ranked Cherokee on Monday, March 1, at 5 p.m.

All three postseason wins came away from Davenport, knocking out two top-15 opponents and all of them from the Wamac.

“I’ve had a lot of fun, I’m being 100% truthful to that,” Timm said. “I think we played a tough schedule, they wanted to come out and prove something. It doesn’t matter where, when, we’ll come out and battle our butts off.”

A distinct size advantage in the paint proved to be the offensive difference. With Wohlers, 6-foot-2 A.J. Schubert and freshman Maddy Nigey, that trifecta missed just six total shots in the first half en route to a 29-15 lead at the break.

Nigey had to enter early for Schubert, who was hit for two first-quarter fouls. She finished with four points and tied for the team high with five rebounds.

“Maddy is a great player, she does a great job on the court for us,” Wohlers said.

Wohlers scored seven of her 11 in the opening quarter while Schubert, despite the foul trouble, finished with 14 points, matching Dawsen Dorsey.

“Our goal was to establish inside,” Timm said. “We played our best game of the year.”

“Olivia really stuck on those two girls and made them work really hard,” Dorsey said. “It worked out for us.”

Ava Stebral scored seven of nine unanswered points to bring the Spartans within eight. Assumption, while flustered, answered the bell with a 6-0 spurt to bring the lead back to 14.

It never allowed Solon to get back within single digits the remainder of the night.

“We knew we had to calm down and move the ball around well,” Dorsey said. “We’ll get our looks, we’ll get our shots and that’s what happened.”

Now, the Knights will get to test the waters with 3A’s best in under 10 days. They are ready for the challenge, maintaining the underdog mentality they have for the entire postseason.

“These kids take great pride in being the underdog,” Timm said. “I feel like we’re playing really loose, playing well. If we can continue to play at that level, we’ll be in a good spot.”

Fountain thrives at the point for Lancers

DES MOINES — Its post game was non-existent. Its 3-point shots were rushed. Its final run came too late.

DES MOINES — The shots were short. The pressure was heavy. The postseason magic ran out.

In its first year in the Mississippi Athletic Conference, Central DeWitt won the most girls basketball games, was consistently in the top 5 of…

For Olivia Wardlow, an accidental injury on the diamond turned into wanting to play one more season on the hardwood.

Even without the delays and disruptions to the high school season engendered by the COVID-19 pandemic, the Annawan girls basketball squad was …

The Assumption girls basketball team celebrates earning a trip to the Class 3A state tournament after its win Saturday.