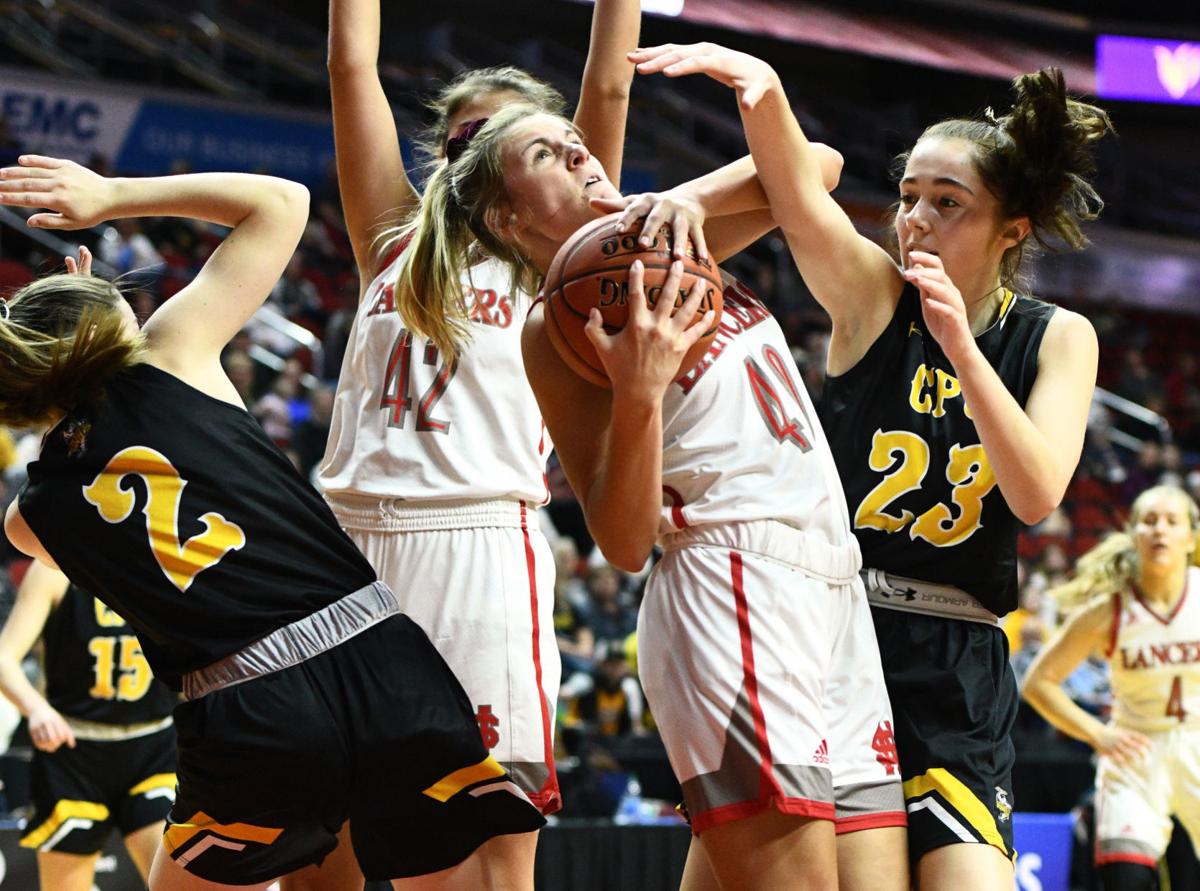 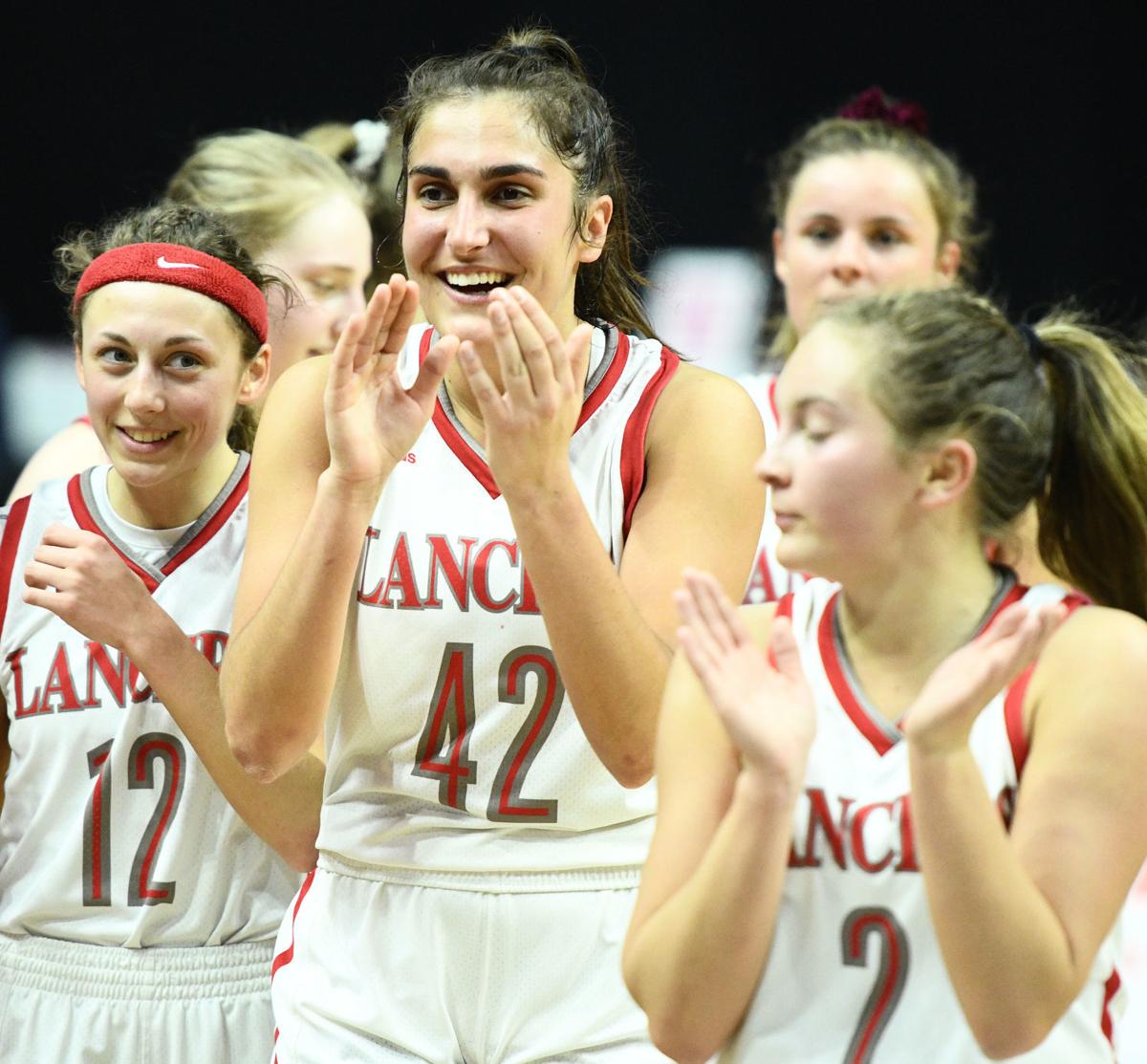 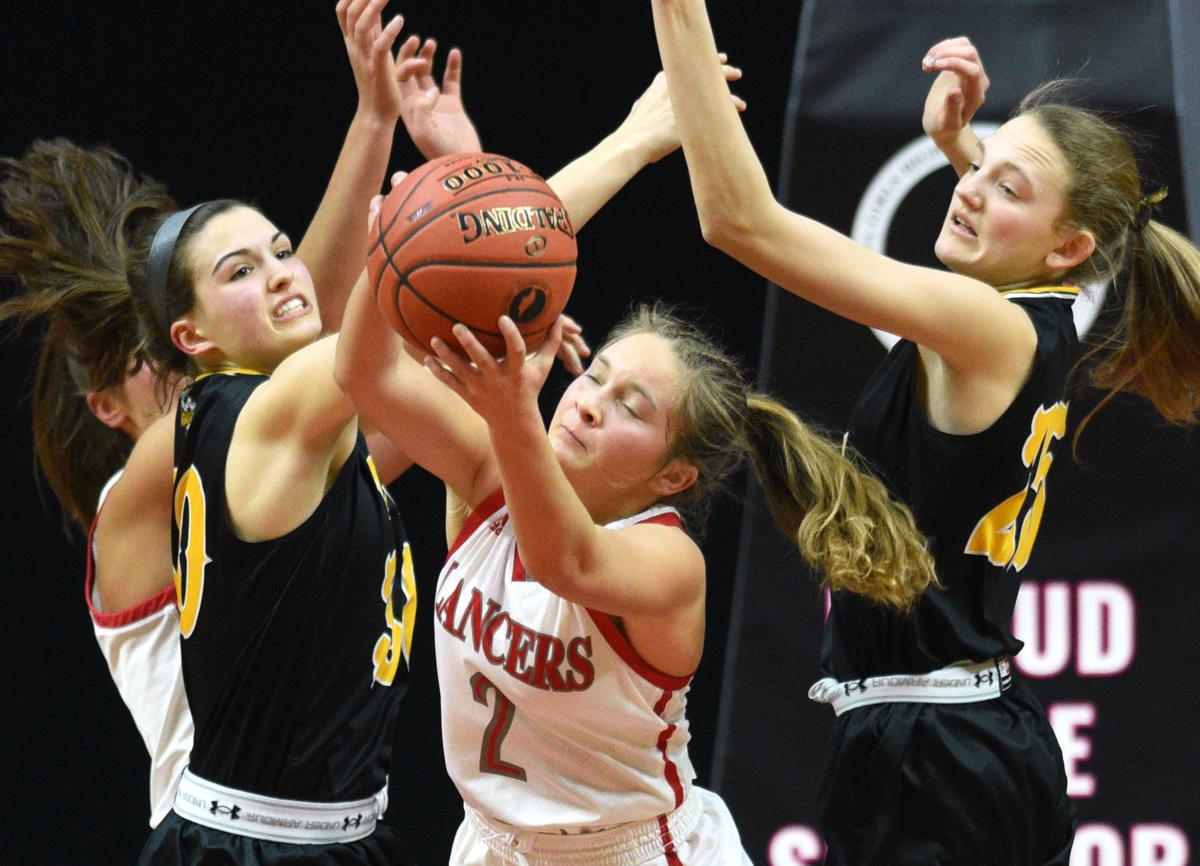 North Scott's Presley Case pulls down a rebound between Center Point-Urbana's Lauren Dufoe, left, and Ryley Goebel during their Class 4A state tournament semifinal Thursday at the Wells Fargo Arena in Des Moines.

DES MOINES — After a 20-point win in the quarterfinals, it might have been easy for North Scott to think it could roll to another state title.

The top-ranked Lancers were pushed every step of the way by Center Point-Urbana before pulling out a 40-32 win over the No. 5 Stormin' Pointers in Thursday's state semifinal at Wells Fargo Arena.

"It got us back to reality," junior Sam Scott said.

It might have been North Scott's worst offensive game of the year. The Lancers were held to their lowest point total of the season, shot just 15.8 percent from 3 and had 14 turnovers — several travels, double-dribbles and a 10-second violation.

But the defense rose to the occasion, lifting the Lancers to their 33rd straight win and a chance to win their third title in the last four years when they face No. 7 Lewis Central Saturday at 3 p.m.

"I think a lot of people think we're offensive driven, and I told this group from the get-go, Day 1, we could be special if we're going to defend," North Scott head coach TJ Case said. "They've bought into that. ... We had to live with our defense tonight."

North Scott's defense was key down the stretch. Leading 35-30 with 4 minutes, 24 seconds left in the game, the Lancers switched to a triangle and two and CPU missed its next seven shots. By the time Ryley Goebel's putback ended the drought with 13 seconds left, North Scott was up 40-32.

Both teams entered the game with championship pedigree, North Scott the defending 4A champion and CPU the defending champion in 3A. But both teams struggled to settle in for much of the game. CPU led 7-1 before North Scott went on a 6-0 run to tie the game 7-7 at the end of the first quarter.

The Stormin' Pointers regained a 10-8 lead before an and-1 from freshman Hattie Hagedorn — playing in her first game since Jan. 31 after suffering an ankle injury — gave North Scott an 11-10 lead and the Lancers never trailed again.

However, CPU never let the Lancers pull away, cutting an 18-13 halftime lead to 28-27 after three quarters on a 3 from Katcher, her first and only points of the game.

Presley Case opened the fourth quarter with a 3, Latham found Grace Boffeli for a bucket and North Scott upped its lead to 33-27 and held off CPU the rest of the way.

"I think we're figuring it out at the perfect time."

Center Point-Urbana didn't do anything fancy to defend Boffeli, manning the UNI commit with a combination of Goebel and Lauren Dufoe. To a degree, it worked as Boffeli was held under 20 points for just the fourth time this season, finishing with 17 points but also grabbing a game-high 14 rebounds.

"We want to man everybody, that's how we've been all year, but the way it was going, I was like, we can man them," CPU head coach Philip Klett said. "We wanted to make sure to guard some of their perimeter players and just wanted to front her and make her work."

Case and Boffeli led the team in the second half, scoring 16 of the team's 22 points in the final 16 minutes.

"It's just something I never thought would ever happen," Boffeli said. "But I'm just excited for Saturday."

North Scott's Presley Case pulls down a rebound between Center Point-Urbana's Lauren Dufoe, left, and Ryley Goebel during their Class 4A state tournament semifinal Thursday at the Wells Fargo Arena in Des Moines.