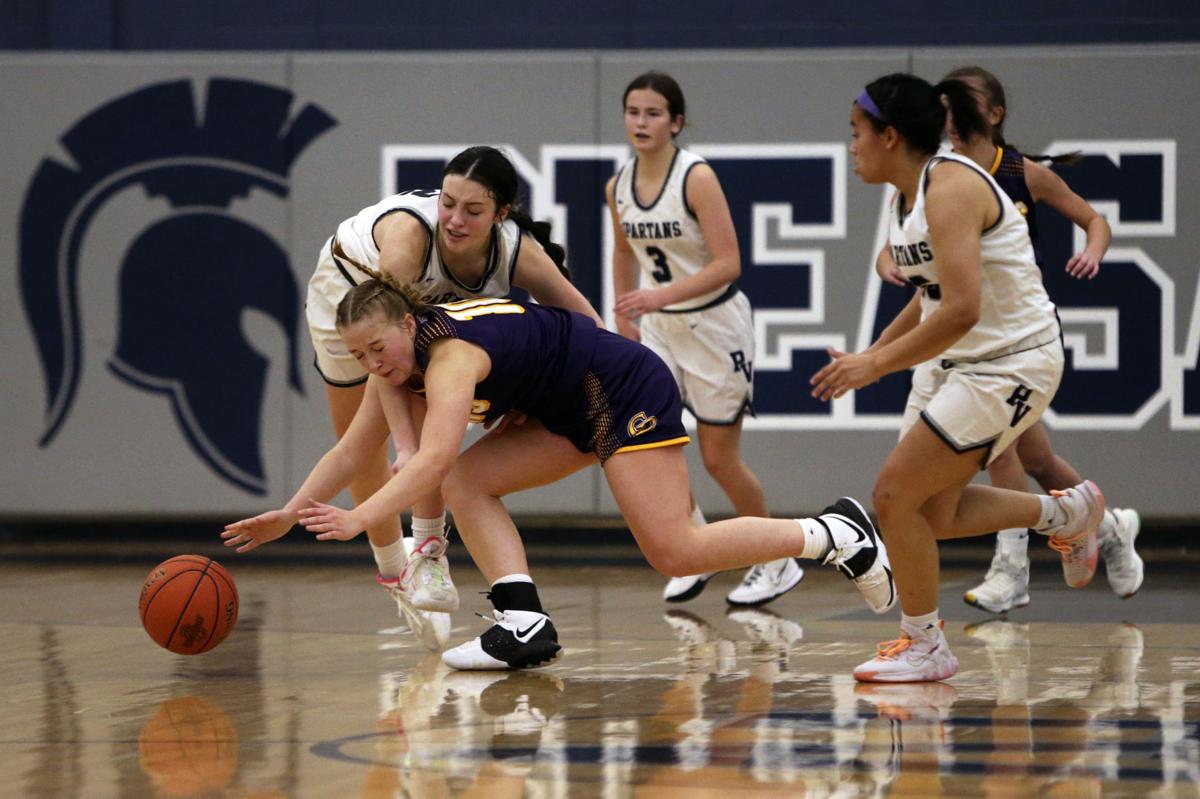 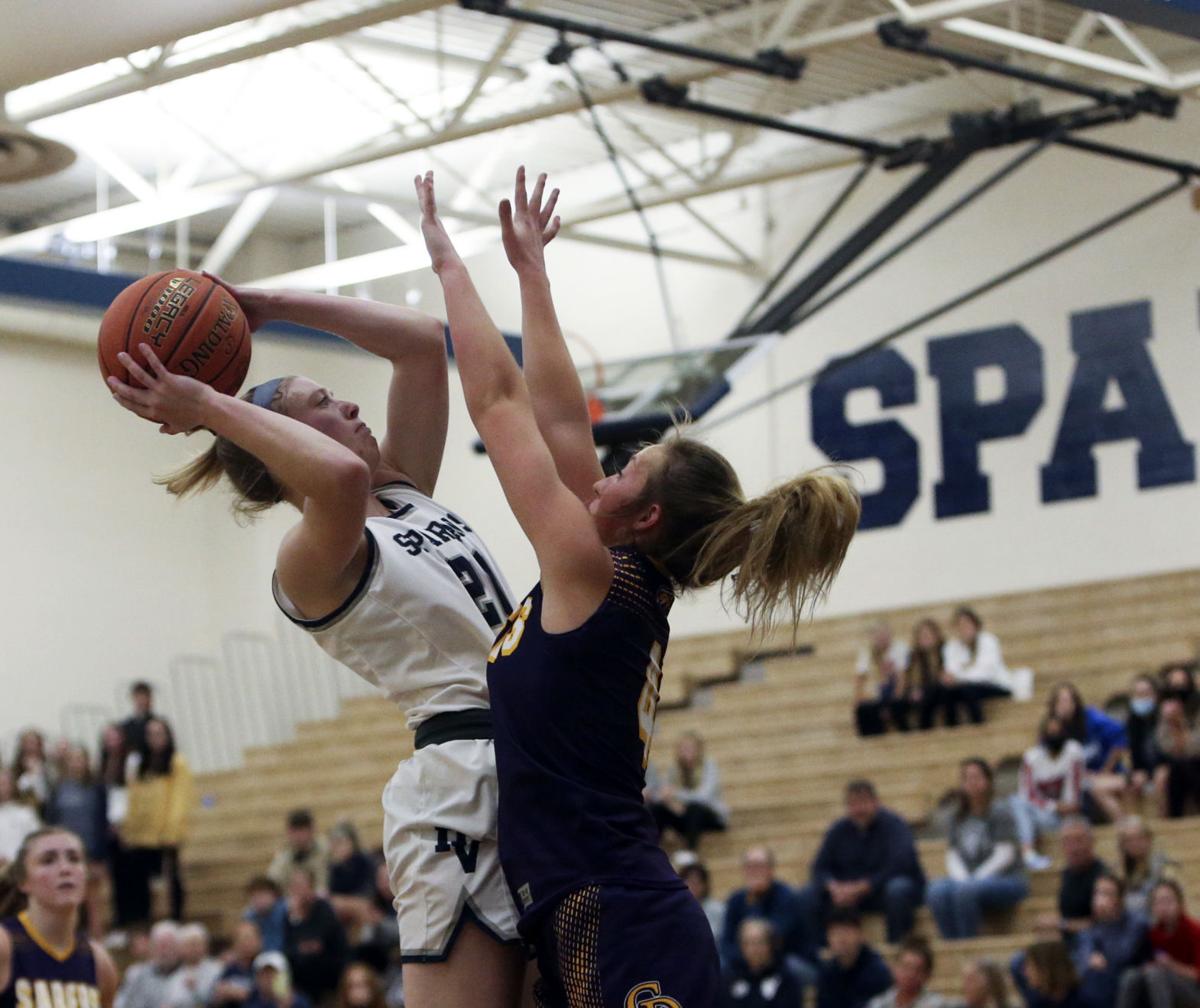 Pleasant Valley's Addie Kerkhoff takes a shot while being defended by Central DeWitt's Allie Meadows during Friday's contest at PV High School. Kerkhoff had 18 points for PV in its 44-34 victory. 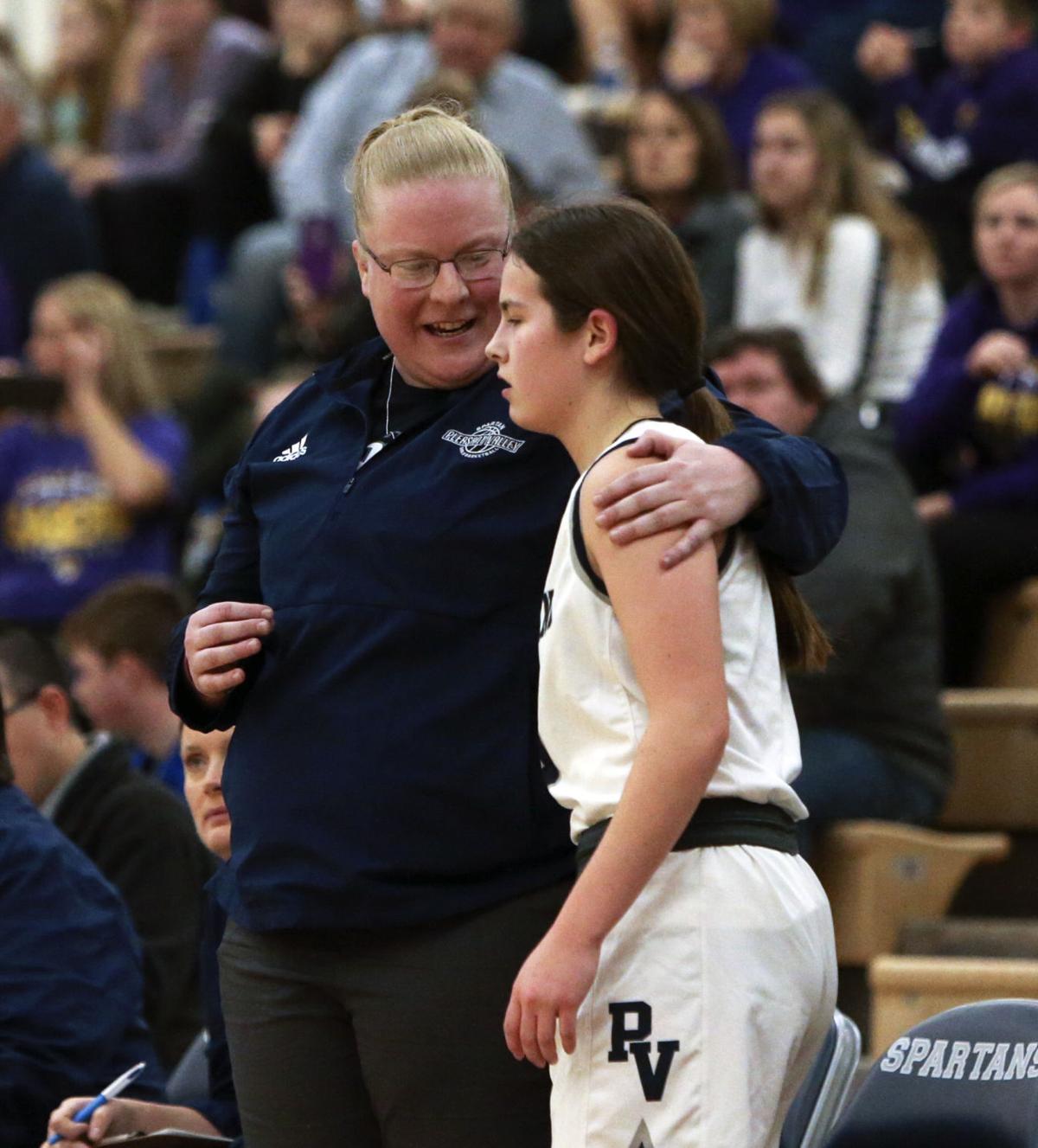 On several occasions last season, the Pleasant Valley High School girls basketball team was in position to knock off the top teams in the Mississippi Athletic Conference. The Spartans never could get over the threshold.

When it was crunch time Friday night against preseason conference favorite Central DeWitt, the Spartans didn't let the opportunity slip.

Class 5A 14th-ranked PV tallied the game’s final 10 points and held 4A third-ranked Central DeWitt scoreless over the final 4 minutes, 45 seconds to register a 44-34 triumph at PV High School.

“I thought our energy, our grit, our blue-collar attitude, we went to work,” Spartans coach Jennifer Goetz said. “It wasn’t pretty at times, but for the first time in a long time, we showed that PV girls basketball grit. It was so good to see.”

Addie Kerkhoff poured in a game-high 18 points and Halle Vice, despite being in foul trouble in the first half, finished with nine points and nine rebounds.

It was a freshman, though, that delivered the biggest shot of the game.

Clinging to a 36-34 lead and less than 3 minutes remaining, Vice found her sister, Quinn, in the left corner and she swished a 3-point shot.

“I was really trying to move without the ball and get open,” Quinn Vice said. “My sister threw me the pass, so we’ve worked on that. I felt really confident shooting it.”

“Huge confidence booster for her,” Goetz said. “We needed that. We were having a hard time putting the ball in the basket. You could see the weight lifted off our shoulders when that went in.”

After a strong third quarter allowed Central DeWitt (1-1, 1-1) to rally from a halftime deficit, the Sabers mustered only two field goals in the final eight minutes.

Coach Justin Shiltz’s team missed numerous shots around the rim. It turned the ball over 19 times and was 7 of 16 at the foul line.

“It starts at practice,” said senior Allie Meadows, who led the Sabers with 14 points. “It isn’t about making shots or missing layups. It is all about confidence. Right now, we have a couple girls show up to play and then the next time it is a couple more.

"We have some people right now who don’t believe in themselves. Once we figure that out, things are going to look great on offense.”

Senior Taylor Veach, who finished with nine points and eight rebounds, admitted a new system with a new head coach has added to the challenge.

“It is going to take us a little bit of time,” Veach said. “We have new girls stepping into roles they’re not used to. Once we get that down and get some things figured out, we’ll be good.”

A big part of Central DeWitt’s offensive struggles were tied to the defense of PV (2-0, 2-0). The Spartans’ ball pressure and length didn’t allow the Sabers to get comfortable in their half-court sets.

“For us, a lot of our defense comes from our energy and being able to communicate,” Kerkhoff said. “We talk a lot about being able to stay long since we’re a lengthy team. We try and use that best with our energy.”

It resulted in an early-season signature win for the Spartans, who lost games by five and three points, respectively, to the Sabers last year. They also dropped multiple close contests to Bettendorf and North Scott.

This time, with a group that includes three freshmen in the rotation and a couple others who have relatively little varsity experience, PV conquered the challenge.

“We’ve got some kids where basketball is really important to them,” Goetz said. “You can already see in this group they don’t care about the me, it is all about the (win).

“We live in a me-me-me society and what’s in it for me? We need more people to live with a grateful heart and enjoy other peoples successes. You’re watching that with this young group right now.”

Photos: Class 5A No. 14 Pleasant Valley beats Class 4A No. 3 Central DeWitt

Watch now: Badgers guard Brad Davison talks about how UW has come together as a team

Watch now: Badgers guard Brad Davison talks about how UW has come together as a team

North girls channel "Way of the Champion" in win over Bettendorf

Kilgore proves too much for Moline girls

Galesburg sophomore Kiarra Kilgore is emerging as a player to watch in the Western Big Six conference, and the Silver Streaks rode her 18 poin…

Sabers finish down the stretch to edge Blue Devils

It took a gutsy effort for the Rock Island girls basketball team to pull out a home win over United Township on Tuesday night.

Geneseo made it 18 consecutive wins to start the season with a dominant performance over North Scott on Saturday in the finale of the IHMVCU Shootout.

The Pleasant Valley girls basketball team won its seventh straight game with a 59-26 rout over Bettendorf at PV High School.

Saddled up and ready to go, Geneseo spurred past Brimfield 69-55 on January 14 in Illinois girls high school basketball.

Balanced Knights get back on track with win over Bravettes

With four players in double figures, Assumption handled Annawan 50-35 on Saturday in the IHMVCU Shootout at Augustana College.

Pleasant Valley's Addie Kerkhoff takes a shot while being defended by Central DeWitt's Allie Meadows during Friday's contest at PV High School. Kerkhoff had 18 points for PV in its 44-34 victory.