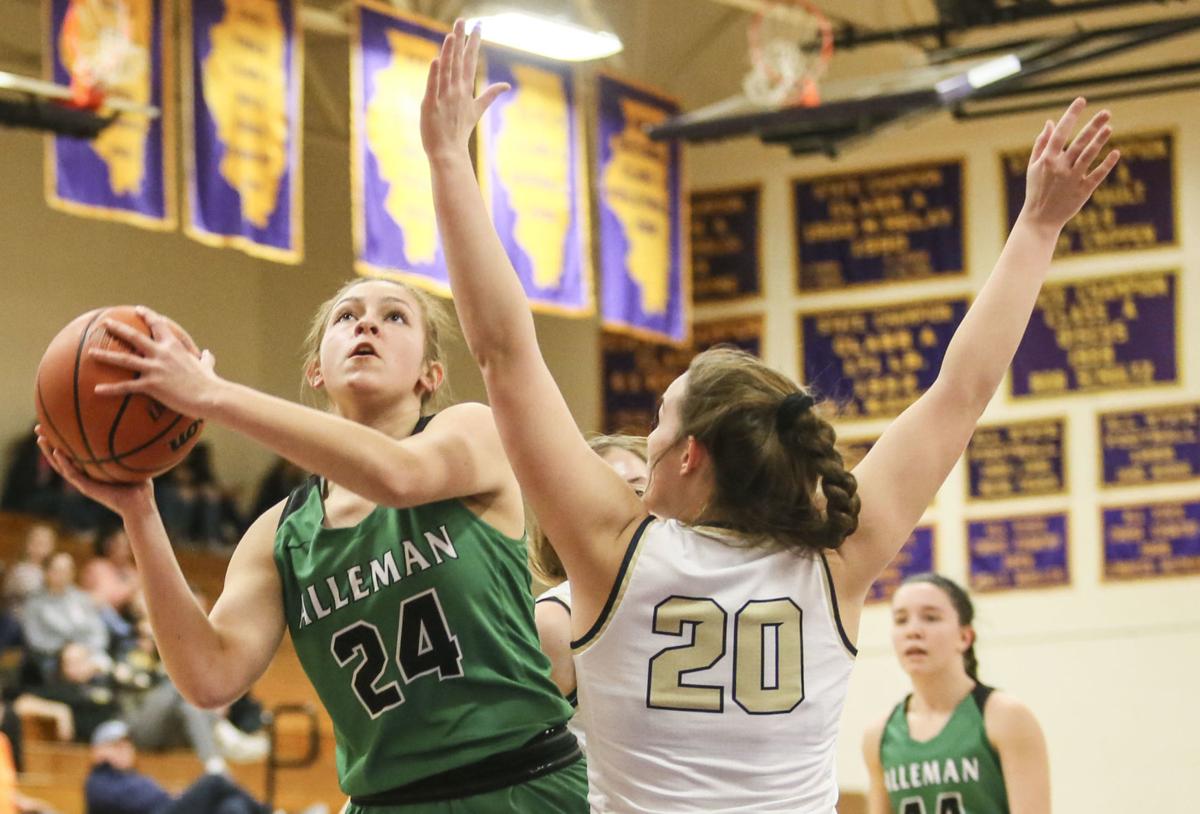 Alleman's Avrie Schmidt (24) goes up for a shot against Mercer County's Karli Stineman (20) in Class 2A regional action Monday night at Sherrard. 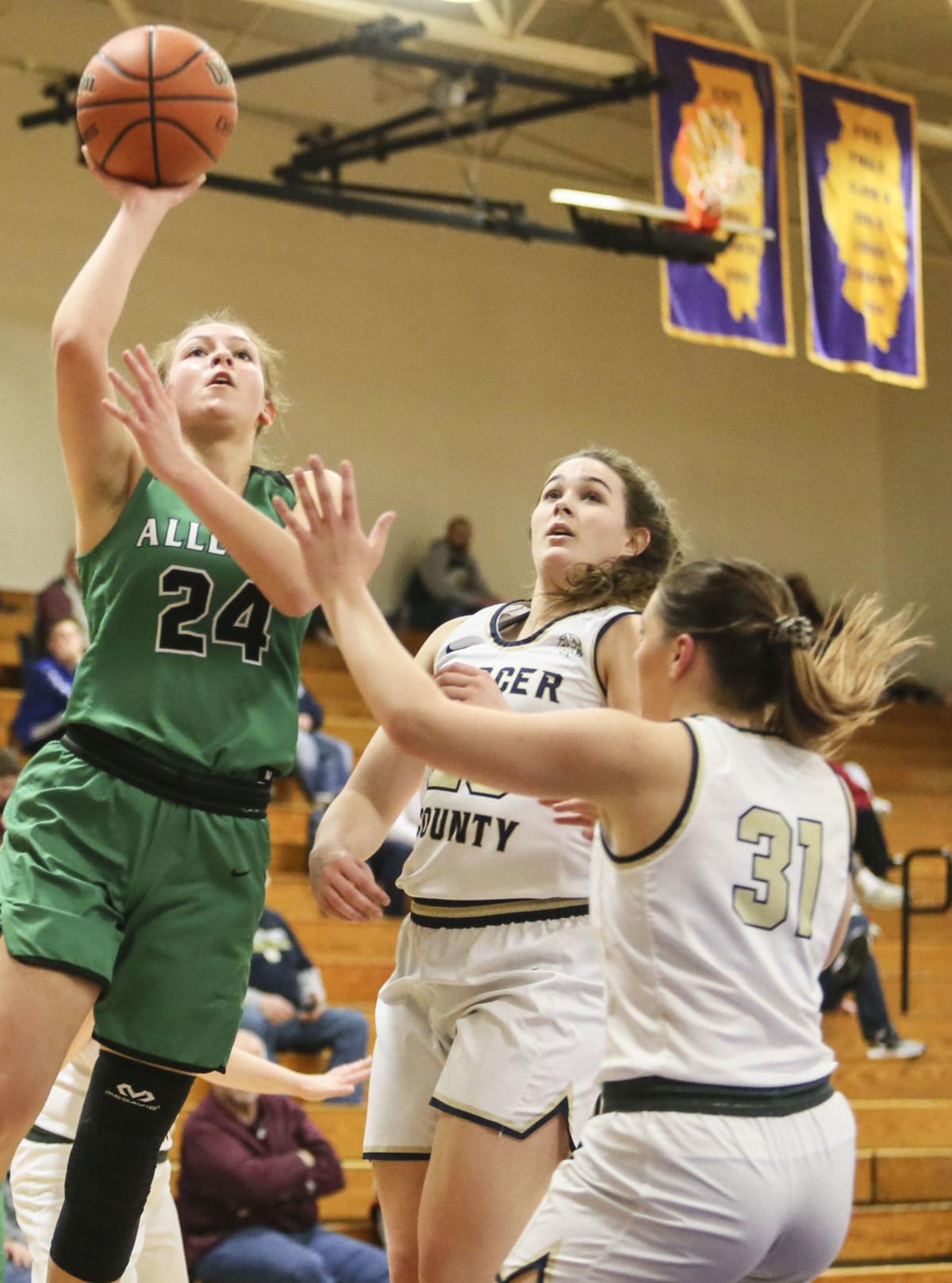 Alleman's Avrie Schmidt (24) goes up for a shot against Mercer County's Erika Sedam (31) in Class 2A regional action Monday night at Sherrard.

SHERRARD — Looking for its 20th win this season, the Mercer County girls basketball squad was also looking to take the first step toward the program's first postseason plaque.

That process began for the fifth-seeded Golden Eagles on Monday night in the opening round of the Class 2A Sherrard Regional. Taking on reigning regional champion Alleman, Mercer County used strong starts in both the third and fourth quarters to propel itself to a 42-35 victory.

Now 20-11, the Golden Eagles return to Harry Hunt Gymnasium tonight for the second of two regional semifinal games. Awaiting them will be fourth-seeded host Sherrard (14-14), which dropped a 39-24 decision to MerCo in both teams' regular-season finale.

"It's nice for us in that we should have a bit of confidence, knowing that we can beat Sherrard," said MerCo coach Katie Engwall. "That said, (Sherrard coach Doug Swanson) is a fantastic coach, and I know he'll have his team prepared for us."

Also moving on from Monday's first round was No. 8 Rockridge, which held Orion to just five second-half points to pull away to a 45-28 win and a semifinal date with top-seeded Carthage Illini West (24-4) this evening at 6.

"When these girls play hard, it's fun to watch," Rockridge coach Ryan McDonald said of his 14-16 squad, which topped the ninth-seeded Chargers (10-17) for the third time in four meetings this year.

Sedam sparks Eagles: With Mercer County leading the 11th-seeded Pioneers 15-13 at halftime, a three-point play by senior forward Ericka Sedam lit a spark that turned into an 8-of-13 shooting effort in the third quarter, enabling the Eagles to go up by as much as 10 points.

Alleman closed it to 32-25 going into the fourth quarter on a buzzer-beating 3-pointer by senior Samantha Coleman (nine rebounds, six points), but a Sedam trey early in the fourth helped MerCo regain its double-digit lead at 37-27. She finished with 12 points, seven rebounds and six steals.

"Kate told me I had many open shots, but I'm not always confident enough in myself," said Sedam. "I shot it, and it went in. I started feeling more confident in myself."

Sedam scored 10 of her 12 points in the second half, enabling the Eagles to weather a 16-point, 9-rebound effort by Pioneers sophomore standout Avrie Schmidt.

"We gave her a little pep talk at halftime, and did she respond," said Engwall. "We know what Ericka's capable of, and she knows what she's capable of. She was able to settle in and take charge in the second half."

For Alleman, it looks to a brighter future with all but Coleman returning from this year's squad.

"Our future's really bright with Avrie contributing on the offensive and defensive ends, and we've got some young ones who got plenty of experience this year," said Alleman coach Megan Delp. "It's hard for (the season) to end, but there's tons of positives to build on."

Defensive stand boosts Rockets: ​Up 30-23 at halftime after closing the first half on an 8-0 run, Rockridge went into lockdown mode on defense. In the second half, it held Orion to 1-of-13 shooting and forced 16 turnovers.

"They put the pressure on us, and we didn't handle it," said Orion coach Tony Stiles. "You can't not score and keep turning it over, because you're not going to win."

The Chargers trailed just 14-13 after one, and battled the Rockets in a second-period offensive flurry as Riley Filler scored eight of her team-best nine points in that span, including a 3-pointer that gave Orion its first lead at 20-17.

However, Rockridge had an answer in sophomore forward Kierney McDonald, who finished with game-highs of 23 points and 14 rebounds. Just as importantly, she showed an improved touch shooting from beyond the arc.

McDonald scored 12 of the Rockets' 14 first-period points on four 3-pointers, and had five in the first half as she scored 19 points. Combined with a pair of 3-balls from Madison Heisch (12 points), she triggered Rockridge's closing run that carried into the second half.

"Over the summer, I wanted to work on my 3-point shot and broaden my game, and be more than an inside threat," said McDonald. "A couple of games, I was in a bit of a shooting slump, but I just had to shoot my way out of it."

DEKALB — After another smothering defensive performance and a 20-point effort from senior Sidney Garrett, the Riverdale girls basketball team …

She did just about everything as a player at Alleman High School, and Megan Delp hoped she could do the same as a coach for the Pioneers girls…

Assumption comes alive in second half to reach state

ELDRIDGE — Grace Boffeli wanted to soak this in.

ELDRIDGE — There were absolutely no postseason jitters for this group.

GALESBURG — The Rock Island girls basketball team is all about finesse. The Peoria High squad is all about toughness.

MENDOTA — This was what Sidney Garrett hoped for, what helped sustain her during a junior basketball season entirely lost to injury.

Mohawks fend off Warriors to advance to regional final

BELLEVUE, Iowa — Bellevue Marquette got all it could handle Friday night.

Alleman's Avrie Schmidt (24) goes up for a shot against Mercer County's Karli Stineman (20) in Class 2A regional action Monday night at Sherrard.

Alleman's Avrie Schmidt (24) goes up for a shot against Mercer County's Erika Sedam (31) in Class 2A regional action Monday night at Sherrard.