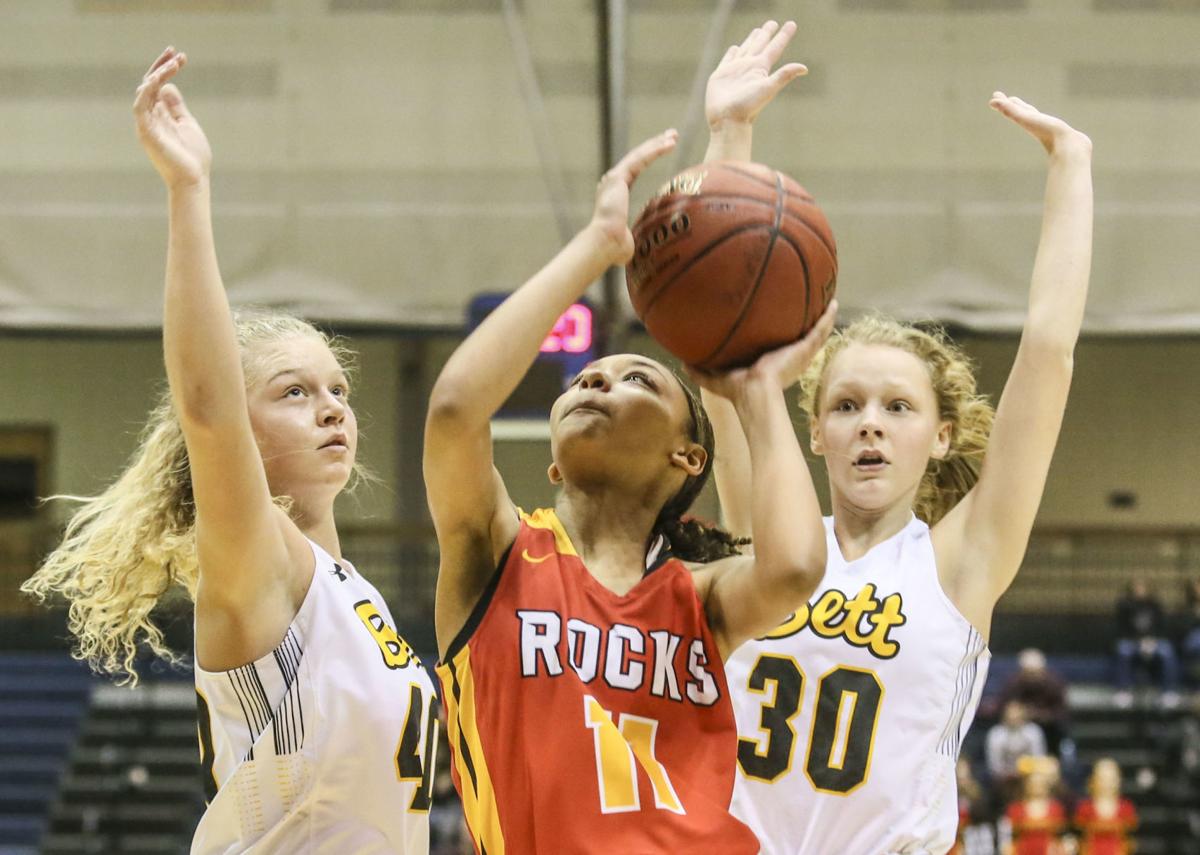 Rock Island's Brooklynn Larson goes up for a shot while Bettendorf's Kaayln Petersen (40) and Izzy Appel (30) defend during the annual IHMVCU Shootout Saturday at Augustana College in Rock Island. 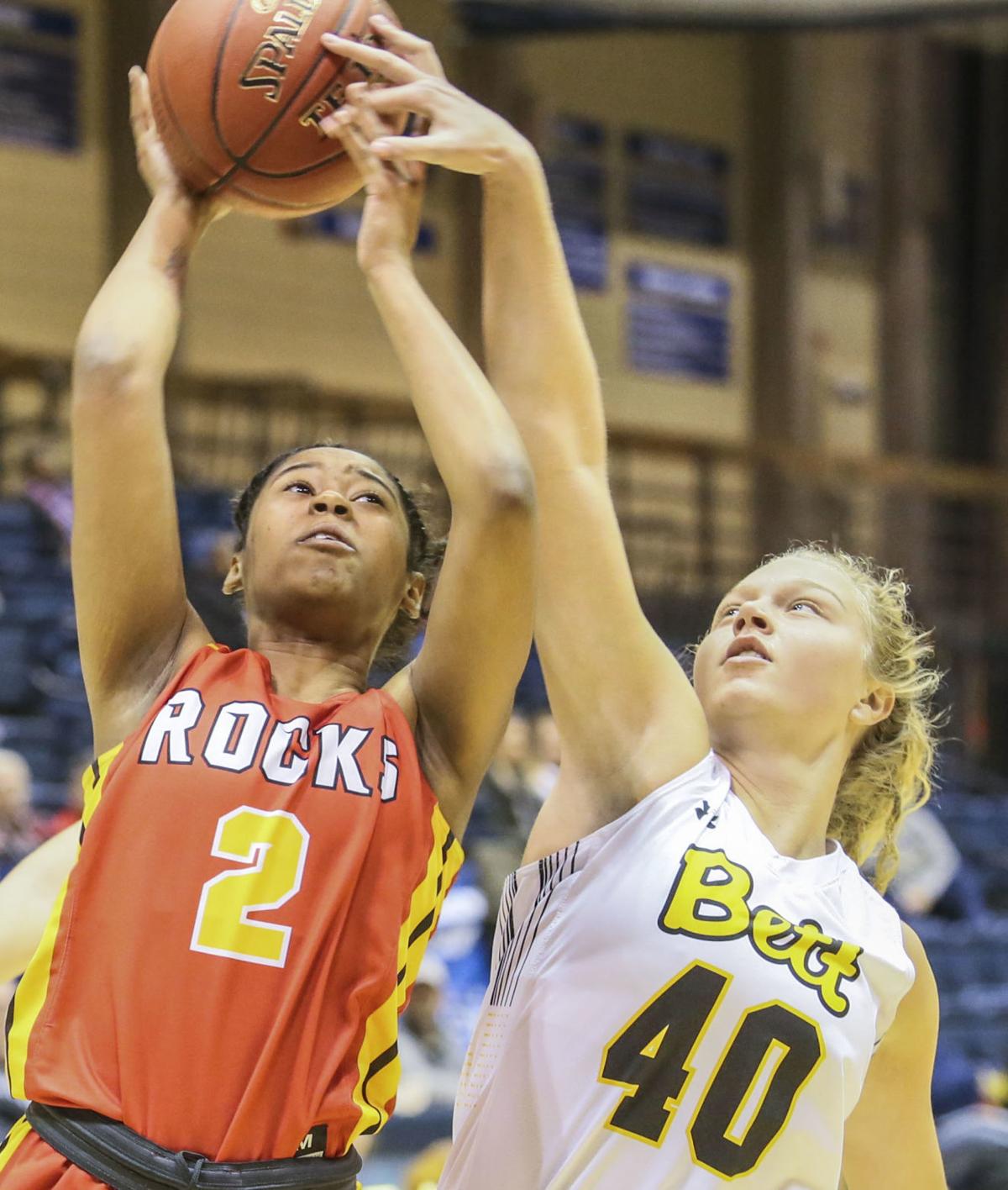 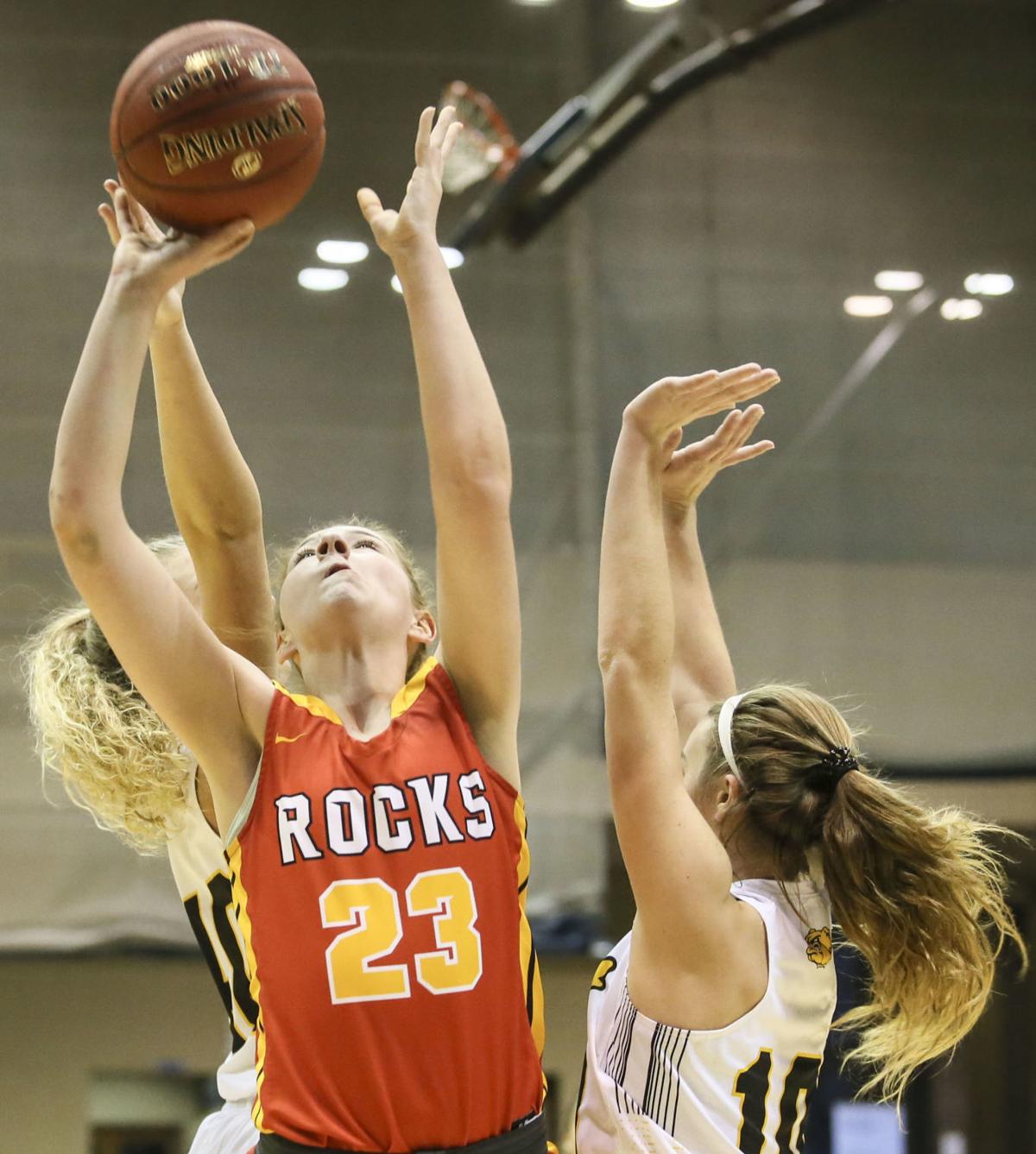 For the better part of the first quarter, the Rock Island girls’ basketball team struggled with the thing that has been their strength — defense.

Then, the Rocks figured out things.

Holding Bettendorf to eight second-quarter points, the Rocks turned around an early deficit to build a nine-point halftime lead and held on for a 63-54 win at the IHMVCU Shootout at Carver Center on Saturday.

The Bulldogs (7-4) scored at will in the opening quarter, both on drives and open 3-pointers, to lead 19-15 after eight minutes. Rock Island (16-6) then found the shooters, defended better in the lane and turned around the game.

“It’s hard when you don’t follow a team and only get to see them on film,” RI coach Henry Hall said. “It took a little while to get started. When we picked it up on defense, we got some stops and then we were able to find some mismatches against them to score.”

Added senior Hannah Simmer, “We used to think offense first and defense second. Now our defense starts our offense. I had to battle against their big girl (Kaalyn Petersen) in the post.”

“We got in foul trouble in that second quarter and had three players on the bench with two fouls,” Tritt said. “No excuses. We play a lot of girls, but when you are playing someone as good as Rocky, you need all hands on deck.”

The Rocks held the lead the rest of the way, although the Bulldogs had a run to trim a 14-point deficit to two. However, Rock Island didn't break.

“I thought we made some nice runs in the third and fourth quarter, but every time we made a shot Rock Island would come back and make a big shot,” Tritt said. “They are really good, and it does take a lot out of you when you have to play uphill all night.”

Hall expects some lulls with his team, but he knows they have found a winning feel.

“One thing we know, these girls are not going to quit,” Hall said. “We find a way to get through adversity, and when it all comes down to the end we got the ‘W.’ We had so many people wondering what would happen after Brea (Beal) and I think we are just fine.”

Simmer, who led the Rocks with 16 points, five rebounds, four blocks and three steals, said it is all about the team believing in each other.

“Our team defense is the reason we are winning,” she said. “We’re not focusing on offense, we are focusing on winning. For me, I love the blocks way more than anything because usually I get called for a foul and then coach Hall yells at me about it.”

The Rocks had no one else in double figures but received nine points from Brooklynn Larson and eight points from Emily Allison. Imari McDuffy (five assists and five rebounds) and Bre Williams (five rebounds) each tossed in seven points and Ella Engholm added six points.

“That’s what we do,” Hall said. “We are just running our offense and usually not looking at one person. Bre is shooting is so well and playing like a senior, Ella played really well, and Imari is Imari. We did run some stuff for Hannah and Emily and that worked well.”

Rock Island's Brooklynn Larson goes up for a shot while Bettendorf's Kaayln Petersen (40) and Izzy Appel (30) defend during the annual IHMVCU Shootout Saturday at Augustana College in Rock Island.